This is a follow up to a story we’d previously published from K. Carpenter about his adopting a dog from a shelter that was ten hours from his home. You can read about the rescue dog and her long drive home here.

Keelan wrote: When I arrived at the shelter she/Scout was happy and excited to meet me. I gave her a new collar. She rolled around and thrashed a bit, but quickly adjusted to it. I talked to the person at the shelter, got the pup’s paperwork and tried to take her for a walk but she just wanted to follow her nose.

I didn’t have the appropriate treats with me and she just wanted to sniff anything and everything. Fortunately, she was interested in the car, and I had left her door open to sniff. We wandered around for several minutes and returned to the car. I lured her into the crate with a bully stick and let her chew it for a few minutes. She seemed to love it. However, since it was just me, I didn’t feel comfortable leaving it with her unsupervised while I was driving, so I tried to trade it out for a carrot. She didn’t like the carrot as much but accepted the situation quickly.

Once we were packed up and ready to go she whined, but only for about twenty seconds.

Ask The Dog Trainer: Follow Up To Long Ride Home 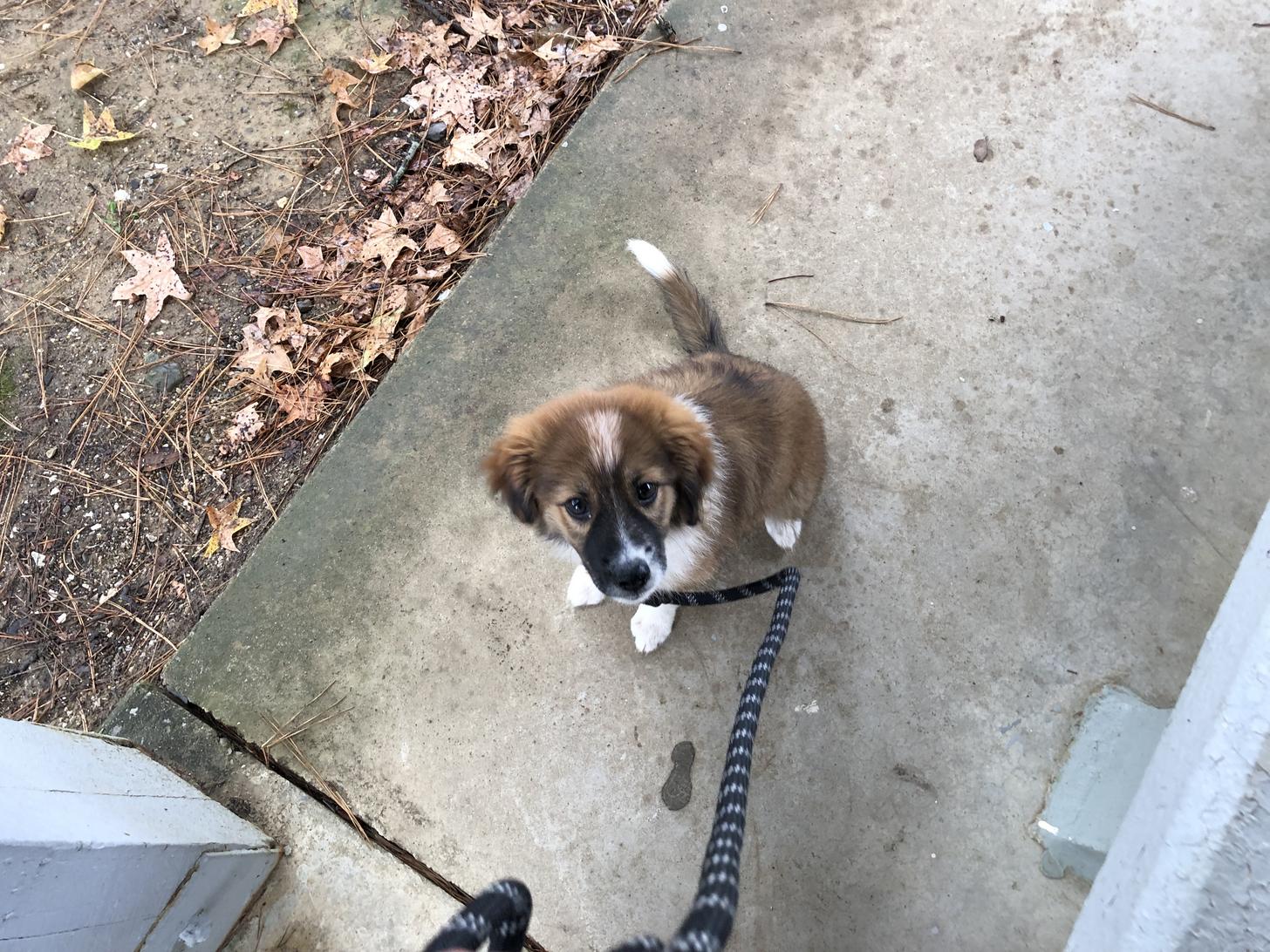 After about an hour and forty minutes of driving, we stopped for our first rest. I went through a drive-through and stopped in the parking lot to let her out into the nearby grass. At some point during the drive she’d thrown up. I guess the Dramamine wasn’t enough to keep her from getting sick. I also didn’t hear it happen, so it was either done in that short time I was walking to the other side of the car or quietly enough I didn’t hear it while the car was dictating texts for me. Either way, I was prepared and cleaned it all up.

Once out of the car, she pulled on the leash a good bit, but eventually settled down. I gave her water and waited about 20 minutes before leaving again. She had zero interest in the bully stick this time, so I put her front two paws in the crate and then she went the rest of the way on her own. She only whined for just a couple of seconds this time.

A couple more hours of driving and I stopped again. This time at a rest area right off the interstate. It had a section just for dogs and we had it all to ourselves. This time she anticipated me getting her out and was more cooperative with the leash going on. She also was able to climb down herself and head for the grass.

This stop really excited her nose as even though it was empty I’m sure there were plenty of dog scents left behind and she was quick to follow lines that I was not able to see from tree to tree. I tried to work on walking again and have her follow, but this just led to her getting upset with the leash and a lot of me standing still while she experimented with the boundary this created.

She improved a little on stepping over the leash and exploring within the boundary. After a while she was yawning when it appeared she was over the attempted lesson. I stayed for another twenty minutes, but again, no urination or defecation. On the way back to the car she saw some other dogs and the bully stick she loved at the beginning of this trip, she couldn’t care less about now.

She slept for the rest of the trip and once we were about fifteen minutes from home, she woke up and vomited again. This time I heard her. It doesn’t sound nearly as violent as one of our cats regurgitating their food, so there’s that. The crate was big enough she was able to just lay back down without being near it so we just powered through and went the rest of the way home.

Once home I let her climb out and then out into our front lawn. I then had my wife prop open the storm door and front door. I then walked her inside at her own pace, but made sure she was following me when first coming inside. Then we let her explore just a tiny bit of the living room before she decided she’d rather meet her new family. I was proud of how calm my son was able to stay and after a short introduction and petting session,

Scout was back outside to explore. After about thirty minutes she was acting more relaxed and my wife handfed her according to the protocol in the book, or as best she could manage. It went well. 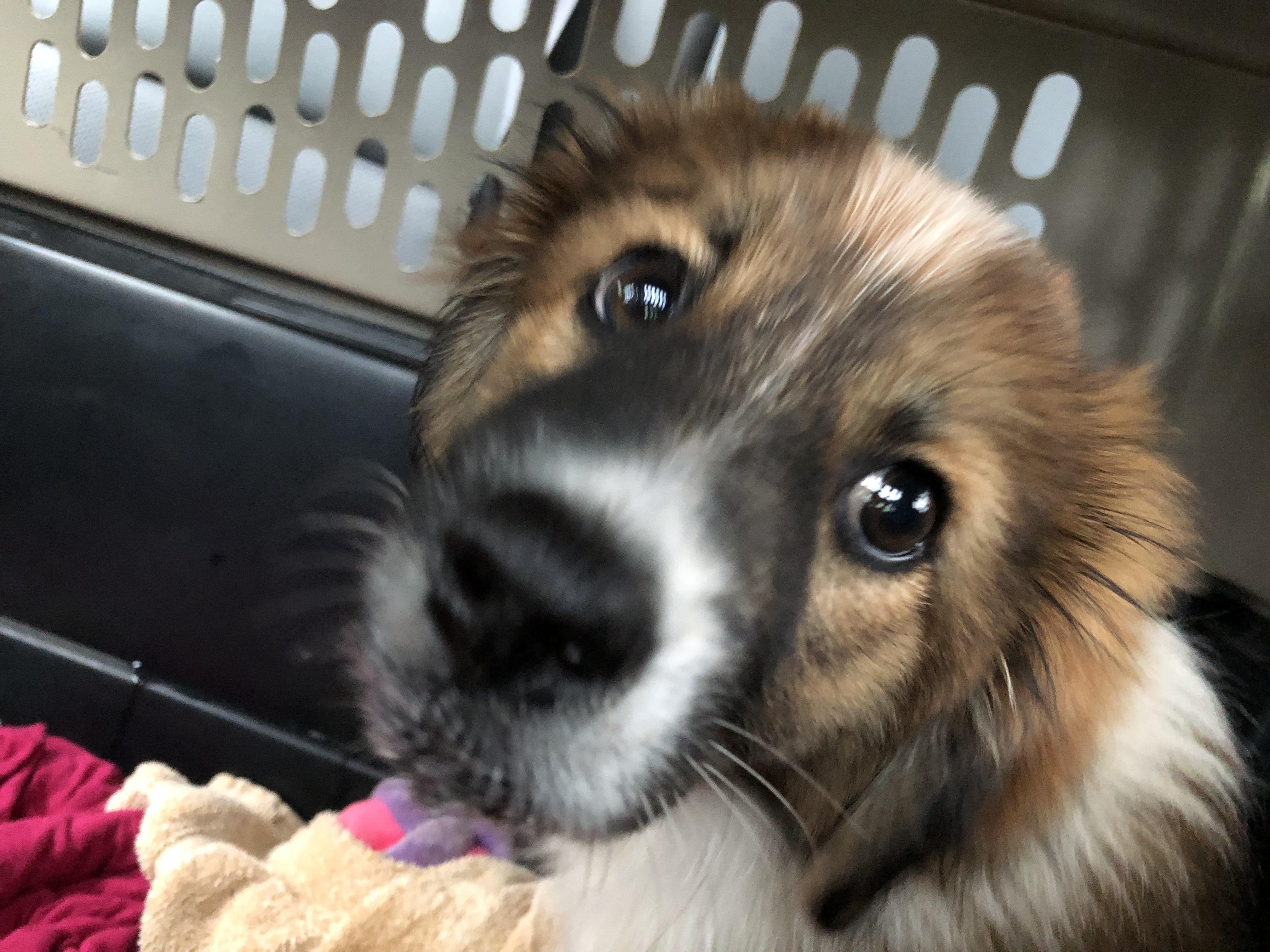 Once back inside we tried to let her off the leash but keep her in the half of the living room by the front door. She picked up on the boundary I set, but it was difficult for her as she was listening to my son’s bedtime routine happening off in the distance on the other side of the boundary. For the rest of the night, we used the leash to help enforce the boundary. I then took her to her crate (the same one she rode in) with some treats. She must have been feeling much more comfortable as treats were now appealing to her. She was showing signs of aversion to the crate and didn’t want to go in, so I instead just dropped the treat in front of the crate. That worked and then I put a treat in her crate, but it was too far in and she wasn’t willing to go in for the treat and quickly started looking elsewhere for something fun. I got her attention again with a treat and this time just barely put it inside the crate. She found that to be acceptable and grabbed it and took it back out. We then moved on and I took her back outside.

The neighbors came by to see her while she was in the back yard. Scout started picking up on the look I was giving of, “come follow me,” and did much better with the leash after a day of trying. Then back to inside and back to the crate. This time I just put her front two paws in, but let her walk in herself. I shut the door and sat next to her. She whined for several seconds and I just looked forward and talked to my wife and Scout burrowed into the towel we put in her crate and let out a sigh. I tried walking away for a few seconds to grab a paper towel as we seemed to have tracked in a rather large snail. She wasn’t phased, so I left a bit longer to put the snail back outside and she didn’t care then either. I’ve then left her for more than half an hour and hadn’t heard a peep from her. However, still no urination or deification.

I took a twenty-minute break and took her outside and still no bathroom. She wanted to play with her leash as if it were a toy, which I redirected, but no apparent urge to use the bathroom out in the lawn. I’ve also checked her crate and it is still very clean. On the plus side, she eagerly followed me through the pitch-black house to the front door and back inside once the twenty minutes outside was over. Also, it was interesting to note she still has no interest in the bully stick even though she was clearly loving it in her crate at the beginning of this trip. I also tried practicing marking by saying good as soon as she sat down. I don’t know if it was worthwhile without treats, but I felt like it was still good practice for picking up the timing and her body language.

Editor’s Note: We love follow-up stories and the successes rescue dogs find in their forever homes. Thank you, Keelan and family, for your love and patience!