Melody shared that when she was in the sixth grade (in 2010) she lived next door to a family who had two kittens — a boy and a girl. “I took the girl (Boo),” Melody said. “At the time our family had two dogs and four cats.” Melody remembers that as Boo grew older she was “wild and kind of mean” and that she got along with a stray cat the family took in, but didn’t get along so well with the family.

(Read the rest of the story below)

“Over time Boo stopped playing with the stray and she would disappear for days; days turned into weeks, weeks into months until eventually she stopped coming home,” she said. “I remember being very upset she would get herself into trouble and play in the road and end up getting killed, I remember how skinny she was even though she always had food at hand.”

In 2013 Melody’s parents split up and not too long after that, one of her cats got pregnant. “We had three dogs and six cats living in my dad’s home at one point.” Melody hadn’t seen Boo in more than a year when suddenly, one day she just appeared on the porch. It was a winter day. “I kept her in my room for the winter, and once the snow was gone she left. The next year she came back around the same time and left again in the spring.” Two years then passed and Boo didn’t show up in the winter.

“In September 2016, I was starting my senior year of high school.” At that point, her dad only had one dog — one they’d had when Boo was a kitten, one of the dogs that Boo didn’t get along with. “Our house seemed pretty empty at that point after my childhood dog died, and my favorite cat (one of the kittens of my pregnant cat) died. I decided to get a dog who lived at my mom’s house.”

It was in the winter of 2016 when Melody’s boyfriend drove her home from school and she again found Boo waiting on the porch, asking to be let indoors. “I kept her in my room for until she was comfortable enough to venture out. She was twice her size, so clearly she was well 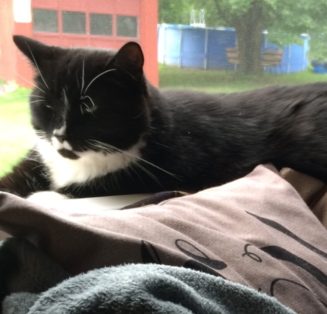 taken care of during the time she wasn’t with us. Boo became quite friendly with the family dog. They’d been together as babies, but didn’t get alon.” Melody believes it’s because the puppy was now a grown dog and was calm and that is why Boo liked her.

“It did take a while for Boo to get accustomed to my Lab, but he’s still a puppy,” she said. “Now they get along well.”

Boo has been at Melody’s dad’s house for more than a year now and “seems to be very happy!” Melody said, “It is possible she didn’t like how many animals we had in the house and that’s why she kept leaving. Now there are just two dogs and she really enjoys herself.” Melody said that Boo is, “an odd cat, not a lap cat at all, but she’s funny and different and I really like that about her. It is 2017 and she is still around, and I really hope she stays.”