Linda Raszick, Edison’s “mom” said she was working at a ranch in Southern California and had been hearing a bird crowing all day long. “The temperatures were in the high 90s all day and it wasn’t until about 4:30 pm when I finally spotted a cat at the very top of a power pole.” 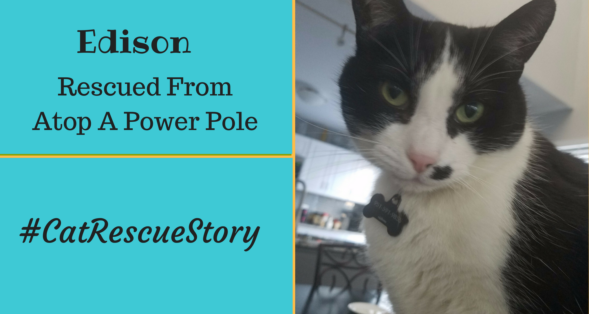 The poor thing had been up there all day, she said. “I called animal control to come and help him, but they wouldn’t.” She then called the fire department and they wouldn’t help, either. “Finally at 6:30 pm i called the power company, and after a lineman came out, he called four trucks that had extending  buckets. They shut off all the power and went up there and rescued the cat,” she said. “I was so relieved.”

Linda took the cat home that night and named him, Edison. “That was six years ago and he is the best cat I have ever know,” she said. “We love him dearly and he loves us.”