We received this story from Apple. She and her son, Tristhan, reside in Guam, a small island of Marianas. Luna is their first cat and here is their story.

“When we had Luna it was one of our happiest moments,” Apple wrote. 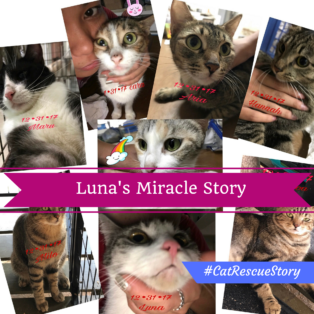 Luna grew up and had three babies of her own — two males and a female. Apple wrote, “I knew I could not afford to keep them all and had a hard time making a decision. I came to my senses and knew if I gave them away to a shelter they would all be put to sleep if they didn’t get adopted.”

Apple also felt that if she let someone else adopt them that they wouldn’t take as good a care of the cat family as she would so she did the only thing she could. “I decided to keep them all and it was fun!”

As it happens, though when cats aren’t spayed, some of Luna’s kittens had kittens of their own. Also, what sometimes sadly happens is that a kitten will pass away. Apple wrote, “Unfortunately one of the cats past away and I was so depressed. I had him cramated because I loved him.”

They now have eight cats and she did let one of the kittens get adopted to a family who keeps Apple updated on how the kitten is doing. “She is in a very loving family and that makes me so happy,” Apple wrote.

Apple said she will do anything she can to keep her cats and kitten safe. She will always choose them — no matter what, she said. “They will go wherever we are. When I get a house of my own I will get a house large enough to be a home for my cats and for strays and ones from the shelter that I can rescue and save,” she wrote adding that. “I want to give them second change at life. Because they can’t work like we do.”

Thank you for caring for your cats and kittens, Apple.