Annabelle Buckner shared her Cat Rescue Story with us and here’s what she wrote: “I wanted a cat since I could think, but it was never the right time. Shortly after I moved in with my boyfriend, we heard of an abandoned three-week old kitten. We didn’t have any prior experience with cats and I used to dream of a British Shorthair, but it seemed to be fate, so we adopted him.”

The kitten, Mr. Mau, was way too young when he became part of the family, she wrote. “There’s a critical period in kitten development — between four and fourteen-weeks of age— when a kitten’s personality is shaped by his or her experiences. During the time with their mother and litter mates, kittens learn important lessons such as bite and scratch inhibition — how to use their teeth and claws cautiously — as well as other perceptual, motor and social skills.”

Mr. Mau did not get this opportunity. He learned most of what he knew from us. So, slowly, he started to act like a little human. He slept on his back, went to cafés with us and had breakfast with us at the table. “He literally sat on a chair with his paws on the table! Spending time with him was such a blessing,” she wrote. 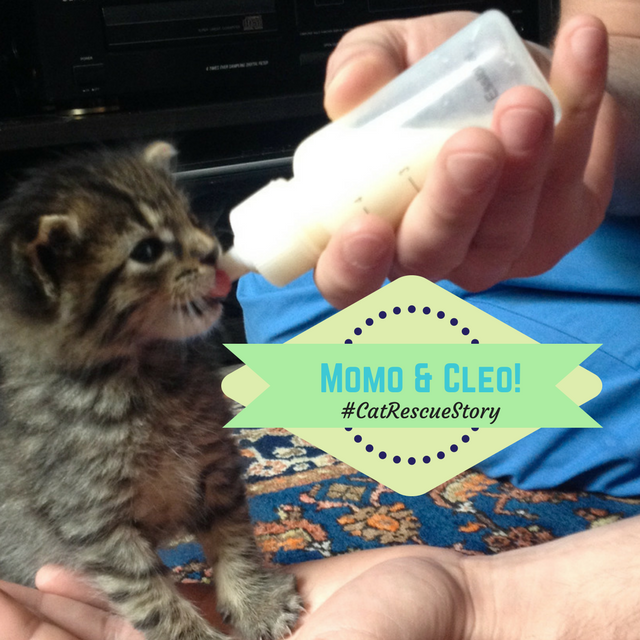 Sadly, one-and-a-half-years later he got hit by a car. “Coming home to an empty apartment was too much to bear, so we went to the shelter for the first time,” Annabelle said.

Momo had been found emaciated, roaming the streets with a gift ribbon around her neck. She was battling the flu but seemed very interested and curious. “We instantly fell in love with her, took her home and nursed her back to health. She’s a little diva, strongly voicing her opinion. Once she trusts you, she’s the cutest little snuggle bug though. She eats things like plastic, ribbons and human hair so we couldn’t let her go outside by herself. We couldn’t leave her alone all day while we were gone either – so we went back to the shelter to get her a sister,”

Cleo had been found in a parking lot. She was only ten-weeks-old and had crushed hind legs, so she had to wear an external fixture for about two months until her bones grew back together.

“The vets really did one hell of a job,” she said. Her hip is a little underdeveloped and she can’t sit properly – other than that, she’s healthy and good-spirited. Cleo constantly asks for cuddles, meowing until you drop everything to give her the attention she wants. “Sometimes I even feel her curling up on top of my head at night to sleep on the upper part of my pillow, right next to me.”

Annabelle said, “Seeing how well both cats seem to do with us warms our heart every single day.”

Who knows where these kittens might have ended up if they hadn’t been adopted? “On the other hand, it saddens me to think about all these animals still sitting behind bars, waiting to be loved,” she said. “Shelters are overcrowded, but they are full of healthy, sweet and smart animals who were surrendered not because of their behavior but generally due to the issues of their guardians.”

Editor’s note: We love Annabelle’s final sentence in her Cat Rescue Story: “Visit your local shelter before buying a cat. You might find the perfect cats – like we did!” Amen!

Do you have a cat or kitten rescue story? We’d love to hear it.