Some things just go together: Peanut butter and jelly, meat and potatoes, cats and rappers. Wait! What? You read it right. Rapper IAmMoShow has taken his talent for rapping and his love of cats, combined them and is raising awareness of cat adoption by showing the world the love he has for his own cats! His videos are on the verge of “breaking the Internet” and are being shared far and wide!

I had the honor of interviewing IAmMoShow because I’d fallen in love with his videos, had been cyber-“stalking” him and decided to take a chance and see if he wanted to talk. He did and it was incredible — his story, his love for cats and the work he does with the Oregon Humane Society.

Read the rest of the interview below the cat bath rap video. Scroll to bottom to see his official cat rap video.


IamMoShow: Find him on social

Full-time rapper, IAmMoShow, has been involved in the music business since he was sixteen-years-old. Baltimore born and raised, he now lives in Portland Oregon.

When did you discover your love of cats?

He said, he always loved animals, but never had any when he was growing up. “My family just didn’t have pets. Mom and dad were allergic so I grew up in a house with no animals.”

He explained that Queenie, a black cat, “adopted” him. “When I first started going to my girlfriend’s house, Queenie would sit next to me while I studied. As time passed she would wait for me at the door, then she’d sit on the table when I was working on my laptop,” he said. “It was love. That was when cat love hit me and now it consumes me.” 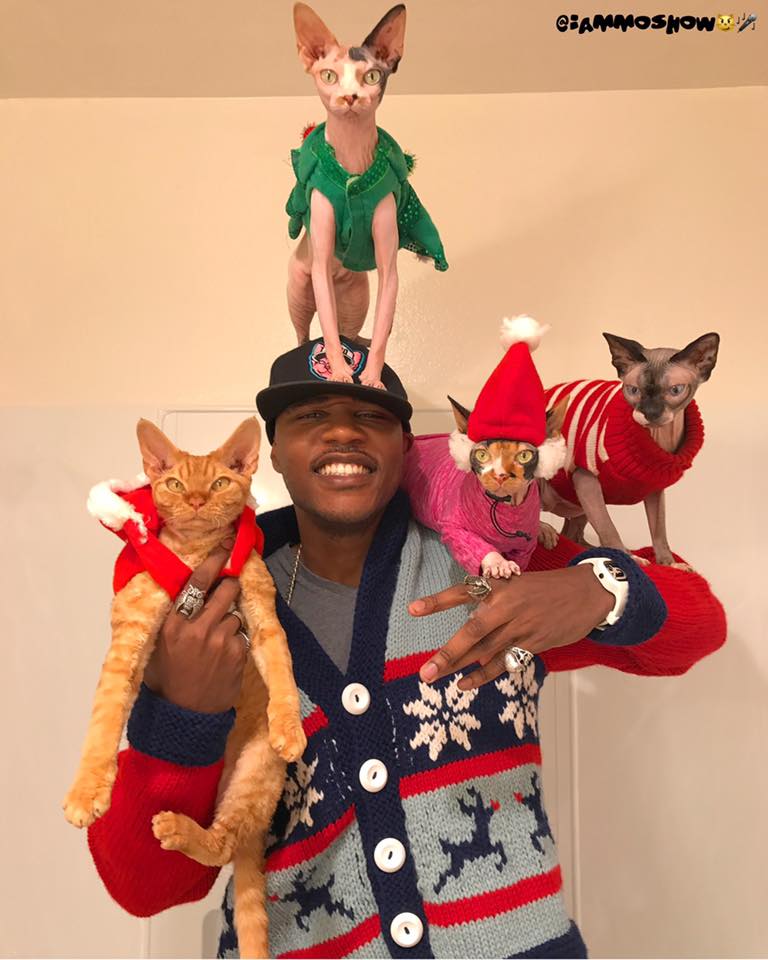 Queenie, who passed away recently was nineteen-years-old and had been with his girlfriend since she (the girlfriend) was six-years-old. “It was a devastating loss for both of us.”

Since then he has six adopted cats that live in Delaware with his in-laws. He and his girlfriend, who live in Portland, have three Sphynx girls, Megamam, Tallie and Sushi. Megamam and Sushi are sisters from the same litter – Megamam is their mom. They adopted a Devon Rex, Ravioli, about one year ago.

Why rap about cats?

“It’s hard for me to answer that,” he said. “It’s not like I was sitting back and started thinking, ‘hhhmm I should rap about cats.’” It didn’t happen that way. “I was thinking one day about how I love rap and I love cats and now I’ve become the cat rapper.”

IAmMoShow (that’s the best way to know him and find him on social!) said, “I’m not a gangster rapper. I don’t disrespect women. I stand for peace, love, positivity, loving cats, cat guys, being proud of who you are and being the best you that you can be,” he said. “I know who I am as an artist and as a cat guy. I stay true to myself and to what I believe in.”

He has a “big friendship” with animal shelters in Portland and works with the cat adoption team at the Oregon Humane Society. “I’ve worked with them to raise awareness and helped raise money for their events. I am highly tied in with the Portland cat community,” he said.

“I want people to know that I wake up every day trying really hard and putting my heart into this cat life I’m living,” he said.

He shared that he was, “A kid born and raised in projects of Baltimore City. I was told I wouldn’t’ make it and would probably be dead at a young age. I worked hard. Graduated high school. Paid my way through college and graduated with a computer science degree.”

Today he is changing the world with his music and bringing smiles to people’s lives. “Don’t give up on yourself. Never give into what people say you can’t do,” he said, adding. “And love cats!”

A great message to live by!

Please enjoy the videos and pictures that IAmMoShow gave me permission to share here. Go to his social pages to find out more and watch more of his videos.