Alexa Hess wasn’t sure what her parents would say when she rescued a tiny, sickly, flea-covered kitten from a farmer’s market, but she knew she couldn’t leave this kitten behind. She and her friend were at a local farmer’s market and there was a box with kittens in it. Alexa felt herself drawn to the tiniest, scrawniest, sickest-looking kitten in the bunch and made a decision from which there was no turning back. “I asked if I could take him and the lady said yes,” she shared. “I didn’t even tell my parents, but they’ve always loved pets so I didn’t think they’d really mind.” 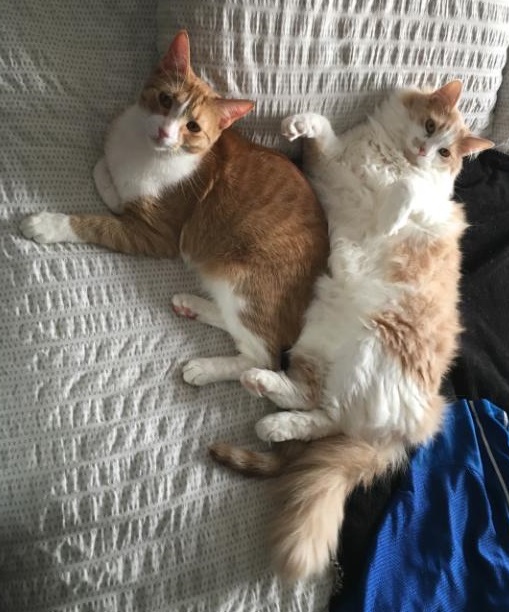 ept him in her bedroom, not telling her parents about him until she’d had him for a few days. His eyes were crusted shut, he was being chewed by fleas and had diarrhea. After telling her parents, they called their veterinarian, got the kitten an appointment and got him on the road toward health. The kitten, who Alexa named Clyde, grew and grew into the more than fifteen pound cat that he is today. He remains attached to Alexa, following her around the house like a dog and sleeping next to her in bed at night.

Alexa and her boyfriend, Cody, moved into an apartment and were feeling bad that Clyde was moved out of the only home he’d ever known and that he had left other cat siblings behind at Alexa’s parent’s house. She and Cody decided to find a brother for Clyde. Because they know the importance of rescuing from shelters and giving them forever homes, they visited a local shelter, fell in love with Rudy and brought him home. This kitten, too was small, flea-infested and sickly. Loving and vetting turned his health around and now he and his rescue brother, Clyde, are inseparable.

Alexa’s mom (our Crimeless Cat and #CatRescueStory editor) is proud of her daughter for her kind heart and the loving home she provides her rescue kitties.