According to Krista Brown, Stash showed up a few months after moving they moved into their first home.

“She was a small little cutie and so very sweet,” Krista said. “Although she is timid around other people, for some reason she came straight to me. I knew if I fed her there would be a good chance she would stick around.” 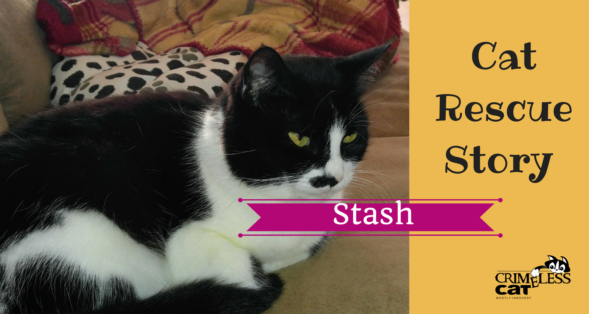 In the beginning, Stash wasn’t allowed into the house so Krista would put food out for her.  One night, though, “‘Mr. Racoon’ caught wind of their being ‘free food’ and he would steal her food. Stash started coming in for meals then would go back outside.”

Krista said, “You can see where this is going, right?”

After a few months they thought that Stash might be pregnant so they took her to the vet. “Turns out she was just a fat two-year-old and she’d already been spayed!”

As the seasons changed, Stash became an indoor kitty at night and would go back outside during the day. Now, though, “My husband will let her in when I’m sleeping (nightshifter) so she can cuddle me,” Krista said. “Our dogs only try to chase her every once in a while, but Stash quickly learned to stand her ground and stop them in her tracks.”

“We just adore this little ball of cuteness who showed up on out porch.”

We are thrilled you opened your heart and home to this beautiful kitten!

Have you rescued a cat or kitten? Please share your story with us!