Our editor, Robbi Hess, was a VIP guest at the Dog Film Festival in Rochester, NY at the Little Theater. The festival, which was open to pet parents and their dogs, was the first time The Little had opened its doors to four-legged patrons. Lydia Primakov, special events assistant, said “We’ve never done an event like this but we have such a large animal loving community that we were thrilled to participate.” 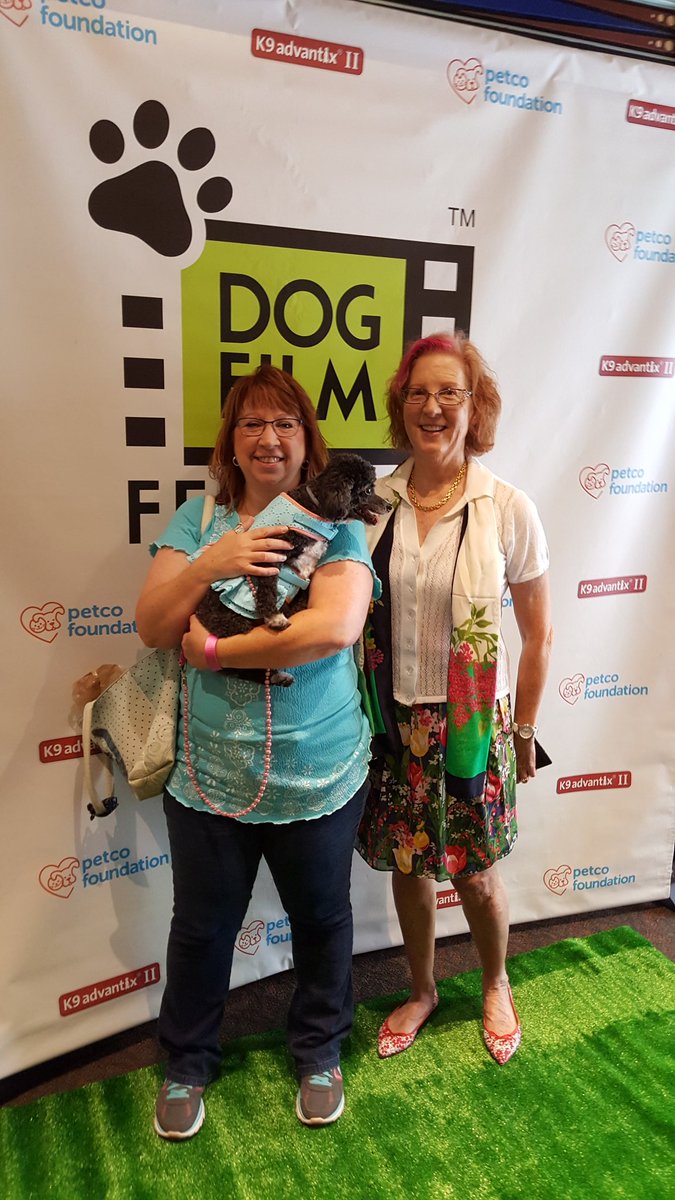 Well-behaved dogs and their parents arrived early and milled about in front of the theater waiting for the doors to open. When they opened, they were greeted by Lollypop Farm representatives and the President and CEO, Alice Calabrese. Those with their dogs posed on the “green carpet” and those who came to the festival without their pets were given the opportunity to pose with the “invisible dog.”

The theater was full of pet owners and their dogs — many of the dogs hopped up and grabbed a seat for themselves or sat on their owner’s laps. The usual “turn your phones to mute” warning was absent; makes sense as the dogs were occasionally barking and there was a lot of panting and whispering to the dogs going on.

Tracie Hotchner, Radio Pet Lady Network, was the driving force to making this nationwide event a reality. The Dog Film Festival is touted as, “A celebration through film of the love between dogs and their people — and the animal welfare groups that bring them together.” Lollypop Farm was the recipient of a donation from the Rochester event.

Background on the nationwide event:

Following a sold-out success in New York City, the first-ever Dog Film Festival is touring the country, stopping in 12 cities. The festival celebrates the bond between dogs and their people and will benefit the Lollypop Farm in Rochester with its July 17 stop. Fifty percent of ticket sales and a 10,000-bowl donation of natural pet food to help provide aid in the community from sponsor Halo, Purely for Pets and Freekibble.com

The festival, perfect for dog lovers of all ages, is comprised of two separate programs of entirely different canine-themed films. Each screening includes documentary, animated and live-action shorts that illuminate the human-canine bond, submitted by dog-loving filmmakers from around the world. Each screening is approximately 90-minutes long.

The Petco Foundation, whose goal is to help every animal live its best life, is the national Presenting Sponsor of the festival.

“We are thrilled to help bring the Dog Film Festival to cities across the country,” said Susanne Kogut, executive director of the Petco Foundation. “This series of films visually relay the Petco Foundation’s core mission to create a better world for animals and the people who love them. We are excited to celebrate with all dog lovers during this fun-filled festival and showcase these wonderful films that demonstrate the positive impact dogs have on people’s lives.”

The first program features a medley of light-hearted, animated and narrative shorts, perfect for any attendees, including children and families. Renowned photographer William Wegman’s 30-minute film, “The Hardly Boys in Hardly Gold,” starring four of his own Weimaraners in costume, will be highlighted at the first screening. Other fun and uplifting feature films include “The Lewis Lectures,” a hilarious depiction of what dogs are actually thinking; “Beta,” a delightful tale that answers many questions we’ve all had about dogs; and “Useful Dog Tricks,” an inspirational short about the myriad ways a dog can help around the house.

The second screening features a more sophisticated program that includes a series of short documentaries, narratives and subtitled narrative films. This screening is also appropriate for all ages however subtitles may challenge younger viewers. Films in this screening include “Dog Years,” a witty voice-over of a dog who questions his relationship with his frequently absent owner; “Second Chances,” a PBS film about dogs who are paired with incarcerated women, who train them to become service dogs; and “David & Goliath,” a period film based on a true story of a Jewish resistance fighter fleeing from the Nazis, who takes refuge in a dog house where a German Shepherd saves his life.

“We are very excited that the National Dog Film Festival will be making a stop here in Rochester,” says Alice Calabrese, president and CEO of Lollypop Farm. “The funds raised from this great event will go towards the food, shelter, veterinary procedures, and compassionate care for homeless and abused pets in our community.”

The festival is a way for founder and animal wellness advocate Tracie Hotchner to share her love for dogs and give back to organizations working hard for pets in need. 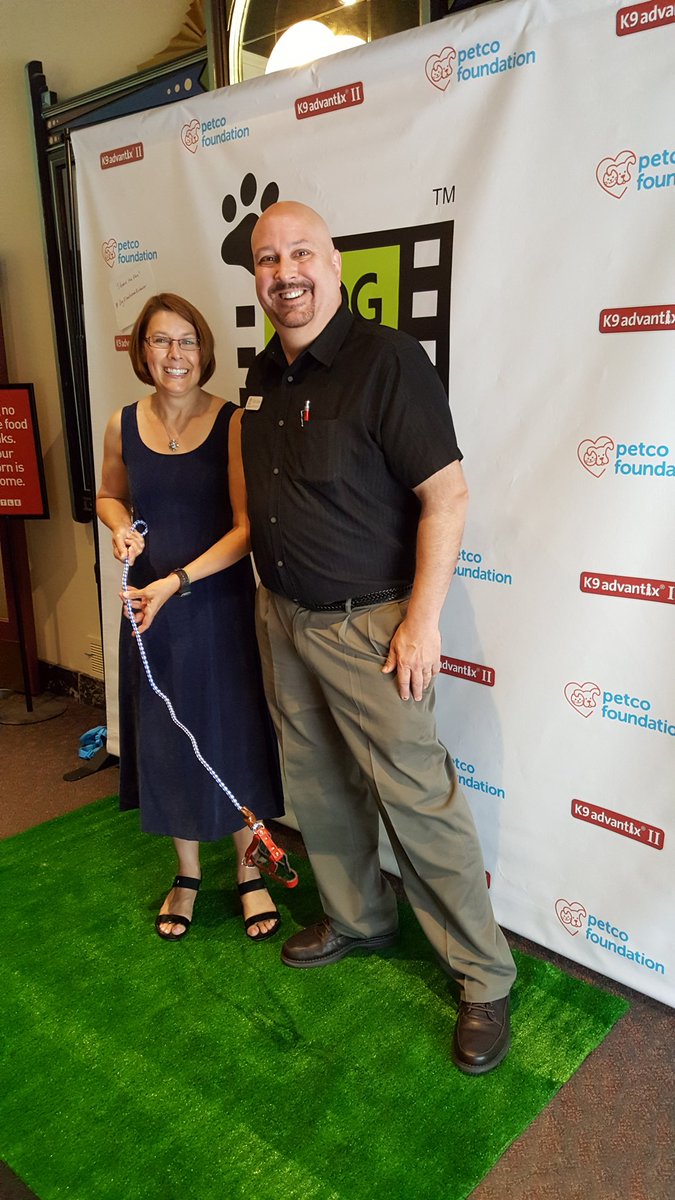 “We are excited to bring animal lovers together to experience the many ways our lives are enriched by dogs and to honor the animal welfare groups that bring them together,” Hotchner said. “I am honored to have a prestigious philanthropic organization like the Petco Foundation as our Presenting Sponsor and to partner with incredible organizations in each city we visit.”

About the Dog Film Festival In 2014, the first Dog Film Festival™ grew out of Tracie Hotchner’s desire, as a pet wellness advocate, to expand her Radio Pet Lady Network’s outreach to educate the public about adoption, pet wellness issues and philosophical aspects of pets in our lives. The festival is a unique way of honoring dogs as true family members by bringing together like-minded people to experience and celebrate the remarkable human-canine bond. The Dog Film Festival™ shares proceeds from its ticket sales with local shelters and rescue partners wherever it travels.

About Lollypop Farm, Humane Society of Greater Rochester Established in 1873, Lollypop Farm is the largest animal welfare organization helping pets and people in the Greater Rochester area. The Humane Society is committed to building lifelong bonds between people and animals through education, community outreach, and the prevention of cruelty. With a main campus located on 136 picturesque acres in Fairport and four other adoption centers throughout the community, the organization provides shelter, care, and adoption for dogs, cats, small animals, birds, reptiles, horses, and other farm animals. Lollypop Farm is an independent nonprofit organization supported solely through contributions, grants, investments, proceeds from retail sales, and fees for programs and services. For information and to meet current animals available for adoption, visit Lollypop Farm.