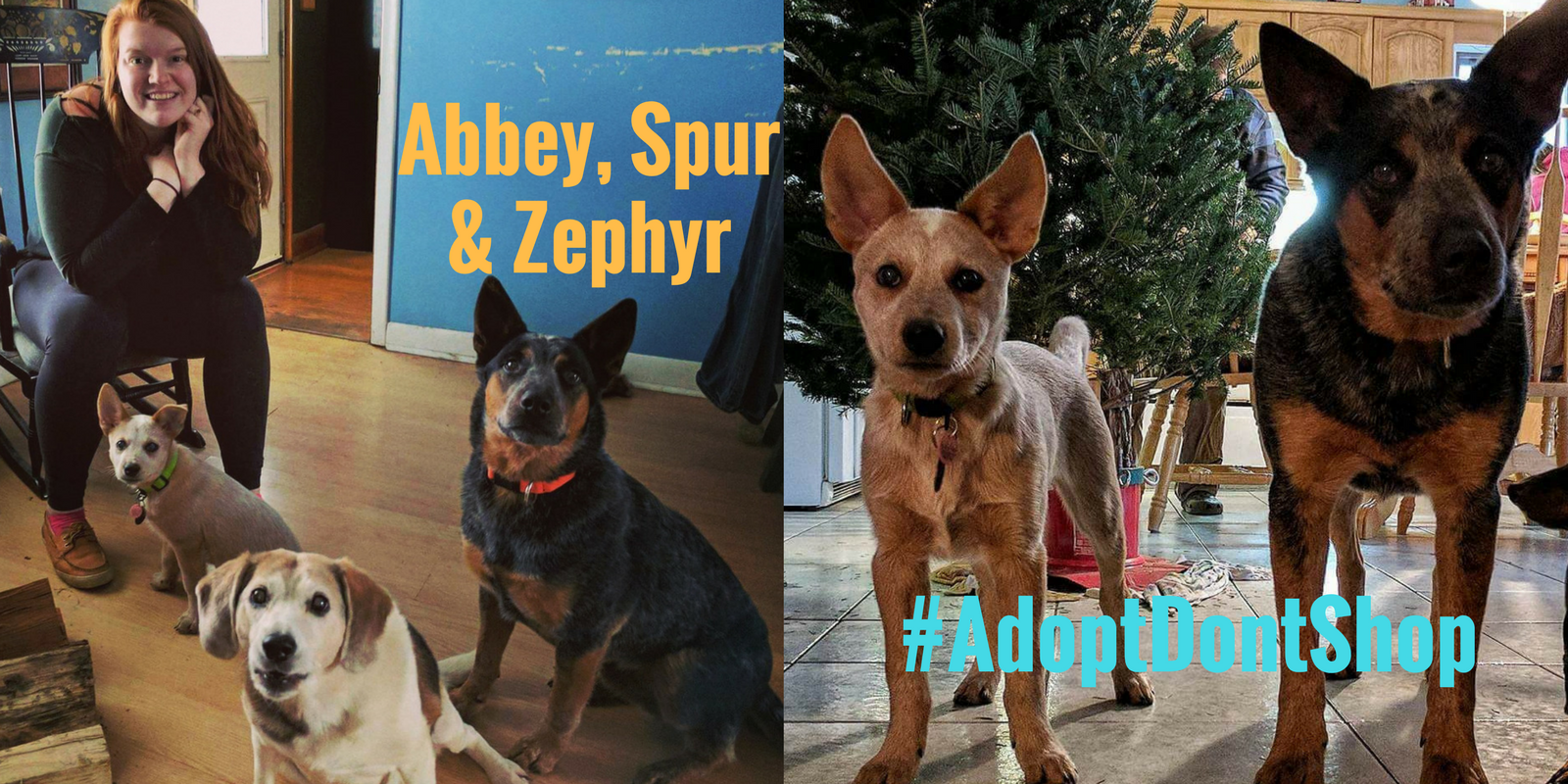 In May 2006, we adopted our old girl, Abbey, (a Beagle) from the local Humane Society. She was supposed to be three at the time, but we later found out that she was actually six years old. We had her for 13 years before she passed away at the age of 18. In September of 2016, we found out she had a heart tumor taking over her entire left side of the heart. Not wanting to risk surgery on a dog who was so old, we decided to let her live her days out (what the vet estimated she had left), but days turned to weeks and weeks turned out to be three months. She had a puppy’s personality up until December 16, 2016 when she passed away. We came home from dinner and found her on the couch, where we believed she died in her sleep.

In March of 2014, we adopted Spur (Blues Heeler) from a breeder who had no more use out of him, as he was already neutered. From the moment we got him he wiggled his way into ours and everyone else’s hearts. I was going through a bit of depression at the time, as it was my first year away for college, and I was three hours away from home. Spur saved me. He brings a smile to everyone’s face that he meets!! However, on August 23, 2017 he was hit by a car. Seeing him there with his leg basically torn off — my heart shattered. When we got him to the vet, they took a look at him and let out a huge sigh. I turned to my boyfriend and said “we’re going to lose our dog tonight”. The thought was heart wrenching. Me, not being able to have kids…it was like we we’re losing the only thing close to that. The vet was able to stablilize him enough so we could take him to an emergency hospital a few hours away. There we learned he would lose his leg. It’s been a tough month, but spur is striving as a tripod, and still helps us heard the sheep.

On November 10, 2016, we adopted Zephyr (Red Heeler) from a couple who had a mistake litter. From day one he has had the typical Cattle Dog attitude and has challenged our abilities as dog parents and trainers to the core. He bonded very strongly with our other two dogs, and at times can be” herd bound,” but he has the most loving and loyal personality I’ve ever seen in a dog. He stays true to his “one person ” dog title that heelers often get. He recently turned one on September 15, 2017 and we’re looking forward to many many more years of growth and love from him.

All our animals have been rescues, including our deaf barn cat that we brought inside – and we wouldn’t have it any other way! Rescuing animals fills us and our home with so much love and joy!!