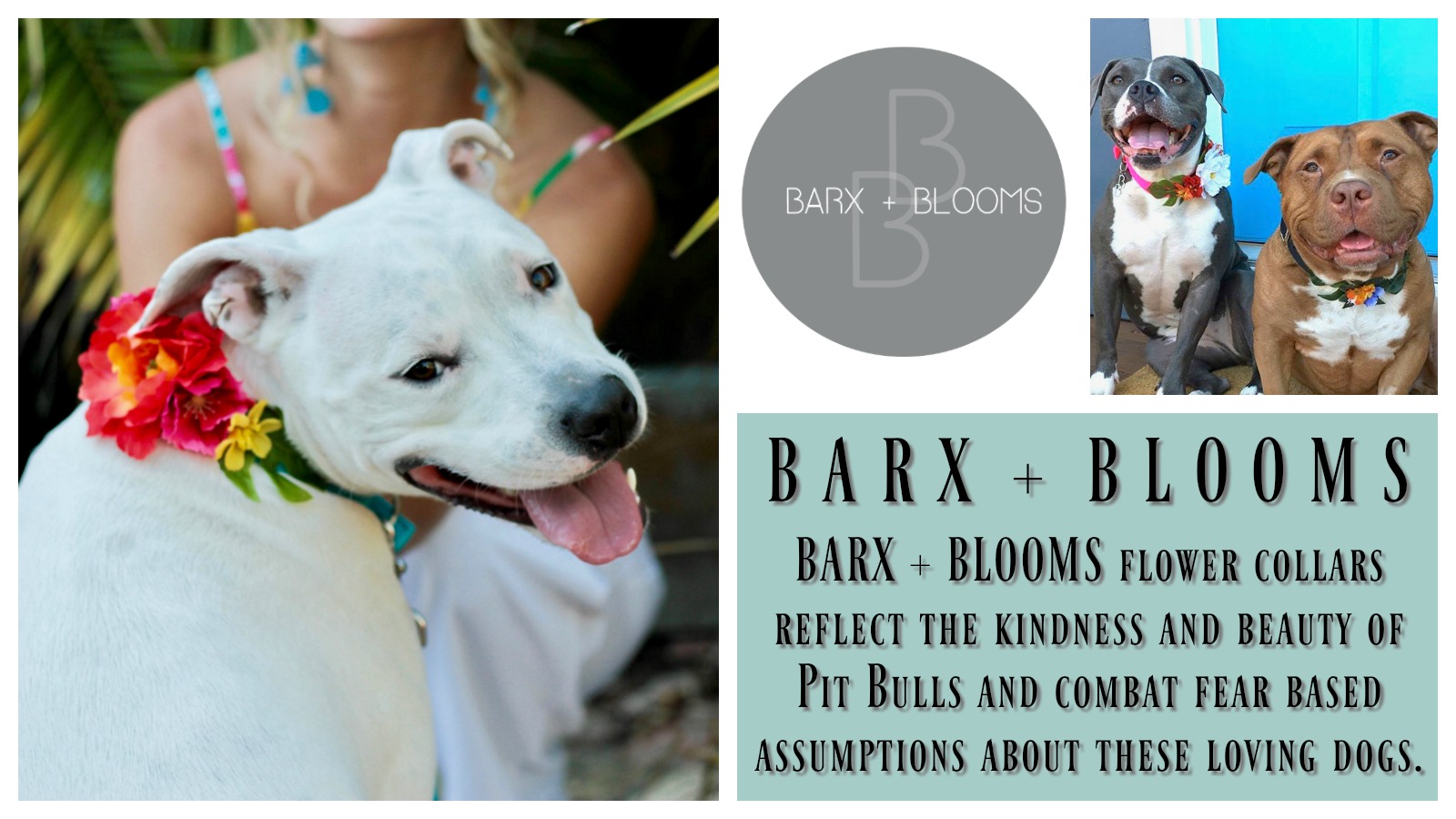 BARX + BLOOMS
BARX + BLOOMS is a San Francisco based company that designs insanely beautiful and high quality collars that help change perceptions of misunderstood breeds; namely, the beloved Pit Bull. Their Flower Collars reflect the kindness and beauty of Pit Bulls and combat the fear-based assumptions about this special breed. Above all, they want to grant these misunderstood dogs an opportunity to show how wonderful they truly are. In support of their effort, they donate 10%  of proceeds to a new bully breed rescue every month. You can purchase a gorgeous Flower Collar and Matching Lead at www.barxandblooms.com. For the month of August, 10% of all purchases go directly to Fresno Bully Rescue!  Check them out at www.fresnobullyrescue.org.

The issue of Pit Bull Discrimination and Abuse is complex and painful. BARX + BLOOMS tactic in combating this devastating issue is by shining a positive light on Pit Bull type dogs and showing the world who they truly are. Two of their mantra’s are “Leading the Way with Beauty” and “Pit Bulls Deserve to Shine“. In November of 2016, they received one of the most beautiful and moving emails they have ever received. One of their followers expressed to them that from following their Instagram page and being a member of the BARX + BLOOMS community, she was inspired to adopt a Pit Bull and that she had adopted her first pittie, Paladyn! This was a BIG moment for business partners Allyx and Alysia. It was the first of many Pit Bulls who had been brought into a loving home and given a chance to not only shine, but thrive because of the BARX + BLOOMS community. This is why Allyx and Alysia started BARX + BLOOMS and what makes all of the hard work of owning a business worth it. They are thankful for the positive reception they have received since they opened about a year ago. Not many companies have zeroed in on a Pit Bull mom’s unique needs and they are happy to be one of the first pioneers in the market. 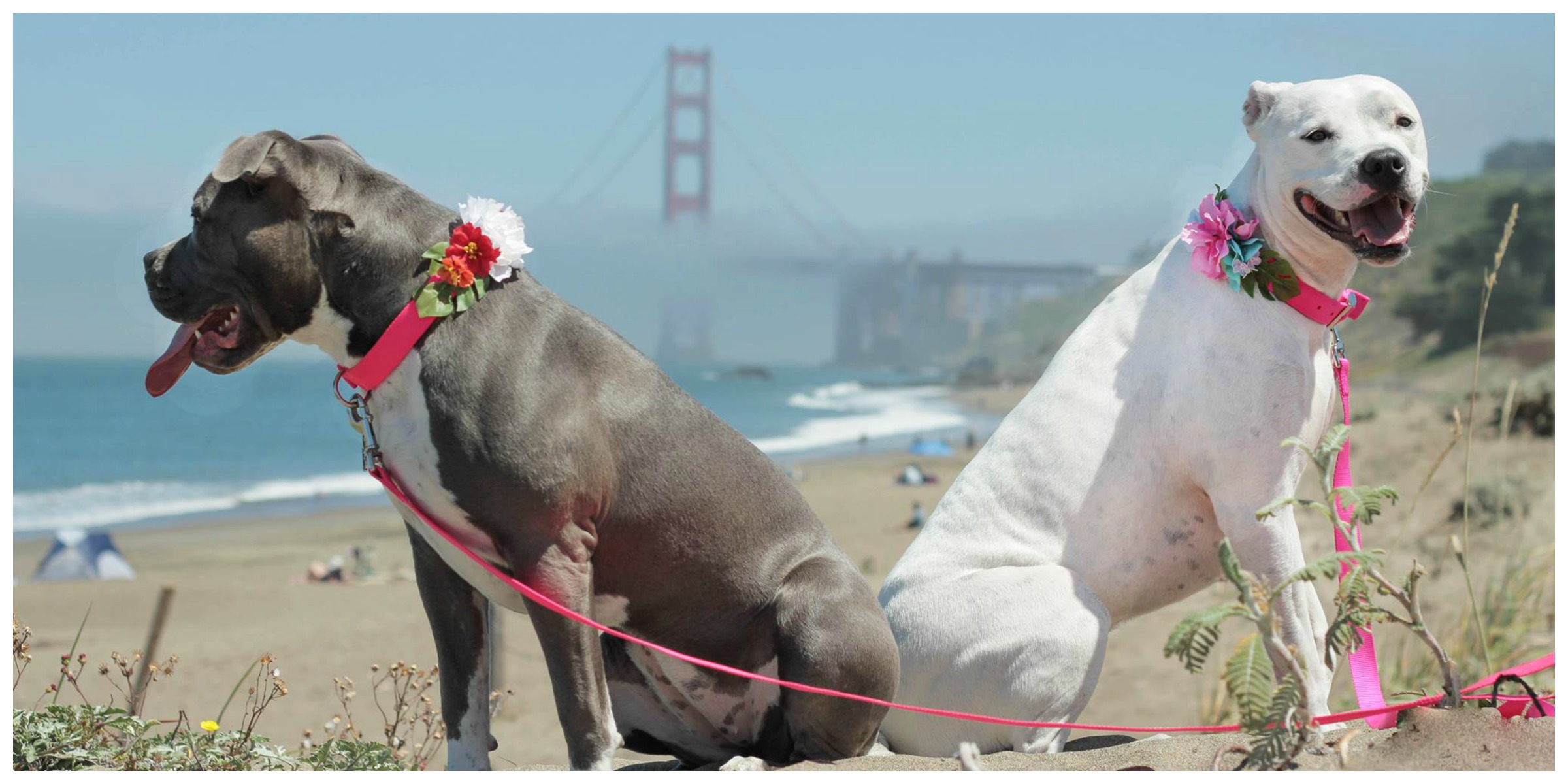 THE INSPIRATION BEHIND BARX + BLOOMS

Allyx noticed when she would walk her loving Pit Bull, Cleo, that passers by and strangers would shy away from them and assume she was a dangerous dog. Allyx hated the feeling of being judged and was determined to change people’s perceptions of sweet Cleo. Such was the inspiration to design BARX + BLOOMS‘ first flower collar. The next time Cleo and Allyx went out in public for a walk with her new flower collar, strangers suddenly would approach them kindly and inquire about the collar and Cleo. This had never happened before! The flower collar immediately changed how people saw Cleo. 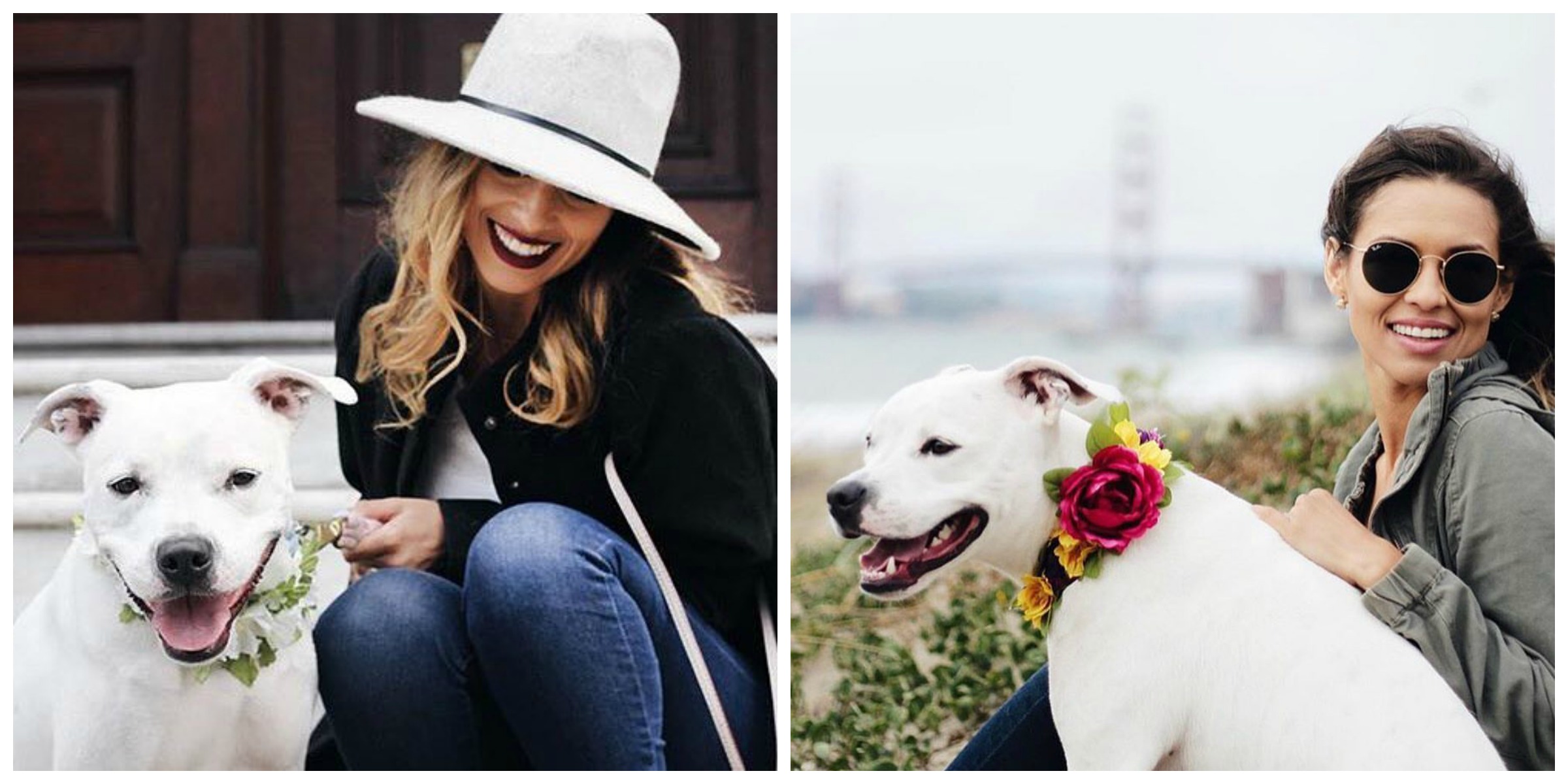 This stirred a desire in Allyx for other Pit Bulls and Pit Bull owners to experience the same positive interactions in public as she did. Shortly after, she and Alysia created BARX + BLOOMS, a dog accessories company that designs unique and high quality flower collars. Allyx has a background in design and Alysia has a background in fashion. Together, they are the Lead Designers of their collars. All collars are Limited Edition and Limited Quantity, and dogs of all breeds and sizes purchase and wear them. 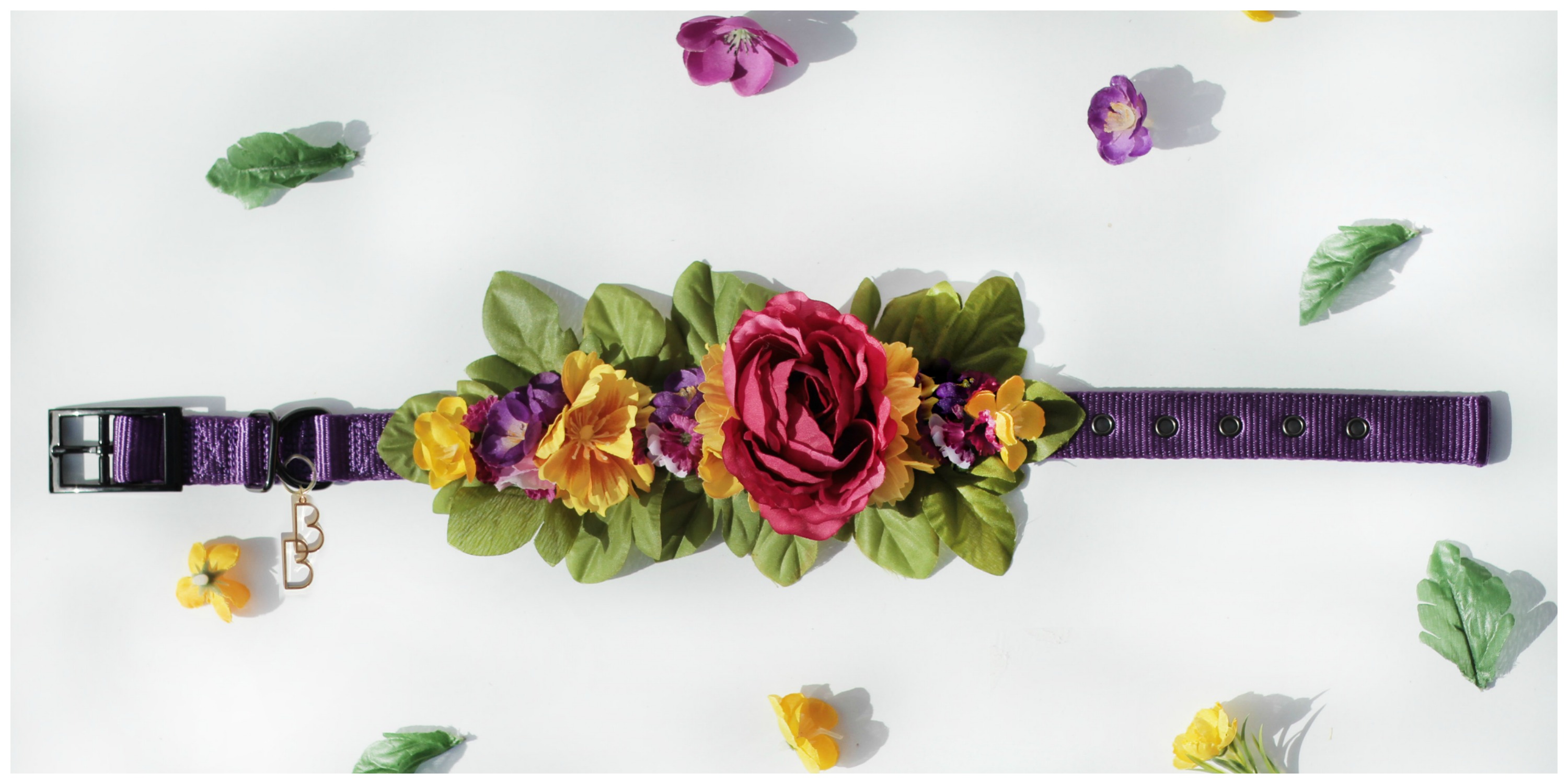 BARX + BLOOMS is dedicated to advocating on behalf of Pit Bull type dogs as well as supporting dog rescues. They donate 10% of profits from each purchase to a different Bully Breed Rescue each month. Pit Bull Advocacy is important because there are thousands of Pit Bull type dogs like Cleo who are misunderstood and face a high probability of death or mistreatment because of the way that they look. BARX + BLOOMS is dedicated to securing equal treatment and opportunity for “Pit Bull” type dogs. They believe that all dogs are individuals and every dog deserves a chance to shine. 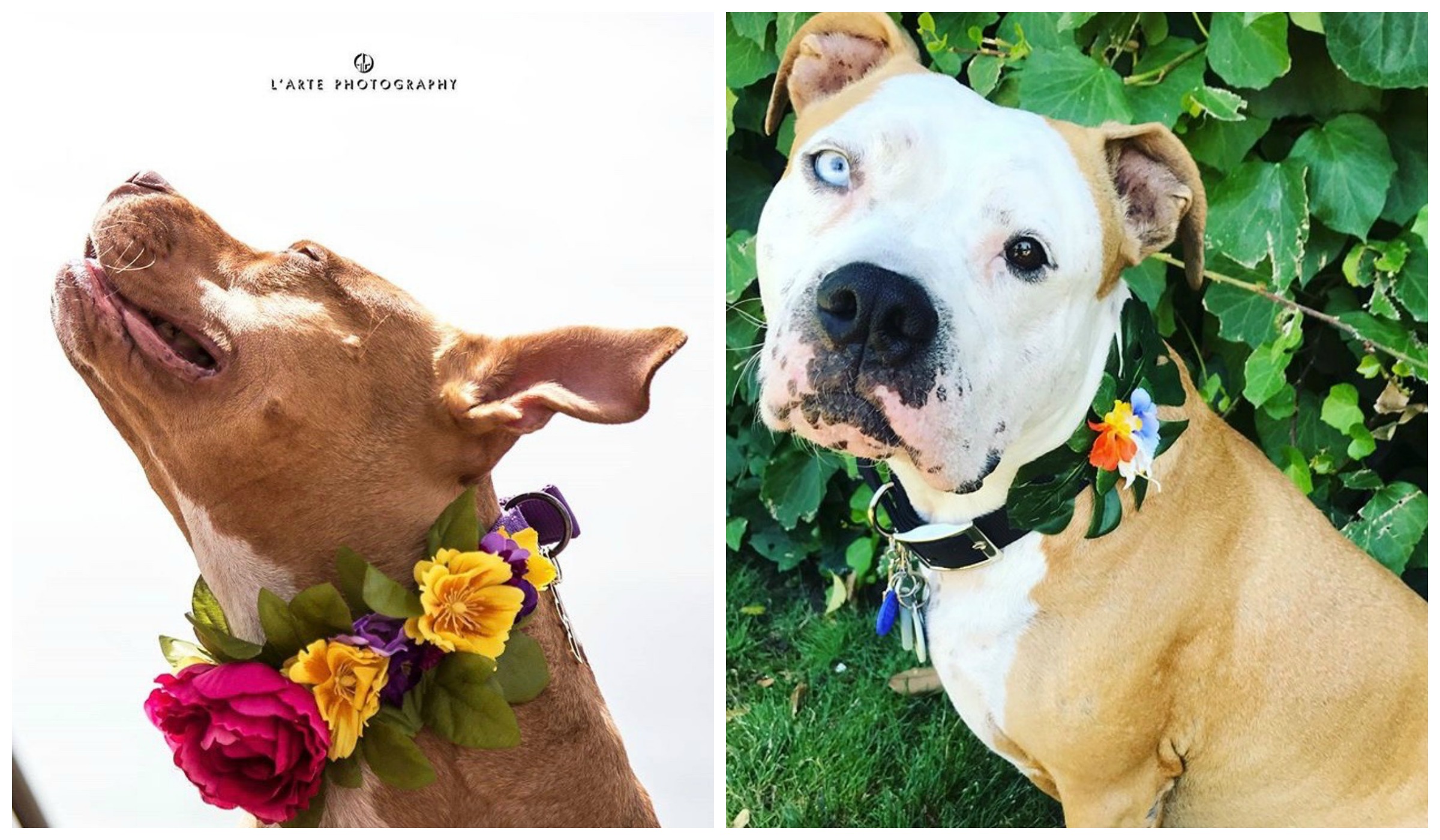 Pit Bull prejudice is what almost separated Allyx from one of the greatest gifts of her life. Her sweet pup, Cleo, was subject to Allyx’s PREJUDICE against all “Pit Bull” type dogs and her prejudice against her did not subside after Cleo found her forever home. Allyx believed the misconceptions portrayed in the media about Pit Bulls and never wanted to own one. Fortunately, her husband would not relinquish his intention to adopt a Pit Bull and he convinced Allyx to rescue eight month old Cleo. The apartment that they were living in did not allow dogs that barked and Cleo was the only quiet dog in the shelter. Adopting her was a very impulsive decision. After they brought Cleo home, Allyx wasn’t sure what to believe. Despite Cleo’s cuteness, she was still afraid and skeptical of her. It was so bad that when she was alone with Cleo in the apartment, she would watch her to see if she would turn on her.

During the first week of adopting Cleo, there were a series of events that almost led Allyx to making one of the worst decisions of her life. She called her parents to tell them about the new addition to their family and they said “Oh wow. Good luck. Just know we are never coming over to your house with that dog around.” (Their hearts towards Pits have drastically changed since.) Then, when Allyx and her husband contacted their apartment complex to let them know that they had adopted a dog and wanted to file the paperwork, they said that Pit Bull Type dogs were forbidden. That same day, Allyx took Cleo out for a walk and a lady started screaming upon the sight of her saying, “OH my goodness, OH MY GOSH, your dog! I’m sorry, but I am so scared of your dog!” while running in the opposite direction. Allyx thought to herself, “Is this going to be my life? Is this what it’s going to be like when we are in public or when people want to come over to our house or when we are trying to find a place to rent?” 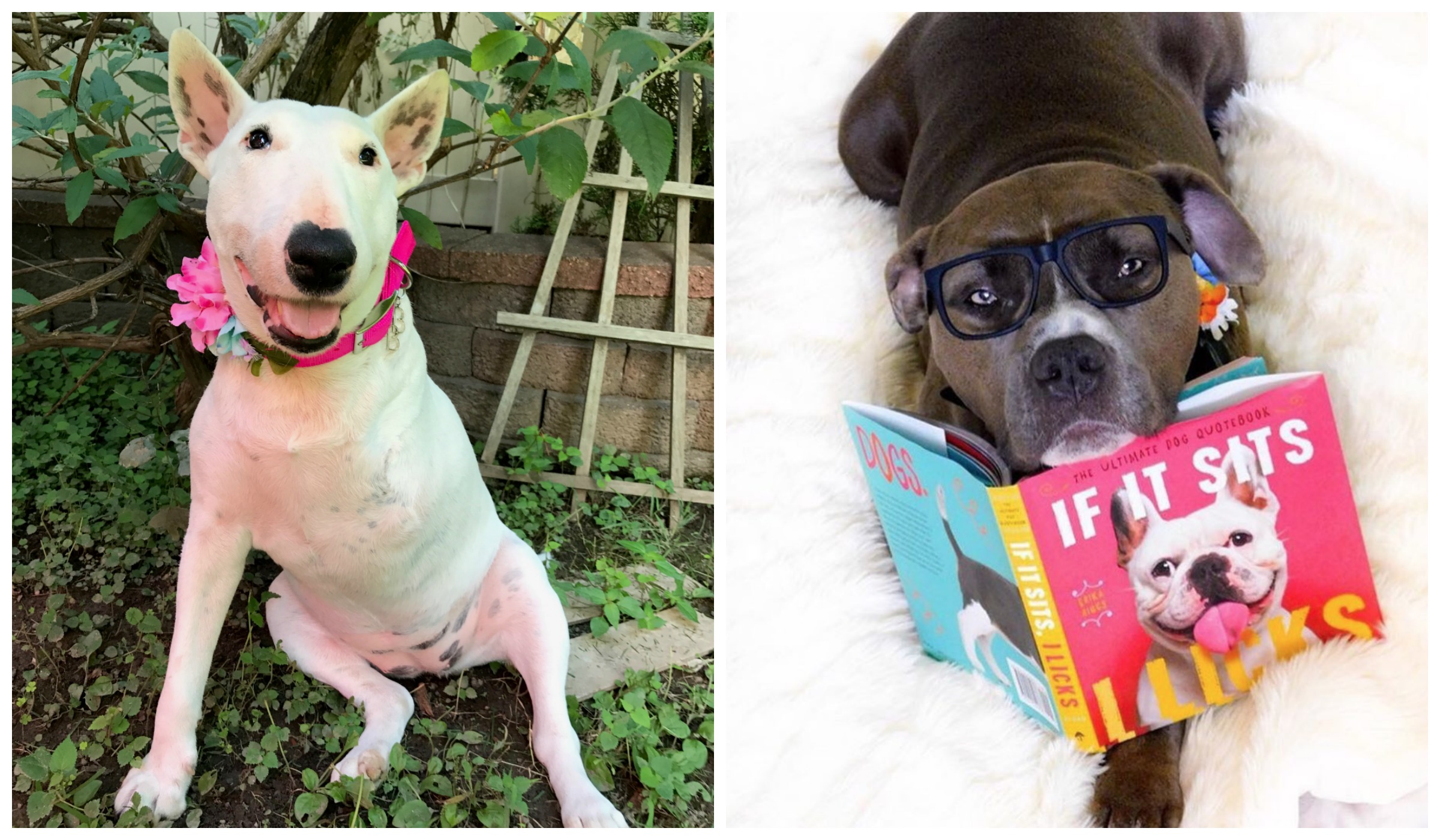 With that,  Allyx decided owning Cleo was too difficult and too much of a burden. She then called her husband and told him that they would have to find her a new home. He was devastated. Moments later, Allyx drove to another county shelter, looking for a new, “more acceptable” dog to adopt. Luckily, she didn’t find one and ended up driving back. 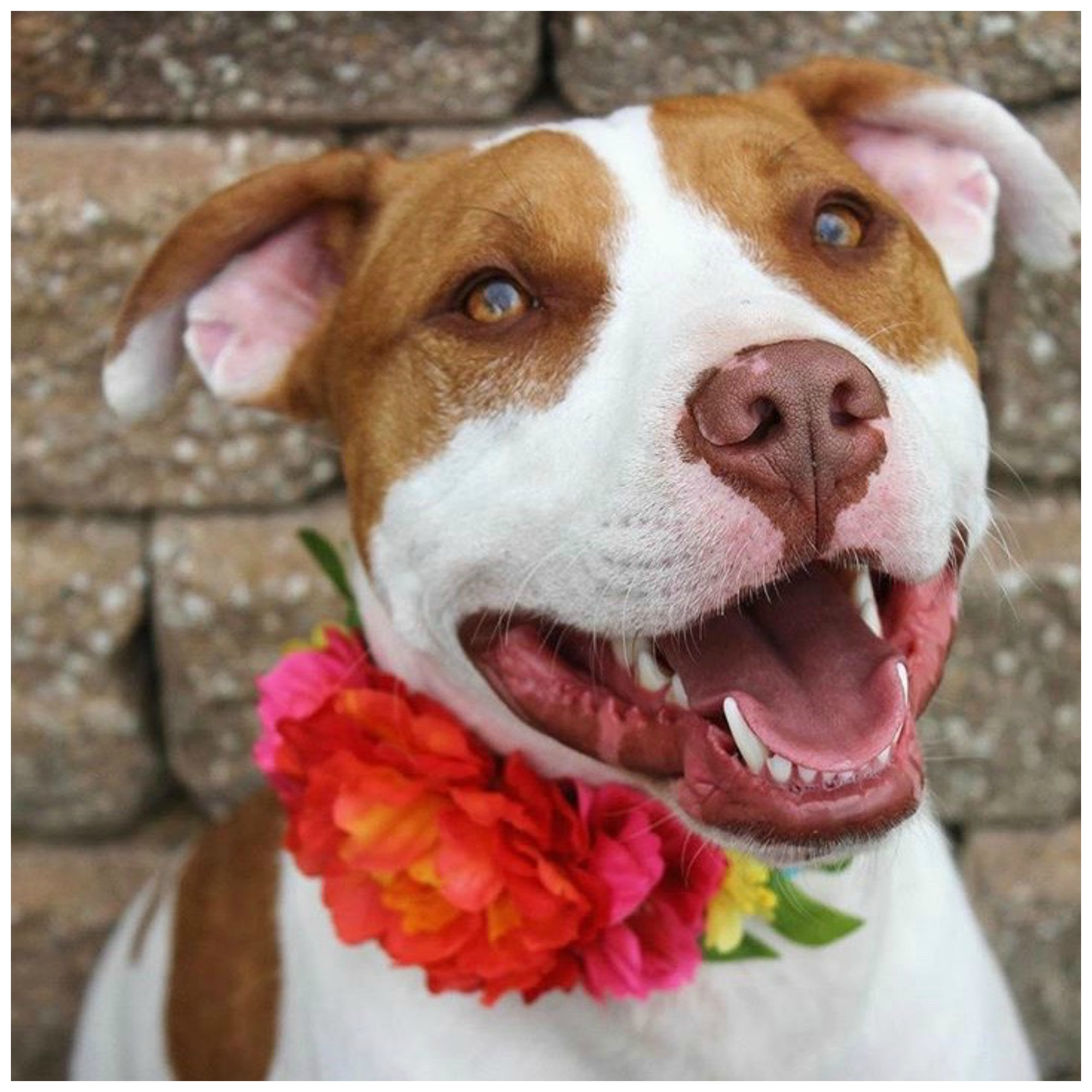 When Allyx got home, there was Cleo. Tail wagging, waiting patiently to love her new owner. Allyx walked into her bedroom– Cleo followed. She walked into the bathroom– Cleo followed. She walked to the kitchen– Cleo followed. As she was doing the dishes, there Cleo was, sitting at her forever mom’s feet, looking up at her with her sweet eyes, waiting to give some love. It was in that moment that it clicked. All this dog wants to do is love. She has no idea that people are scared of her and view her as a monster. In an instant, Cleo was Allyx’s, and no external opinions about Pit Bulls could change her heart. She finally understood that Cleo was just a dog like any other dog. Instead of letting others and the media tell her who Cleo was, Allyx was going to let Cleo show her herself. 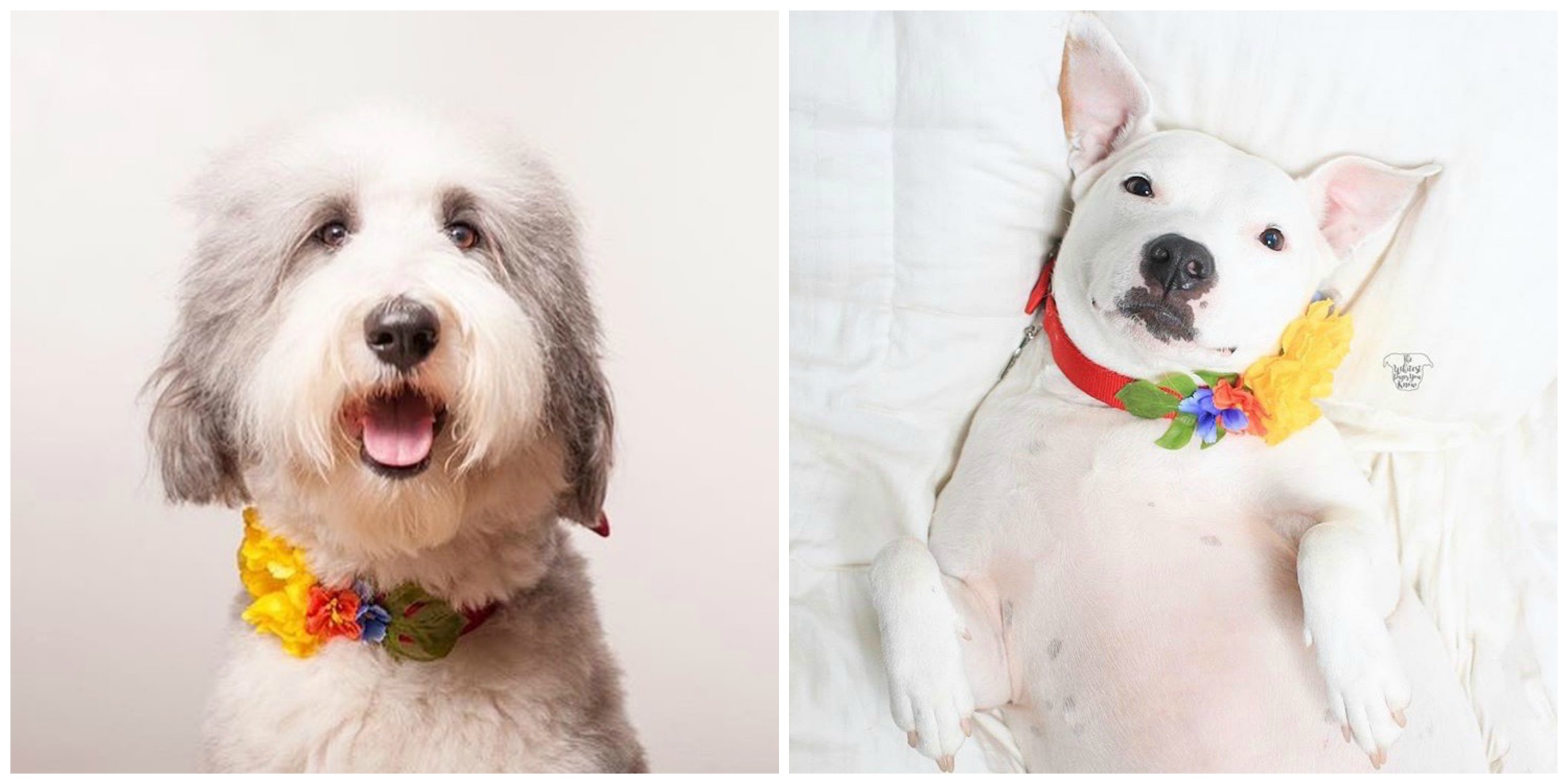 Allyx knows that Pit Bull Advocacy is important because there are many people who believe the same myths that she did about Pit Bulls. BARX + BLOOMS is dedicated to shining a positive light and telling the true story about these incredible dogs.

Cleo was found on the side of the road in Wilmington, NC, where Allyx and her husband were living at the time. They have since moved to San Francisco, where they adopted their second pit bull, Zara. Cleo’s nickname is sweetness because she truly is THE SWEETEST THING. She loves people and dogs and doesn’t know a stranger. She is very athletic and has a lot of energy. She is smart and has a high desire to please. She cuddles like a human and rests her head on her mom’s shoulder while she’s driving. Cleo is the dog who has forever changed Allyx’s life and opened her heart to Pit Bull type dogs. 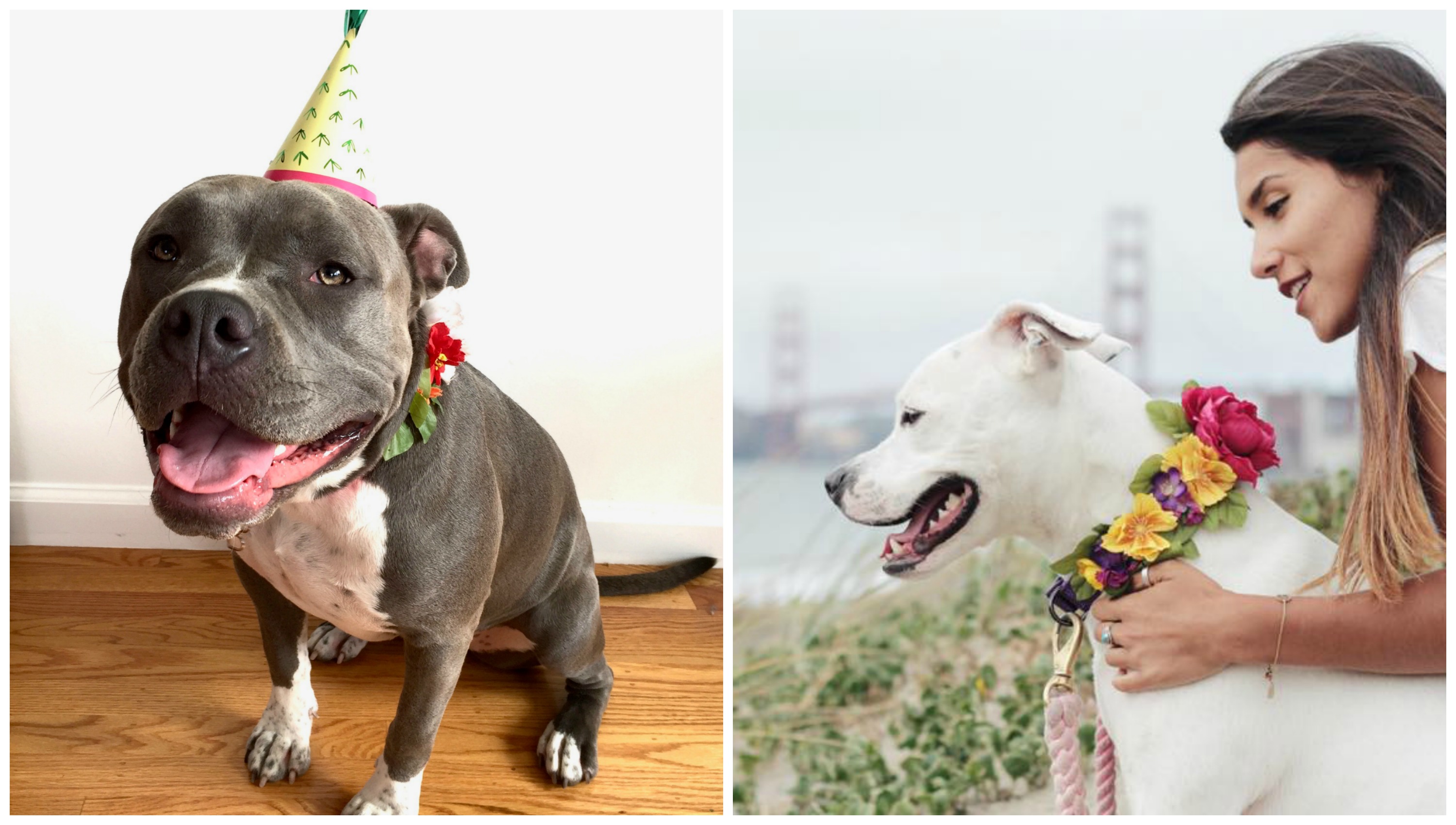 Their second dog, Zara, is a stunner. She’s shaped like a burrito and built like a tank…she’s also a huge HAM!  When they first adopted her, she was four months old. Allyx’s husband randomly decided to stop at the animal shelter and he texted her a picture of a perfect, blue nose, blocky headed, velvety, stout pibble. Zara had also been left on the side of the road but – true to form – proved to be full of love and personality.  Always making her parents laugh, she snorts and snores and is floppy, uncoordinated, hilariously un-athletic, LOVES food, loves to dance, loves to listen to hip hop and loves kids. If it wasn’t for Cleo, Allyx would have never adopted her sister, Zara. Zara has transformed from an insecure, scared, quiet pup, into a confident, fun-loving hippo. 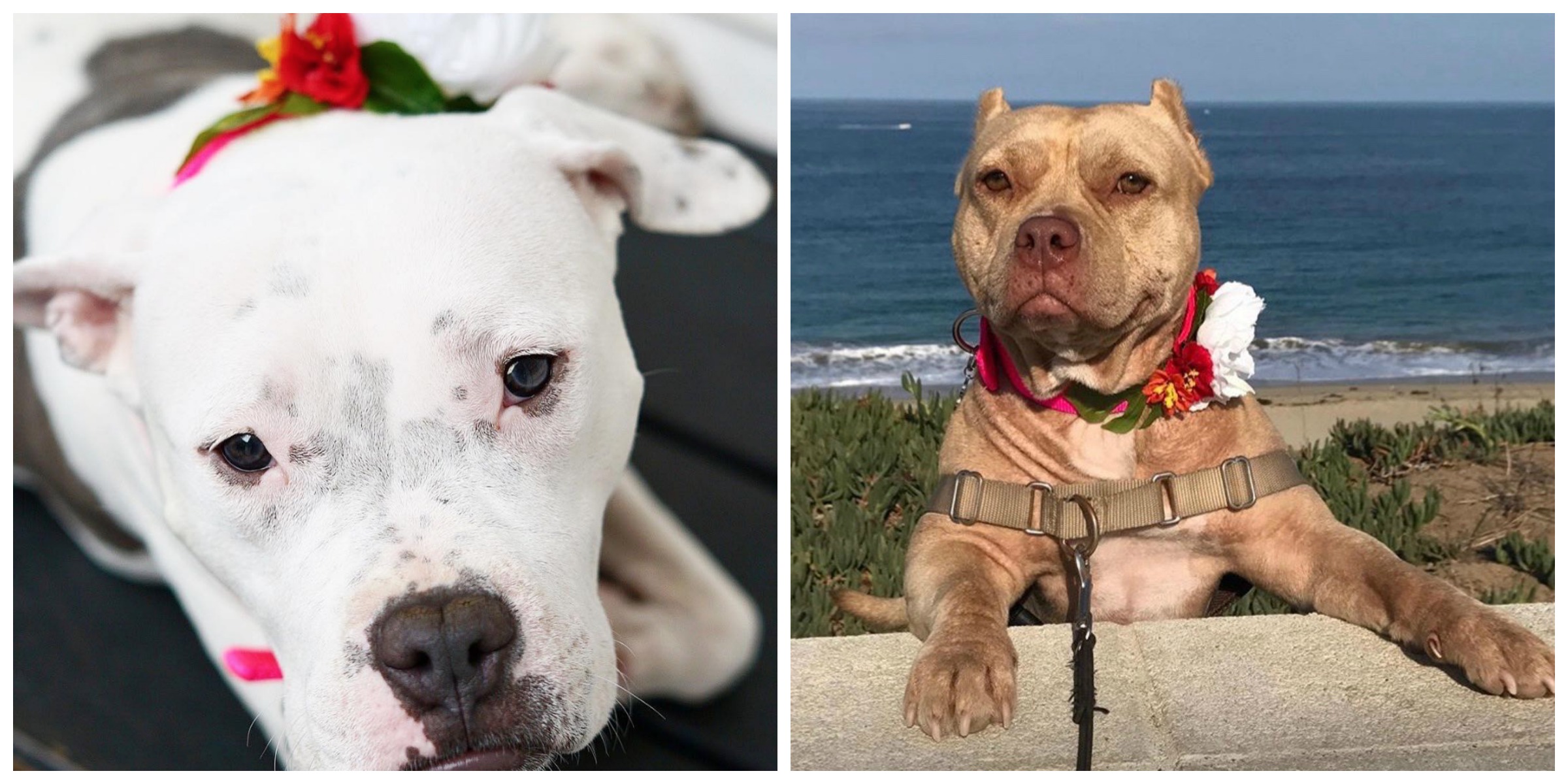 We should probably cuddle now #sundayvibes 😴 || Adora-bull Miss Marla @marlamcp in her BARX + BLOOMS “Deep Blue Sea” Collar || Every Purchase Helps Save the Life of a Dog in Need at @fresnobullyrescue for the month of August! || Available only at www.barxandblooms.com (link in bio) #BARXANDBLOOMS #fresnobullyrescue #fresnobullyrescuefoster

A D V E N T U R E A W A I T S ⛰✨|| Sweet Rue, in her sold out BARX + BLOOMS, “Caribbean Breeze ” collar || Every Purchase Helps Save the Life of a Dog in Need at @fresnobullyrescue for the month of August! 🐾 || Collars + Leads Available Only at www.barxandblooms.com (link in bio) #BARXANDBLOOMS

Lovebug Laurel from @fresnobullyrescue in her BARX + BLOOMS “Tropicana Rica” Collar 💜🌺 This precious girl is available for adoption through our August Rescue Partner, Fresno Bully Rescue! || Collars + Leads Available Only at www.barxandblooms.com (link in bio) #BARXANDBLOOMS

Cleo and us at BARX + BLOOMS wish you a Happy Memorial Day! We are thankful for those who have sacrificed so much for our freedom ❤️🇺🇸

When you realize it’s only Tuesday 😧 but you’re alright because you see pictures of cute pups like @aryathepitbull that make today that much better 🐶✨ #dogmagic #literallythatsyou || SHOP CLOSED: We are currently dreaming up some amazing pieces for your pups. Online shop will reopen JUNE 3RD! 🎉 Sign up to be a BARX + BLOOMS VIP to get first dibs at www.barxandblooms.com. (link in bio) #BARXANDBLOOMS