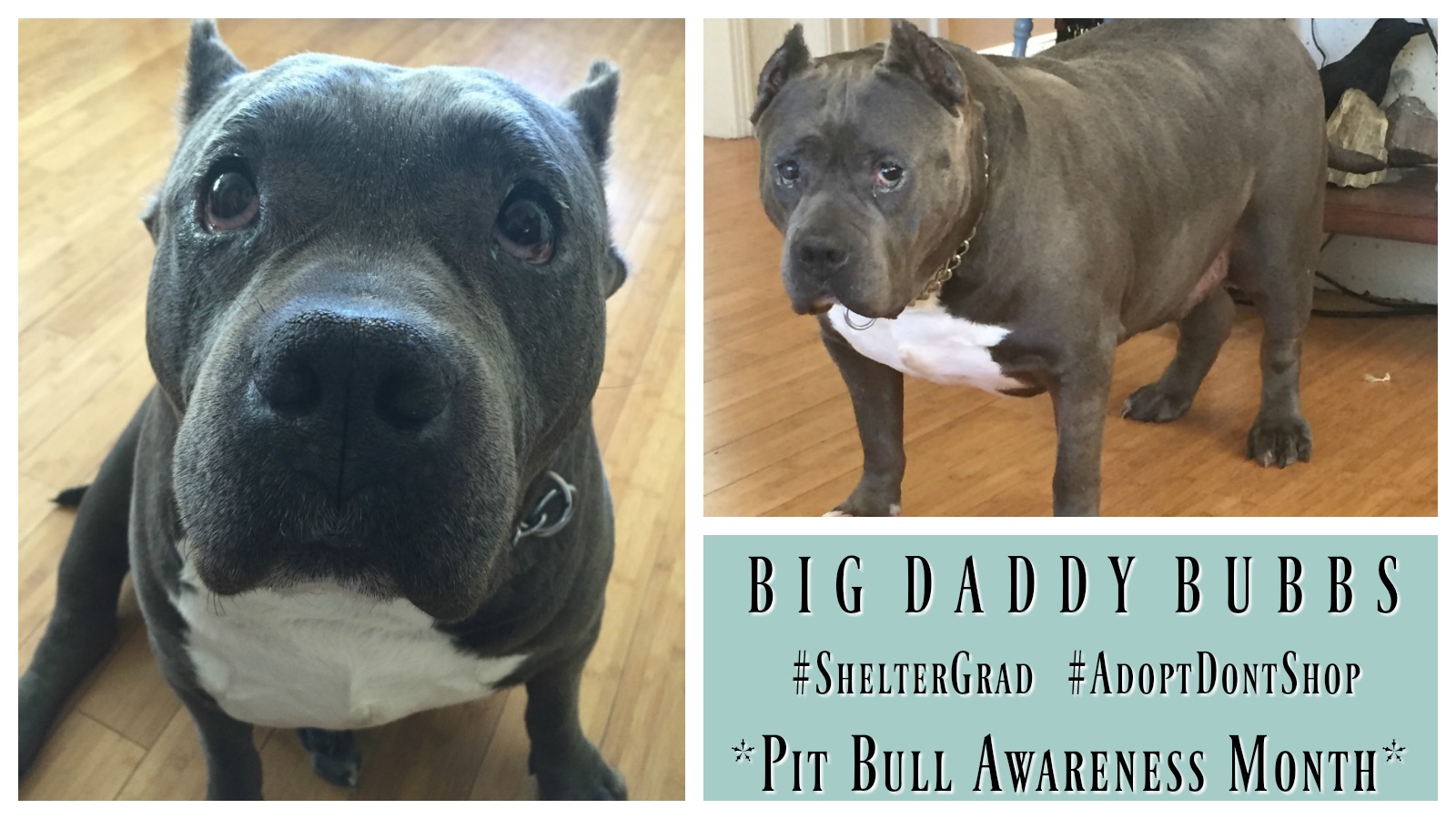 Kristen considers herself the luckiest woman on Earth, because she is Big Daddy’s furever mom! Kristen follows a rescue / non-profit called Stand Up for Pits (that we recently featured, click HERE) on Facebook, and back in August of 2015, Stand Up for Pits reposted a video of a pit bull that was in a South LA shelter. Kristen usually never looks at the videos or reads the captions, because emotionally, it’s too hard to handle. She did this time and she saw a handsome, big pit bull named Big Daddy running around with his jowls flapping in the air! He seemed so happy and unaware of his possible fate. After Kristen saw the video for the first time, she watched it several more times and for 2 days, could not stop thinking about what possibly lay ahead for Big Daddy if he stayed in the shelter.

Kristen had worked as a vet tech, and spent a lot of time in different shelters (in Los Angeles, Baldwin Park, Bakersfield) performing spay and neuters.  While working at one of the shelters, she saw a staff member walking dogs, with their tails wagging, one right after the other, into a room.  She stopped the staff member to ask where each dog was going, and he replied “End of the road.”  The man, though not very warm, was just doing his job, and possibly, after years of doing this, he became hardened.  The thought of each dog happily and unknowingly take their last walk destroyed Kristen, and she had to quit her line of work.

Kristen knew that she could NOT let this happen to Big Daddy.  She posted on his Facebook thread, writing that she would adopt him (he was red listed at this time), but she wasn’t off for three more days and worked the same hours as the shelter. Soon after, a kind woman named Rachel offered to get Big Daddy and bring him to Kristen’s work.  Kristen was SO thankful and relieved, but also very worried, as she had other dogs at home and she knew nothing about Big Daddy. When Big Daddy arrived at Kristen’s workplace, a receptionist  found her, and said “There is a REALLY big Pit Bull here for you…I mean REALLY BIG!”  Kristen and Big Daddy finally met, and it was love at first sight!!

Big Daddy has integrated into his new family well!  He gets along with his new canine AND feline siblings, and is the most loving dog Kristen has known.  He’s quite the character, and only has one facial expression, as you can see in his Instagram photos. He’s currently 124lbs, which is a conversation starter when he meets new people.  He accompanies his mom whenever she’s out an about in Los Angeles, and they get stopped everywhere they go.  One minute, people are telling Kristen that they are afraid of pit bulls, and they next, they are rolling around on the ground with Big Daddy!   After they say goodbye, Kristen always tells Big Daddy, “One person at a time.  We will change things.”

If you ever see Kristen and Big Daddy in the LA area, don’t hesitate to say hello.  They always make time to let people know that pit bulls are as loving as any other type of dog!

Ya I know they’re honey sticks!! I also believe they are on my diet!!! They are also like 1/4 inch.. so hand one over!!! Geezus !!! #pitbullsofinstagram #pitbull #pitbulls #fatdogproblems #adoptthecropped #adoptdontshop #fuckbsl

Monday… Ugh hot as balls … Not my balls cause my family is responsible … But someone’s balls!! #pitbullsofinstagram #pitbull #adoptthecropped #fatdogproblems

What part of don’t sit down wind of me doesn’t he get?? ????????#pitbullsofinstagram #pitbull #adoptdontshop #adoptthecropped

My aunt Deanna giving me a strawberry!!! I had a weigh in today and I only lost 1 lb!!! Moms head almost exploded!! I’ve been hardcore dieting for 2 months ..???? I had s thyroid test today lol!! #pitbullsofinstagram #adoptdontshop #pitbull

Hanging w mom on errands!! I love her sigh of defeat when the blanket shifts and my pucker hole is on the seat!!! ????????????#pitbullsofinstagram #pitbulls #adoptdontshop

Chillin w my bro McCartney…. (We are listening to the GooGoo Dolls while mom cleans…) He walks backwards a lot and gets stuck in places … But he’s super nice to me… Mom says he’s special…#adoptdontshop #pitbullsofinstagram #spayandneuter

Happy Holidays whatever you celebrate!!! Mom said getting this pic was 20 minutes she’ll never get back ! Hee hee #pitbullsofinstagram #pitbulls #adoptdontshop