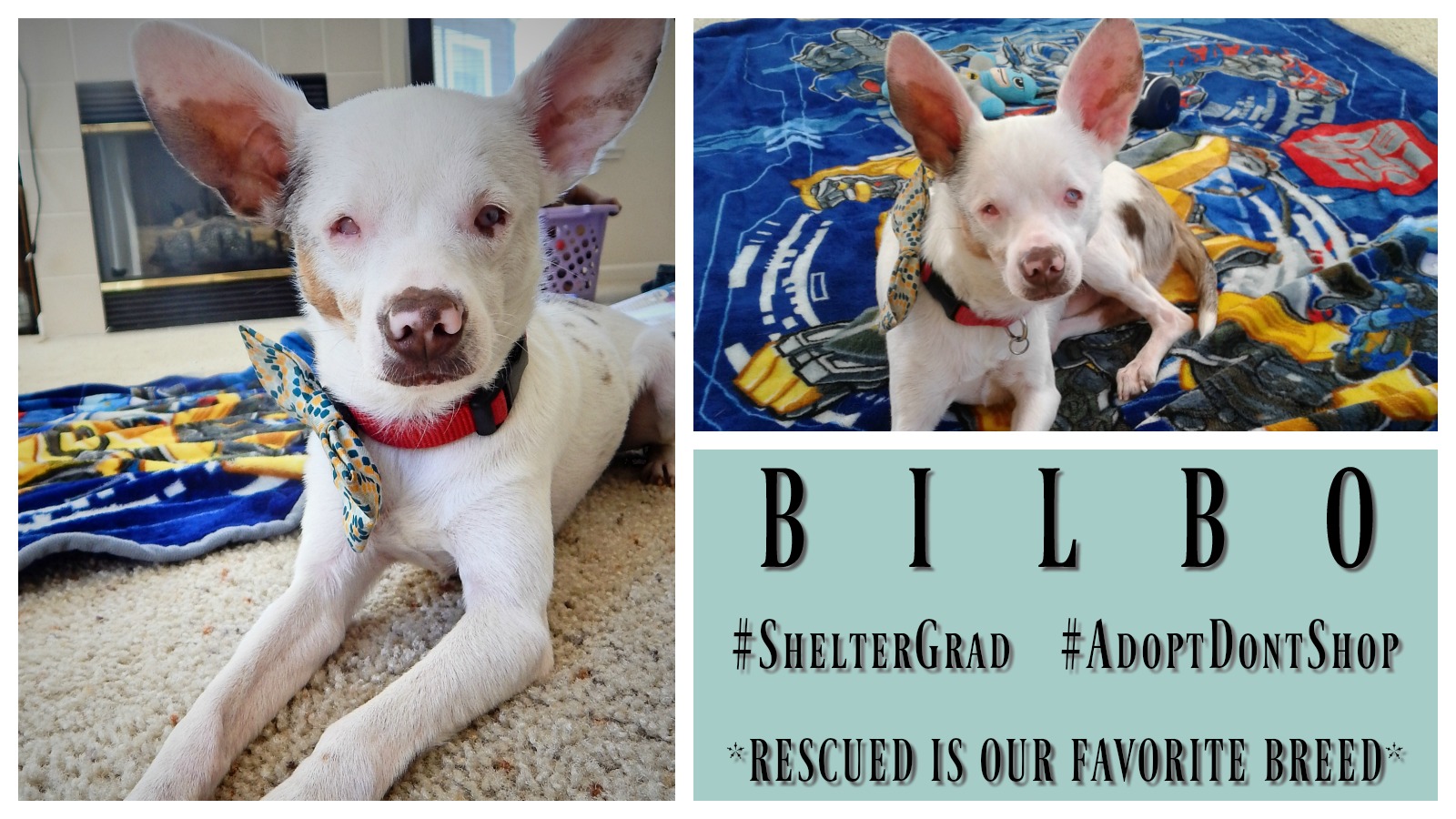 Bilbo is a mix of “who-knows” mutt. What his forever family does know is that Bilbo has some enormous ears and cute-as-a-button blue eyes. Like may rescued animals, there wasn’t much information about him to pass along, but the vet thinks that Bilbo’s about three years young. You’ll often catch him wearing a cool tee shirt and a top-notch bowtie collar. Occasionally, you’ll spot Bilbo in his superhero cape. His family should have changed his name to Captain Courage. 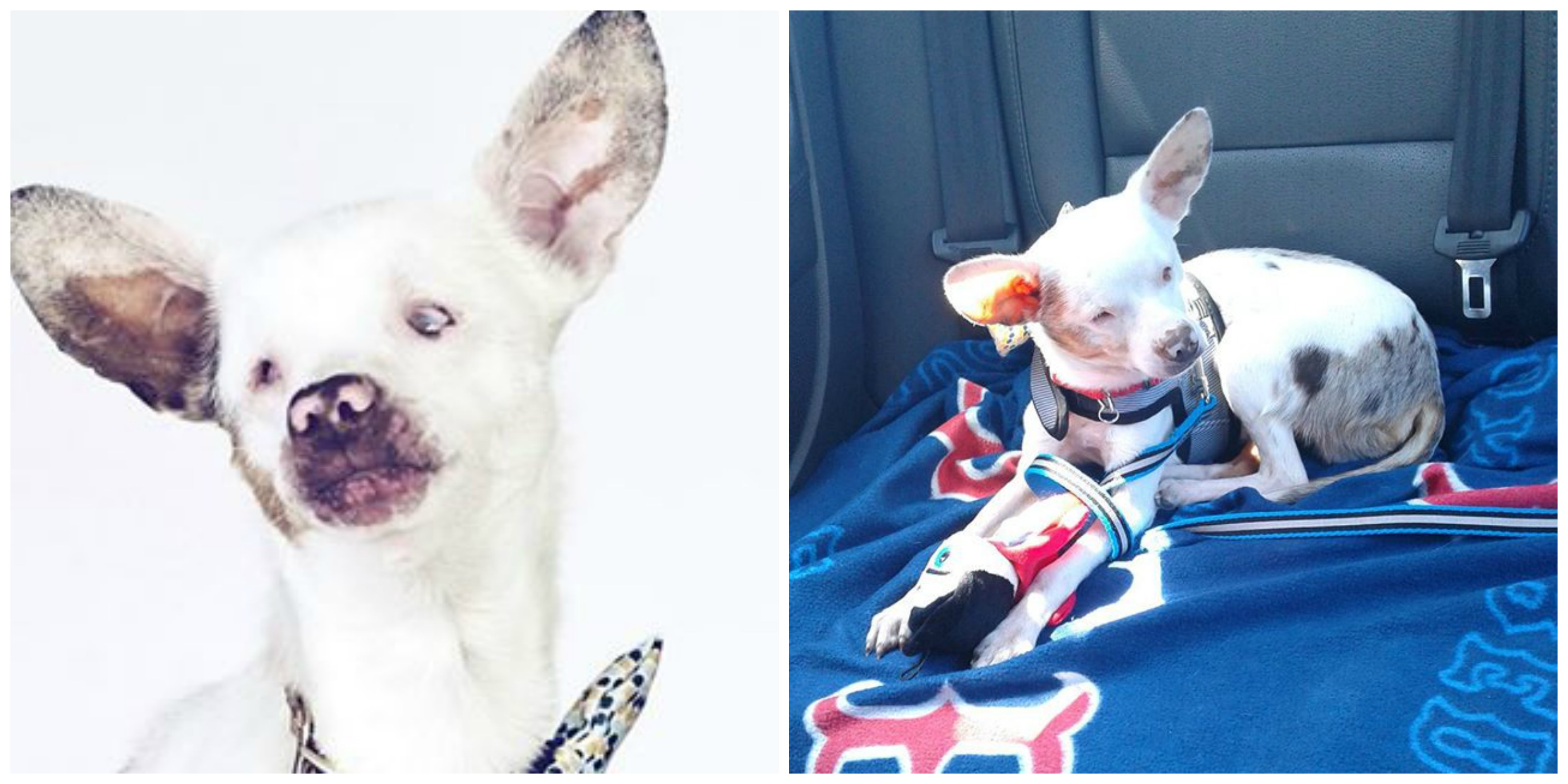 What kept Bilbo alive was a volunteer’s ability to see his personality, rather than his disability. Bilbo’s family first saw him on the Bradshaw Animal Shelter of Sacramento’s website. He was about a quarter of the way down the list of adoptable dogs. They were immediately drawn to his uniqueness that gleamed from his photo, so they clicked on the link to see the video and they knew right away; he was going to be part of their family.

They inquired about Bilbo, filled out an application, and then proceeded to go to the foster home to pay Bilbo a visit. Bilbo dashed out of his cage like Flash to greet his new family. Included in his meet and greet was the most hilarious “happy dance,” where he tucks his tail and prances all over with joyful gratitude, like a jack rabbit. 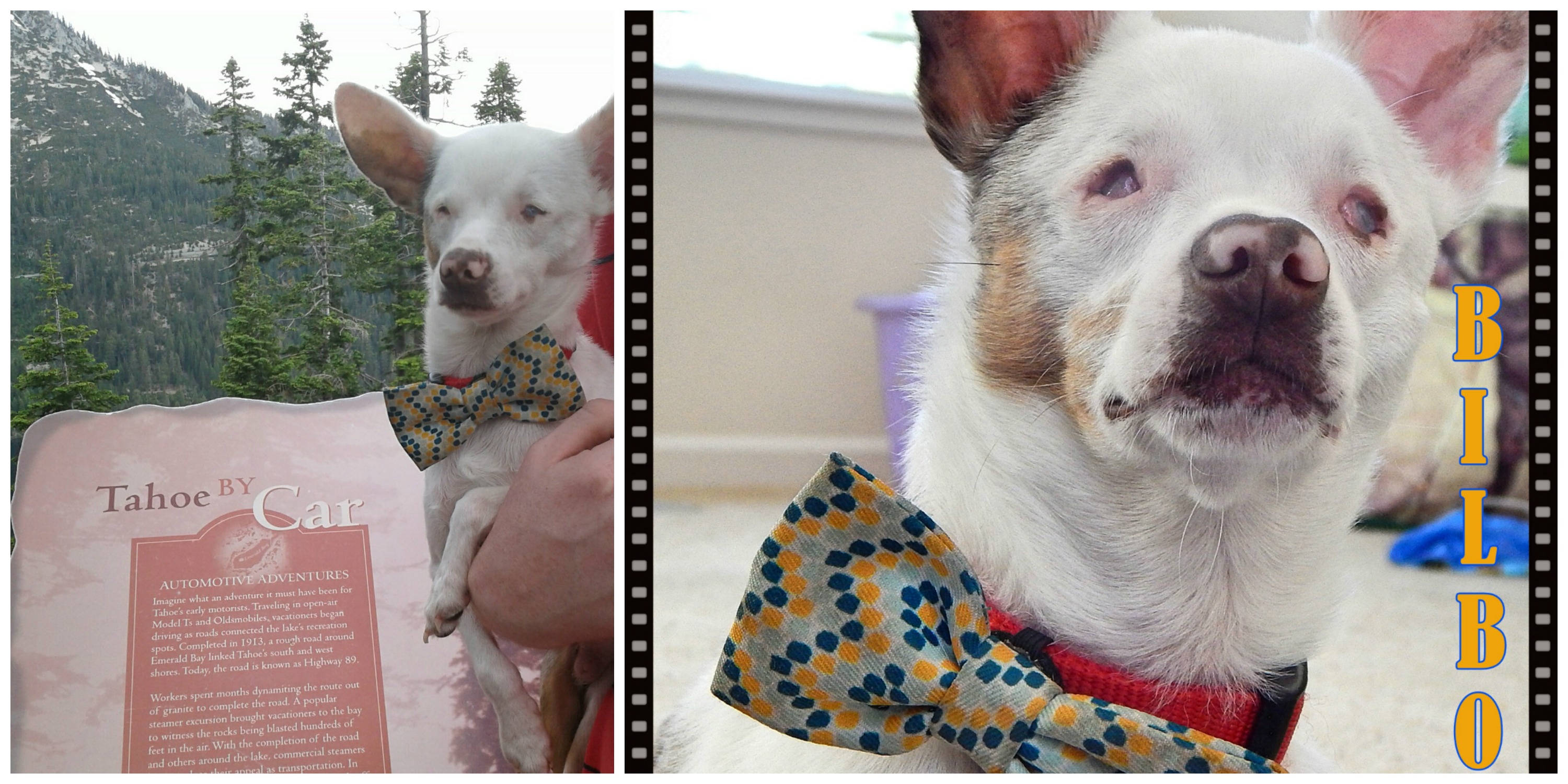 Coco Bean, another rescued Yorkie/Chihuahua mix, is Bilbo’s Super Woman and partner in crime. He often uses her as his extra pair of eyes when roaming outside the house. Coco Bean also protects him from the Cat Woman of their home aka Bella, the rescued Ragdoll. Unfortunately, Bella doesn’t always feel comfortable when Bilbo bumps into her, especially when she’s eating, so Coco Bean keeps him safe. Coco Bean, when fearing he’s in danger of a swift swat, will pump up her chest and stand firm in front of the Bella, letting the her know to back off until he passes by. It’s the most noble of acts. 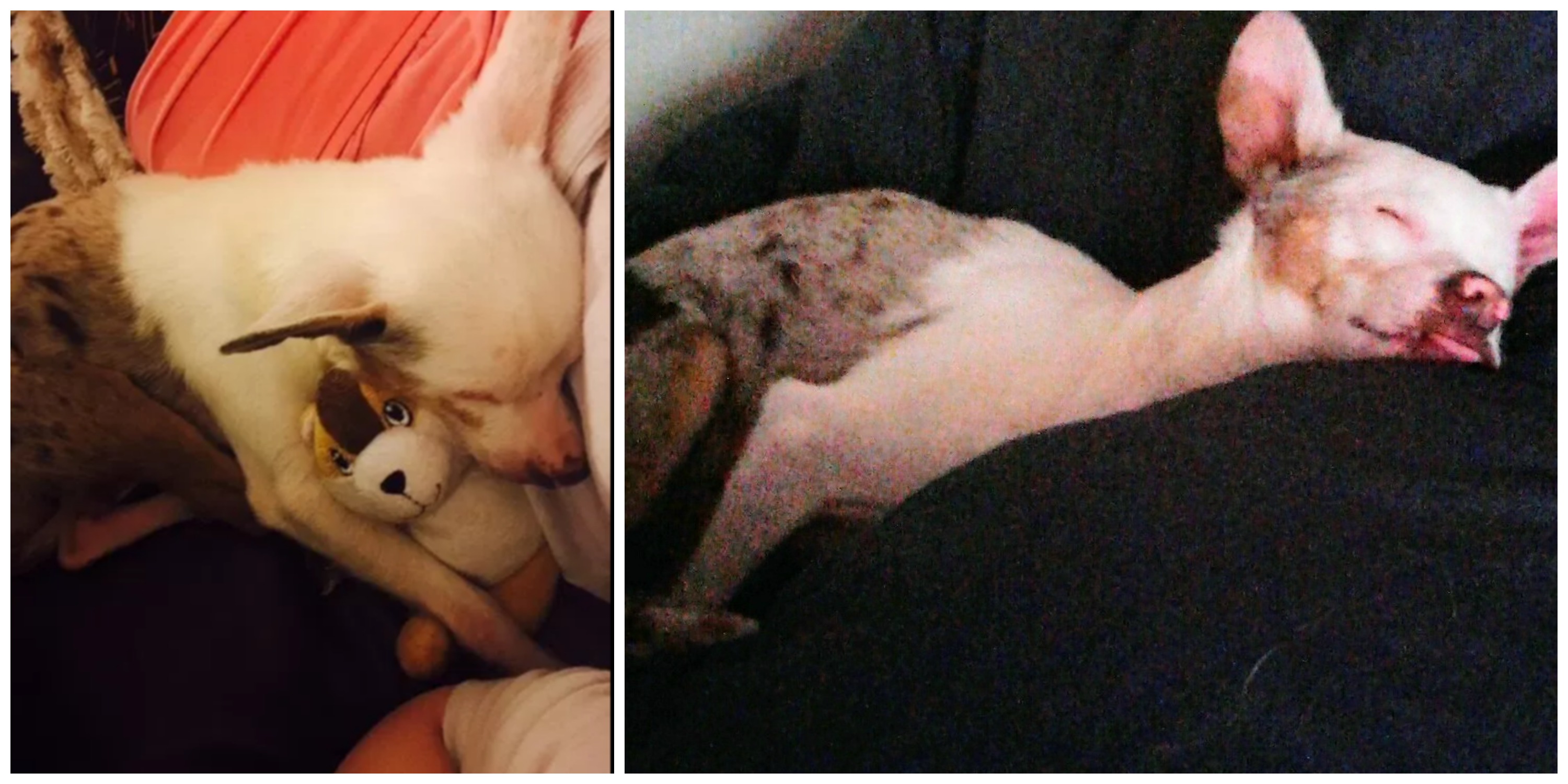 Like Bilbo’s forever family, people can learn a lot from him about strength, courage, acceptance, and love. Bilbo is believed to have been born blind and as he does not know anything else, he accepts people and his circumstances as they come, without limits. It’s a strength that everyone should admire. Bilbo is brave when faced with new situations and will leap into them without hesitation. He lives in the spirit of love and gratitude. He is purely grateful to get out of the cage and onto beds or on the couch. He is grateful to sunbathe in front of the patio doors, eat freely outside of a cage, snuggle close to people, and run freely and safely at a local dog park, which has a special needs area for dogs just like Bilbo. Johnson Springview Park in Rocklin, California should be an example for other dog parks in other areas that may have dogs with special needs in their communities. The dog’s safety depends on dog parks like Johnson Springview RRuff Dog Park. Without these special needs safety nets, many dogs with special needs would not be able to safety explore new surroundings for proper stimulation and exercise needed for their health.

Bilbo’s personality is that of a superhero. Smelling is one of his superpowers, which makes him a real foodie! With his heightened sense of smell, he can sense food from a mile away. He can’t get enough of the stuff. Food is a major motivator for him. Bilbo is the ultimate destroyer when it comes to the kibble. Although he doesn’t have the enhanced sight and hearing of Superman, Bilbo has the courageous superpowers of Daredevil. You’ll often catch his doing an American Ninja Warrior leap off the couch or beds of his home, although he has no idea what he’ll land on. Bilbo has no night vision so for his safety, he sleeps snuggly in his bedded cage next to his humans. Otherwise, he just might get into some playful mischief. 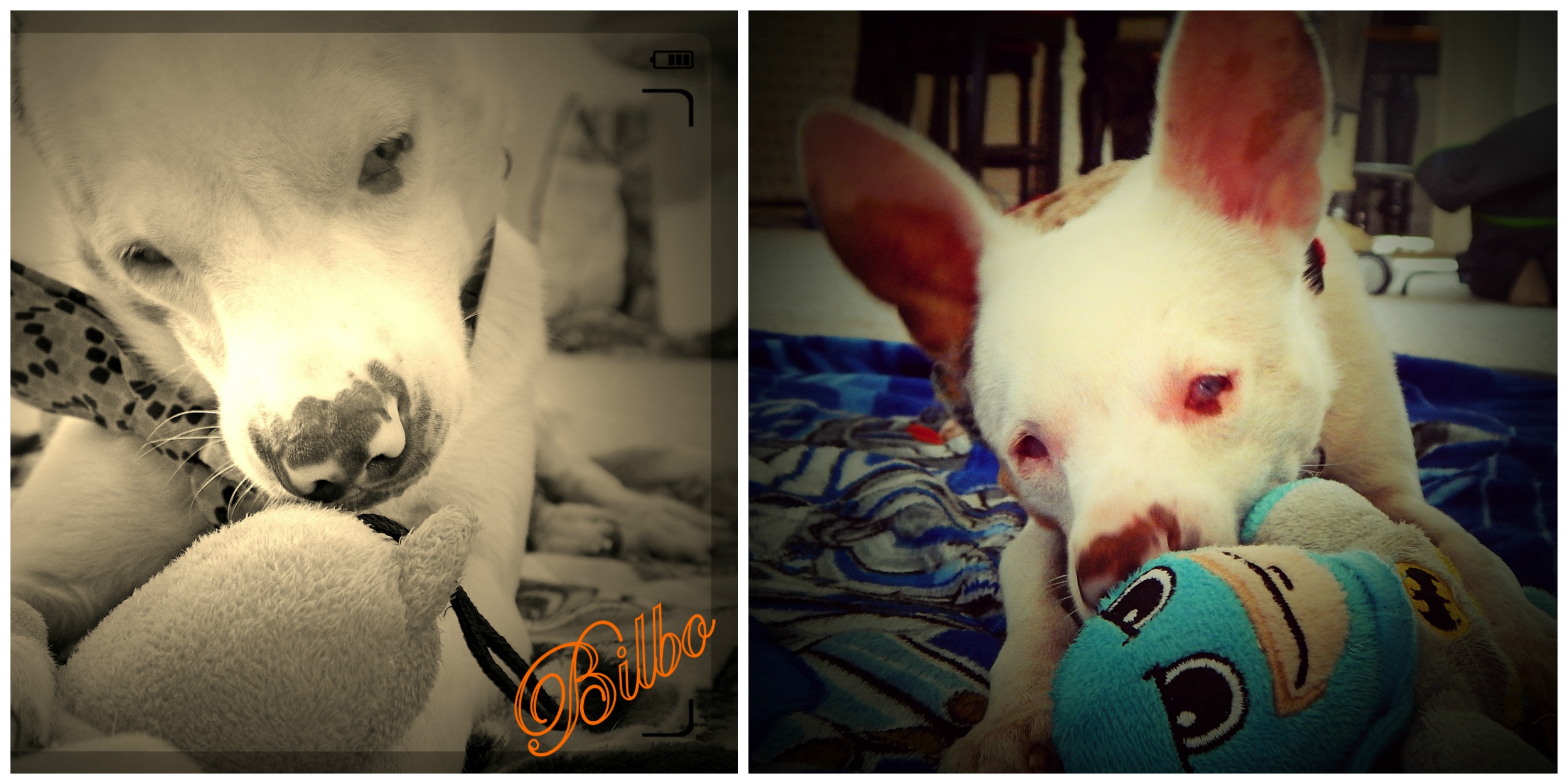 Bilbos superpower bonus is his licker. He loves giving kisses and he loves to receive them (from any human or animal). Bilbo is the cupid of dog breeds. Aquaman is Bilbo’s least favorite of the superheroes, as he is not fond of water. Bath time is his least favorite activity. 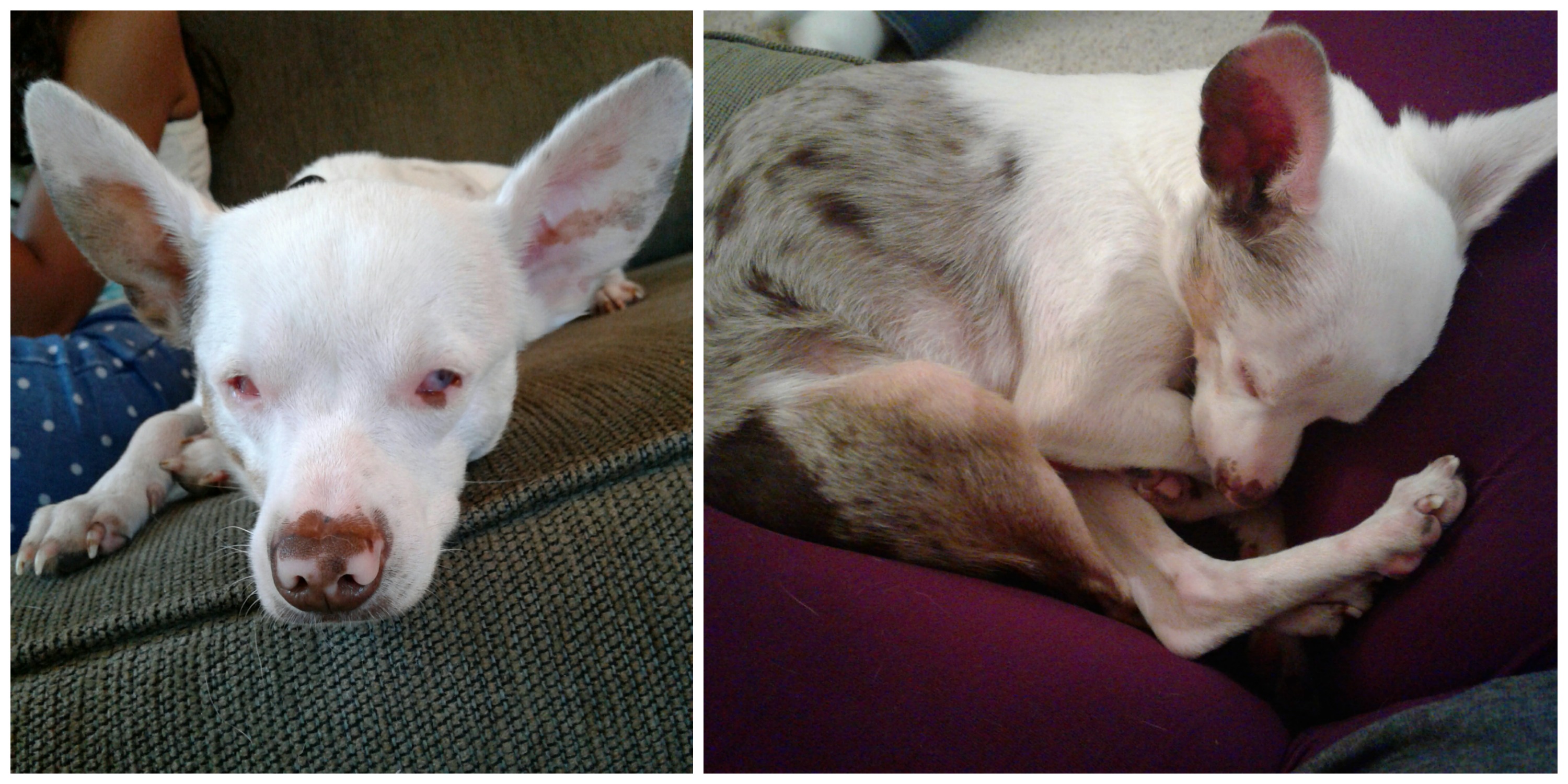 Bilbo’s mom is glad that she had an attitude of, “adopt-don’t-shop” because if she hadn’t, their family really would have missed an opportunity to bring an extraordinarily unique superhero into their lives. Many people that they come across, whether in and out of their community, thank them for being such heroes for taking in a special needs animal. The truth is, Bilbo is the super hero who taught their family many needed lessons that you can’t learn from a book, but only by example. The pure lessons of gratitude, love, acceptance, bravery, vulnerability, and more importantly, the joys of living in the moment. Bilbo’s strength in happiness is an incredibly humbling experience.

Spending this beautiful evening at the City of Rocklin dog park in Rocklin California. This dog park even has a “special needs area” for special dogs like me. #rocklin #dog #dogs #rocklinca #rocklincalifornia #specialneeds #dogparkfun #dogpark #specialneedspets

The ears on this guy…#ears