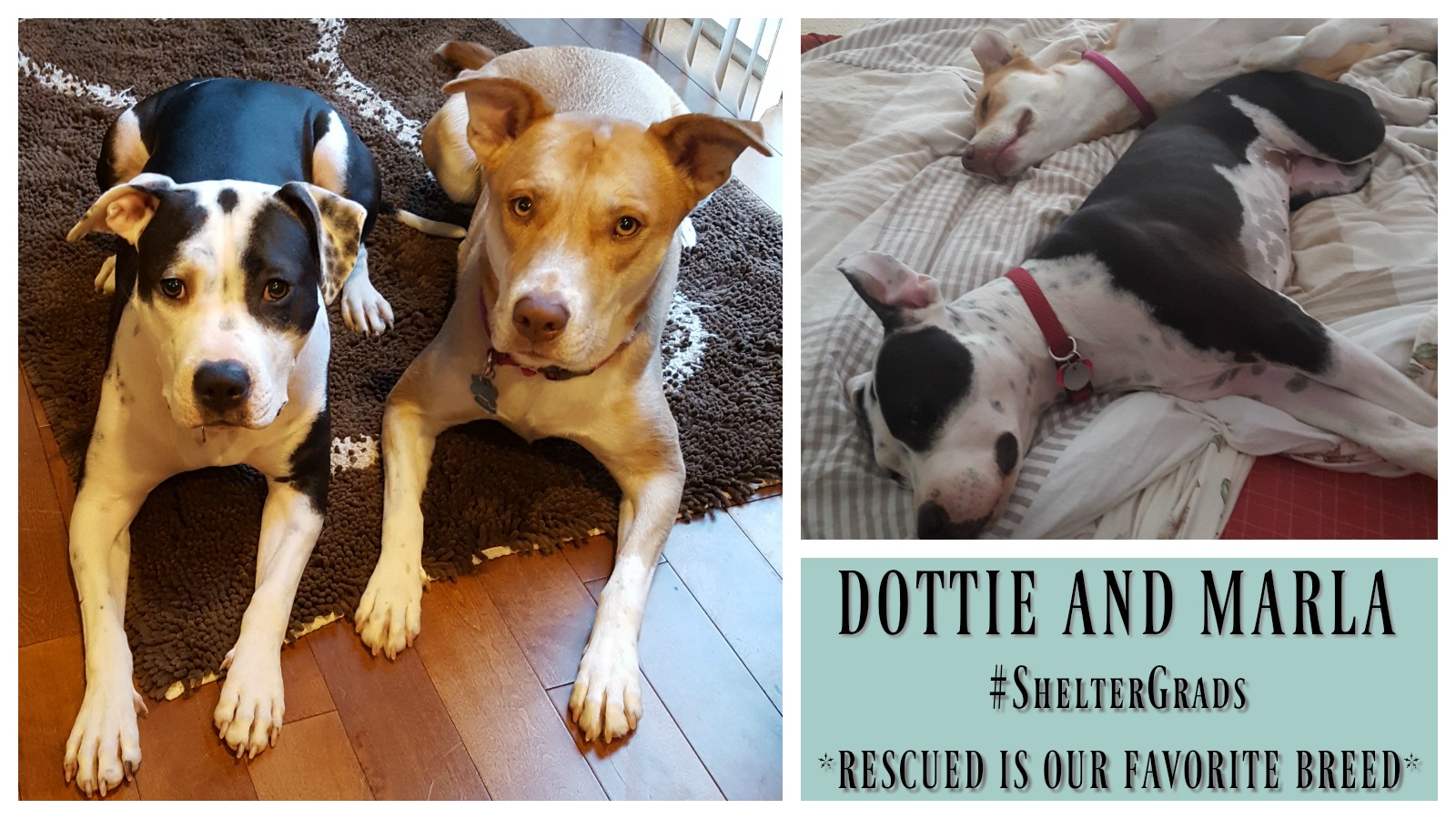 Marla was adopted by her forever family in September 2014, when she was just five months old. She was given to shelter/animal control in Pasco, WA at three months old and was adopted once before but then returned. Mikey’s Chance Canine Rescue of Kennewick, WA pulled her from the shelter, named her Marla, and placed her in foster care for two months. She was spayed, got up to date on all her shots, and beat kennel cough! 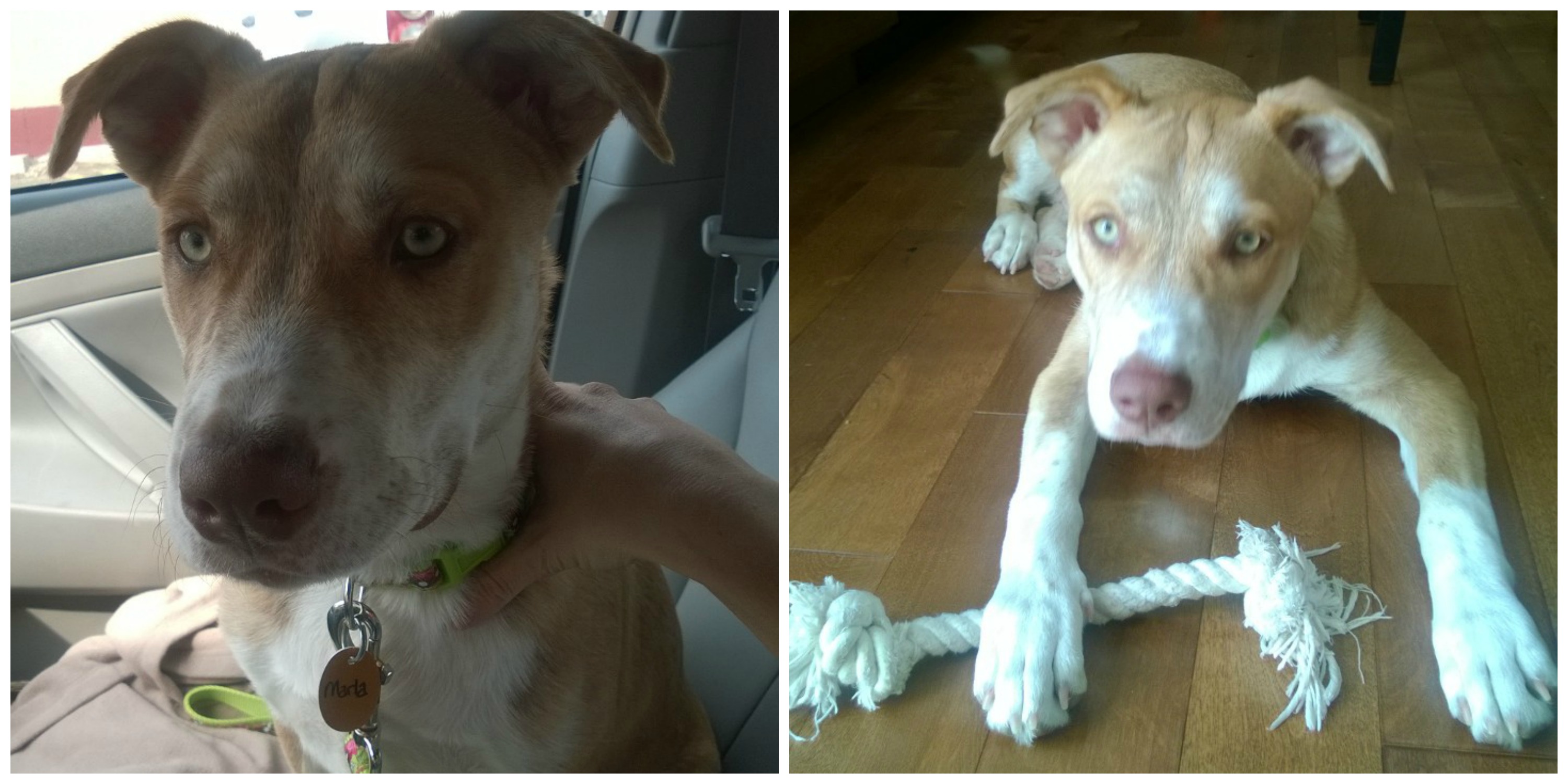 Marla’s forever family found her online and knew she was the right dog for them from the moment they saw her! The last of their pair of Min Pins had passed away, and they really wanted to rescue a medium to large female dog that wasn’t too hyper, but still had enough stamina to go running and hiking with. The rescue took a while to process the applications, and her family was SO excited when they found out their application to adopt was approved! On the three hour drove to pick Marla up, her forever mom wondered what she was doing adopting a dog, sight unseen, but she had nothing to worry about!

Marla’s foster family did an amazing job with her and she was already potty and bell trained. She’s now three years old, and she’s a great mix of energetic but not too crazy. She almost never barks, loves walking, running, hiking, playing with her adopted fur-sister, Dottie, and is OBSESSED with food and treats. She has several little idiosyncrasies: she constantly licks everyone on the mouth (including leaping straight up to do so to unsuspecting strangers and visitors), pulls on the leash at the beginning of every walk (no matter what harness or training technique her mom tries), hates being touched when she’s sleeping, and hides in her crate if you even touch the drawer with the toenail clippers. Her forever family loves EVERYTHING about her! 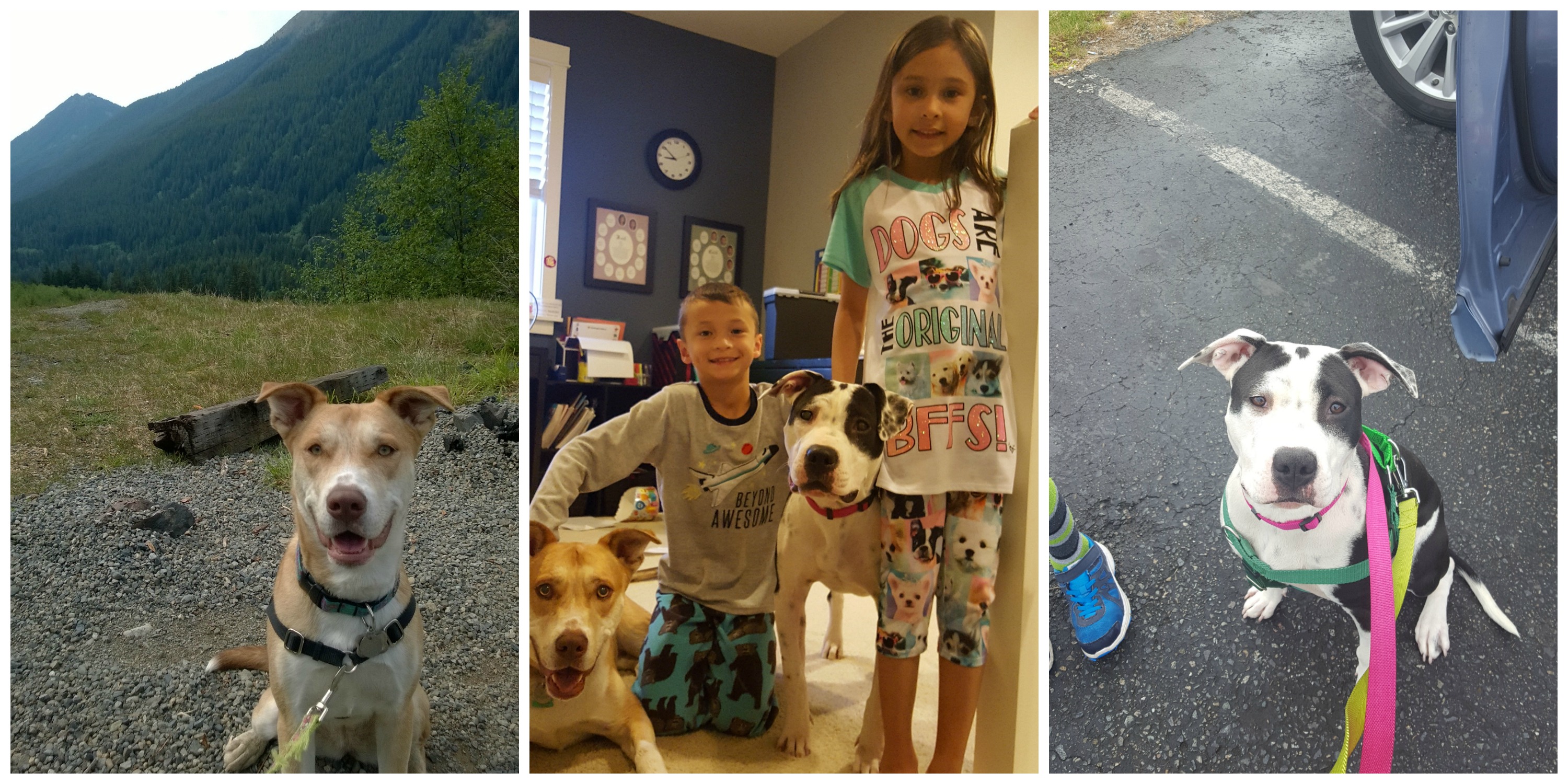 Dottie was adopted in May 2016, when she was about a year and a half old. Her forever mom had been following Saving Great Animals Rescue (in Seattle) on Facebook for a while and they were constantly asking for fosters for dogs being rescued from kill shelters in CA. They had posted a video from a shelter of two female Pit Bull mixes, in which the shelter worker said that they needed immediate rescue or they’d be euthanized the next morning. Thankfully, SGA committed to rescuing them. Dottie’s forever mom had finally gotten her forever dad on board with the idea of fostering and possibly adopting a second dog. When she got an email from SGA regarding urgent fosters needed, she saw the dogs from that video on the list and she just had a feeling that they needed to foster Dottie (she was named Dottie by SGA, who had only seen pictures of her, but decided it fit because of all her spots). Dottie was pulled from a disgusting shelter in northern CA and transported up the coast with a van load of other dogs being rescued by various organizations. 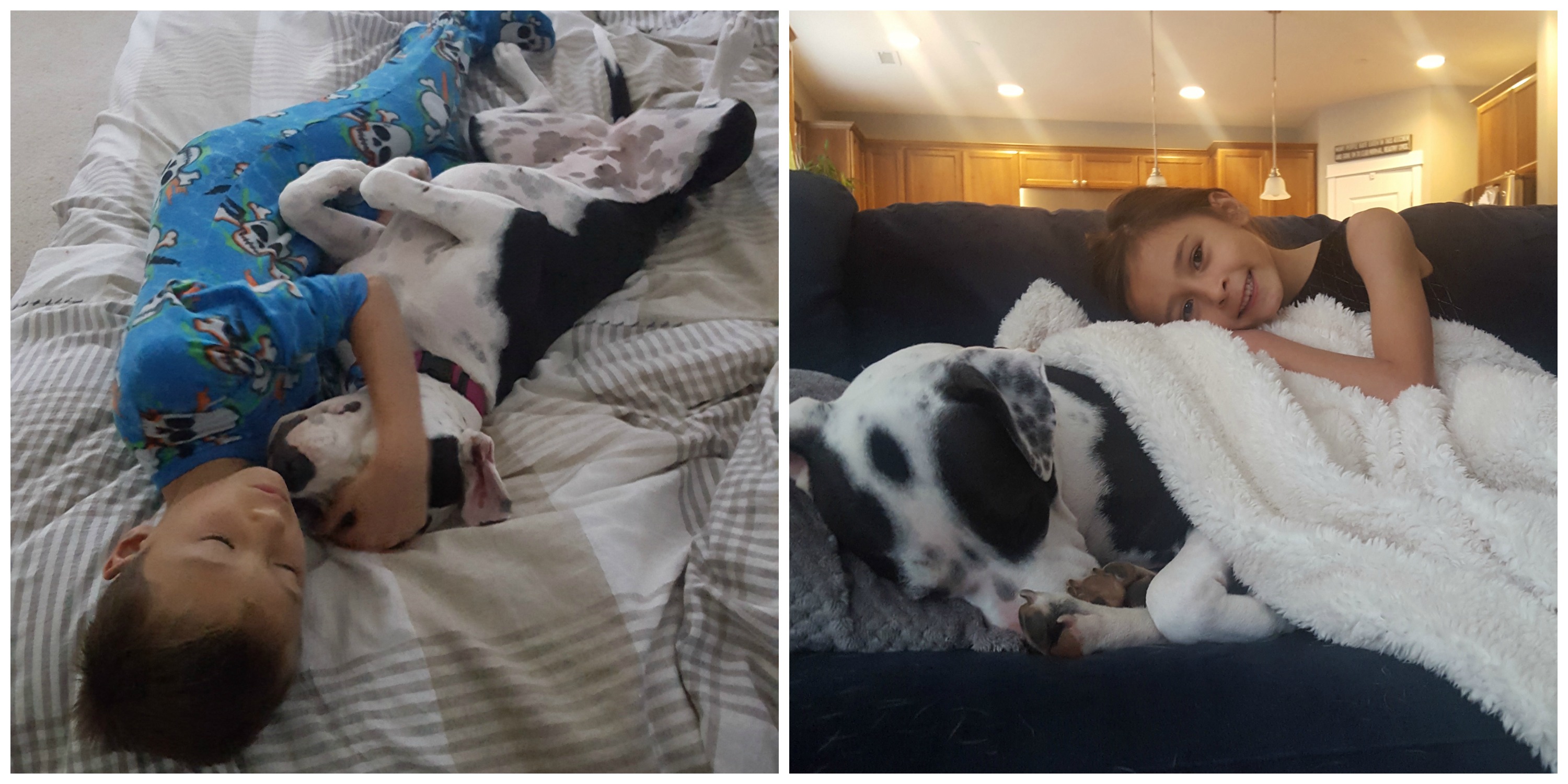 Dottie’s mom and her human brother met the van at a truck stop about forty minutes from their home. She was dirty, underweight, had a scar, some scabbed cuts on her leg, and had tapeworms. The shelter had vaccinated her, but had not bothered to spay her yet because they planned to euthanize her if nobody had adopted her or rescued her within three weeks. The paperwork from the shelter said that she was found as a stray on the streets in Modesto, CA. 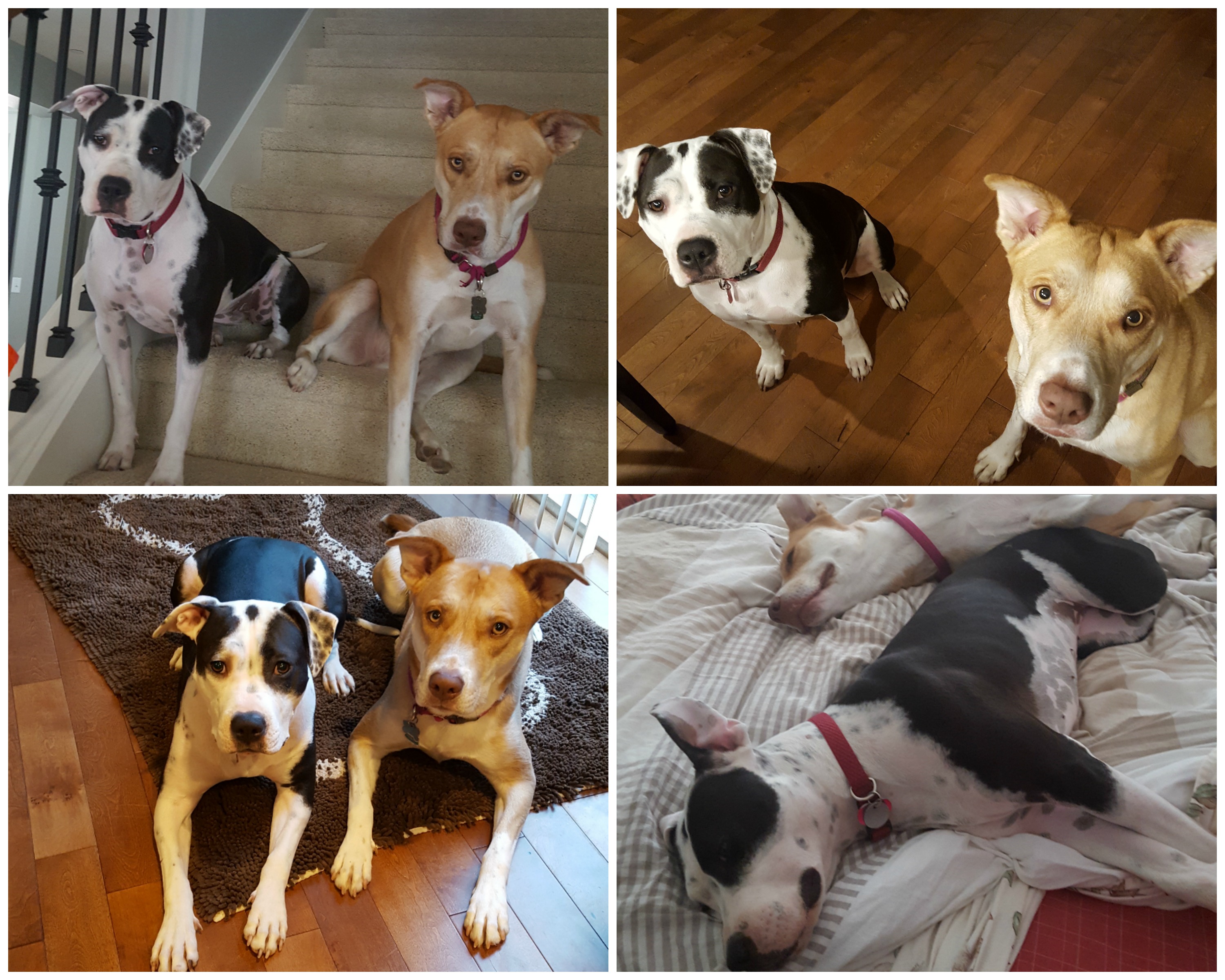 Dottie immediately found her way into her forever family’s hearts. She loved her human siblings and played so well with Marla. Within five days, Dottie’s mom emailed the rescue and asked for adoption paperwork. They got her vetted and spayed and now she’s healthy as can be! She is patient, gentle and the biggest bed-hog and snuggle dog ever. She also rarely ever barks, and she’s great with other dogs and humans (not great with small critters, however – she almost ate their guinea pigs!), and loves to be active, but isn’t hyper. She’s an awesome ambassador for her breed (Staffordshire Terrier)!

Just me, Dottie, sitting here hoping to win #StellaBsFirstGiveaway because we love cutie Stella’s photos (go follow her @pitbull_stellab ), Mom loves all those vendors involved in the prizes, and dang those treats Stella’s giving away look yummy!!! #pibble #pitbullsofinstagram #PittiesOfInsta

Candid shot of us basking on the deck in the rare minutes of sun yesterday in between the thunder, lightning, hail, and fab rainbows ☉⛈🌈 We have also decided to enter #bandanacookiesmodelsearch – Mom really wants to try their fuzzy backed bandanas because I (Dottie) LOVE soft things, plus soft stuff is perfect for while my neck scar is still healing. We think we’d be great models because there’s 2 of us so we can provide different looks, and we live in a beautiful area 🌲

Eek, we nearly missed it! Mom keeps deleting our derp photos and forgetting to enter! She found one more picture 😉 This is my entry for the #BourbDayDerpDay contest hosted by @bourbontheambully @goodlegram @koda_and_rue and @lincoln_the_pointeraner It ends today, so enter quick, furiends! #derp #derpdogs

⬅SWIPE to see them all (last one is Mom’s favorite outtake 😂) The sun came out for a bit last night, and Mom wanted an excuse to take a break from mowing the grass, so she put on some of our newer @20pawz12clawz bandanas for a little photo shoot. I (Dottie) have been wearing my human sister’s pink neck gaiter to keep me from scratching at my stitches and Mom figured out she can tie a bandana loosely over it for photos 😆 • •🐾 Follow our pawtners @dominothecow @adventuresofmaisie @bear_alex_ander @abullynamedscout @missmeeka1308 🐾 #20pawz12clawz #dogsinbandanas #dogsofinstagram #americanstaffy #amstaff #dontbullymybreed #staffysofinstagram #pibble #pitbullsofinstagram #rescuedogsofinstagram #huskymix #bullterriermix #weimaranermix #supermutt #muttsofinstagram #prettyeyespup #adoptdontshop

Sorry long post! 😉 Last night in the midst of our prize box excitement we got the mail and found a special surprise gift!! Our friend @missmeeka1308 wanted to do something special for us because of Dottie’s tumor/surgery and because Mom’s having surgery soon too. She collaborated with the Mom of @gibsonthegoober who owns @gstopybowtie and they designed special bowties just for us!! That is the sweetest gesture, plus our first ever bows AND they’re named after us!! ❤❤❤ Mom says that her faith in humanity has been restored (whatever that means!) since setting up this account. Mom snapped a couple pics of Dottie in the yard last night, but when we went outside to take photos today, it started pouring on us! 🌧 (See last pic). We came inside and used the yummy yaky charms that Meeka gave us back when we won a prize from her giveaway to take a few inside pics instead. Thanks SOO much Meeka and Gibson and Moms!! • •🐾 Follow our pawtners @dominothecow @adventuresofmaisie @bear_alex_ander @abullynamedscout @missmeeka1308🐾 #gstopybowtie #somuchlove #dogswithbows #stopyulin #rescuedogsofinstagram #pibble #americanstaffy #amstaff #dontbullymybreed #staffysofinstagram #huskymix #bullterriermix #weimaranermix #supermutt #muttsofinstagram #dogsofinsta

Franken-Dottie 😢 is home from surgery. The procedure went well but they had to take a large area to be sure they got it all and it won’t return. We’ll have the pathology report and tumor grade in a few days which will let us know if any further treatment is needed (paws crossed for no). For now she’s resting under the watchful 👀 of nurse Marla. No play wrestling until stitches come out in 10-14 days…that’s gonna be the hardest part! Thanks so much for all the well-wishes furiends! ❤❤ •🐾Please give our pawtners a follow!! @dominothecow @adventuresofmaisie @bear_alex_ander @abullynamedscout @missmeeka1308 🐾 #surgerysucks #stitchesformiles #lostafewdotstoday #rescuedogsofinstagram #americanstaffy #amstaff#dontbullymybreed #staffysofinstagram #pibble