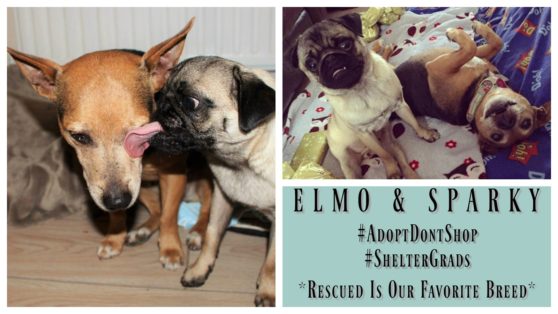 Elmo, a Pug mix, was rescued at 3 and half months when he was imported from Slovakia in the illegal puppy trade. He came into Dogs Trust Basildon, where his forever mom works, and she couldn’t help but fall in love with him! As she adopted him, little did she know that this poor little boy had serious health issues. He had a crushed third vertebrae and a hemivertabrae, which caused him to lose the use of his back legs. He underwent his first surgery and started to heal nicely, but six weeks post-op, he started to deteriorate and lost the use of his right, hind leg. He had to undergo surgery again to fix his spine from the hemivertabrae so that he could hopefully walk again, but unfortunately, it left him severely paralyzed. Nine weeks after his second operation, he started to move his back legs! He can’t walk on them without help, but can stand for a little bit on his own. Elmo is such a happy boy with a ton of personality and love for everyone he meets. He more than deserves his second chance at life.

Sparky, a Staffordshire Terrier mix, was brought into Team-Paw Rescue, a small non-profit. Team Paw Rescue pulled her from a local pound before she was to be euthanized. Previously, she was living in a gypsy camp. Sparky had scars all over her face, possibly from badger bating, but to this day, her full backstory is unknown. Over time, she has become more confident, and loves her adopted brother, Elmo. She has a heart of gold and is extremely lovable.

Despite everything that Elmo and Sparky have been through, they are full of love!

It’s my first birthday today, ????????I got spoilt and had lots of cuddles of my mummy and my sister. #1stbirthday #pug #birthdayboy #rescuedog #playtime #cuddles #bigboynow????

My sister also got a new bunny she said it has ears like her ????????#staffycross #toys #cute #bunny #rescuedogsofinstagram

Nanny brought me one too, so now we have a big bone each to keep us occupied ???? #happy #pooches #bigbones #rescuedogs #puppy #pug #staffycross