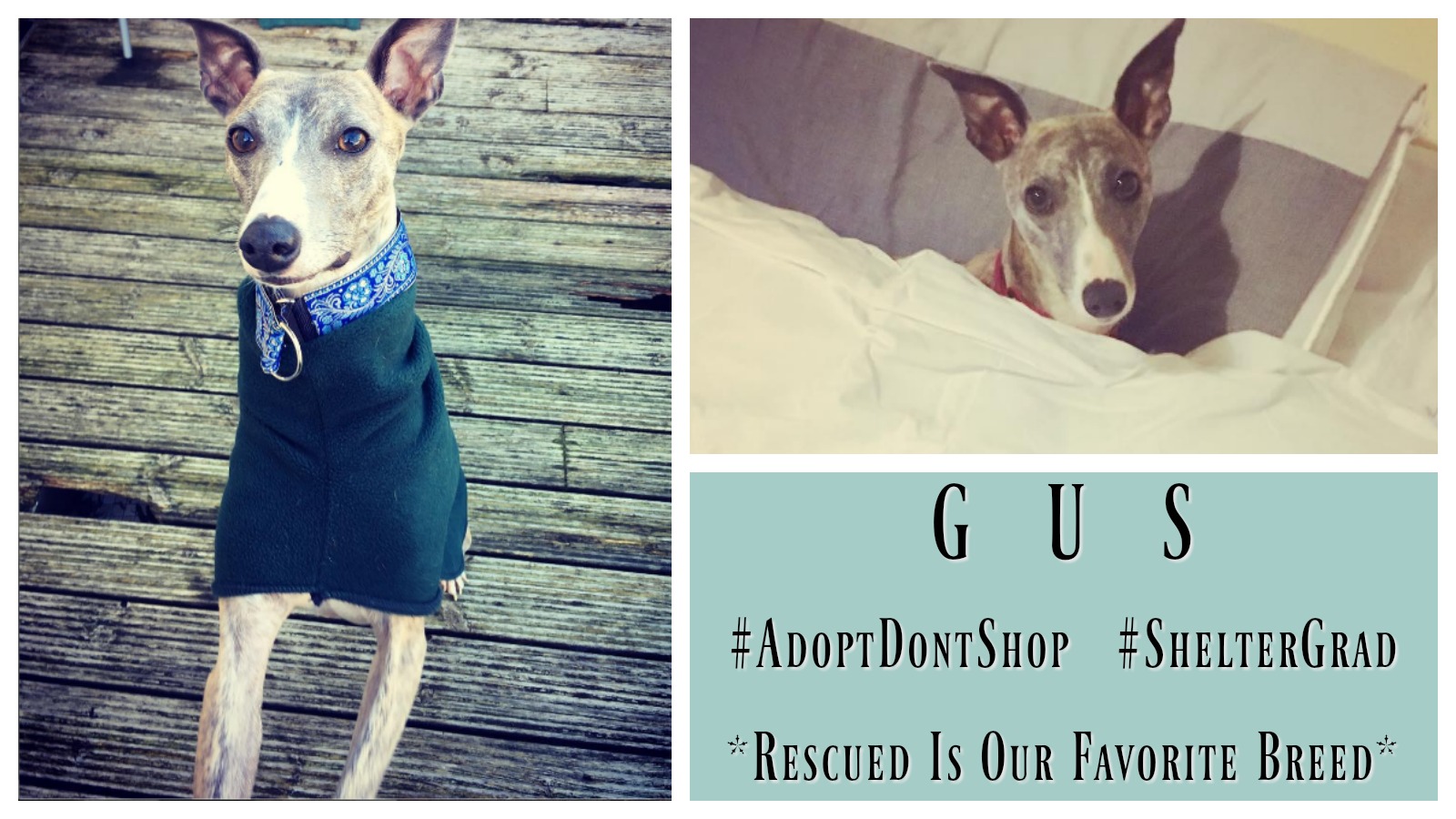 Gus’ forever mom, Kelly, rescued him from a local animal sanctuary called Deise Animal Sanctuary in Waterford, Ireland. Gus (previously Cody) came to Deise as a welfare case (both of his back legs were broken when he was run over by a trailer). The dedicated team at Deise provided him with all the veterinary care he needed and nursed him back to health. With the help of the whole team, Gus was running around on all fours again!

Kelly met Gus on a visit to the sanctuary when she was donating some dog food. She did not plan on getting a dog, but when she met Gus, she knew she had to try take him home. Kelly enquired about adopting him and was told to come back the following week to meet the owner of the sanctuary. Rescuing a dog isn’t something that should be rushed, so she was happy to have the week to be certain that she was fully committed. While Kelly was waiting, she decided to find some information about Gus and discovered that he was actually a permanent resident at the sanctuary. This discovery made her nervous, as she did not know if she would be able to adopt Gus. When Kelly returned  to the sanctuary, she was greeted by the owner who agreed to let her take Gus. She was happy for him to go to his forever home, so Kelly signed the adoption papers and took him home!

The first few days were difficult — Gus was afraid of everything. He was scared of cars, loud noises and even people. His tail was constantly between his legs and he was unsure of his surroundings. After some time and a lot TLC, Gus has come out of his shell and he is now a happy and playful pup. He no longer fears cars and he absolutely loves going on car trips. He is slowly becoming more confident in himself and he is learning not to fear people. Gus isn’t an easy dog, as he requires a lot of work and attention. Despite his flaw, Kelly wouldn’t change him for the world. Rescuing Gus has been such a rewarding experience and she encourages everyone to consider adopting a dog instead of buying a puppy. By rescuing a dog from a pound or shelter, you are saving a life and giving a him/her a second chance.

Kelly decided to make Gus his own Instagram account so that she could keep a record of his progress and show people how great rescue dogs are. Gus is a normal dog who just wants to love and be loved. He loves to eat, sleep and get up to no good! He also likes to explore, which has led to him wandering off and jumping out the sitting room window, so he needs to be watched 24/7. He loves to go on adventures, so his Instagram accounts keeps track of his expeditions.

I love when my mom works the night shift cause it means I can sleep all night and then sleep in her bed when she comes home ???????? I love sleep ???????? #lazybones #whippets #sleepypuppy #ilovesleep #sleepislife

Thanks to @leosomekindofpointer for tagging me in the #thesepawshavemyheart. Here I am looking cute as button ft. my little paw paws ???????? #instadog #whippet #whippetsofinstagram #adoptdontshop #rescuedogsofinstagram #rescuedog

Me and Bear at doggy daycare. She was soo excited she couldn’t pose for the picture properly ???????????? #rescuedogsofinstagram #whippetsofinstagram #instadog

This is Fred, I have claimed him. He is now my teddy not yours ???? #teddythief #istoleit