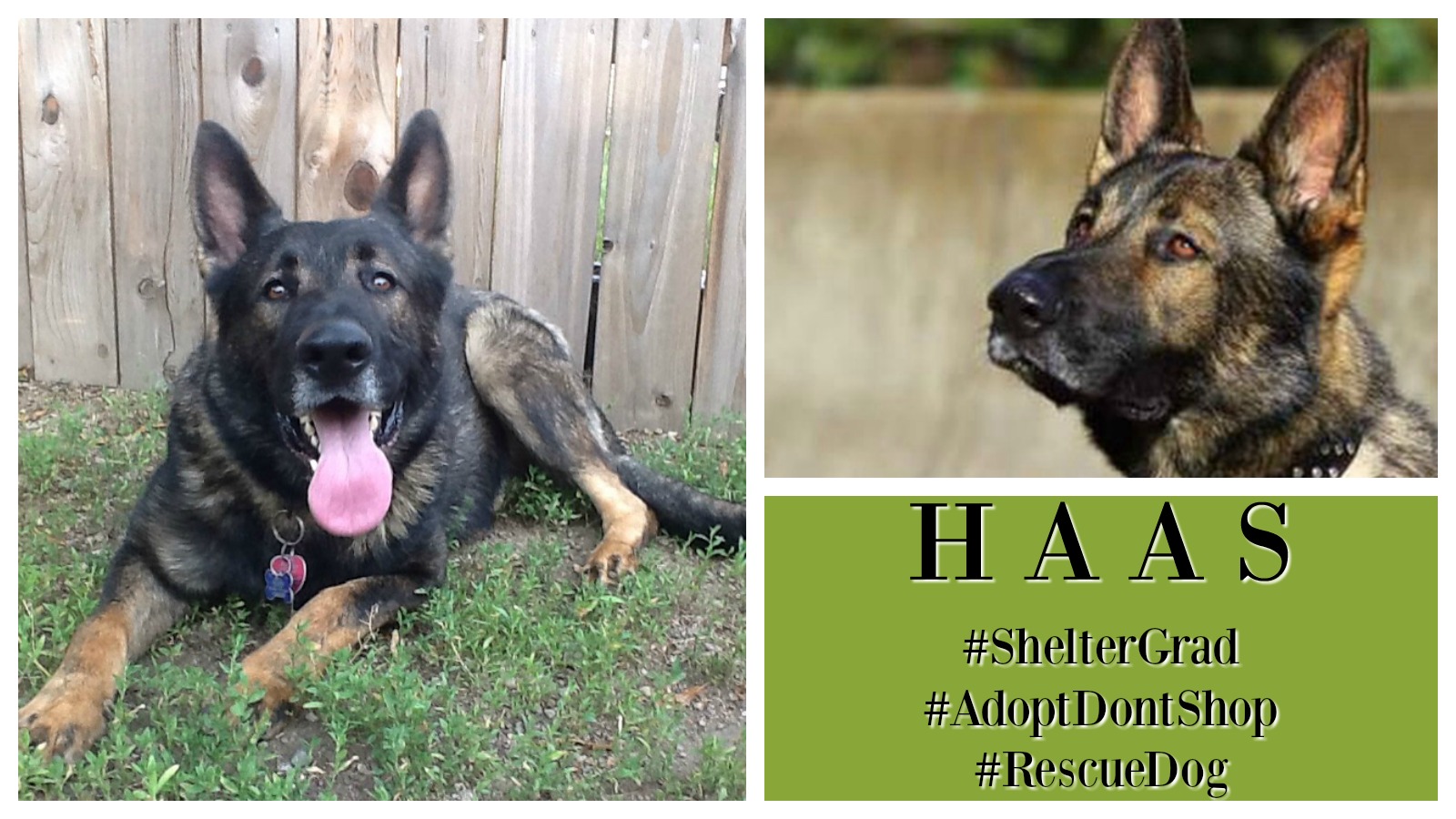 “You found parts of me I didn’t know existed, and in you I found love I no longer believed was real. I love you Haas boy!!!”

Haas’ backstory is still a little unclear, because unfortunately, humans aren’t always truthful. When Alicia met Haas for the first time, she was a kennel hand for a local dog kennel called Camp K9. Haas was skinny and covered in dog poop, from head to paw. Half of his tail was hairless because he was chewing on it. He wasn’t in this state because he was being neglected by the people at Camp K-9.  In fact, he was getting the best care and attention he had gotten up to that point in his life. He was bathed several times a week, his kennel was cleaned several times a day, and he was eating the highest quality dog food.  Despite all this, he still looked the way he did. 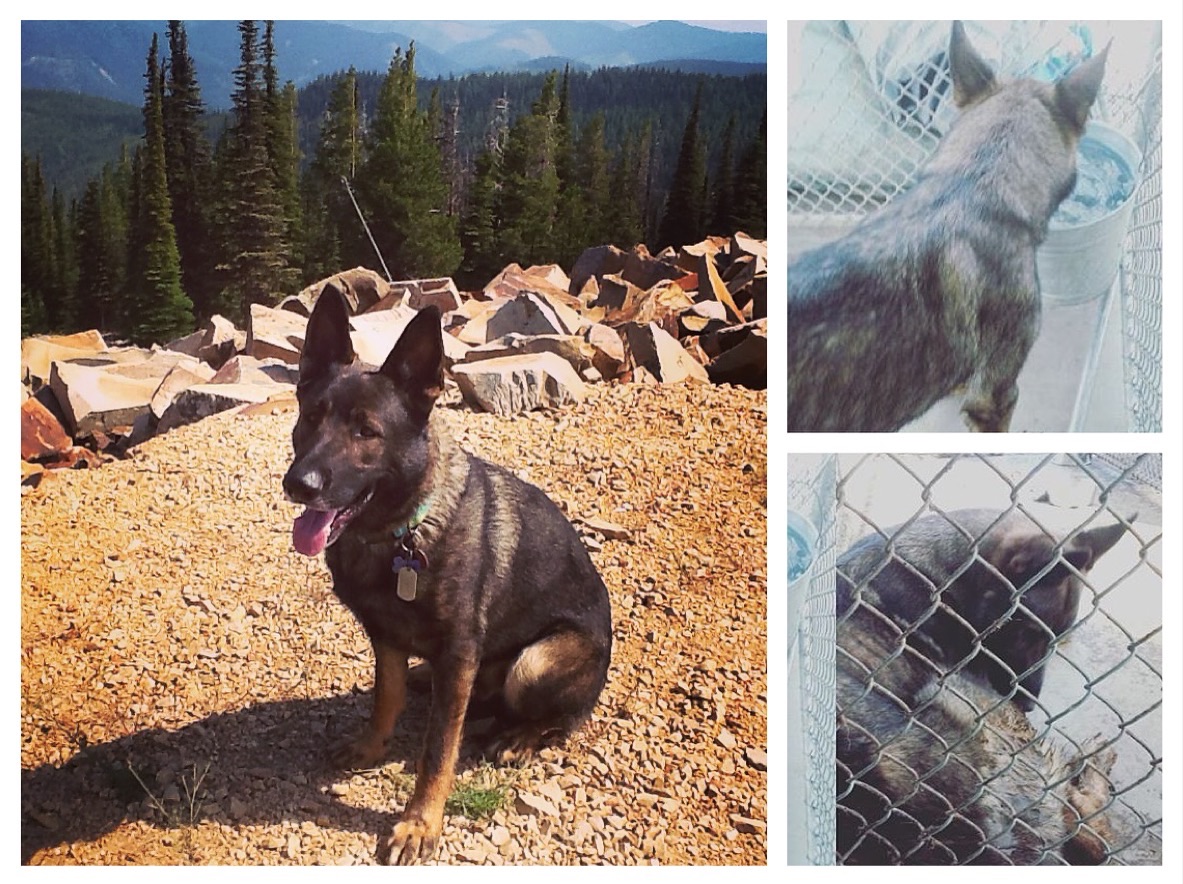 Haas, originally from Arizona, was bought as a puppy, and eventually moved to Idaho with his first “family”.  Alicia was told that while with his original family, he had jumped a ten foot wooden fence, entered a neighbor’s yard, and killed another dog. Because of this, Post Falls Idaho Animal Control had seized him, and due to state and local laws, had to quarantine him to confirm he did not have rabies.   Meanwhile, Haas’s humans were told that they had to choose between him and the house they were currently renting. They chose the house and told Animal Control to put Haas to sleep. Fortunately, some kind hearted Animal Control officers refused to let Haas die.  They knew of a local trainer at a dog kennel (Camp K9) and contacted him. Haas had lived at Camp K9 for a year when he first met his forever mom. 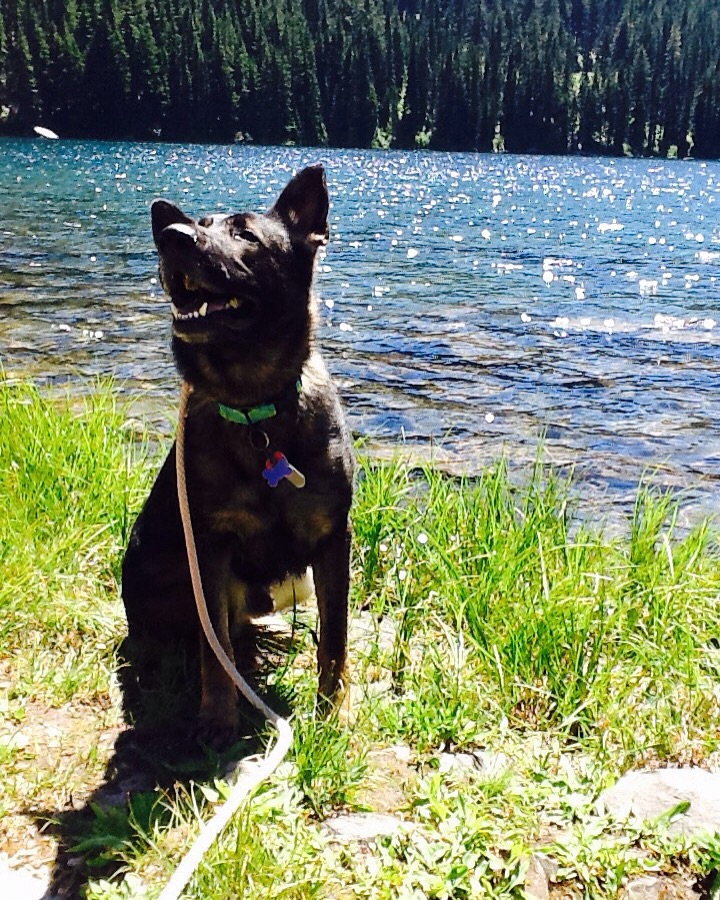 Alicia met Haas when she was 22 years old.  She was a single mom of a three year old, and a furbaby, Bella (a Red Heeler). She was juggling her bills, struggling to get out of an abusive relationship with her child’s father, as well as balancing her new relationship with her then boyfriend (now husband).  She had just started working at Camp K9, and was chasing her dream of working with animals again.
During her first day at Camp K9,  Alicia’s boss approached her and asked, “Want a Shepherd? I have one who needs a forever home, and you can take him with you today. No adoption fee.”   When Alicia and her boss visited Haas, Alicia saw that his kennel was covered in feces.  She stepped back and thought “Nothing in life is free! He will probably do the same to someone’s house” and decided not to take him home with her that day. 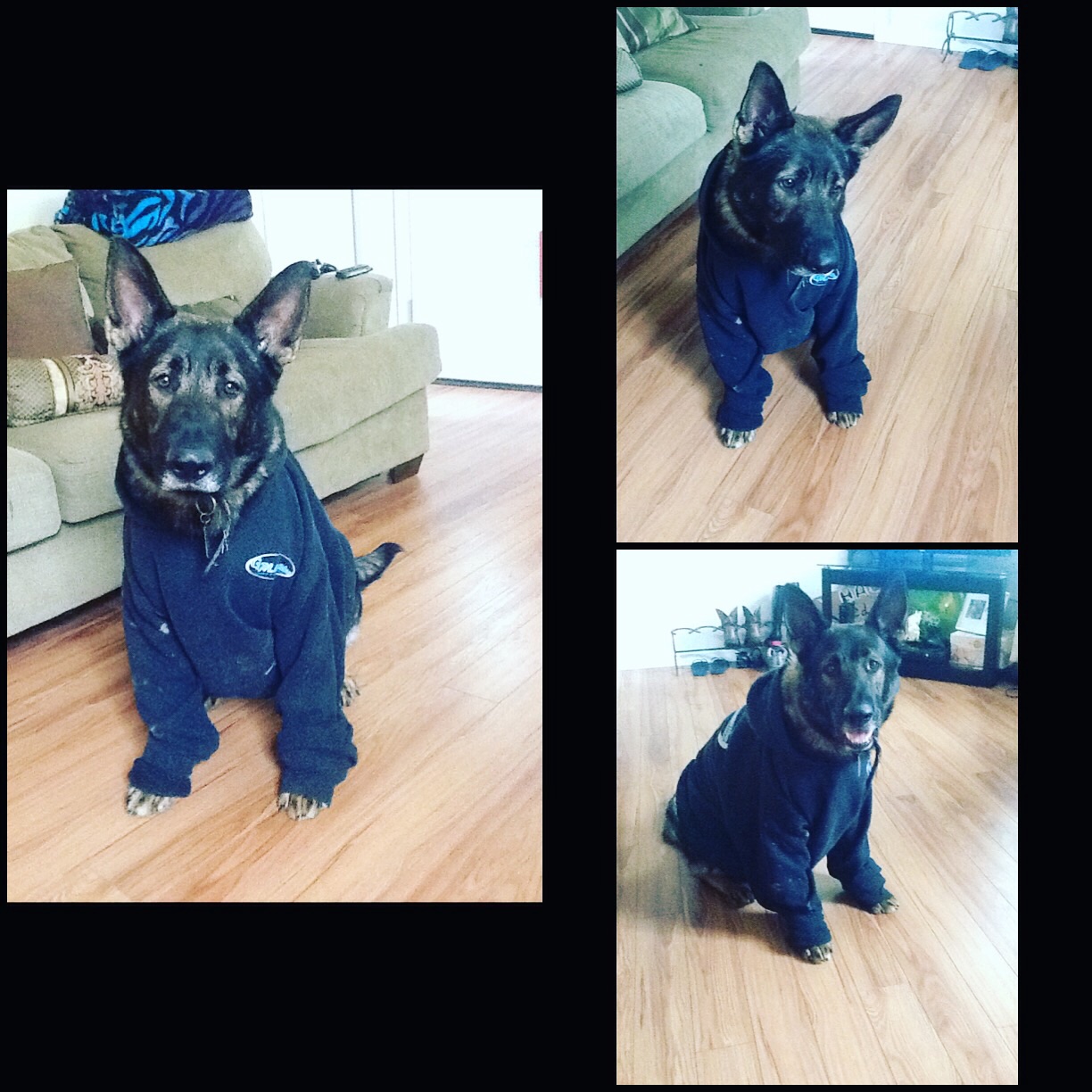 Weeks passed, and Alicia started asking questions about Haas.  She was heartbroken that he had not found his forever home yet and was even more heartbroken when she learned about his past.  Bella, Alicia’s dog at the time, was pulled from another local shelter and her previous furbaby, a Shepherd mix, was pulled from death row. She couldn’t fathom choosing her house over her dog.  After looking through his papers, Alicia discovered that she and Haas shared the same birthday…February 12th! Perhaps it was a sign. 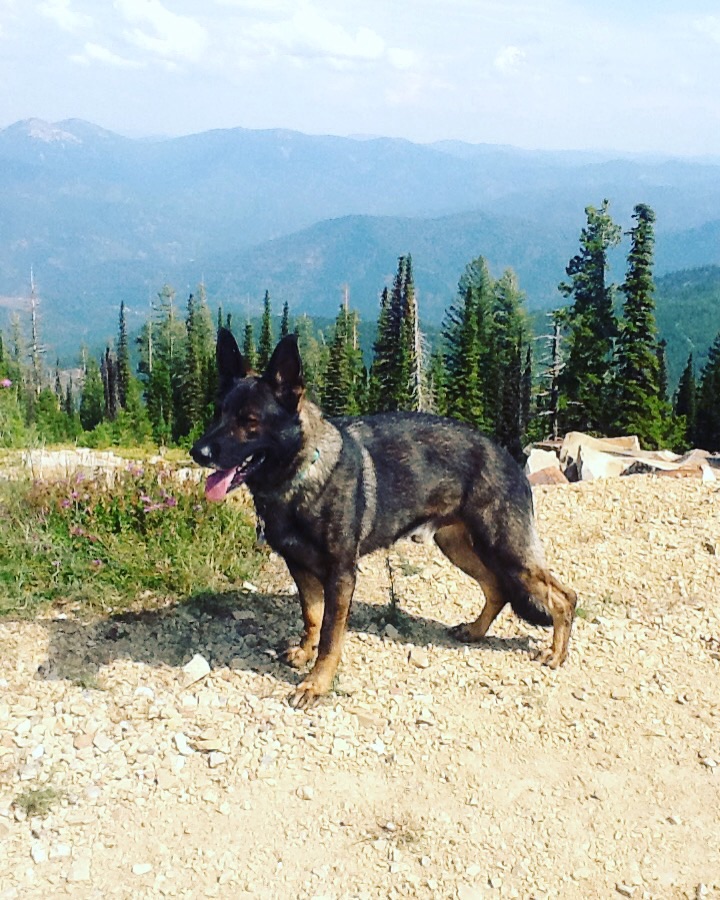 Several more weeks went by, and Alicia was even more heartbroken for Haas.  She tried so hard to gain his trust, yet he remained disconnected. He even accidentally bit her while she was trying to play with him. Alicia believes that Haas had forgotten how to be a dog.  However, after weeks and weeks of trying, Alicia finally earned Haas’ trust!  They now played in the yards together, and she bathed him daily.  She did everything she could to make him happier at the kennel.  During a Camp K9 staff meeting, Haas was brought up.  Everyone wanted to try to find him his forever home before the holiday rush.  And in that moment, Alicia couldn’t imagine her life without Haas.  Her heart broke a bit, but she didn’t say anything. She had swore to herself that after her last Shepherd passed, she would never let another on into her heart again.
Alicia eventually broke her promise to herself, and decided to try to make it work with Haas, but she had her concerns  Haas apparently wasn’t good with kids, and was allegedly “dog aggressive”. How would he get along with her young daughter?  How would he react to Bella? 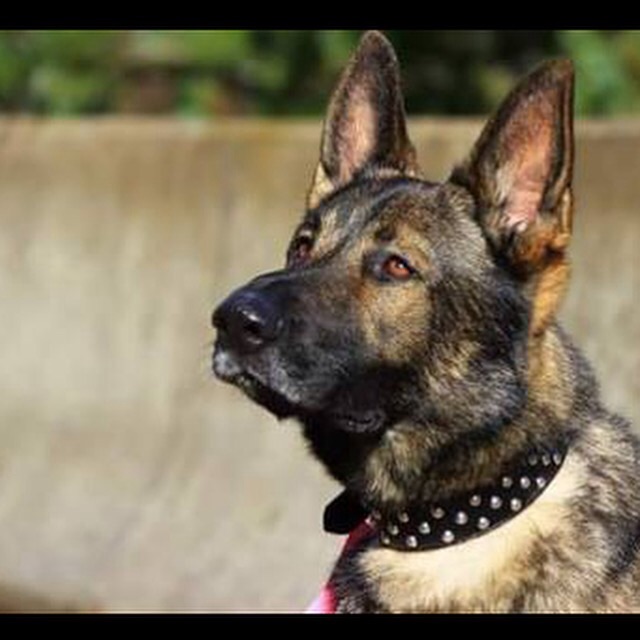 Alicia introduced Bella and Haas through a fence everyday for a week before she finally brought him home. When she loaded him into the car, she remembers that he kept looking back to the kennel and back to his new pawrents and it looked like he was thinking, “Wow…am I really leaving?” Bella was, naturally, jealous at first, but soon enough, she was cuddling with Haas, a dog that animal animal control deemed “dog aggressive” and “unpredictable”.   Haas napped with Alicia’s daughter and ate out of the same bowl as Bella.  Alicia was amazed that Haas was almost put to sleep because his former owners didn’t want to give him a chance. Sure, Haas caused a few problems:  he chewed up his new mom’s car, he chewed a hole in a leather couch, he broke the fish bowl, and he still had a pooping problem.  Some people would have given up on Haas, but not Alicia!!  And thank goodness she didn’t give up on him, because he ended up saving her life. 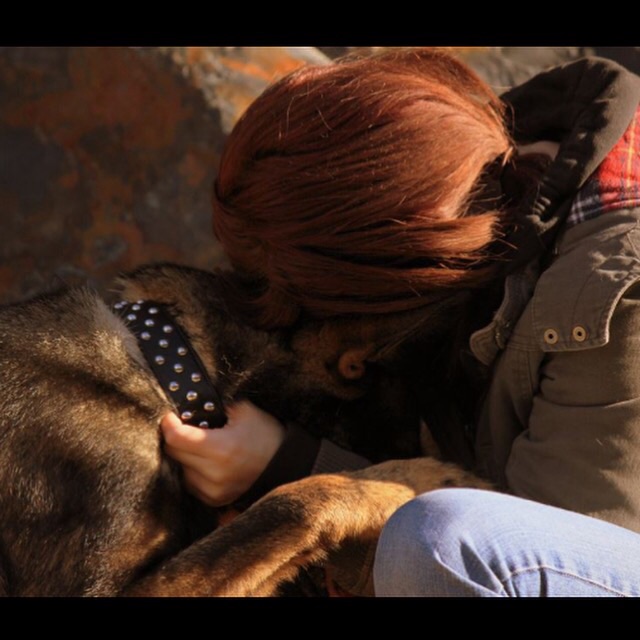 October 17th is a night that Alicia will never forget. She had no idea what lay ahead when she started her 55 minute commute home.  That night, Haas showed his forever mom his loyalty and gratitude for simply giving him a chance.  If it wasn’t for him, she could have died.
Alicia got home from the dog kennel later than usual, because she took Haas to work with her, so she had to bathe him and dry him. Alicia pulled into her driveway and noticed that all of the lights in her house were off, which she found suspicious, because she always leaves a light on.  Alicia tried called her husband (boyfriend, at the time), but he didn’t answer. Alicia locked her daughter and Bella inside her car, and took Haas with her into the house to investigate. As soon as she opened her front door, Haas started to act strange. He was antsy and started barking and growling viciously. As they entered the master bedroom, the closet door swung open and someone ran out and through the back door. Because of Haas and his warnings, Alicia knew there was an intruder in her home, who the police eventually caught. Alicia truly believes that if Haas wasn’t with her, the outcome could have been much, much worse.  She will always be grateful to him, and believes he saved her life because she saved his. After that day, Alicia vowed to never let Haas return to life behind chain link.   They belonged to each other and were now a team. She’ll always be there to take care of him and protect him, as he did for her on that fateful night. 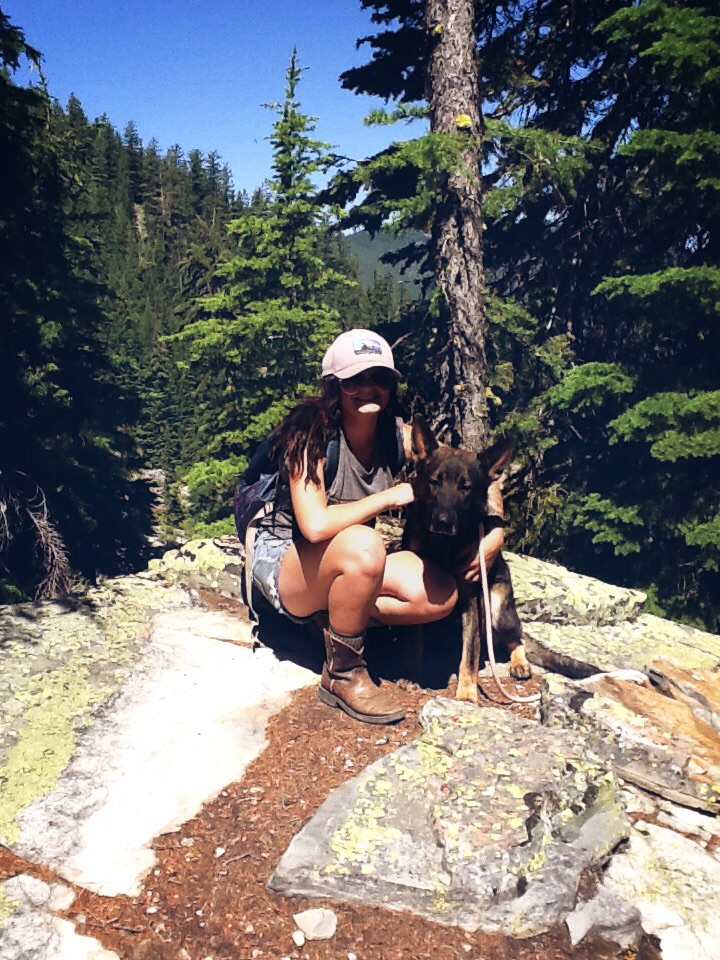 The holidays came and went, and Haas was more excited for Santa to come then Alicia’s daughter! Then Spring rolled in and Haas’ fur-sister, Bella, was diagnosed with epilepsy.  It seemed like Haas knew when she was going to have an episode, because he always stayed close to her. In April, Alicia and her family knew it was time to let Bella cross the rainbow bridge. Bella is missed everyday, and it is especially hard on Haas.  She taught him how to be a dog again.
Haas has now been in his forever home for a little over ten months.  He befriended a feral kitten, and brought her into the house. She has been an amazing addition to the family, and she and Haas are inseparable!  Haas’ Instagram page was created to help educate people on the Czech Shepherd breed, and to encourage people to do their research before adopting. 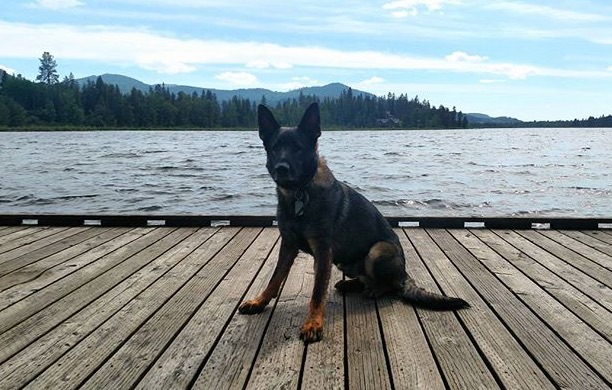 Alicia hopes her story opens peoples’ eyes when they are looking to adopt.  Don’t always believe what you are told about a specific dog or dog breed, and don’t give up.  One day, after rescuing your new furbaby, they may rescue you back.  Haas has taught Alicia so much about love, patience, and trust. It’s because of him that she was able to have the courage to love, and be loved again. He’s not just her best friend, but her rock.  Alicia may have rescued Haas, but Haas continues to save her everyday. She is a different person because of him, and she is currently looking into dog trainer programs so she can rescue and rehabilitate misunderstood bully breeds just like Haas. 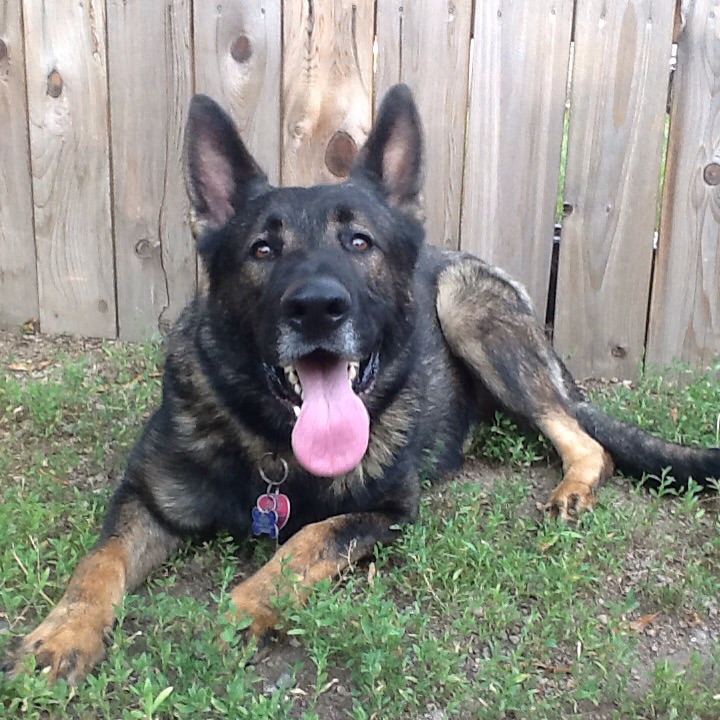 When you go to visit dad at work but get put in time out. #gsdofinstagram #czechshepherd #gsd #rescuedog

I adopted my best friend. Who else?! #pnw #opttoadopt #czechshepherd #rescuedog

Dogs have a way of finding the people that need them the most and filling an emptiness you didn’t even know existed. #opttoadopt #rescuedogsofinstagram #gsdofinstagram #czechshepherd