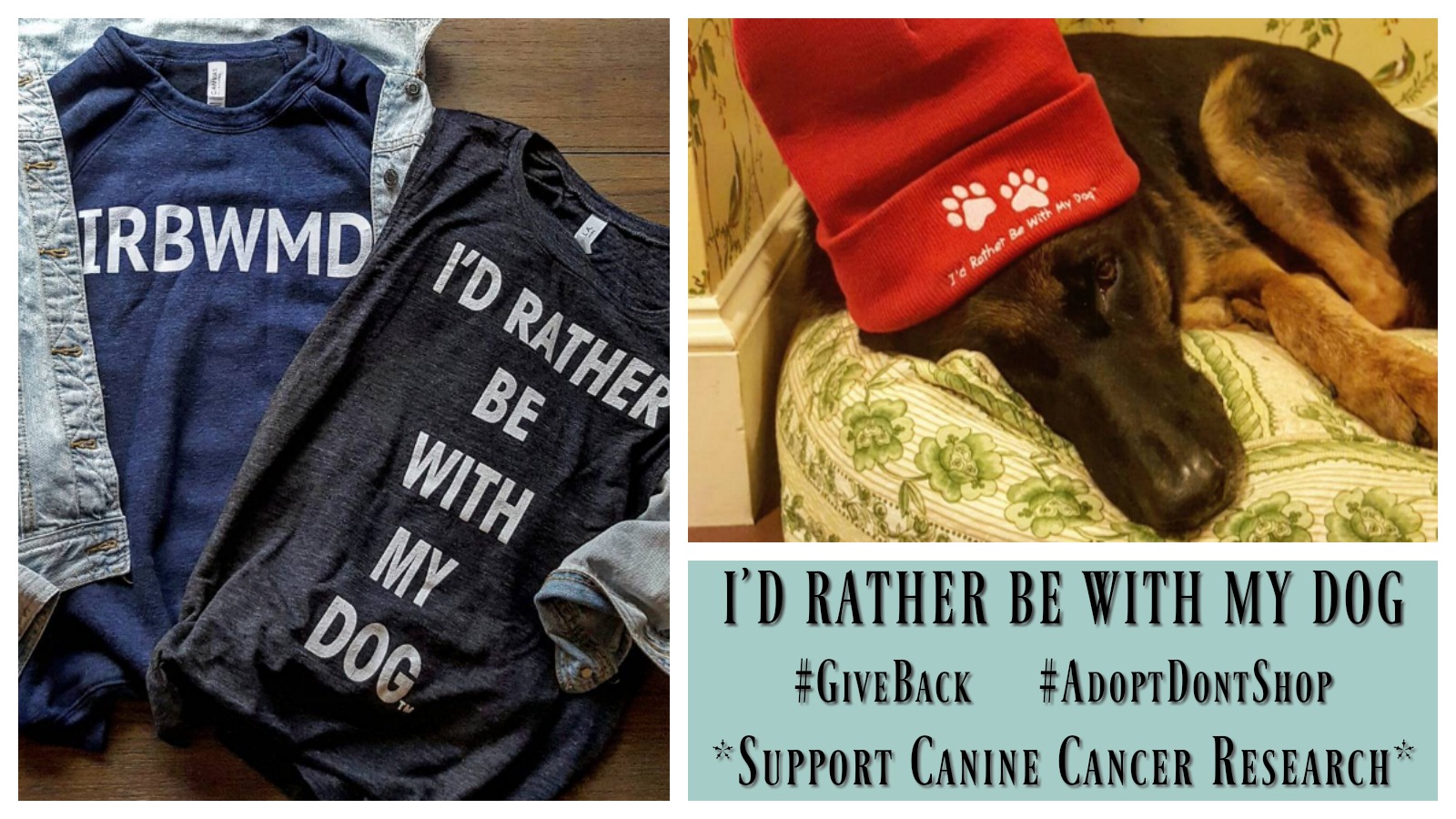 Doug Ratner was a professional musician and toured the country for fifteen years. At one point, he wrote a song called “I’d Rather Be With My Dogs Than Be With You”.  After the song started to get a lot of exposure and feedback from tons of dog owners, Doug said to himself, “I need to put this on a t-shirt”, and the rest was history! I’d Rather Be With My Dog (IRBWMD) has evolved from simple t-shirts, to high end women’s fashion pieces, to workout gear, to Paleo grain free dog treats. They have everything that an obsessed dog person would need or want!

The song that inspired IRBWMD 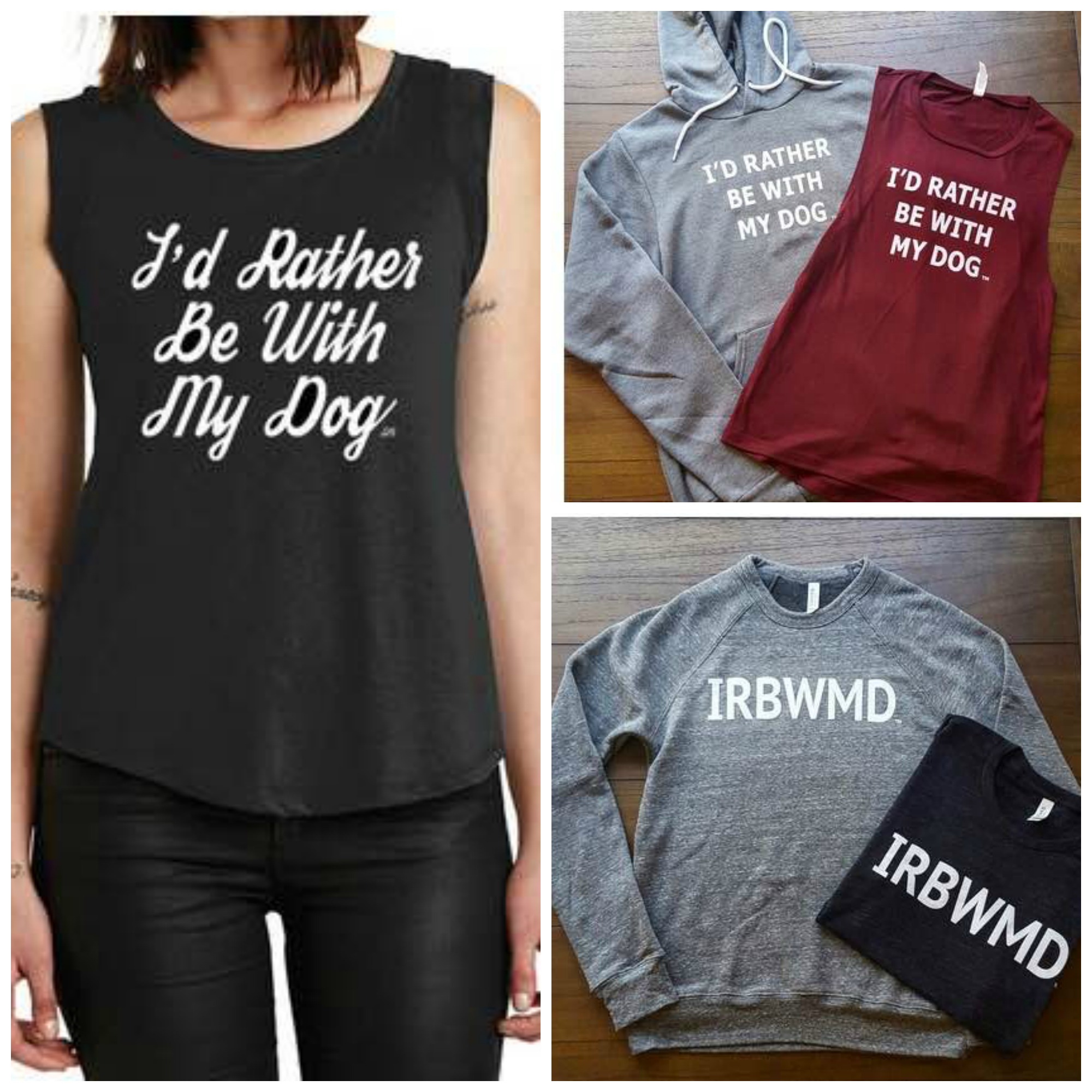 Every month, IRBWMD donates to a different cause or rescue.  Doug comes across a rescue on Instagram, on Facebook, or will do some research and decide to donate to them. Customers can also nominate a rescue or cause they are passionate about. This month, IRBDMD is donating profits to a variety of organizations that do canine (and other animal) cancer research. The National Canine Cancer Foundation, the Bark for Life Event, and the Morris Animal Foundation will be splitting up the donations equally. IRBWMD has also donated to Peaceful Passings Senior Animal Rescue, as Jackie, who runs Peaceful Passings Senior Animal Rescue, has been an IRBWMD supporter since day one. Other rescues that IRBWMD has donated to include Atlanta Beagle Rescue, the Mid Atlantic German Shepherd Rescue, Rescued Hearts Northwest, the Dakin Humane Society, Friends of the Forlorn, No Stray Left Behind, Yorkie 911 Rescue, and many, many more! 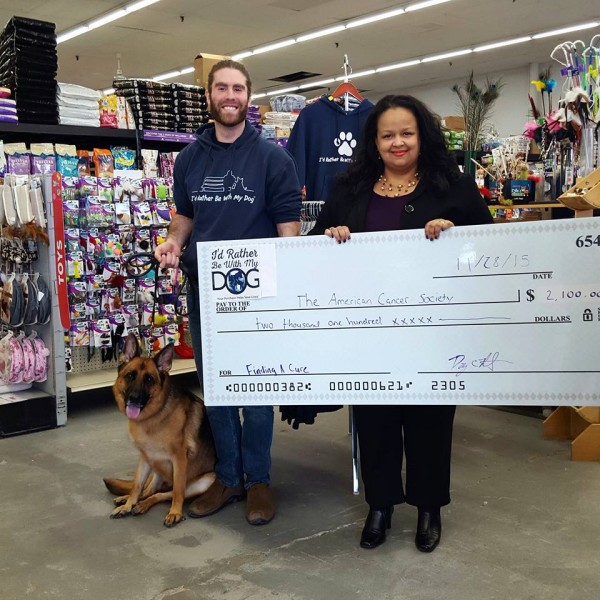 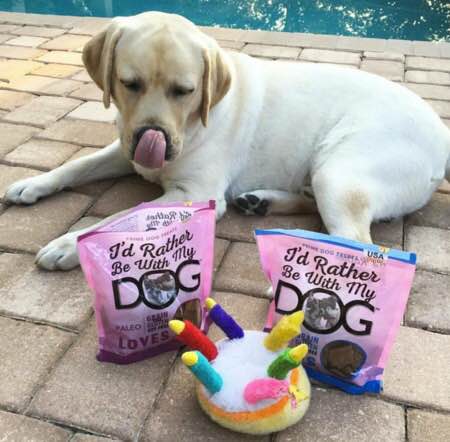 At its core, the the response to IRBWMD has been tremendous.  They have over 175,000 dedicated, loyal and passionate followers on Instagram. Their treats are in almost 1,000 independent pet stores across the country and growing. They also post pictures of their customers wearing their clothes with their dogs, which sets them apart from a typical clothing company. Their reach is global, as they have customers in Russia, China, Japan, South Africa, Vietnam, Israel, Malta, Estonia and more. IRBWMD is not just a “cutesy” life style brand.  It is a fashionable, heartfelt statement to the rest of the world about how obsessed and passionate you are with your dog! 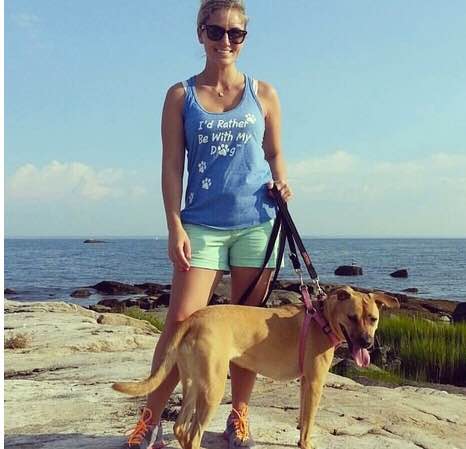 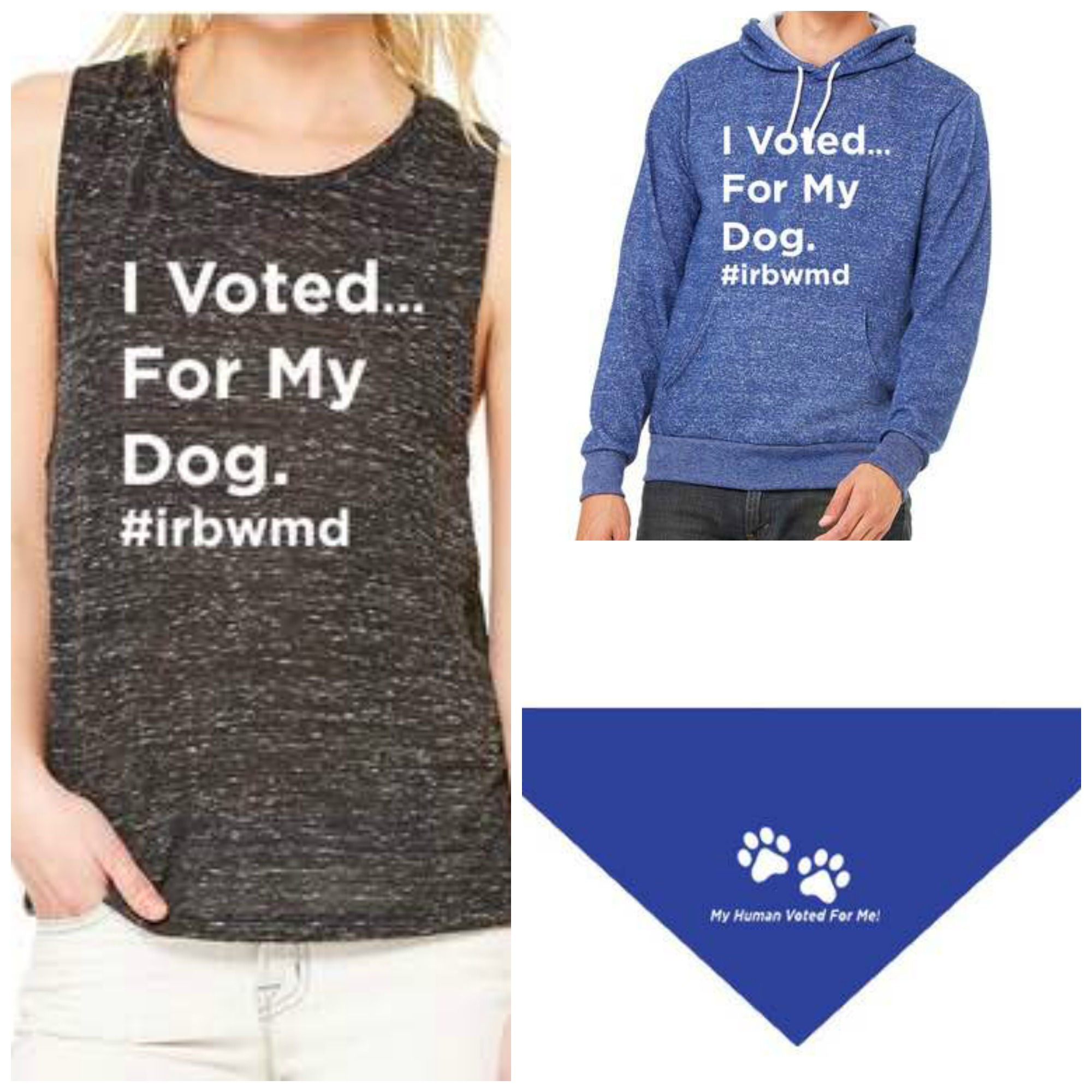 If you’d like to get involved with IRBWMD, there are numerous ways! If you own a pet store, clothing boutique, gift shop, they wholesale their items to be sold in stores. They also have an ambassador program for those who want to get involved on a local level in their towns. IRBWMD also sponsors trainers and dog walkers. And of course, just buying off the website is a way to get involved, because you spread the word and help join the I’d Rather Be With My Dog movement!

Shop their website and help give back to rescues and canine cancer research IdRatherBeWithMyDog.net 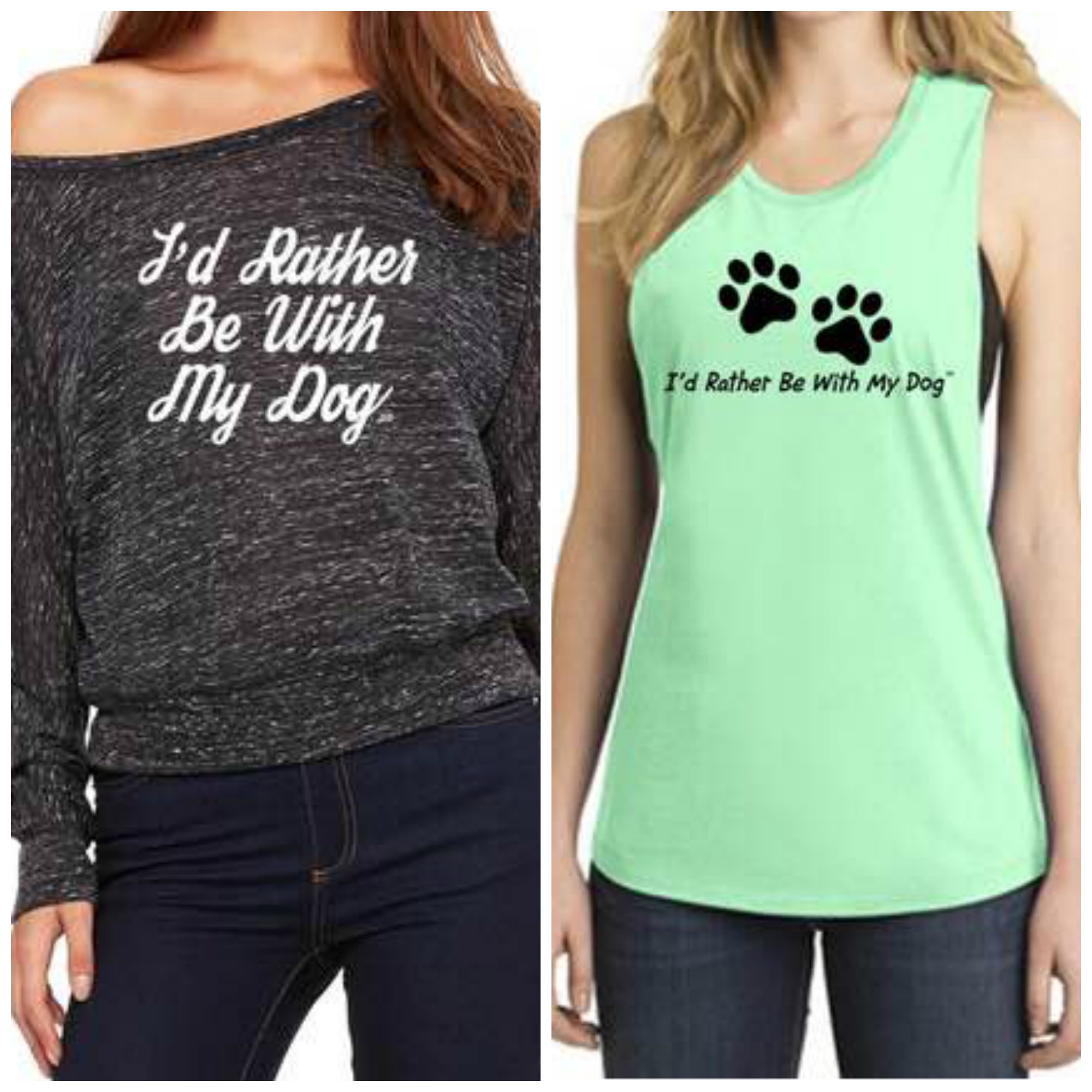 @dr.watsontheschnauzer looking so dapper in his I’d Rather Be With My HUMAN bandana ???????????????? use the CANCERSUCKS coupon code to get 10% off and help us find a cure for canine cancer! #schnauzer #schnauzersofinstagram #idratherbewithmydog #irbwmd #kickcaninecancersass

They’re matching ???????????????? order any hat or shirt and get a matching I’d Rather Be With My HUMAN doggy bandana!! #idratherbewithmydog #irbwmd

Matching I’d Rather Be With My HUMAN doggy bandana! Get it with any shirt or hat!! Buy and get free US shipping/cheap international shipping to anywhere in the world! #yellowlab #yellowlabsofinstagram #ilovemylab #labradorsofinstagram #idratherbewithmydog

Happy Birthday ???????????????????? @titan_the_spoiled_pup – he got spoiled with an IRBWMD Bday Package!! If your dogs birthday is coming up, order our birthday bundle to give them the best present EVER!! #idratherbewithmydog #irbwmd

Summer is holding on ???????? check out our collection of tanks at the link in our profile! #idratherbewithmydog #irbwmd