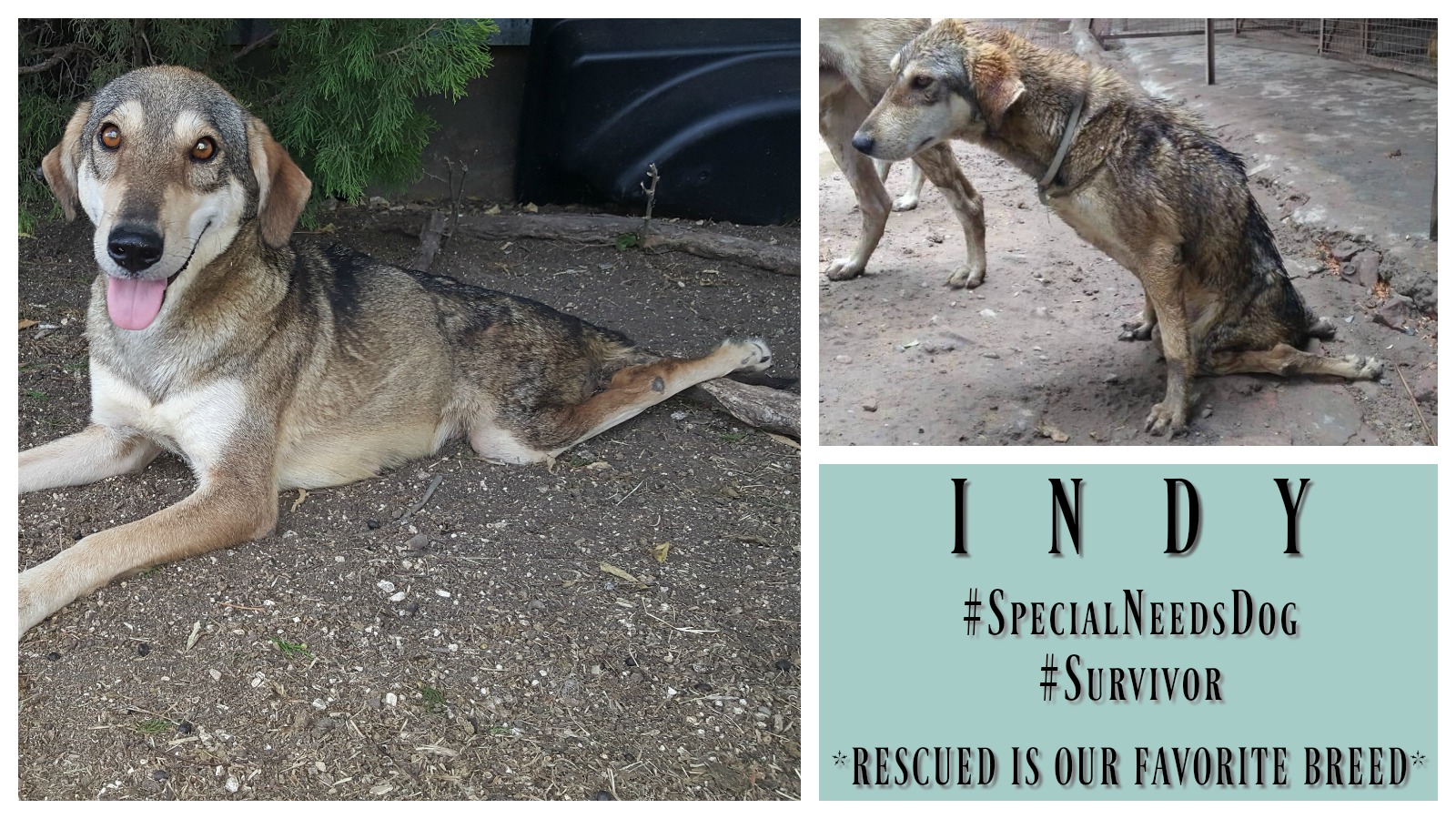 Indy is a two year old, special needs dog from India who survived a horrible past. In 2016, Indy was living in India, where she was hit by a truck and left to die and fend for herself. Thankfully, a good samaritan, who also happened to be a truck driver, saw Indy on the side of the road and knew he had to help. He took her into his home and cared for her until sadly, he died in an accident in 2017. 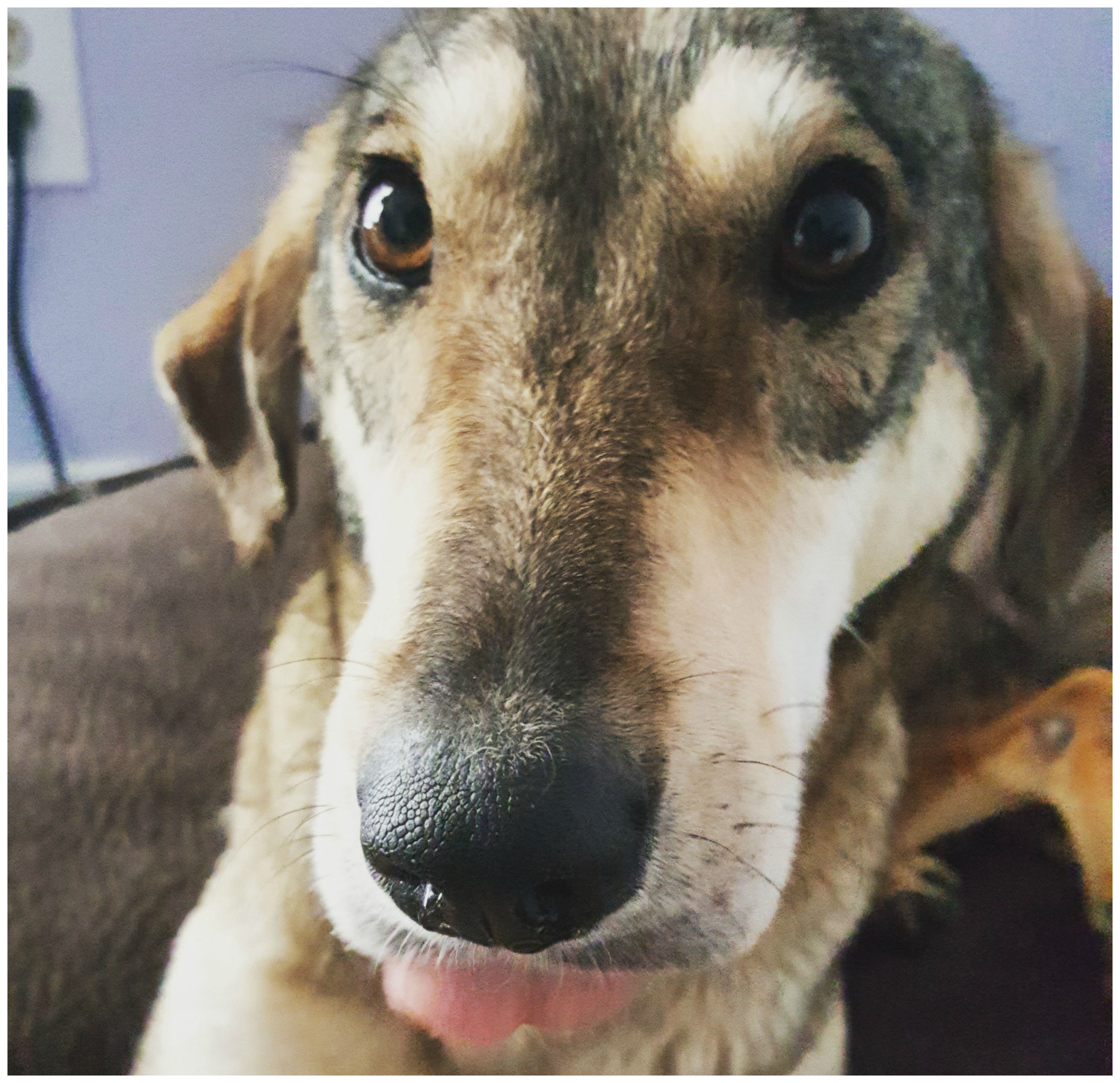 After he passed, Indy found herself back on the streets, alone again. She dragged her legs to get around, and tried her best to find food until she was picked up and taken to a shelter. This particular shelter kept all of the dogs in one area, so she found herself surrounded by twenty other forgotten dogs. Being disabled, this was especially hard on her. Indy lived on the streets for so long that she was severely emaciated, covered in ticks, and had wounds all over her body from dragging herself around. Her wounds got so bad that they had maggots in them. 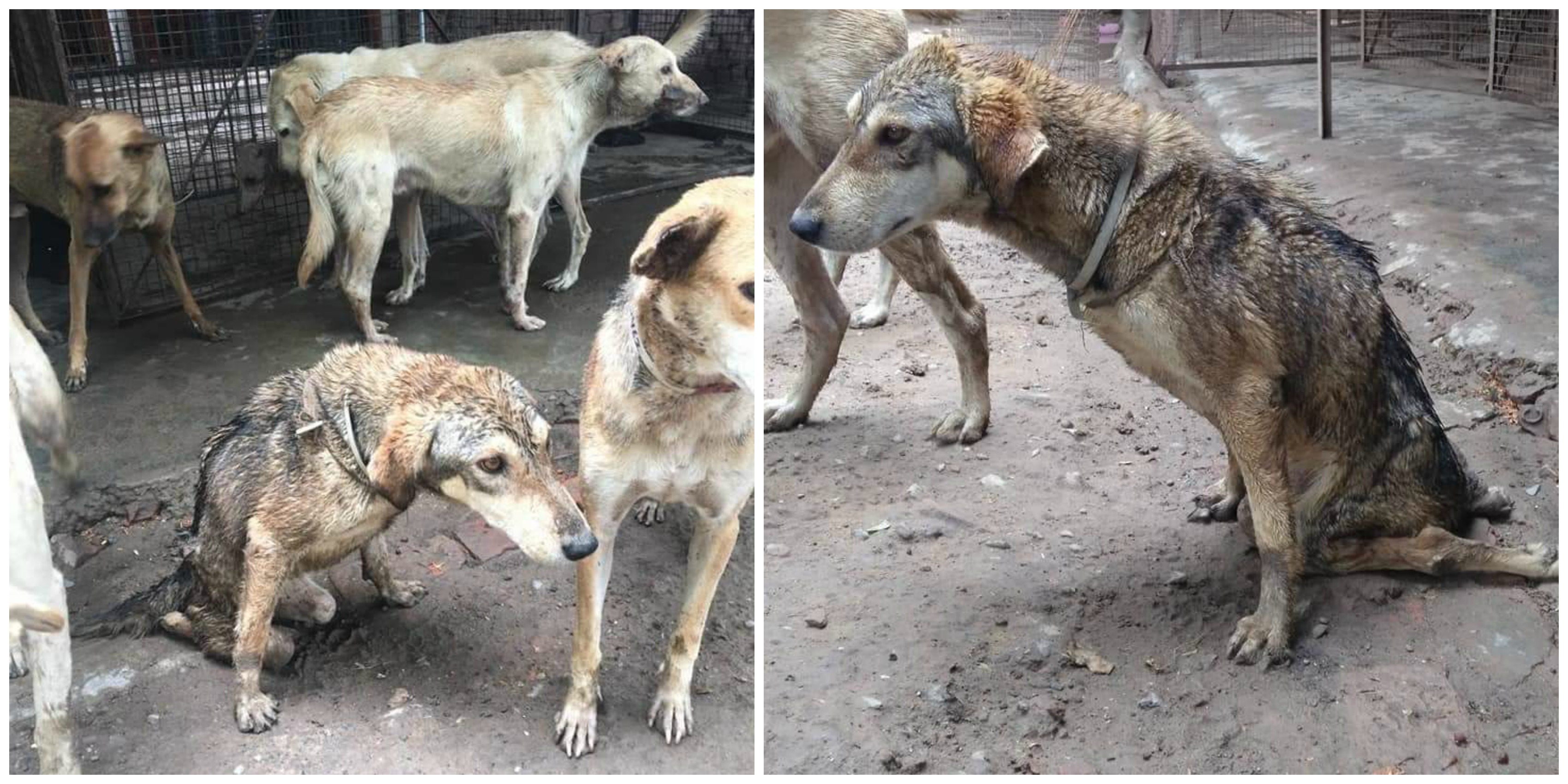 Indy’s forever mom happened to see her on Facebook after a friend shared her story. A rescue group in India, Peedu’s People, wanted to save Indy and find her a home, but before they could pull her from the shelter, they needed a committed adopter or foster to take her in. When Indy’s mom saw her picture, she KNEW she had to save her. Indy’s mom and dad already had many rescued animals at home, but they had to help her and fortunately, had the ability to do so. 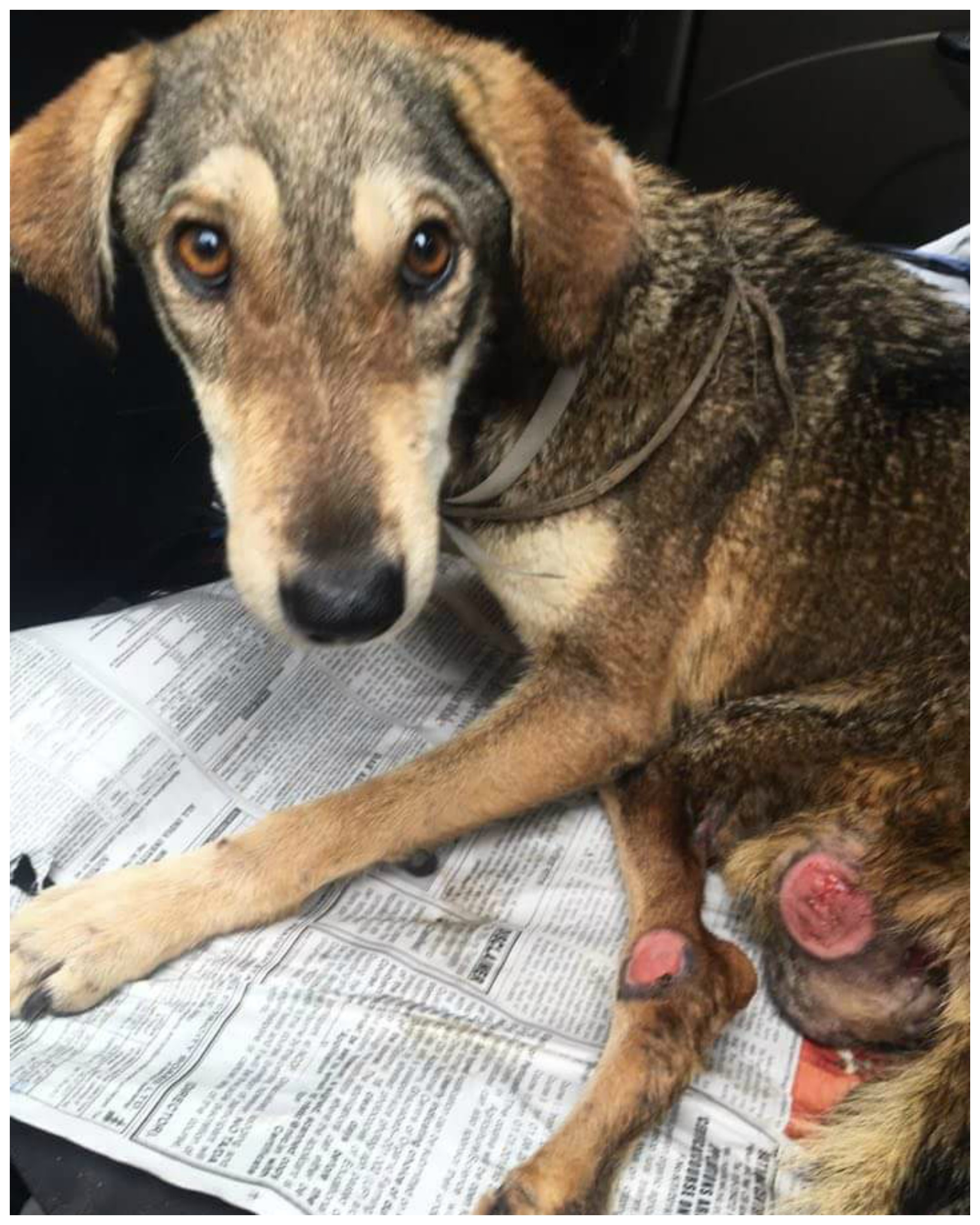 Indy’s forever parents contacted Peedu’s People and let them know they would adopt her. The rescue then pulled her from the shelter and took her to the vet. X-rays showed that she would never be able to walk again and they found out that she had no feeling in her back end. Her spine fused back together, side by side. Indy’s blood work also showed that her blood levels were poor, due to living on the streets and lack of proper nutrition. On top of all that, Indy can’t control her bodily functions so she has to wear diapers for the rest of her life and has to be expressed multiple times a day.

After caring for her, the rescue then raised funds to fly Indy from India to her new home in Texas. When Indy was stable enough, she made to trip. She was able to depart India on July 9th, 2017 and met her forever family in Texas on July 11th, 2017. She and her family live on a spacious farm where she is being raised with other rescues, including other special needs dogs. It was a huge adjustment for Indy – she went from living on the streets to playing in grass and spending time with different types of animals. Even the new sights and smells took some getting used to. She was very timid at first but was still so loving and sweet. 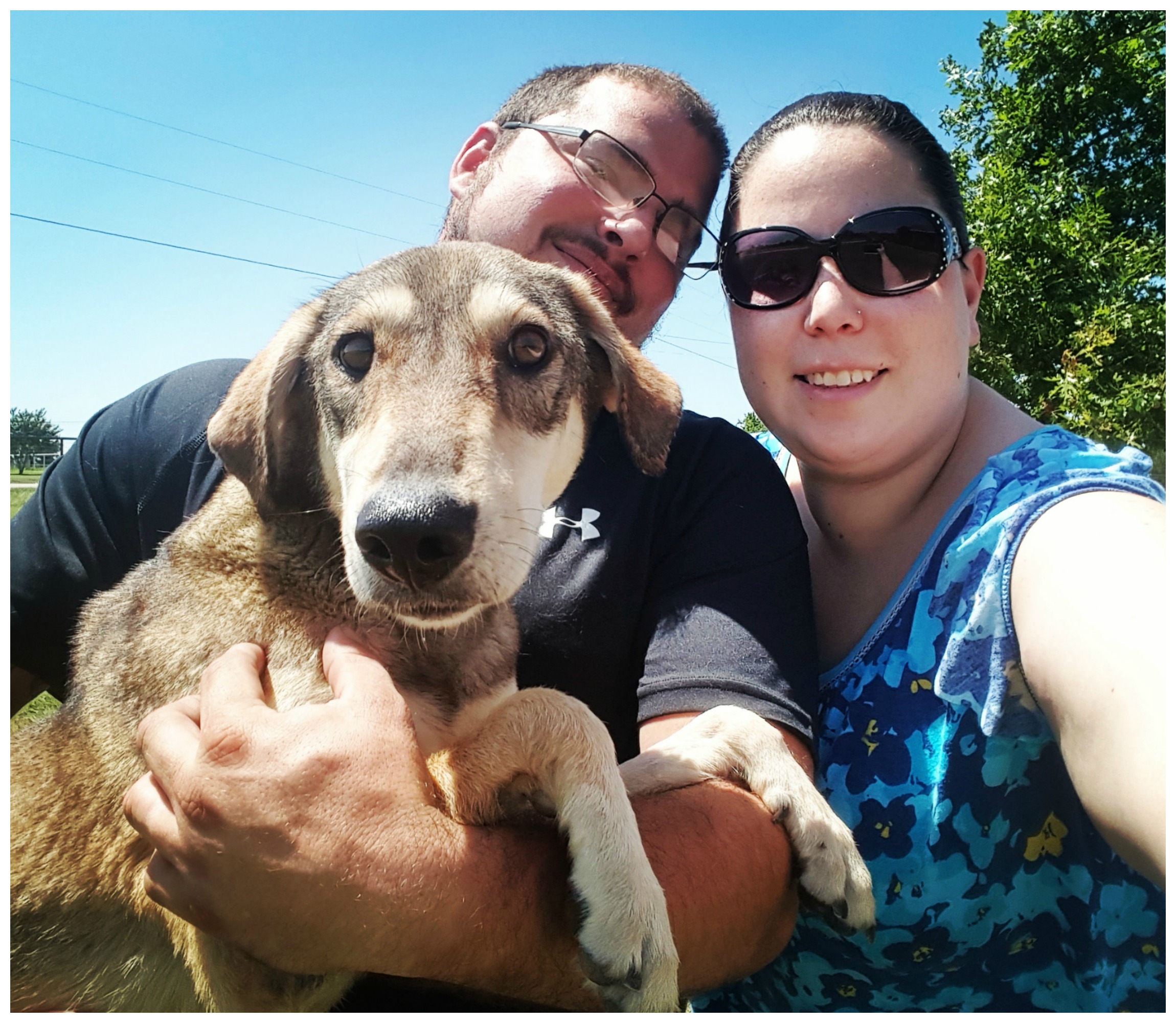 Indy has been in her forever home for a little over a month, and is accomplishing new things every week. She has gained weight, her wounds are almost fully healed, and she’s receiving proper care for her blood levels. She also has a wheelchair! Indy is no longer timid and loves to explore the farm with her new set of wheels. She loves her daily naps with the goats and chickens. 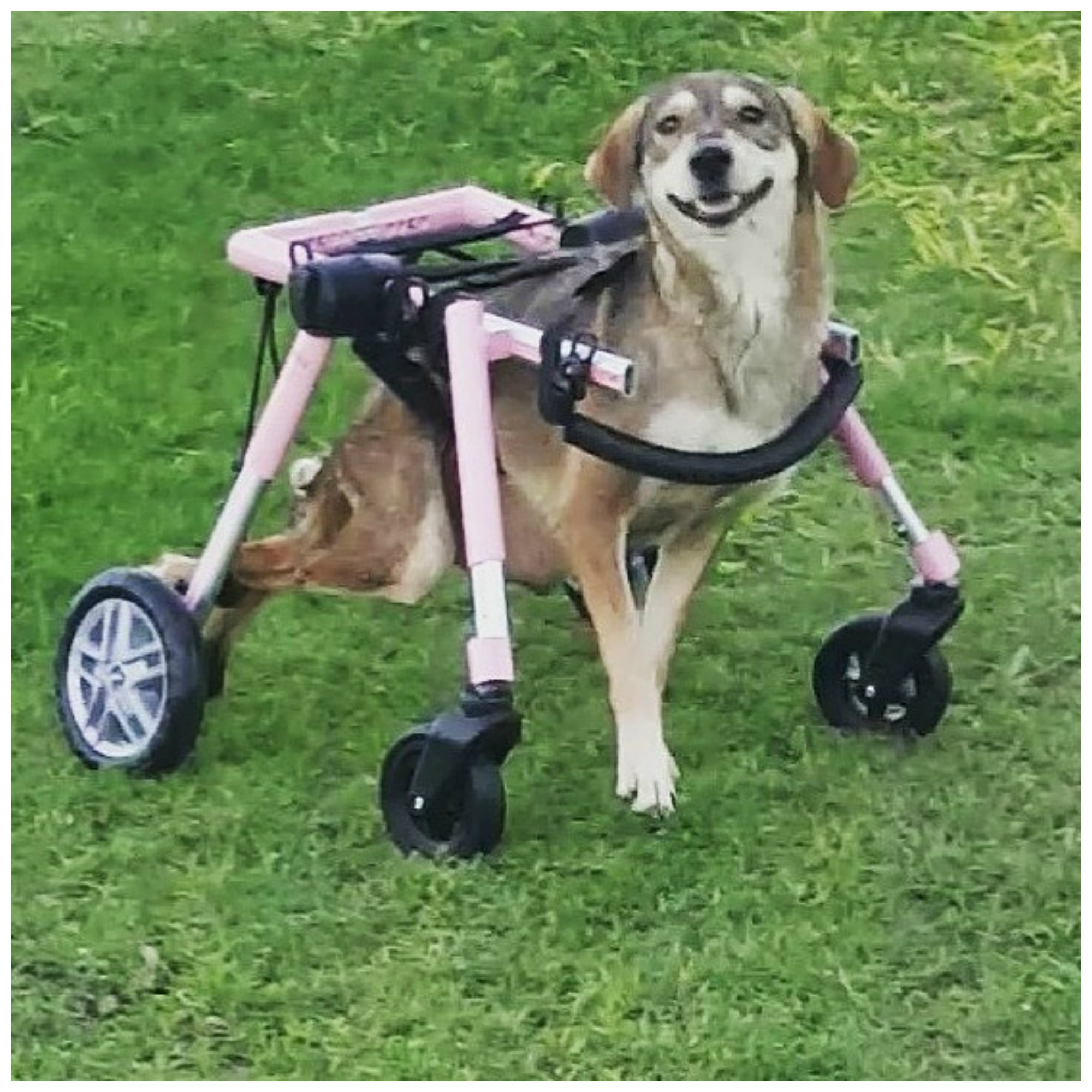 Indy hasn’t mastered the wheelchair yet, but she is improving everyday. She has a long road ahead of her – mentally and physically she has a lot to overcome. She still isn’t sure how to be a “normal” dog, but she has conquered so much and makes her parents proud every single day. Despite all she’s been through, her spirit was never broken and her faith in humanity was never changed. She loves everyone she meets and truly has a sweet, happy spirit. 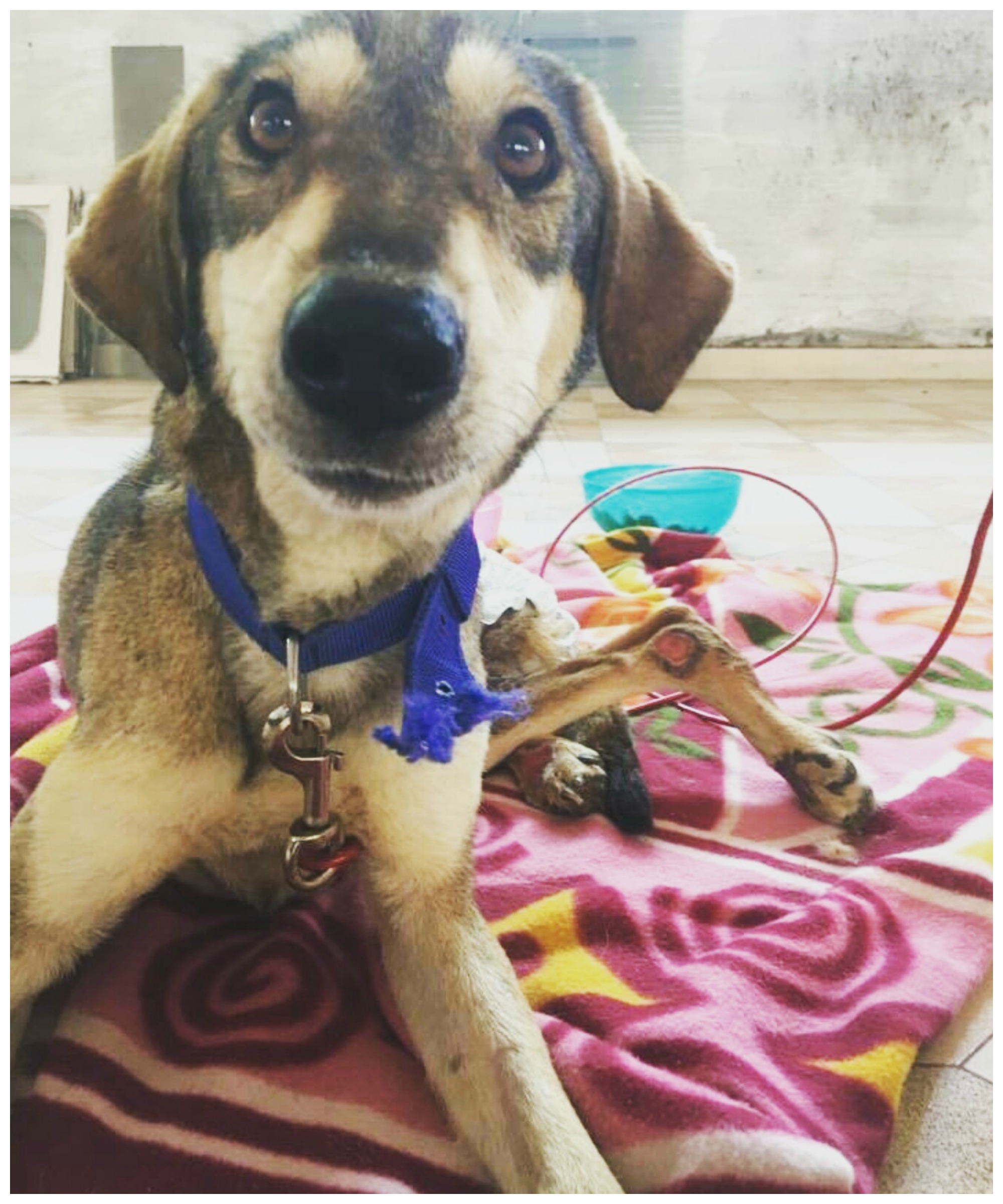 Indy’s parents are so thankful that they were able to give her a forever home and share this journey with her. She has touched and changed so many lives in such a short amount of time, and she inspires others to give special needs animals a chance at a loving home. Her mission is to share her story and be a fierce activist for special needs pets.

A post shared by Indy the handicapped cutie (@indy.thehandicapped.cutie) on Aug 8, 2017 at 3:00am PDT

Indy loves her bed!! Poor thing has several wounds as you can see on her back side area & between her legs most of these are caused from her dragging her back side but we were told some are from the diapers😢😢😢 the wounds are being doctored every day, I found a trick that seems to work so far had some left over puppy pads we let her lay on the pads in the house instead of wearing a diaper all the time.. This allows the wounds to heal faster & she’s able to use the bathroom without going on the actual floor. So we have made some changes to her wish list now that she’s here & know what works, we’ve included puppy pads & her favorite treats(at her request 😂😂lol) Indys Amazon wish list is located on her page under the description if you would like to give her a welcome home gift.. thank you to those who have already made a donation & for all the love..we are truly blessed with a amazing IG family #adoptionrocks #adoptspecialneedspets #paralyzedpooch #paralyzeddog #legsareoverrated #wheelchairdog #familylove #blessed #mansbestfriend #pet_of_instagram #lovinglife #adoptdontshop #livinglife #furbaby #muttsofig #muttpuppy #friendship #rescuedismyfavoritebreed #rescuedog #dogsofinstagram #dogsofig #secondchances #makingachange #smilingdog #muttsofinstagram #wearepetsnotthreats #makingadifference #cutedogs #puppiesofinstagram #smiling

Today is the day!!!!! Indy gets on her flight to come home to Texas.. In 24hrs indy will finally get to be in her forever home.. Here is her pictured with one of her rescuers & the rest of her cute self make sure you flip through the photos she’s just so cute🐶🐶🇺🇸🇺🇸🇨🇱🇨🇱 if you would like to donate our BIGGEST need is diapers & dog food..Indys Amazon wish list is located on her page under the description if you would like to give her a welcome home gift.. thank you to those who have already made a donation & for all the love..we are truly blessed with a amazing IG family #adoptionrocks #adoptspecialneedspets #paralyzedpooch #paralyzeddog #legsareoverrated #wheelchairdog #familylove #blessed #mansbestfriend #pet_of_instagram #lovinglife #adoptdontshop #livinglife #furbaby #muttsofig #muttpuppy #friendship #rescuedismyfavoritebreed #rescuedog #dogsofinstagram #dogsofig #secondchances #makingachange #smilingdog #muttsofinstagram #wearepetsnotthreats #makingadifference #cutedogs #puppiesofinstagram #pooch

A post shared by Indy the handicapped cutie (@indy.thehandicapped.cutie) on Jul 9, 2017 at 1:27pm PDT

For the 1St time our girl is actually smiling, how pawsome is this!! She’s feeling better day by day I think all of the prayers & positive vibes y’all have been sending are working!! We have some great news to share not only did Indys plane ticket get fully funded thanks to everyone who donated to her gofundme but she might get home a day early!!! We are so excited about all of this news.. #adoptionrocks #adoptspecialneedspets #paralyzedpooch #paralyzeddog #legsareoverrated #wheelchairdog #familylove #blessed #mansbestfriend #pet_of_instagram #lovinglife #adoptdontshop #livinglife #furbaby #muttsofig #muttpuppy #friendship #rescuedismyfavoritebreed #rescuedog #dogsofinstagram #dogsofig #secondchances #makingachange #smilingdog #muttsofinstagram #wearepetsnotthreats #makingadifference #cutedogs #puppiesofinstagram #smiling

A post shared by Indy the handicapped cutie (@indy.thehandicapped.cutie) on Jul 1, 2017 at 2:21pm PDT