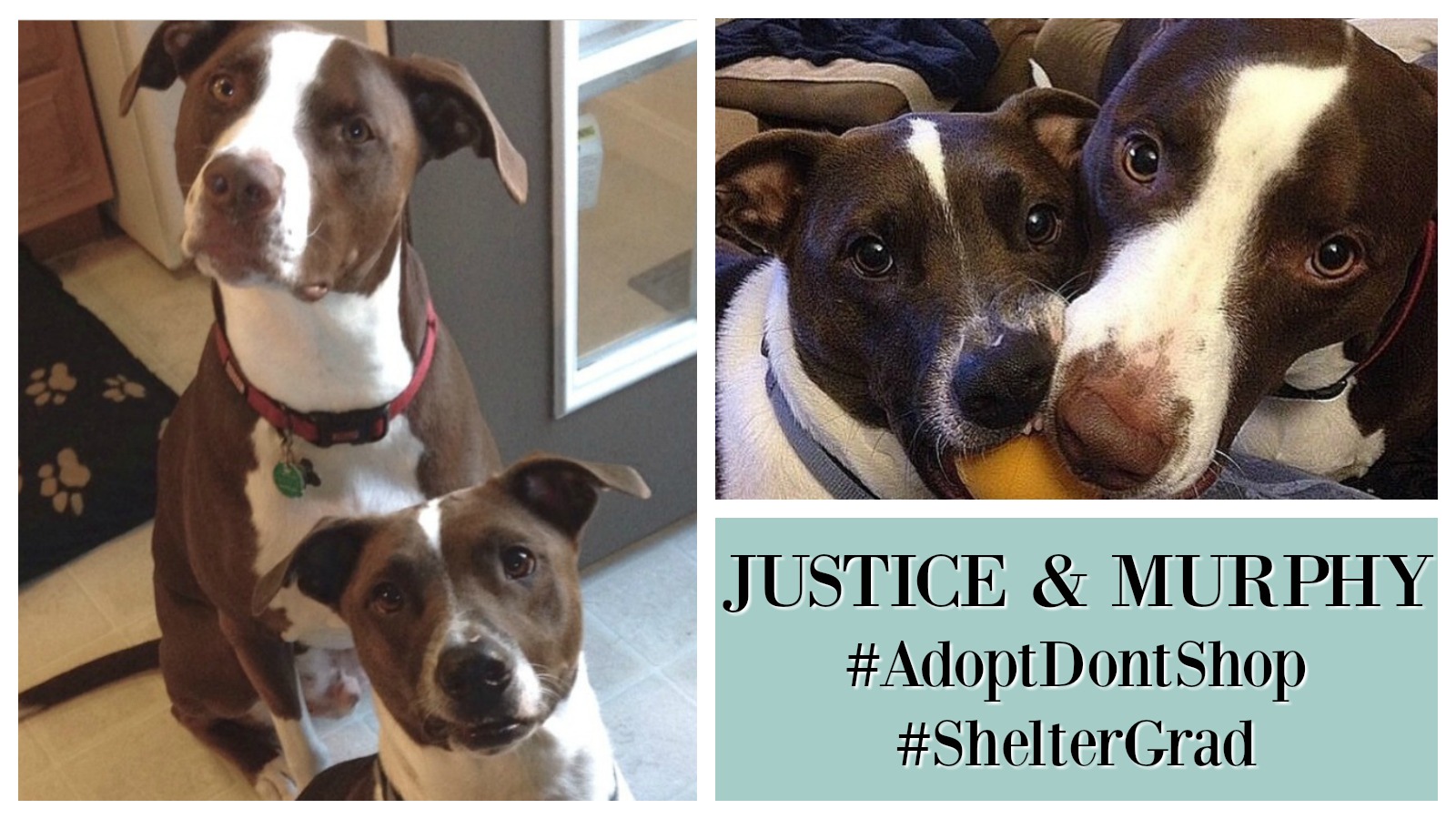 Kelly and her wife had Justice brought up from North Carolina when he was just ten weeks old. His previous human was a nice man, but his human’s brother wasn’t. The man and his brother got into an argument and the brother set Justice’s fur mom and fur siblings on fire. Justice’s mom tried to save her babies, but sadly, lost her life, along with two of her babies. 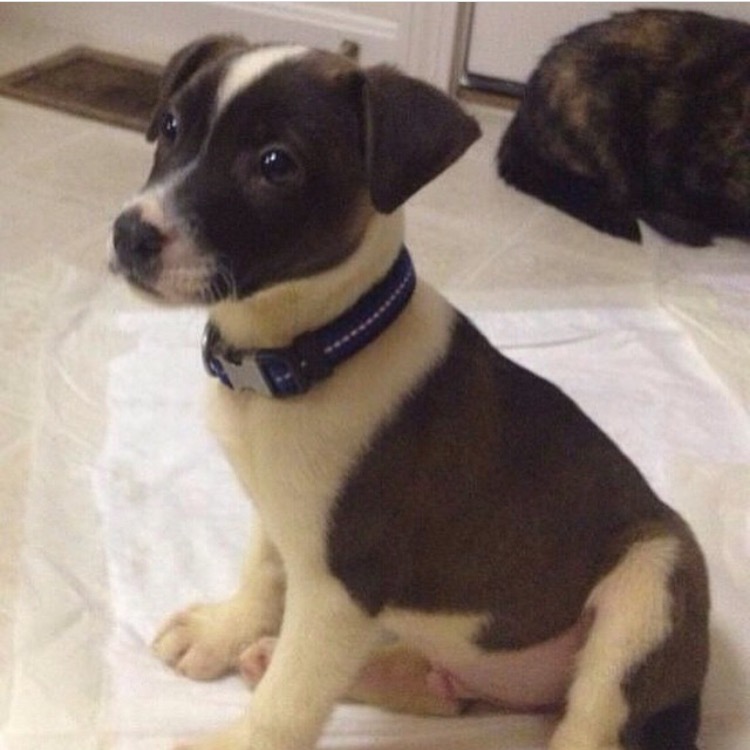 Justice’s paws were a little singed and he had worms, but aside from that, he was in good shape, physically. Justice’s new humoms got him to the vet and he got the medical attention he needed. He was such a happy boy and his tail never stopped wagging! When he was just eight months old, he started to limp after playtime. Justice’s moms thought he had pulled a muscle, but when it didn’t get better, they took him to the vet. He was diagnosed with double hip dysplasia; his joints were barely in their sockets and he was in a lot of pain. His back end became extremely atrophied, his front end became extremely muscular and his body type resembled that of a bulldog. He became very depressed.  After all, he was just a puppy and all he wanted to do was play! 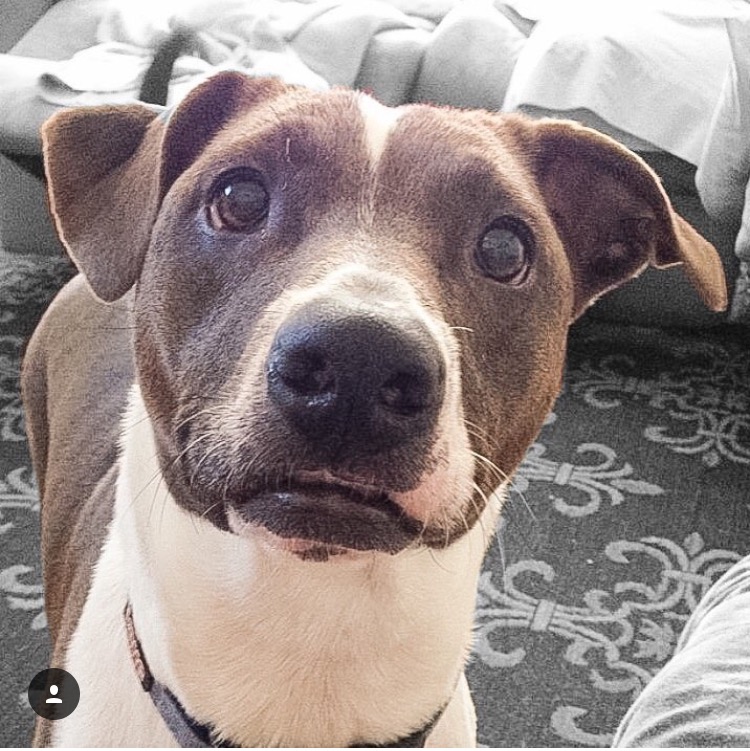 Justice’s moms decided on Femoral Head Osteotomy surgery. They cut the ball joints off the top of his legs so they aren’t attached by bone anymore. He had no problems when they operated on his first side but his other side took longer to heal. Eventually, he fully recovered and if you met him today, you’d never guess he had any hip problems! He runs, jumps and  plays like any other happy, heathy pup! 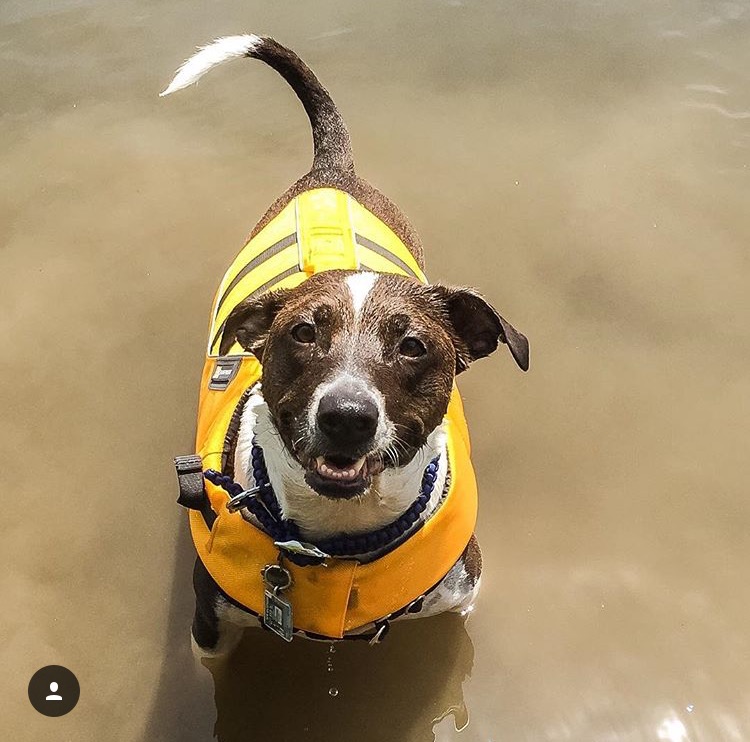 Justice was initially thought to be a bull terrier, but his DNA test results said he was mostly Jack Russell Terrier, part Bull Terrier, and a little bit of American Foxhound.  He’s definitely stubborn & thinks he’s the boss!  He is Kelly’s hero and she’s so glad he rescued HER! 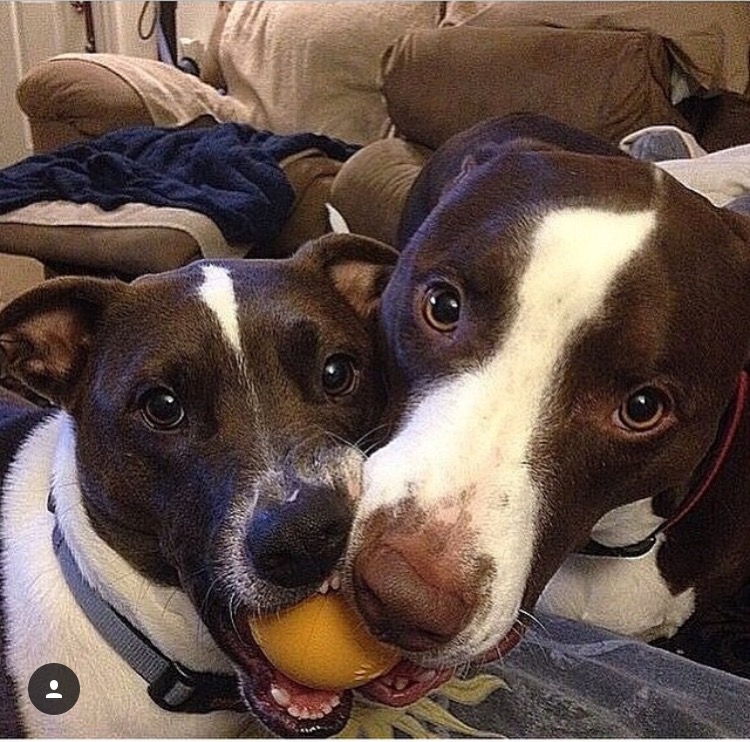 Kelly was looking at the Manchester Animal Shelter website, as she wanted a friend for Justice.  She came across Murphy. He had the most beautiful honey eyes and she fell in love with him instantly. At just ten months old, he already had three different names and homes. The shelter said that if he came back again, they would probably have to put him down. Kelly assured them that he wouldn’t be back! 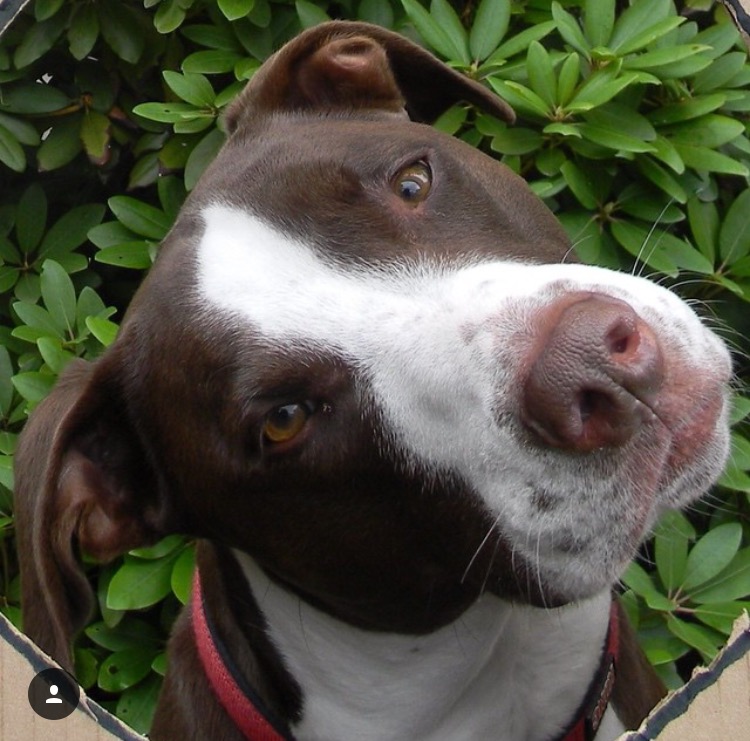 Murphy didn’t have the physical issues that Justice did, but he had emotional issues. He can’t be around children under 13. The shelter told his moms that he had previously bit a child, but knowing him now, he gives a warning, so perhaps the child was scratched.  They don’t know for sure. 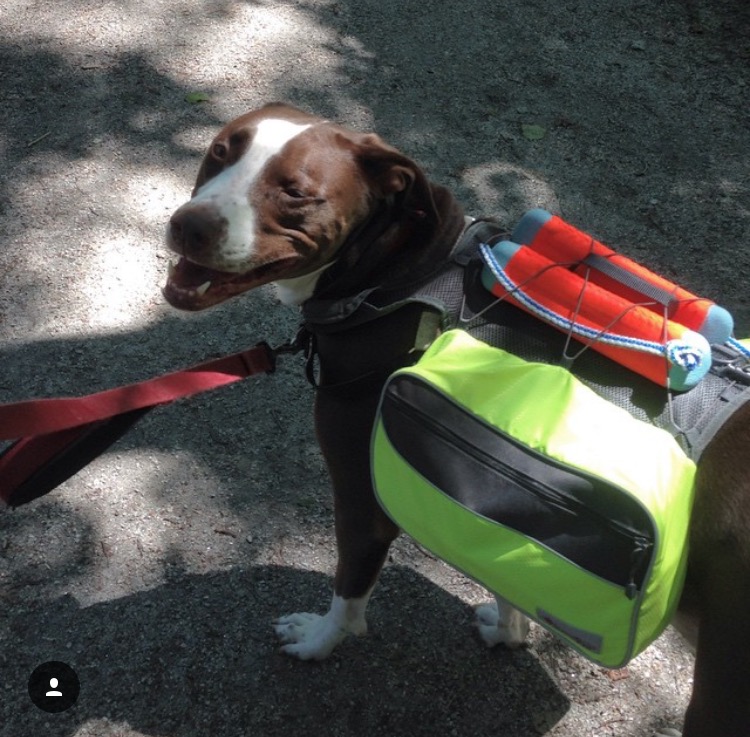 Murphy had extreme separation anxiety, to the point where if his moms were leaving for work, he would lay in front of the door and growl at them. He also peed in the house for quite a while.  Despite all this, his moms REFUSED to give up on him. He still can’t be around kids, but they are so proud of how far he has come! He doesn’t pee in the house anymore and even though he doesn’t like when his moms leave, he deals with it much better. His moms got him a crate and he will go lay in it when they leave. It has become his safe place.  Murphy is a big, beautiful baby! 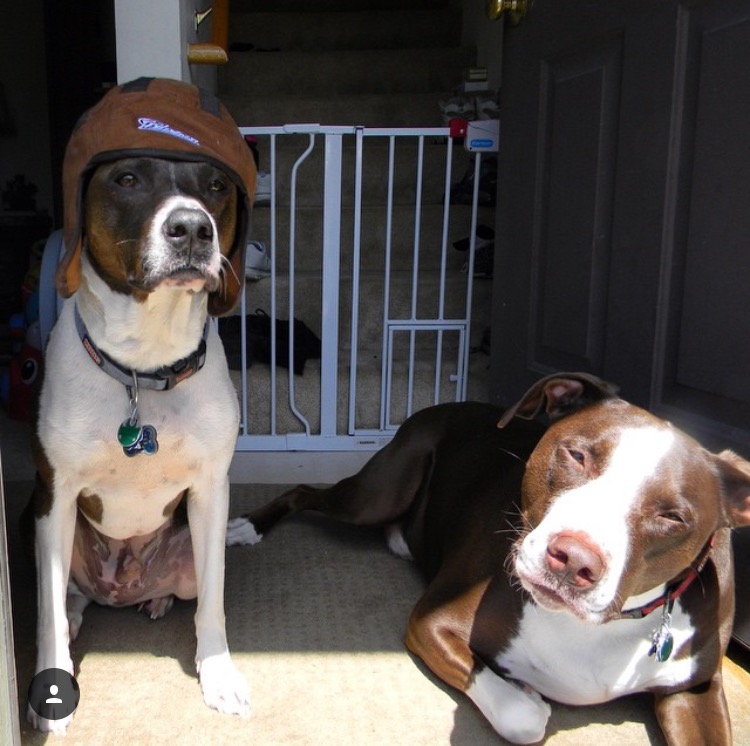 Justice and Murphy are beyond loved, and their pawrents are blessed to have them in their lives! 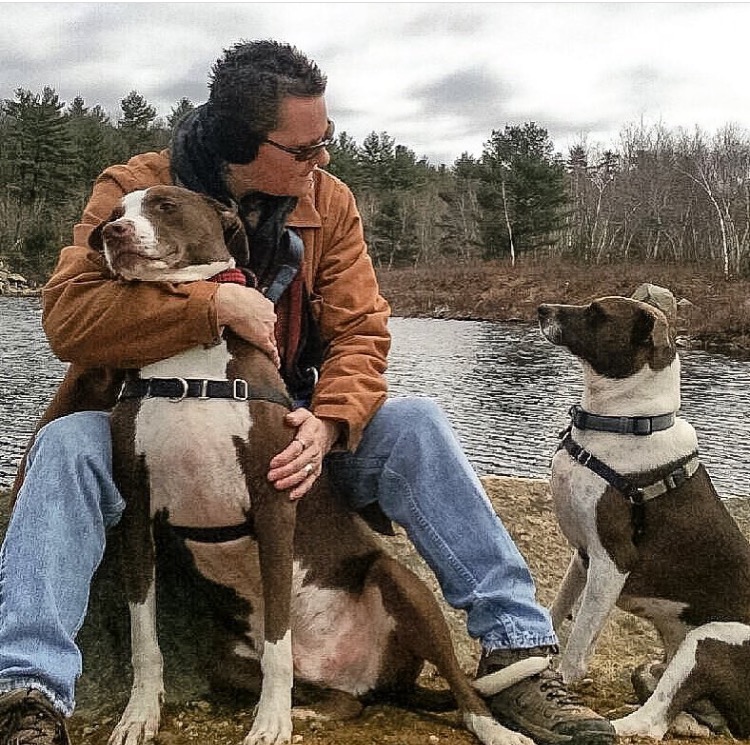 YAY OUR @wagaware CHARMS CAME TODAY! TOMORROW IS THE LAST DAY!! THEY ARE ONLY 100 CHARMS AWAY FROM A $7KDONATION!! ????EXCITING NEWS! We’ve JOINED PAWS with @WagAware @PitbullInstagram @TheVelvetBurritos & pals to help save shelter pets’ lives! WagAware is extending their #WagAware4CAA Shelter Fundraiser! Through Aug 31, WagAware will donate a WHOPPING 60% of ALL SALES to @CAAPets Shelter–a wonderful shelter serving one of the poorest areas in the country! They have already raised over $5,200 for @CAAPets but we want to help them hit their goal of $7K! We are only 200 charms away! You can get your charms at WagAware.com PLUS #Buy3Get1Free and #itGLOWS! They are also PAWfect for keychains and make great gifts! Join me in #PawingItForward for dogs in need with #WagAware???????? and please tell your FURRIENDS ???????? #furryfriends #dogs #dogsofinstagram #dogstagram #dogsofig #dogsrule #animals #angelswithpaws #adoptdontshop #savelives