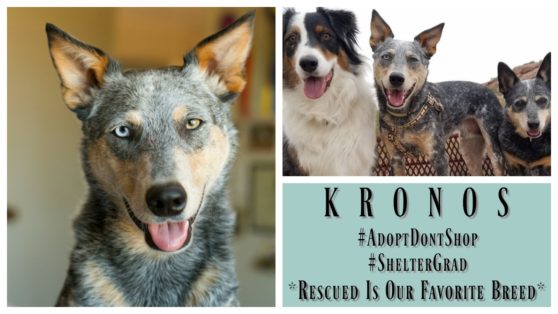 “A half deaf, reserved, houndy-eared pup with two different colored eyes is definitely not the dog I wanted or had in mind. But he is exactly the one I needed. After my second parent died in early 2012, holidays and life in general were different and sad. Caring for my Heeler and having her by my side made the pain a little easier to bear. I began looking for a second companion for my nine year old Heeler to help raise and for her to have a friend, too. 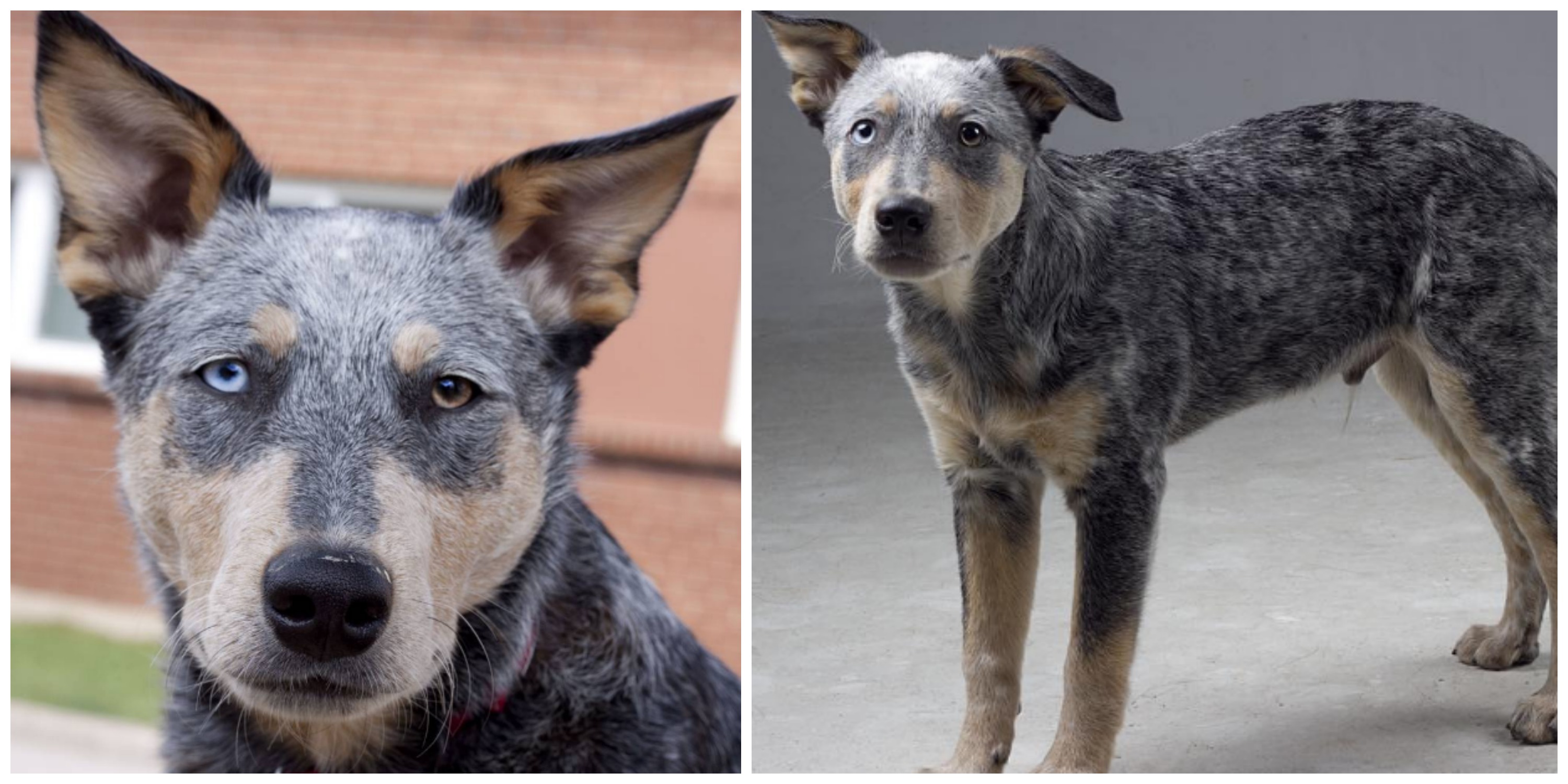 Kronos is an Australian Cattle Dog Mix, who is now 3 years old. He was born as a stray. The family was found on the road and turned into the Pinal Animal Shelter. Mom and pups were pulled by Arizona Cattle Dog Rescue into a foster home and given Native American themed names. In December 2012, once the pups were fixed and old enough, I took a blue, male pup to foster and was asked to transport a second pup named Ciqlal, which means ‘Little One’ in Dakota, to another foster home. I had no intention of adopting the second pup.

I still remember picking Ciqlal up and thinking there was no way I would adopt him. I was interested in the dark blue pup with brown eyes and a black mask and wanted to see if he would be a good fit with my other dogs and me. However, the frosty face pup with different colored eyes had other ideas; he decided that I was meant to be his human from the start and set out to convince me of the same. Ciqlal stayed right by my side no matter where we went. He cried for me if I left, but never for anyone else. He scaled the sides of the exercise pen to come racing to wherever I was. He always wriggled between his brother, making sure he was the one touching me. When I got upset, he crawled in my lap and curled up, letting me stroke his fur. But I still wasn’t entirely convinced. When I was crying after a failed potential foster meet and greet for another dog, he put his paws on my chest and his face in mine as if to say “Everything will be alright, I’m here.” That was the turning point. 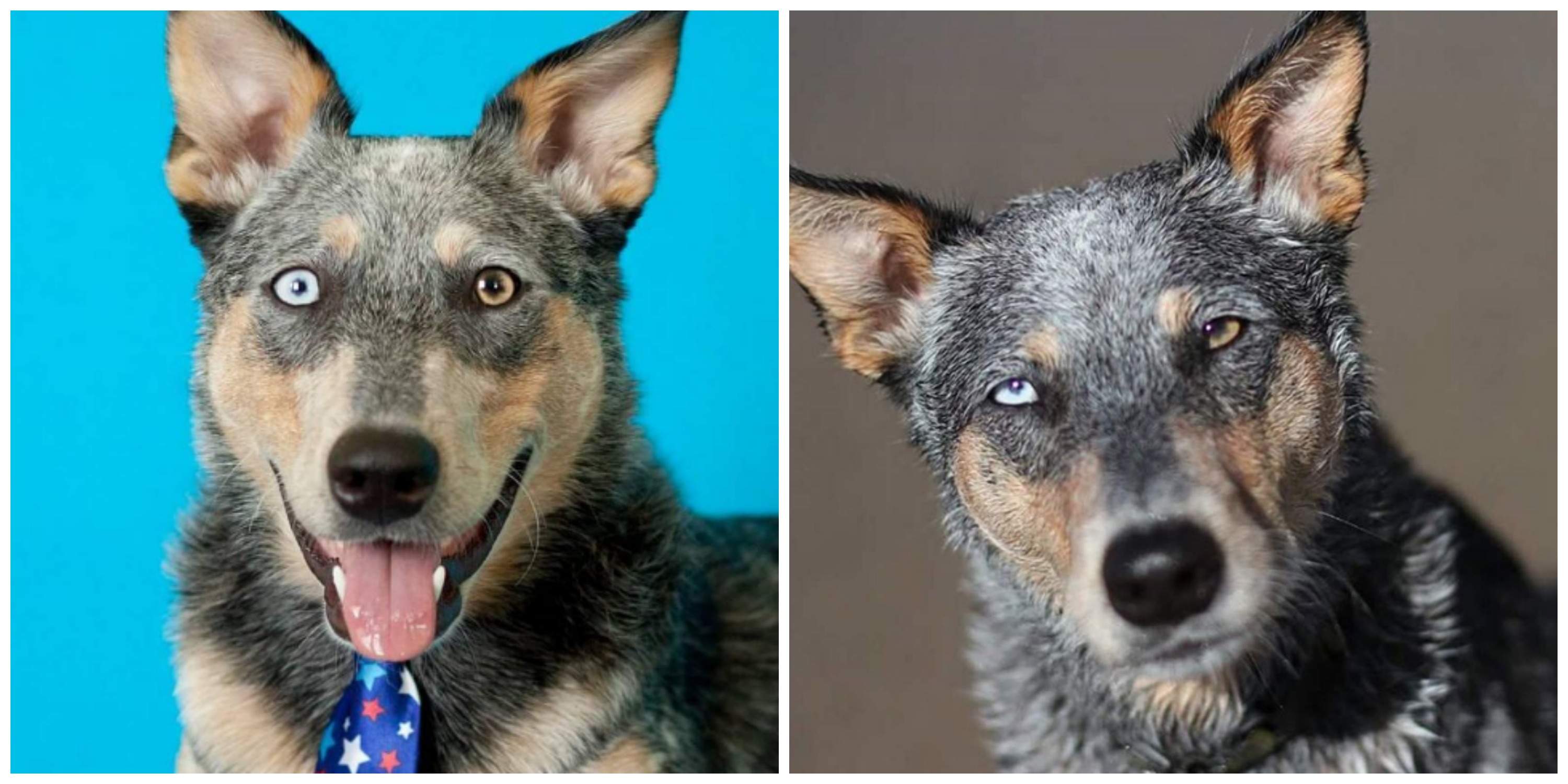 Kronos officially became part of the family in January 2012, and we have been inseparable ever since. I found out later that Kronos was half deaf. In June 2013, Kronos was BAER tested and the results indicated that he is unilaterally deaf — he cannot hear out of his right ear. There had been indications of a hearing impediment in Kronos when he was young; when we played hide and seek, he could never seem to fully locate the sound. If he saw me, he’d race right to me. Otherwise, I could be standing right behind him and he’d rush off in the other direction where the echo came from.

My brother named him Kronos for the “God of Time,” spelled with a “K” instead of “Ch.” Kronos is unique, full of charisma, a character, and a total goof! His favorite thing to do as a pup was steal my shoes and run around with them while making adorable little dinosaur noises. Now, he will grab his pillow toy and play while making otherworldly sounds. He can fit on my lap in a tight ball and he loves cuddle and snuggle time. His expressiveness, smile, and adoring eyes are so charming. His head-tilt is my #1 favorite which always immediately melts my heart. 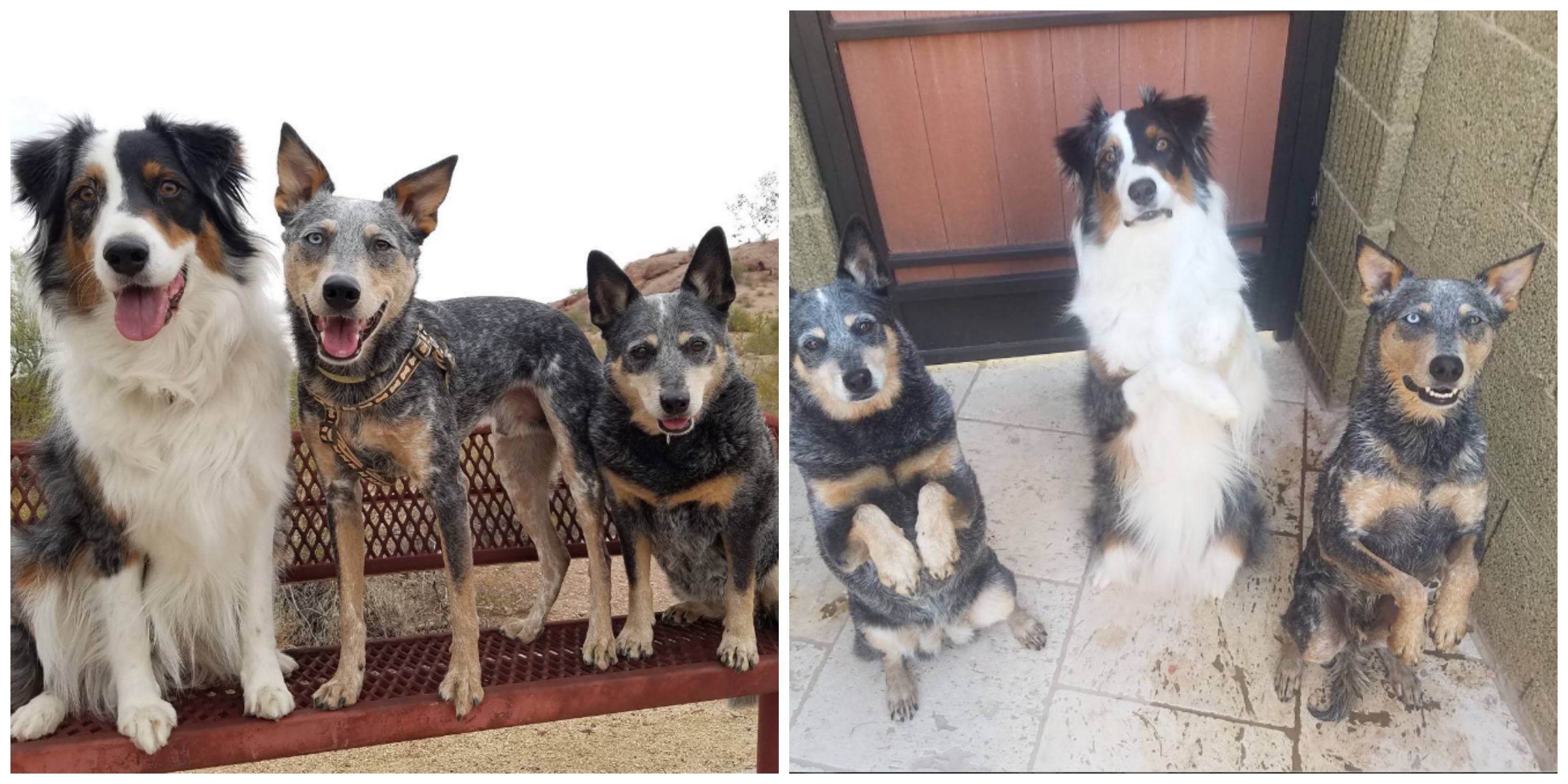 He loves learning new tricks, which can be seen on our website (www.tiffanysdiamonddogs.com) and YouTube channel. He has become quite the looker and is very photogenic. He can still be a little shy with new people, but he is getting better and more confident every day. Kronos’ photo has appeared in the opening credits of “The Dog Wedding” movie, he is on the cover of the the book “Lost Souls; Found! Vol IV,” and on the cover of the Fido Friendly Magazine’s Tongue Out Calendar. His photo is on RedBarn Premium Pet Products Press Kit marketing brochure, and his photo was in PetSmart’s most recent online local ad and the Training Specials section from his first photo shoot.


Watching Kronos run with pure, unfettered joy on hikes or dive head first into water lifts my soul. He has gone camping, kayaking, canoeing, and recently tried stand up paddle-boarding, which he loved. 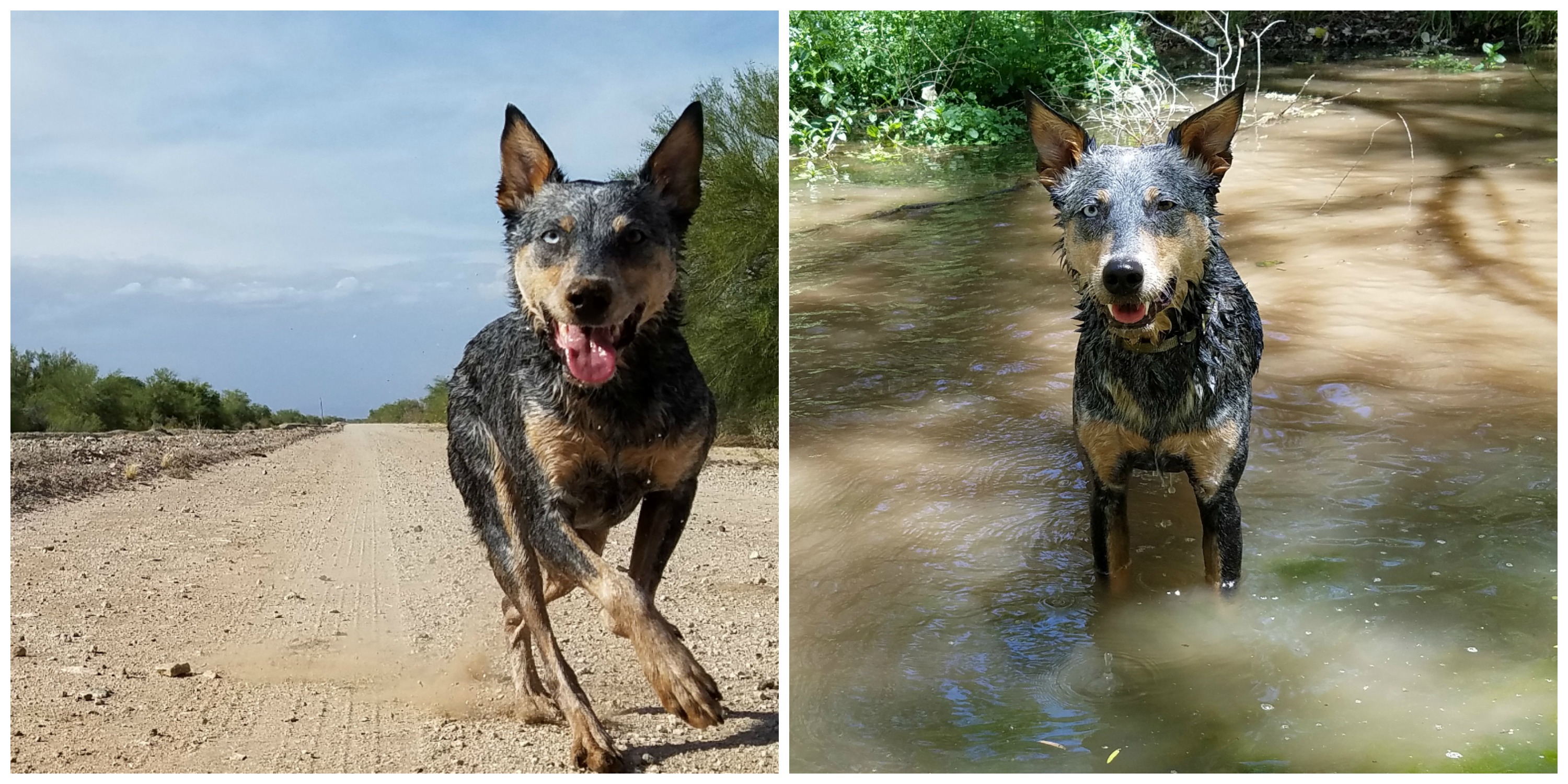 Kronos is my shadow and my companion. He looks up to his older sister and loves her very much. They play together often and I love watching them race around the yard playing chase. Much like the Native American character, Coyote the Trickster, Kronos is very wiley; he’s always up to mischief and helping reshape my thoughts and self. Time may not heal all wounds, but Kronos brings so much light to my life by making me laugh and smile with his silly antics, knowing soulful eyes, and bright smile. He is a lot of character stuffed into a small package. Fate has a funny way of making things work out, because I discovered later on that though I thought I had been given the ‘Little One’ “Ciqlal,” I was actually given “Pimne” which means Weasel in Navajo. The two pups were mixed up. This little one definitely weaseled his way into my heart. Being adopted from a rescue was just the beginning for both of us and all I can say is, I’m grateful Kronos picked me.”

My favorite picture from the Herding event this weekend ❤ It’s not an action shot, but I love it. Kronos is such a handsome and beautiful dog-it’s easy to see why people are enthralled with him when we’re out and about. Bella and Kronos had a ton of fun catching up with friends and herding with AZ Cattle Dog Rescue this weekend. This pic was taken by one of the other awesome rescue photogs. Photo credit: Kathleen Kingma

At the #ADoggoneChristmas premiere screening. The movie is a super cute, family friendly, dog adventure starring @justjessethejack.The DVD is available in Walmart and can be watched as VOD. The second movie coming out next spring is #ADoggoneHollywood ????????????❤

What a little monkey! Kronos is so incredibly expressive with his eyes, and he’s learned to communicate for something he wants. If he wants water, he’ll bring the bowl over or my water bottle to ask for some. He’s also super helpful-when I drop something on the floor he rushes to pick it up for me. This is his “can I play with this pillow?” face. ❤

This handsome pup is 4 years old!! ❤❤❤ We’ll be hosting a giveaway on our blog to celebrate our blogoversary and Kronos’s birthday starting next week. ????????

A little bit of puppy adorableness ????❤

We’re hanging out in Flagstaff dogsitting for a bit, and are so happy to be back in the pines and cooler weather ????