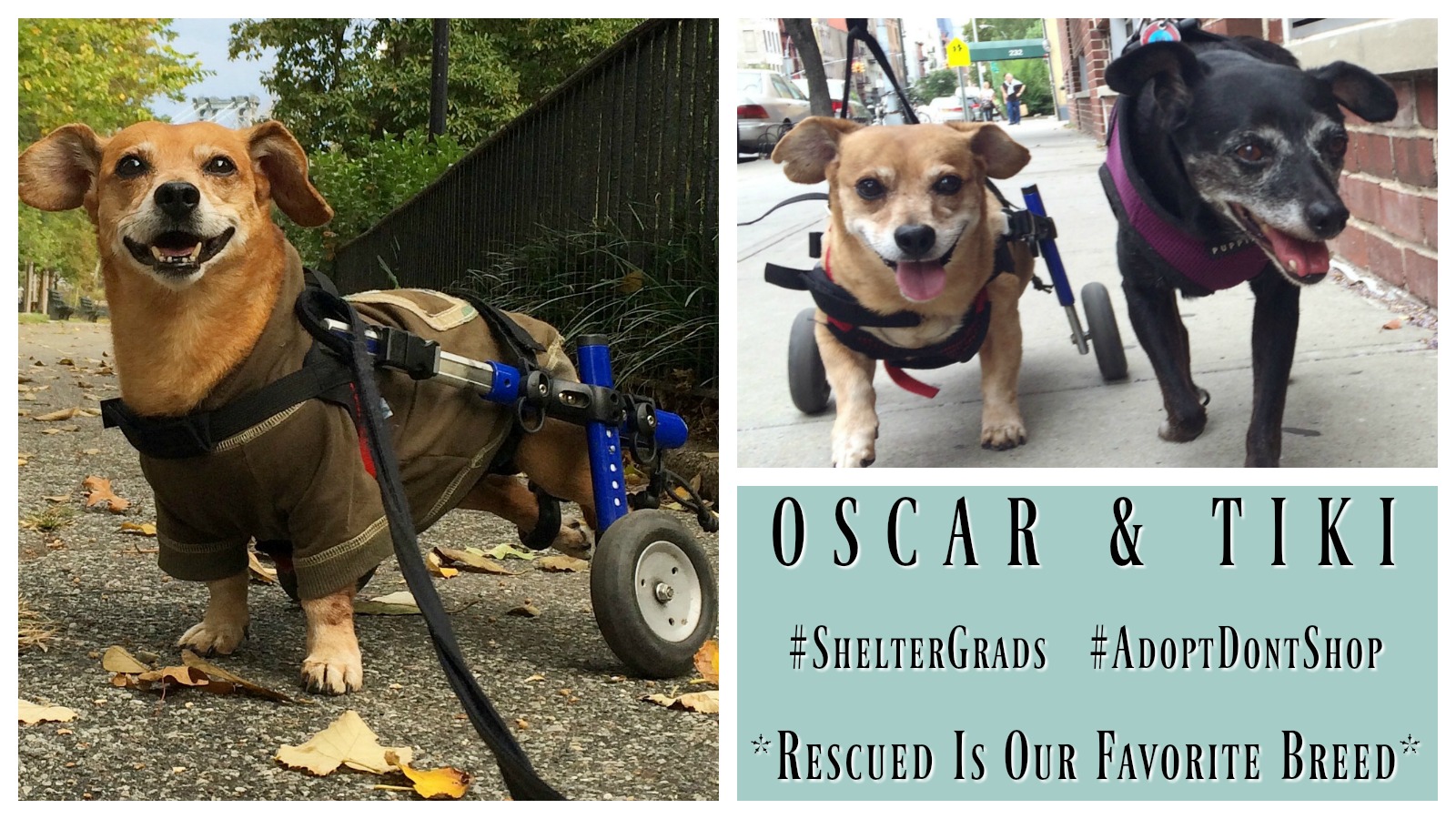 Oscar’s family adopted him in June of 2011. He had been found paralyzed and abandoned a few months earlier on Manhattan’s Lower East Side under the Williamsburg Bridge. NYCACC picked him up, but scheduled him to be euthanized. Marilyn and Julia of NY Peticare saved Oscar from death row, and he went to live at Julia’s upstate New York rescue shelter with her husband, Oscar’s parents’ veterinarian, Dr. C. W. Schaubhut of Downtown Veterinary Clinic. Rick and his girlfriend, Christian, met Oscar at random on a visit to Dr. Schaubhut’s office with one of their rescue cats, and immediately fell in love. A group of 7 or 8 dogs came running into the waiting room as the office was closing and Oscar was in the middle of the pack, no wheelchair or drag bag, just bouncing, smiling and playing with the other dogs while his limp little legs dragged behind him. Rick and Christian were blown away by the spirit of this dog, who refused to let his injury stop him!

Rick and Christian had no experience with special needs animals, but a few days later, they realized they’d both been searching the web for things like “dog wheelchairs”, and it was obvious that they wanted him in their life. They learned how to express Oscar’s bladder (there are many good videos on YouTube), and they found Tinkle Trousers, drag bags, a stroller and his Handicapped Pets wheelchair. His care was a little intimidating at first, but they quickly got the hang of it and realized it wasn’t much more demanding than it would be for a fully-abled dog. Oscar was slow to acclimate to his wheelchair, but Rick noticed that if another dog came by, he would be eager to play and start moving in his wheels. Rick took him to the park as often as he could for three months and then one day it just clicked – he walked them for a mile to his favorite dog run in Tompkins Square Park (he had memorized the route in his stroller). In the five and a half years that Oscar has been in his forever home, he’s been a happy, fun-loving boy and a daily inspiration. Rick and Christian are very proud that he shows the world his joy and lets people know that they shouldn’t give up on a pet that loses its mobility due to injury or age. 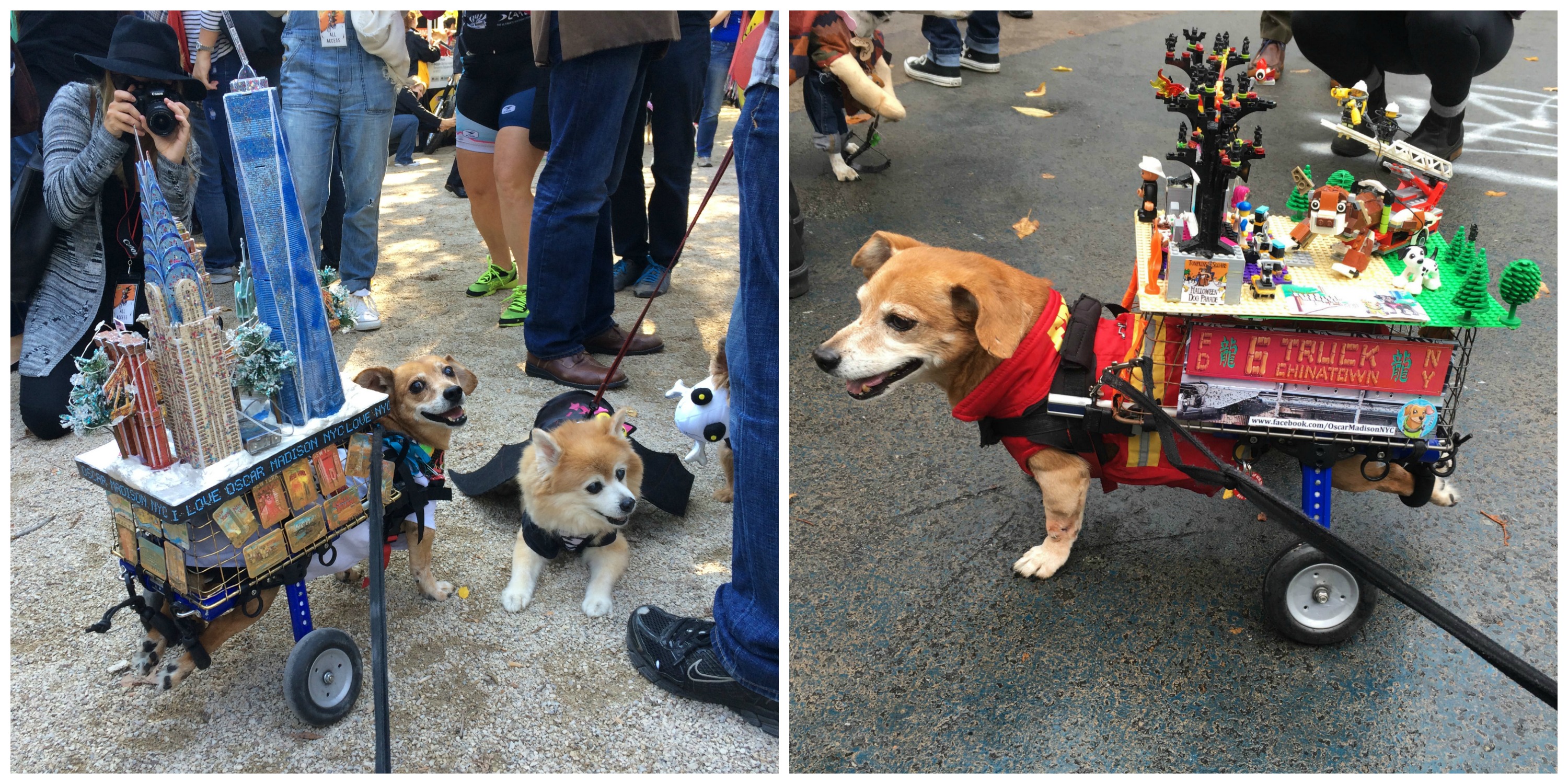 Tiki was a stray in Kentucky and wound up in a high-kill shelter. In Our Hands rescued her and brought her to New York, along with dozens of other dogs. In June of 2012, Rick saw her at random while walking by an adoption event outside Unleashed By Petco on the Upper West Side of Manhattan. There were dozens of dogs and cats in kennels above and below a long line of tables, and she was on the ground next to a pen full of puppies. The crowd was three-deep at the puppy pen, but Tiki was being completely ignored (most likely because she is a black dog). Rick looked at her and she flashed him the hugest smile. He was hit instantly with a wave of love and almost lost it right there on the street.

Christian and Rick had been talking about adopting a second dog, but with Oscar’s special needs, they weren’t sure they were ready. Rick turned to go but thought he should get her name and the name of the rescue just in case, and when he did, Tiki hit her with the smile again! Rick had to leave in a hurry to avoid openly weeping in public, but he was still worried that a second dog would be overwhelming. He spent the first few days that week dragging himself around and wrestling with it, looking at Tiki’s Petfinder profile and trying to think it all through. Then, a good friend said to him “What are you going to regret more? Getting her or not getting her?” Who knew the answer was so simple?! Rick called In Our Hands that day and told them he was interested, but needed to make sure Tiki and Oscar would get along. It turned out she’d been getting so little attention and was so nervous during car rides that they weren’t going to bring her to the next adoption event, but they brought her out that weekend to meet Oscar and the two pups got along instantly! Now she’s his protective big sister, and together they enjoy life in New York City, cruising their neighborhood and visiting as many parks and dog runs as they can. 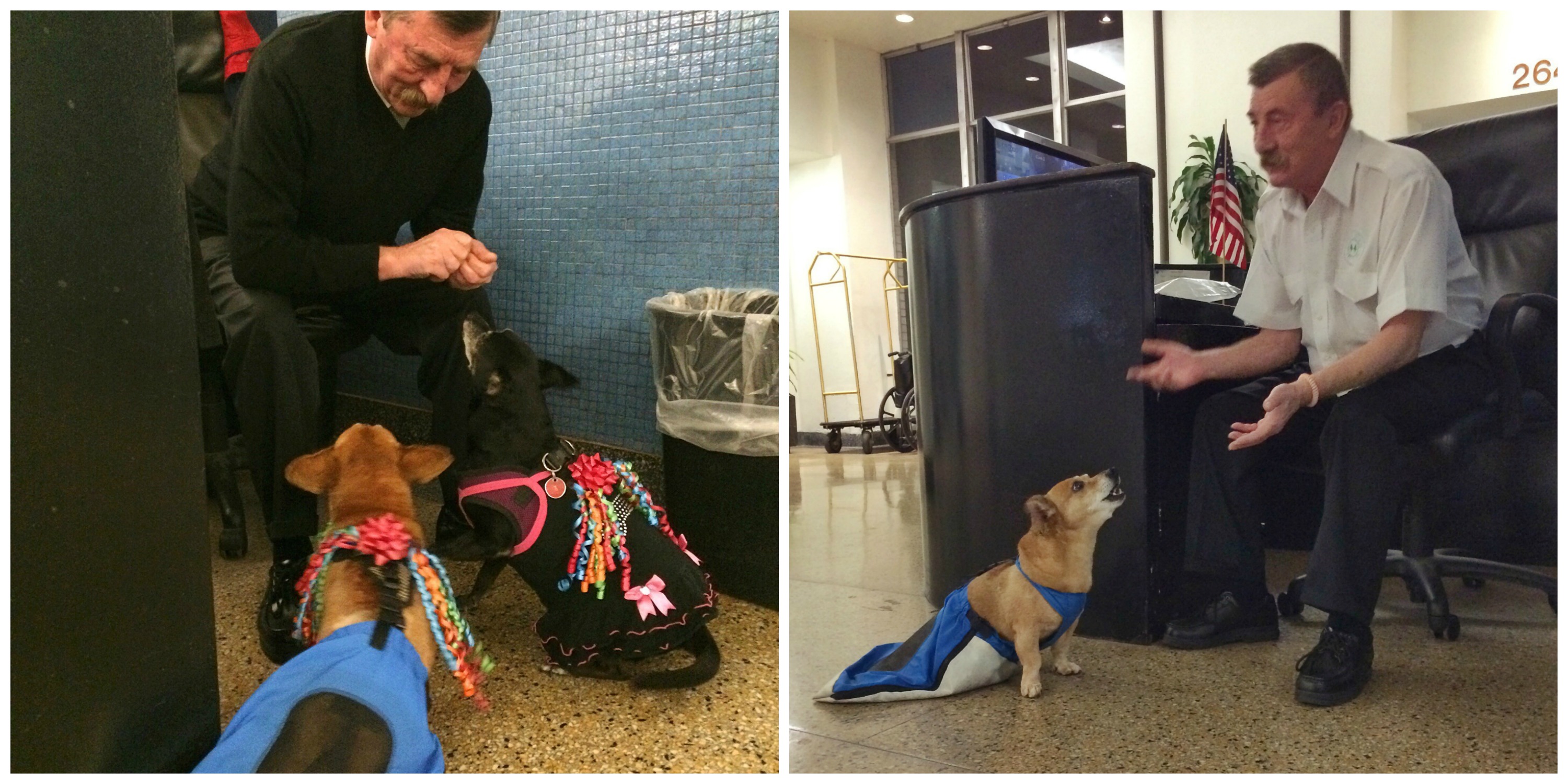 PLEASE READ!! Oscar and Tiki raced to Saluggi’s East @saluggis to thank the heroes that apprehended animal abuser #bryanlepe! They met Alec, the manager, who told us the story: @nypd came by with a wanted poster so everyone could keep their eyes out (go #nypd! ????????) and one of the bartenders recognized him immediately. About 20 minutes later he came in and went straight to the bathroom!! A staffer spotted him and alerted Alec who locked the doors so he couldn’t escape. When Lepe headed for the exit Alec called out “Hey, Bryan!” and he turned to look so there was no question. Lepe tried to get away but Alec grabbed him, called 911 and held him until the police arrived. ???????????????????????????????????????? Everyone talks about doing the right thing but I’m honored to live down the block from people who ACT!! If you’re in New York, come to Saluggi’s on the Lower East Side at 399 Grand Street and show them some love! ???????????? For vegetarians there’s a fantastic eggplant parm, and today Christian had an awesome #vegan pizza! Thanks again to the team at Saluggi’s. We’ll see you soon.

Tiki loves her plush, two dimensional Oscar!! There’s a cute little Chinatown shop a short walk from us on East Broadway, and a woman who works there has always been friendly to Christian and loves Oscar. When Christian was driving Oscar back and forth to Iowa for the Clinical Trial for Paralyzed Dogs she helped equip the car with lots of soft blankets and pillows to keep Oscar warm and cozy. Yesterday Christian visited for the first time in a while, and her friend had this gift for her. Also, crossed paws. Always classy. ???????????? photo by @cmerry

Hurricane Gus @guskatakura landed on the Lower East Side the other night. Oscar did his best to hold on. ????????????

Happy Halloween from Oscar, Tiki and the heroes of FDNY!! ???????????? Thanks to the Chinatown Dragonfighters for keeping us safe every day!! ???????? #halloween #fdny #heroes #i❤️ny #chinatown #dragonfighters #nyc

“Tiki and Oscar here. These smiles are dedicated to our Aunt Josie @joslittle, Uncle Dev, and our rescued cousin, Wally @littlewalterwhite. You guys are the kindest, sweetest, most generous friends two kids could ever hope for. Thank you so much for making us smile so big with your thoughtfulness. And Poppa said that he can’t wait for you to visit New York so he can show you the best time ever. Lots of love from all of us. ❤️”

“Don’t worry, Ox, I’ll clear the way!!” Oscar licked a spot on his arm until he needed a bandage so he’s out of the wheels for a week or so. In the meantime, Momma’s happy to push him in his stroller and Oscar’s happy to enjoy the ride. ????