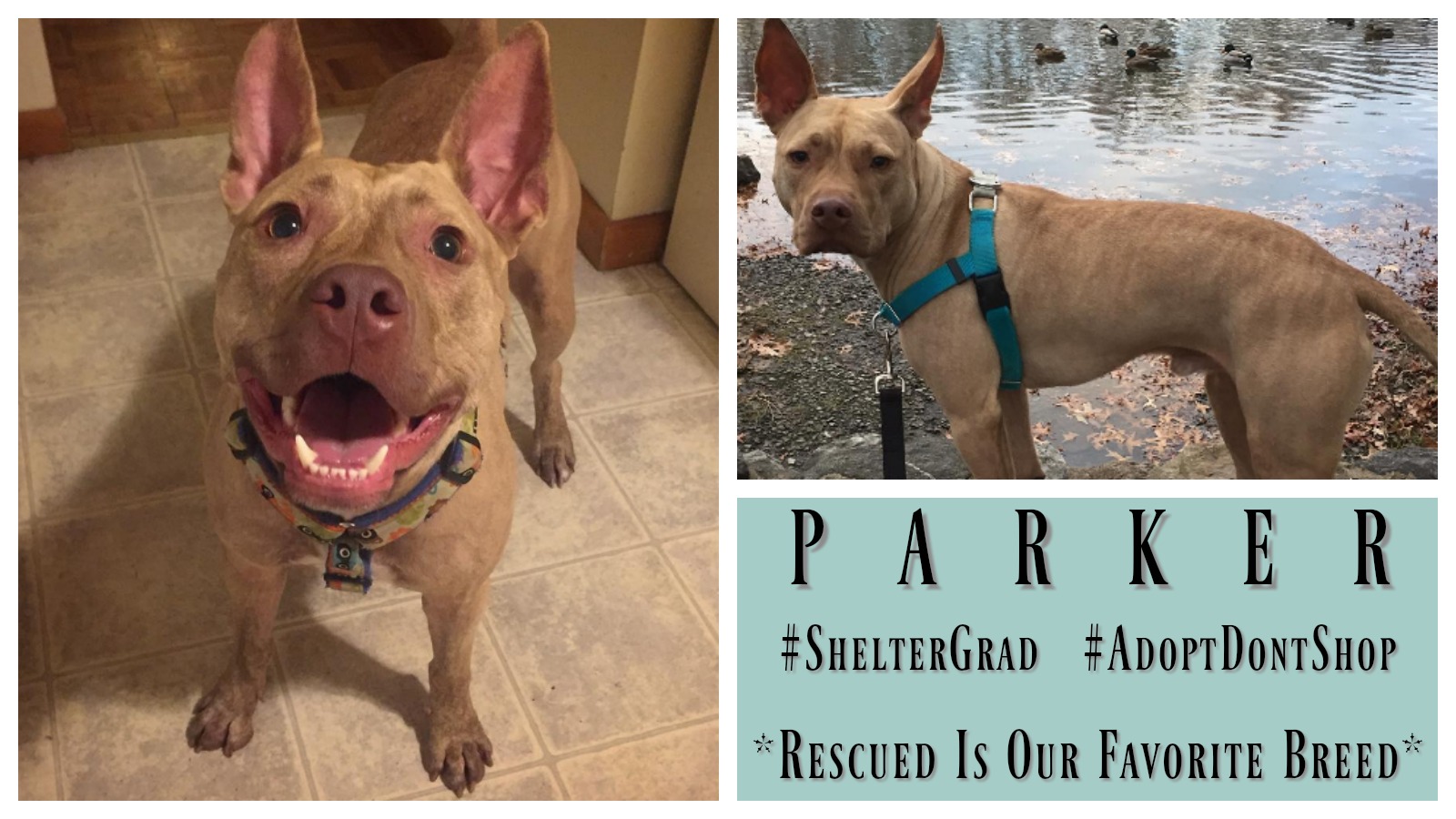 I’ve been wanting a dog for years and last September, I finally decided it was time I get one. I searched extensively, looking for a perfect fit at every local shelter and just couldn’t find one. My roommate’s dog was very selective and didn’t like other females. I was scrolling through the “Urgent Dogs of New York City” page and saw the weekly “to be destroyed” list. I saw this picture of a scared, emaciated dog with the cutest, hugest ears, who was going to be euthanized the following Monday. That same day, I rushed down and drove two hours with Lola (my roommate’s dog) to meet him. He was shaking and was covered in infections and bites from being attacked at the shelter. He was also severely underweight. He and Lola had barely met and I didn’t even get time to get to know him but I knew I had to save him. 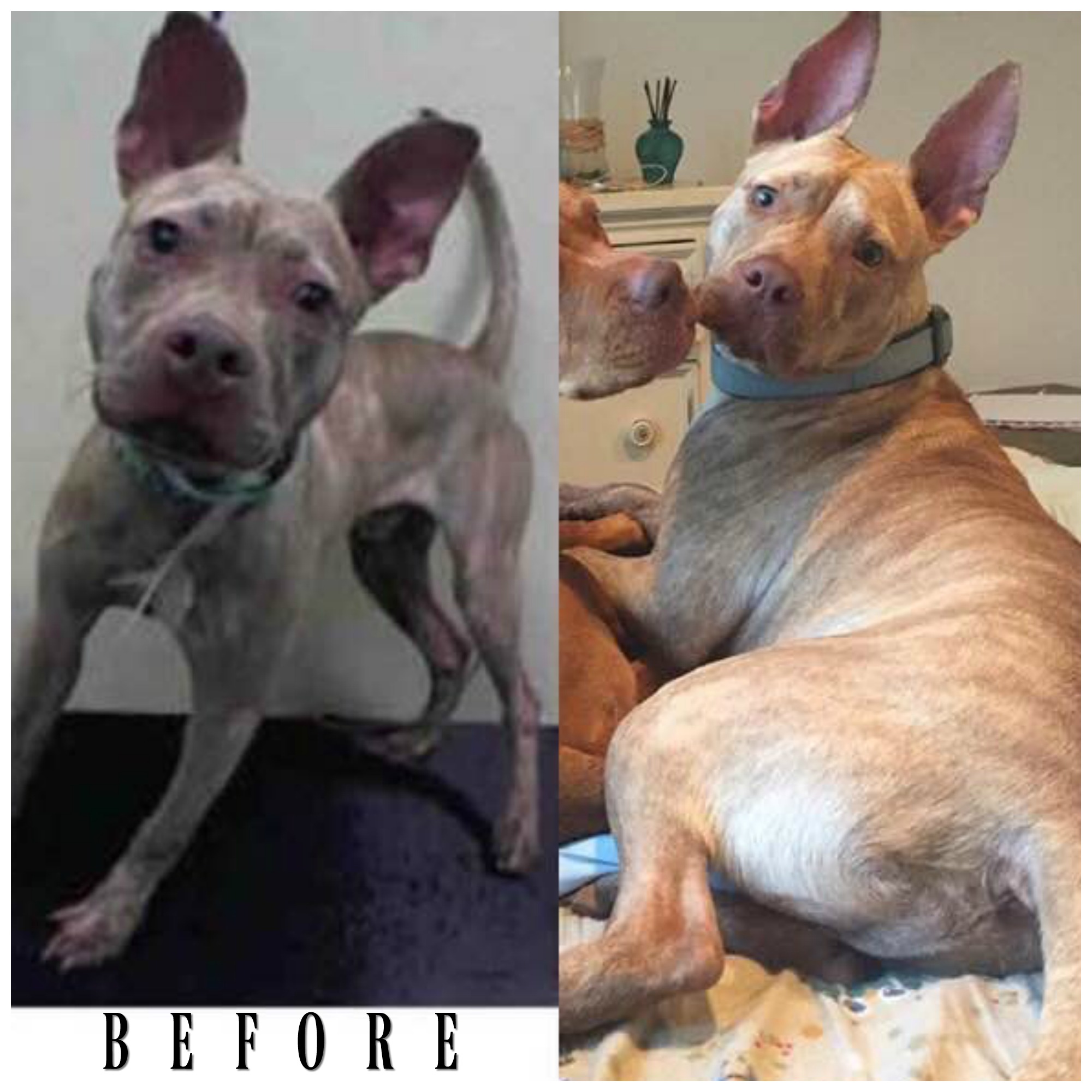 I brought Parker home two days later and realized the extent of his injuries and neglect. He had kennel cough, which turned into pneumonia, he was only 25 pounds even though he was full grown, and his neck was the size of a football due to an infection. On top of that, he had no idea what a leash was, had probably never been inside a house, was not house-trained, had resource guarding, and didn’t even know what “sit” meant. The first night I brought him home, he chased my roommate and I out of the kitchen baring teeth when we put the food bowl down.

I took him to a trainer and they said Parker couldn’t be helped, that it was genetic, that he’ll never get over it, that he’ll never be able to be around dogs and I should put him down. I sobbed leaving that training session and almost gave up, but I refused to. I hand fed him for weeks and made sure there was always food available, so that he learned to trust me and realize he will never starve again. After a month of TLC, four rounds of antibiotics, and surgery, I was able to bring him out in public. I got him into obedience training and started bringing him to the dog park. He was a star!

Fast forward one year — Parker has blossomed into one of the most loving, affectionate, and social dogs I have ever met. Even after the neglect, abuse, and starvation, he trusts and loves any human, dog, and animal he meets. He was such a quick learner and now knows all commands. I can’t say it was easy, or that he was perfect from the start (or even that he’s perfect now!), but it was so worth it. He has become my best friend, my baby, and my companion. He makes me the happiest dog owner in the world and I couldn’t imagine my life without him. He’s overcome so much and is one of the strongest, sweetest souls I know. He even won Lola over, who is very picky with who she likes. He’s infamous at the dog park for being such a goof and being so good with other dogs. He loves to share toys and I’ve never seen a dog he hasn’t liked. Or human!

Is rescuing easy? No! Is it worth it? YES! This dog lived a life of misery and was going to be euthanized and added to the other 800,000 pit bulls that are killed in shelters every year. I got the chance to save him and see him blossom and grow into an amazing dog. I thought I was helping him, but he really helped me. He is the reason I push on because if he can overcome his struggles, so can I. The only thing I regret was not being able to take the rest of the dogs at the shelter with me. Please, save a life and adopt a shelter dog like Parker.

Just found out chuck it makes squeaky balls. My life is complete.

When you’re tired but the treats too good to put down ????

The moment you realize you’re going 50mph into your humans face.

The look of betrayal when mom eats dinner and doesn’t share ANY of it. ????

Just call me babushka. Thanks @courtanai for the snood ❤

Thank goodness you’re here! I was just sitting here minding my own business and my toys exploded!

What? This is a totally appropriate place to put my bed. ???? if I can’t be on the couch I’m gonna make my own couch right next to the couch!