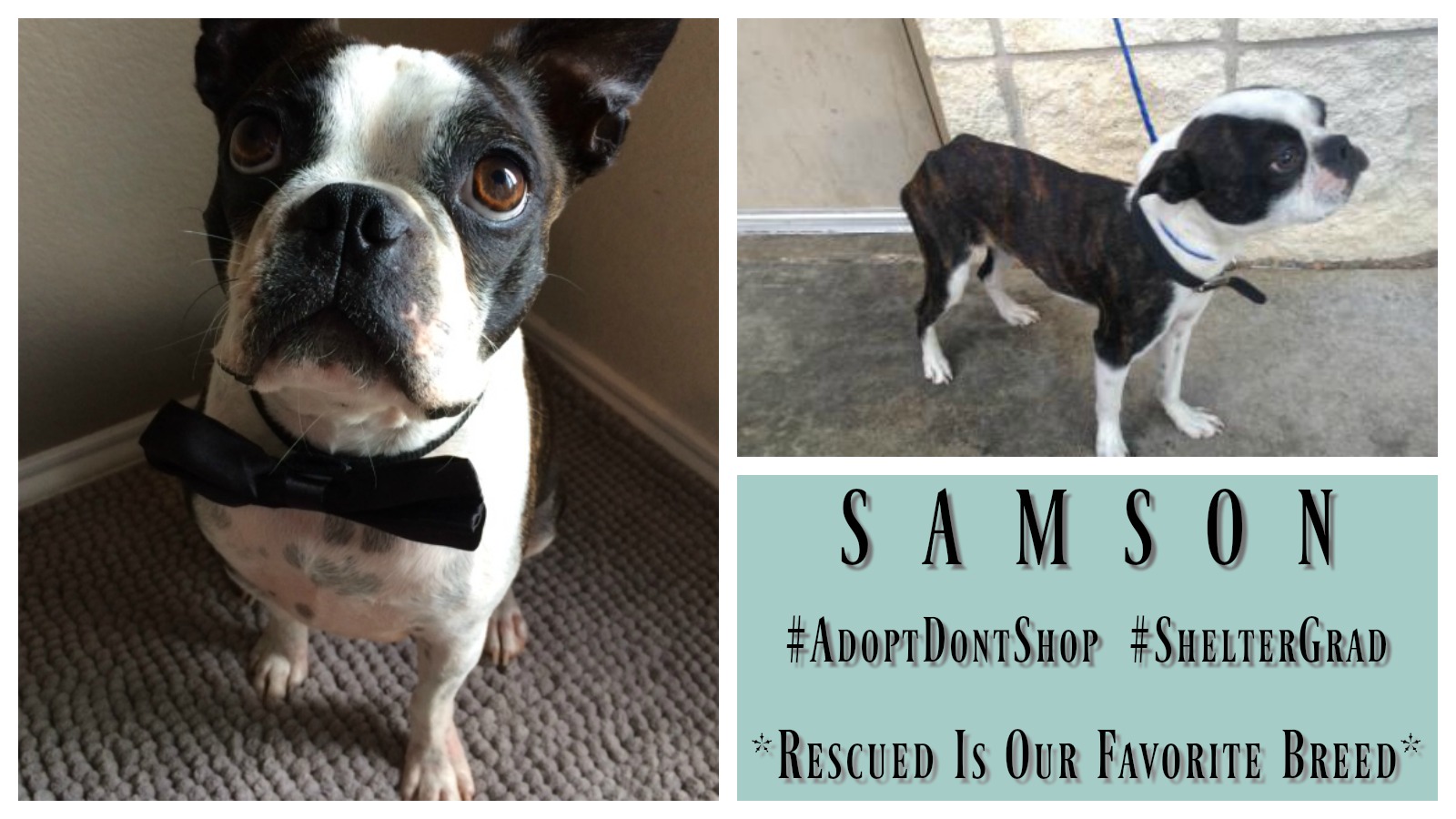 We had been looking for a dog to add to the family for Christmas. We definitely wanted to rescue and didn’t care what breed, however, our dad really loved Boston Terriers. After doing a lot of research on the breed, we all agreed that a Boston would be a perfect match for our family. Our next step was to go on petfinder.com and search for available Bostons. A few came up but it seemed they were all snatched up so quickly. Christmas passed and we still didn’t have our new family member. 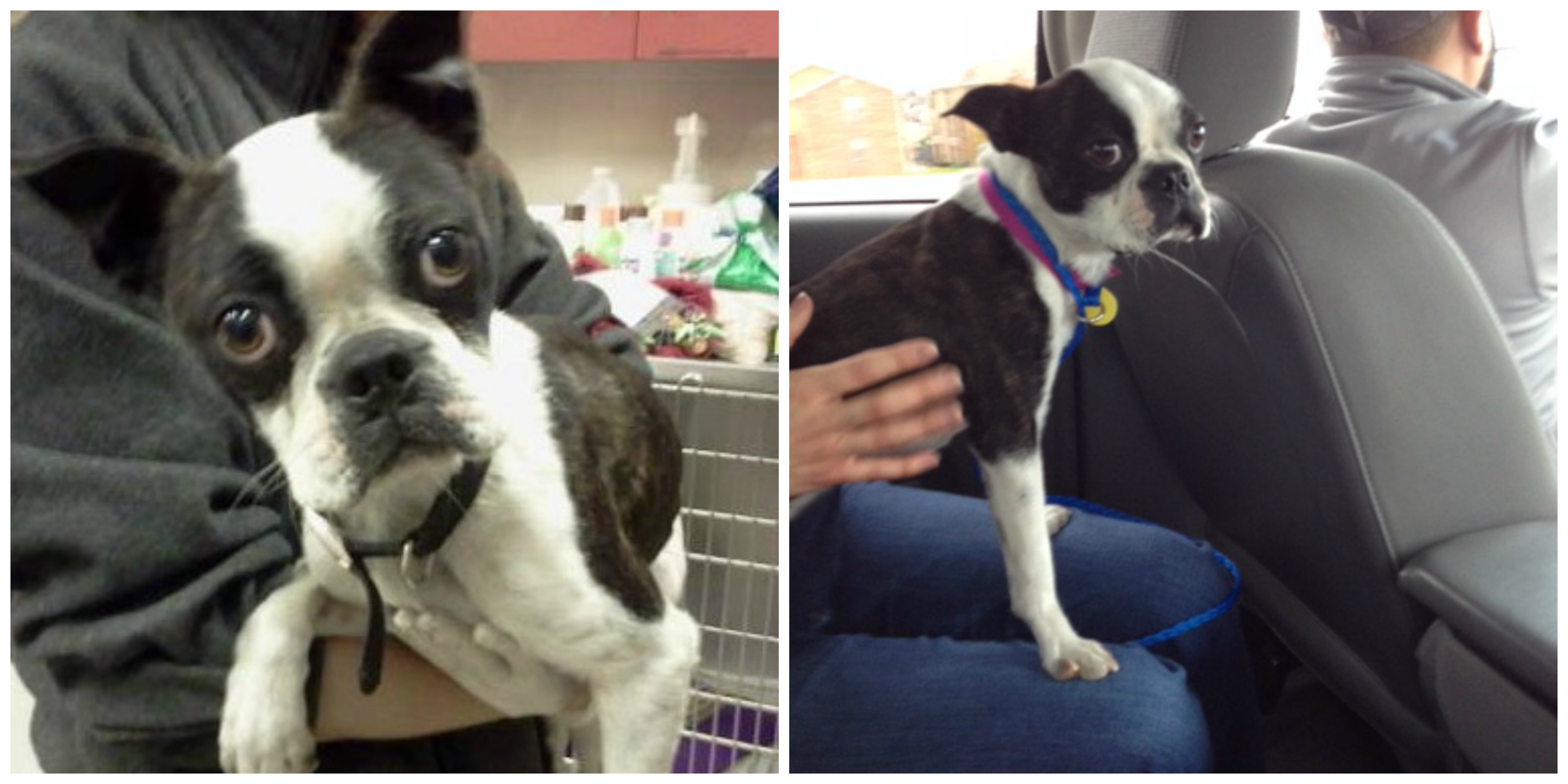 On Dec. 27, 2014 we got a notification. Boss, a beautiful Boston Terrier, was just turned into the Tri-City Animal Shelter. We traveled an hour to go see him. We went into the meeting room and Boss was brought in. He paid little mind to us. He went straight for the treats they had on the window sill. He was so hungry. Poor Boss was severely malnourished. He was 13 pounds. His ribs, spine and hip bones protruded out of his skin. His head looked too big for his small frame. His nails were so long and he was full of dandruff. It broke our hearts knowing he was out by himself in the cold of December. No food, water or companionship. So skinny that he had to be freezing out there. We just had to take him home with us. He needed love. We proceeded with the adoption. 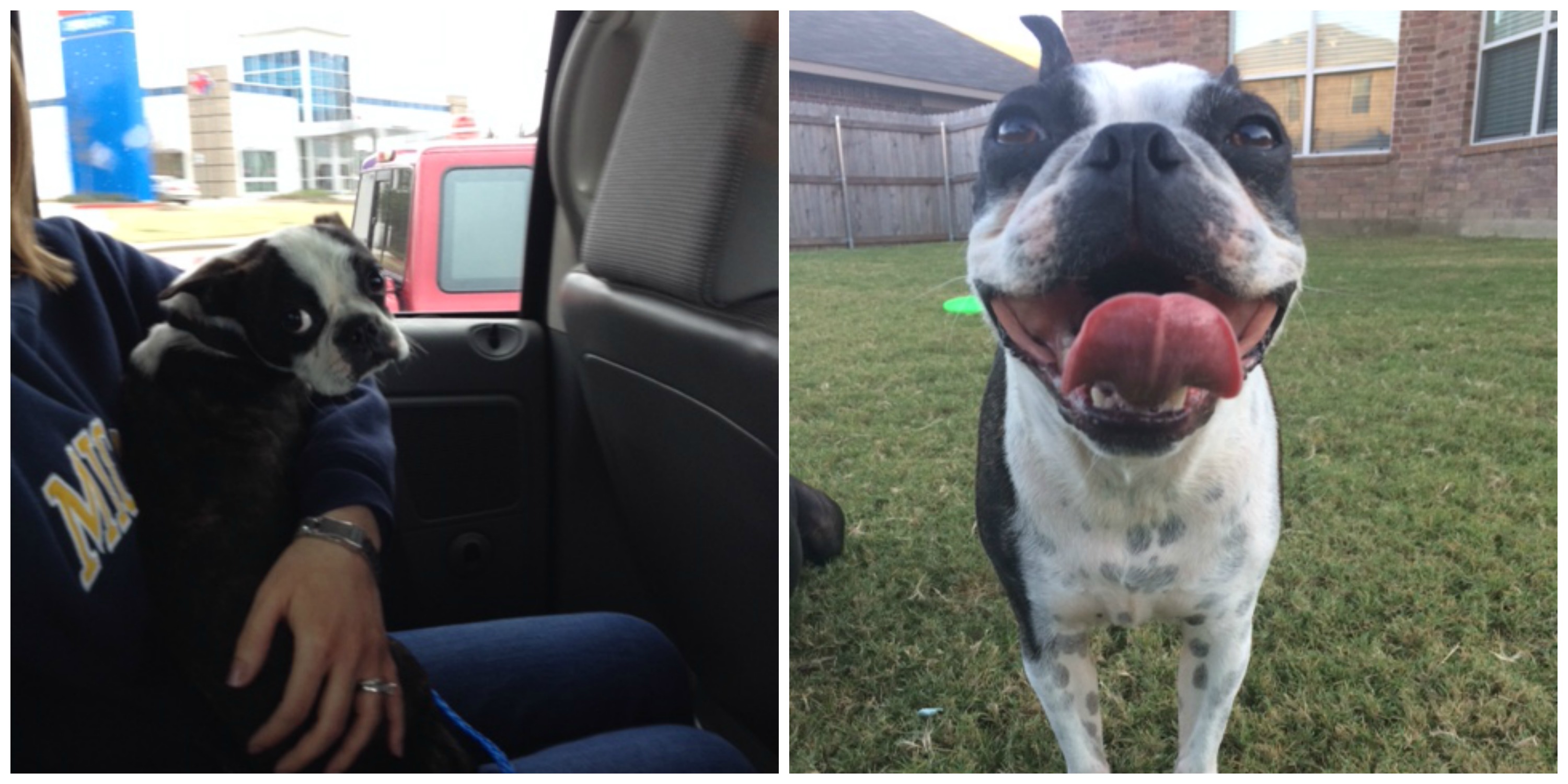 Despite all of the stares, we took him with us to PetSmart and bought him his necessities and toys. And a new name tag. His name was now Samson. Although his name didn’t match his appearance (yet), we gave it to him because he was so strong. He was a fighter! 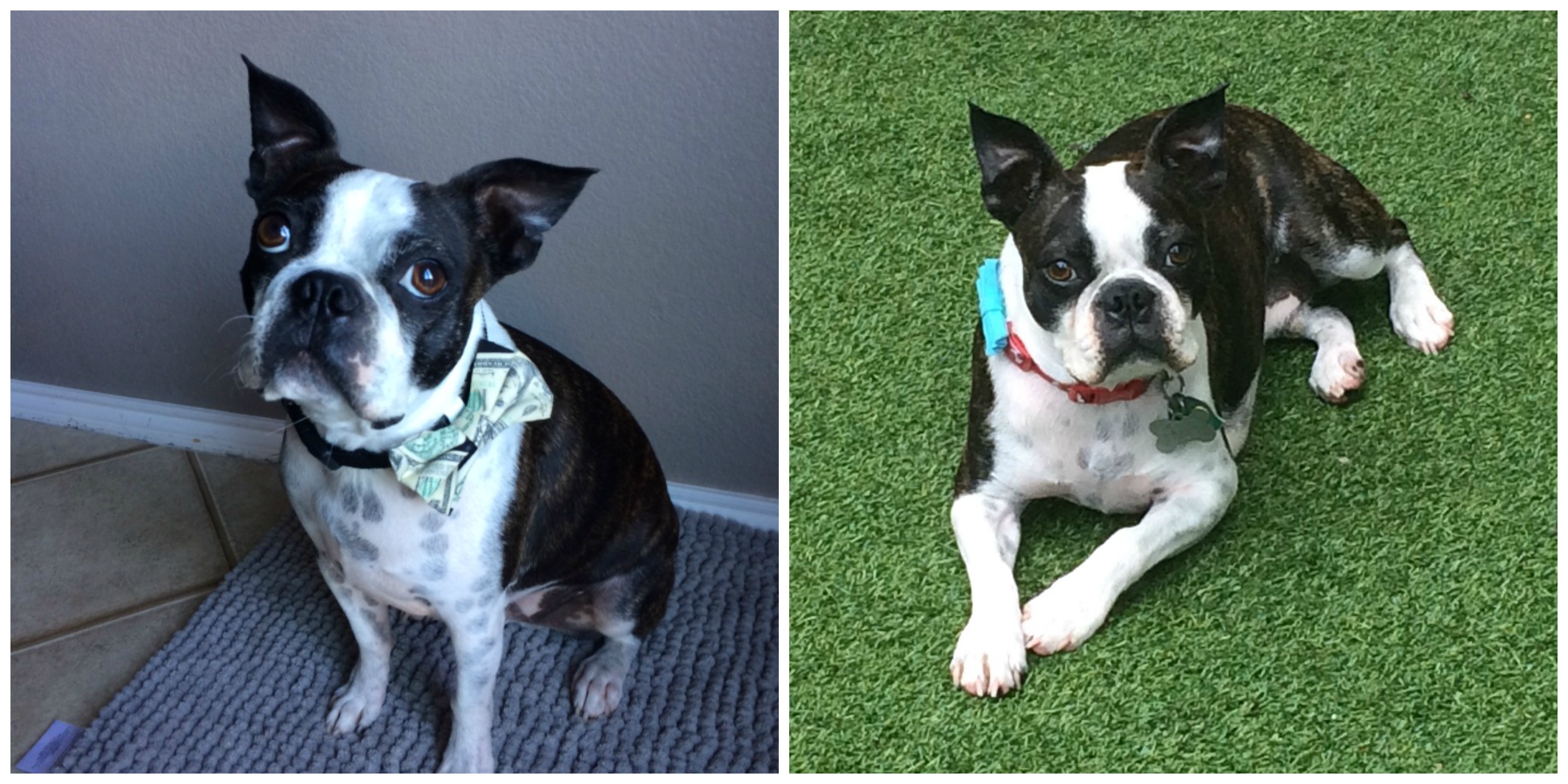 It took him a while to get comfortable with us. He never touched his toys. He would vomit up his food quite often, and would cower and shake every time, as if he thought he was in trouble and we were going to hit him. He would never relax. After about a month, his true personality began to shine. It all started with a game of Tug-of-War with dad. After that, he was always ready to play! 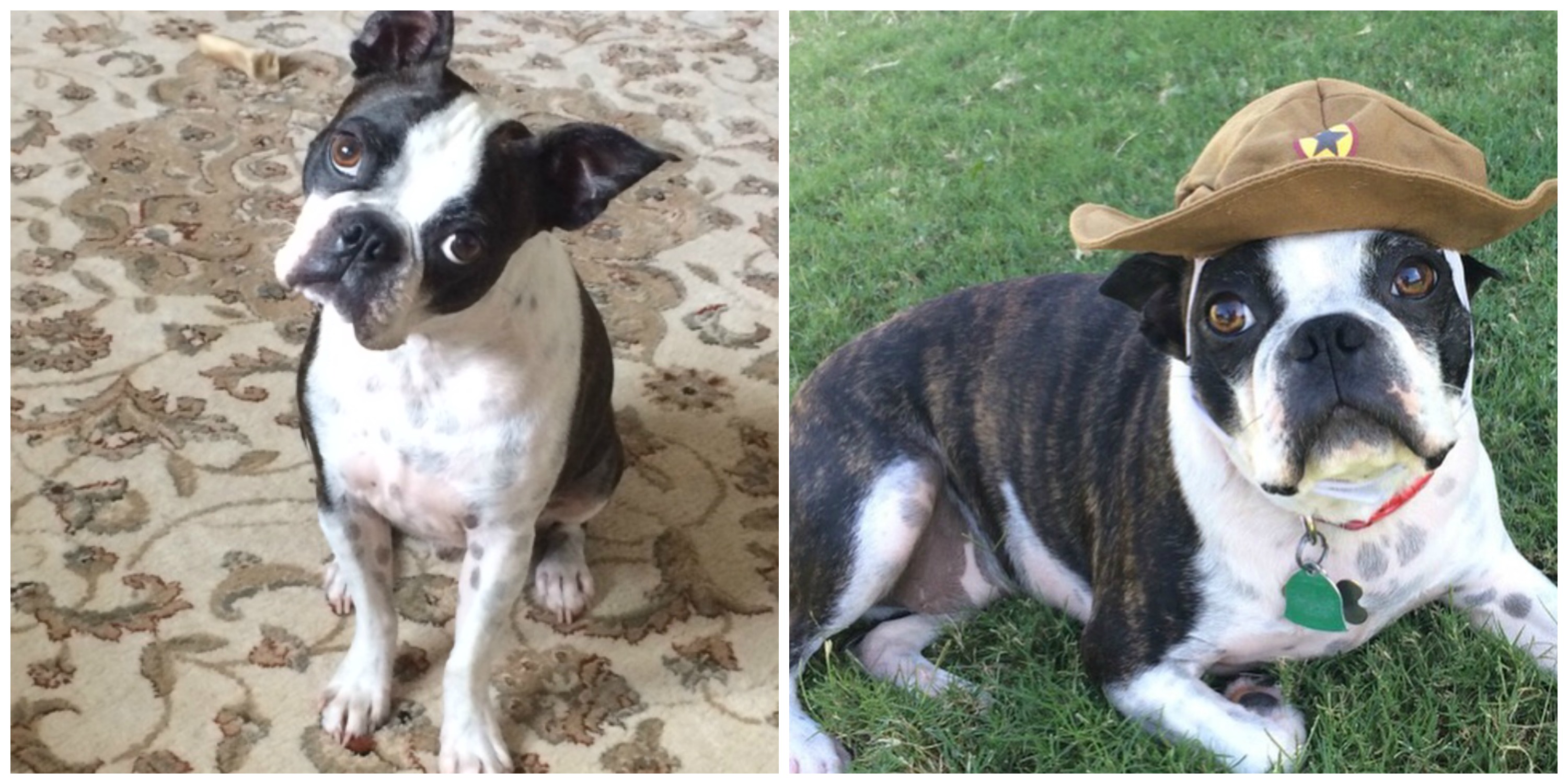 Samson is the love of our lives. He is happy and healthy now. He is so incredibly gentle and sweet. He loves to play fetch, Tug-of-War and wrestle with his little brother, Hercules. We know this little boy was meant to be ours. Everything fell into place perfectly. We can’t even begin to imagine our lives without him.

We were tagged by our pal @sid_the_staffie to do the #myhumanscallme challenge! So here are all of my silly nicknames: Sammy, Sam, Sam Bobo, Sam Bo, Sambony, Fat Boy, Samuel, Handsome Boy, Sammy Jammy, Pup Pup, Sammy Hammy, and Little Big Brother-Samson. Would @kryptodynamicterrier @joniethebostie and @msbellapuppy like to play along? #furcedesforhermes

I just wanted to share some more pics of my adoptaversary/bday with you guys! There were so many cute ones so we made a little collage???? Thank you for all the love I received on my special day????-Samson #bostterrier_feature

Woohoo!! We got our Mr. Bonejangles in the mail! We love him so much. That’s why he’s on his back and his tag is covering the photo. We wouldn’t stop touching him???? Thank you a million times @sheedandkembe for him, our delicious treats and your beautiful photos. You boys are incredibly handsome. We love you!????❤????

‼️Please read: We just wanted to say thank you so much for following, liking and commenting on our photos. We appreciate you all so much. We started our account in late August because our sister loves taking pics of us. We love seeing all of your photos as well. It makes us so happy knowing there are so many crazy pet owners like our family???? We had no idea people did awesome giveaways and sent out christmas cards and did so many nice things! And we’ve won a couple giveaways and have received beautiful cards for christmas and we are so grateful. For that, we are planning a fun giveaway for when we reach 5000 followers! This will give us time to do some shopping???? The giveaway is our way of saying Thank You to all of you, so stay tuned for that! We love you❤ #bostterrier_feature

Is getting in shape on your New Years Resolution list? Well look no further. Grab your hoodie and meet me at the park. We’ll play football everyday and I promise you’ll see results in no time????????????????????-Samson. #bostterrier_feature

Happy New Years Eve everypawdy???????? We are wearing our beautiful, fancy bowties from our lovely friends London and Meiling @808london_hawaii ❤ We are so excited to bring in the new year. Thank you all for being our friends????

Hey!! Give me back my ball!⚽️ Happy Thursday everyone!

????Today is my Gotcha Day/3rd Birthday!????I’ve been with my family for 2 years now. We don’t know my exact bday but the vet figures it’s pretty close to my gotcha day so we just celebrate them together.Some people think i’m older because of my eyebrow. But I promise, it’s just blonde and maybe some white from my blaze???????? Do you like my bday necklace?-Samson

This says “SAM” and Sam I am. Me and my bubba are taking over an awesome account called @pawmopolitan for 1 week! Everyday we will post a pic of ourselves as well as one of our friends. We hope you guys will check it out! Thanks pals????

Merry Christmas Eve everypawdy!! Hope you have all been good boys and girls???????????????? This is our entry for the #joytothewoof2016 giveaway hosted by @ohmydoggies @mr.marcel and @lizzie.bear

Sometimes I feel ugly…then I look at my brother and get over it!????. This is our one-liner entry for @oscaryycfrenchie ‘s hilarious #oscarpepperoni contest. Happy Birthday Oscar????Thanks @zuko_thebostonterrier and @lilythepirate for the tag! @georgie.porgie.pug @txfoxygirl and @lordloki_akita would you guys like to enter? Follow @oscaryycfrenchie for all the details???? (just a joke of course. We know we’re cute????????)