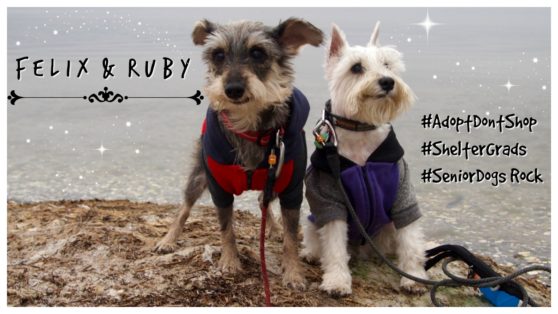 The 9 year-old Terrier named Felix was adopted in August of 2015 from Second Chance Pet Adoption League in New Jersey.  When he was dropped at a shelter in Queens, NY, he had bladder stones, rotting teeth and a heart murmur. Second Chance pulled him, knowing that dogs that age and with such serious health problems rarely make it out of the shelter alive. After several surgeries and a month in the hospital, Felix was free of bladder stones, completely toothless, and ready to find a family that would love him for the rest of his life. Felix’s forever family had recently lost their 11 year-old white schnauzer, Levi, and as soon as they saw Felix on petfinder.com, they knew he belonged with them. They felt like Levi had sent him to them to help them heal. Felix’s family decided to name him ‘Felix’ because it means ‘lucky’ and ‘happy’. Felix was so lucky to be pulled from that shelter and taken care of.  Unfortunately, so many others in his situation don’t get that chance. He’s also the happiest dog his family has ever met! He loves playing with toys, meeting new people and being held. People are always surprised when they learn he is a senior, because he is so joyful and energetic. He is an absolutely amazing and unique dog, and they are thankful every day to the people who work in rescue who give dogs like Felix a second chance. 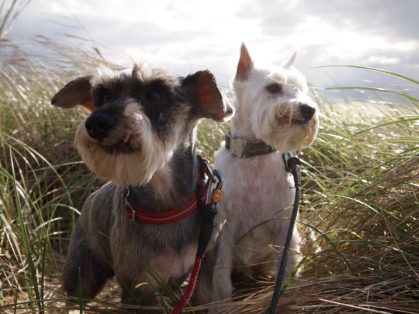 Ruby‘s life has changed a lot in the past 5 months! She was found running down the street next to a landfill on January 1st, 2016 in Atlanta, GA. She was almost completely bald, and what hair she did have was matted and flea infested. She suffered from severe skin infections and almost all her teeth were rotting. The landfill she was found in is a common dumping ground for dogs– rejected breeding dogs, injured fighting dogs and even dog corpses are sadly, not uncommon there. Thankfully, a kind woman picked Ruby up and called a local rescue, who took her in. Ruby’s rescue, Fighting for Dawn Senior Sanctuary, has such a heart for the neglected and especially the older dogs, and they immediately knew that Ruby was special. Fighting for Dawn estimated her to be about 12 years old. After a month of int 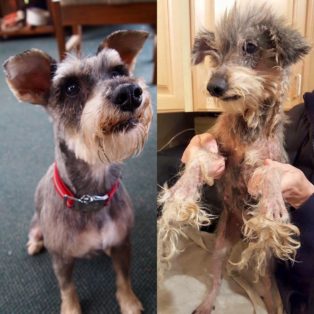 ensive care in the rescue– medicated baths, antibiotics, a dental and more– she was ready for her forever family. When Ruby’s forever family saw her pitiful, scared photo on the rescue’s Facebook page, they fell in love. They just wanted to love her and provide her with all the good things in life that she’d been missing out on for so long! Ruby has been an amazing addition to their family, and she has come so far since they adopted her! She has changed so much physically– her coat has grown in beautifully and she is strong and healthy. But the biggest change is how comfortable and happy she seems now. She is very brave and outgoing and loves experiencing new things, like camping, swimming, and holding her head out the car window, and most importantly, having a family who loves her!
Felix and Ruby’s family hope that their stories will inspire others to adopt older pets.  Senior pets still have so much life to live and SO much love to give!!! 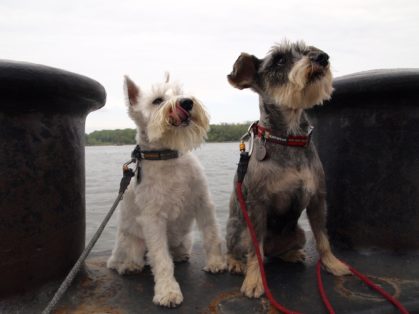 “May the saddest day of your future be no worse than the happiest day of your past.” Irish proverb Happy St. Patrick’s day weekend! ???????? #stpatricksday #werelate #ohwell #felixandruby

Our super handsome friends @miloanddeuce tossed us the ball all the way from the gulf coast in Houston, TX, for the #HowFarCanLennysBallFly challenge! Wow! We are not so sporty, so we had to work pretty hard to catch this ball all the way in Edgewater, MD! We are tossing the ball to some friends all over- good luck!! @maxtherescueschnauzer @puff_doggie @dedtrr2 @geegee_sassy_pants PS mom used a yarn ball because it’s the best we could do in our house! We are a NO SPORTS FAMILY! ????????❌????⚽️????????????????????⚾️????????❌???????? ????????#felixandruby #felixproblems #rubylove

“I can see him sitting in the orchestra, his head raised confidently as if Beethoven had included a part for barking dog.” -Billy Collins #felixproblems

I got a new sister! ????❤️???????????????????????????????? Meet Ruby Victoria! ???????? Ruby was found on New Year’s Day running down the street by a landfill in Atlanta, Georgia. She was scooped up and taken in by a wonderful rescue, @fightingfordawn. She was covered with fleas, missing most of her hair, and what little she had was a matted mess. The wonderful people at the rescue have taken great care of her since she was found– she has started growing back some hair, had rotting teeth pulled and gotten up to a healthy weight. This weekend she was finally healthy enough to go to her forever home, and we are so happy that it is with us! We took a long road trip to go get her, and we are already madly in love! She is about 12 years old, and it looks like she has been neglected for a long time. It will take some time for her to finish her recovery, but she has already come a long way, and we are excited to watch her continuing transformation! #rubylove #rubyanddad

T-shirt quilt for @kushowitz is all ready to be shipped off to Norway! ???????? We helped a lot by walking/laying on it at every stage of the process. ???????????? #sorryDave #productesters #felixproblems #felixandruby

“This was love: a string of coincidences that gathered significance and became miracles.” Chimamanda Ngozi Adichie, Half of a Yellow Sun #rubylove