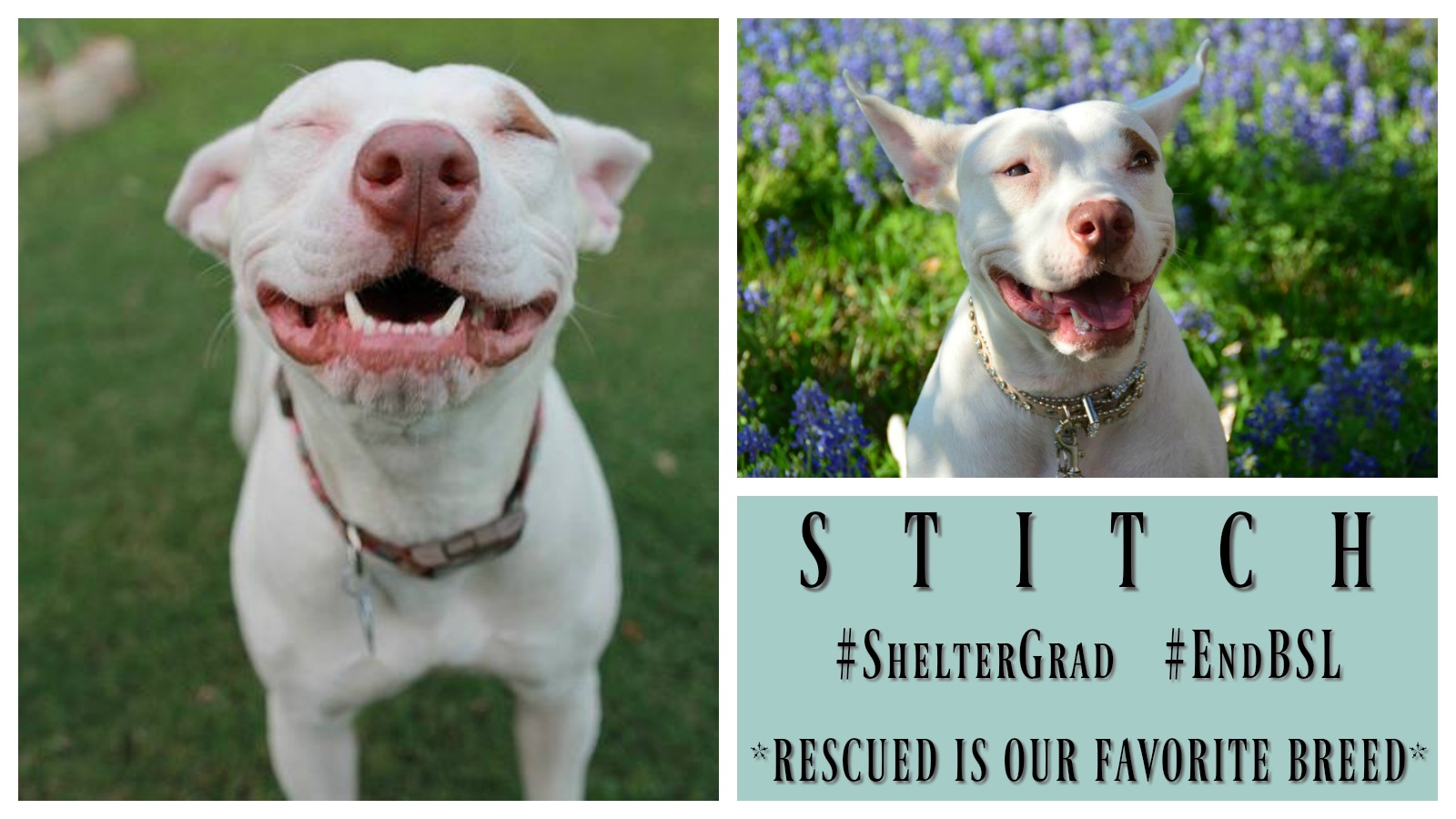 It is by opening one’s heart to all things possible that you can begin to imagine that not all “happily ever afters” involve a princess and a frog. Sometimes, it could be just an ordinary human being and an Amazing “Stitch.”

Stitch was picked up as a stray on May 7, 2014 when she was about three years old, near Sand Hills, TX in the county of Bastrop. She was taken to the Bastrop County Animal Shelter where she was spayed, vaccinated, treated for multiple parasites, and had her mug shots taken as a part of the routine intake. 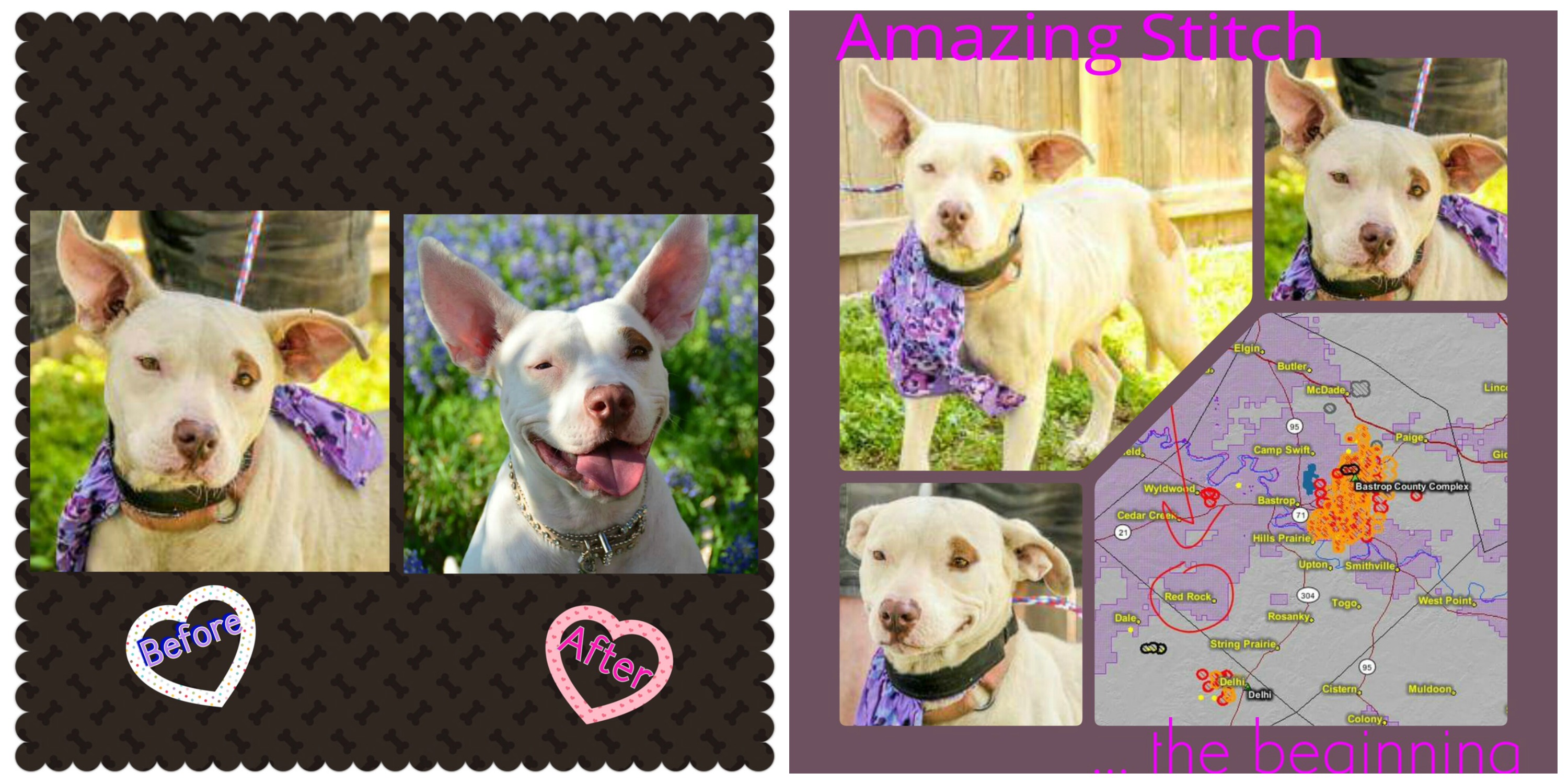 Despite her wonderful disposition, she was continually overlooked for a forever home and the volunteers knew they had to do something quick, as Bastrop Animal Shelter is not a “no kill” shelter. Their only hope was to transfer Stitch, then known as “Grace,” to a foster dog program at a nearby halfway house to live with the residents who were in the addiction treatment program until they could find someone to foster her in rescue. 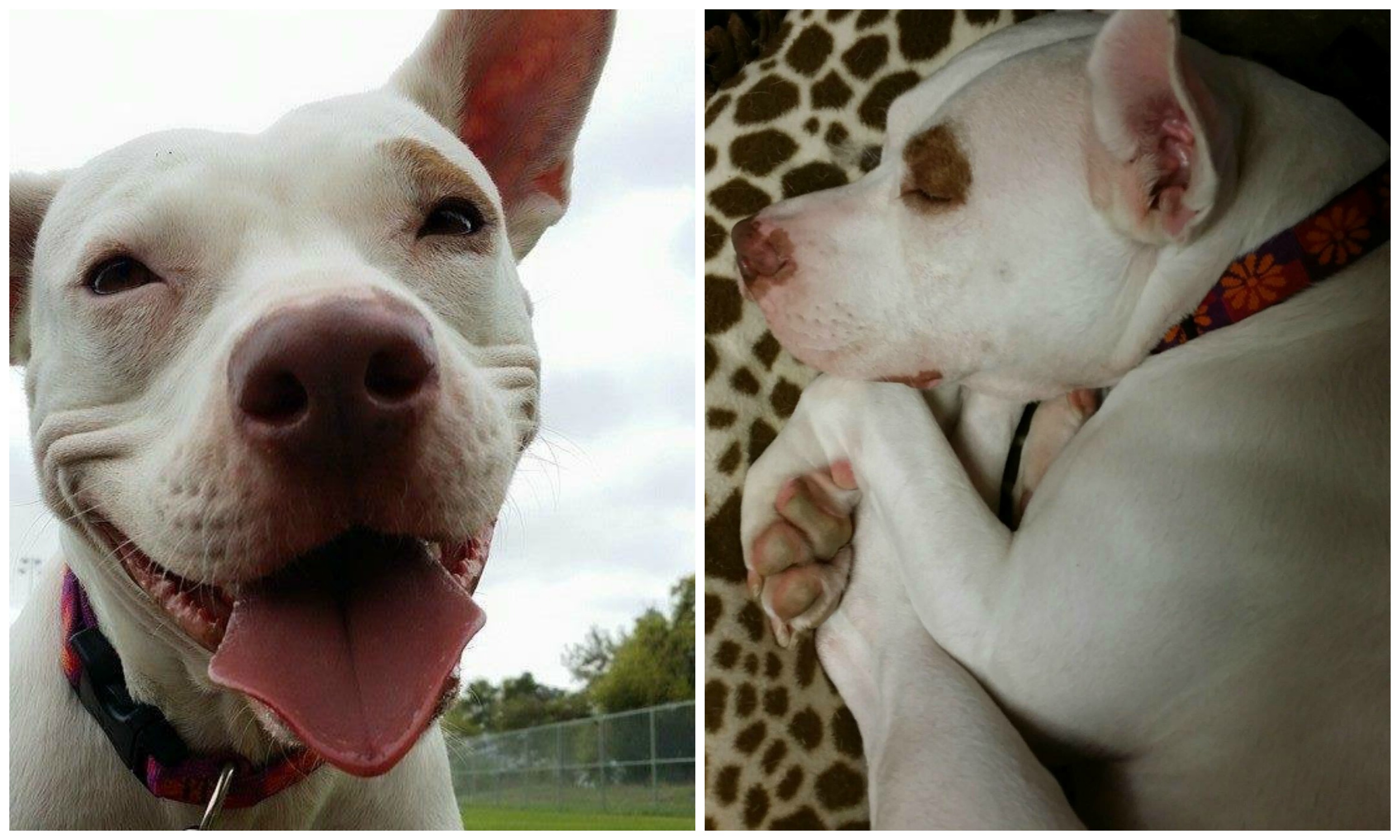 “Gracefully,” in September 2014, she joined Austin Dog Rescue, where she would come to work with Elizabeth, her new foster, who is a veterinary assistant. It was also through Elizabeth that she met Jeanette, her soon to be forever mom. Over the course of four months, Stitch not only moved her own bed and toys into Jeanette’s office, but she moved into Jeanette’s heart. 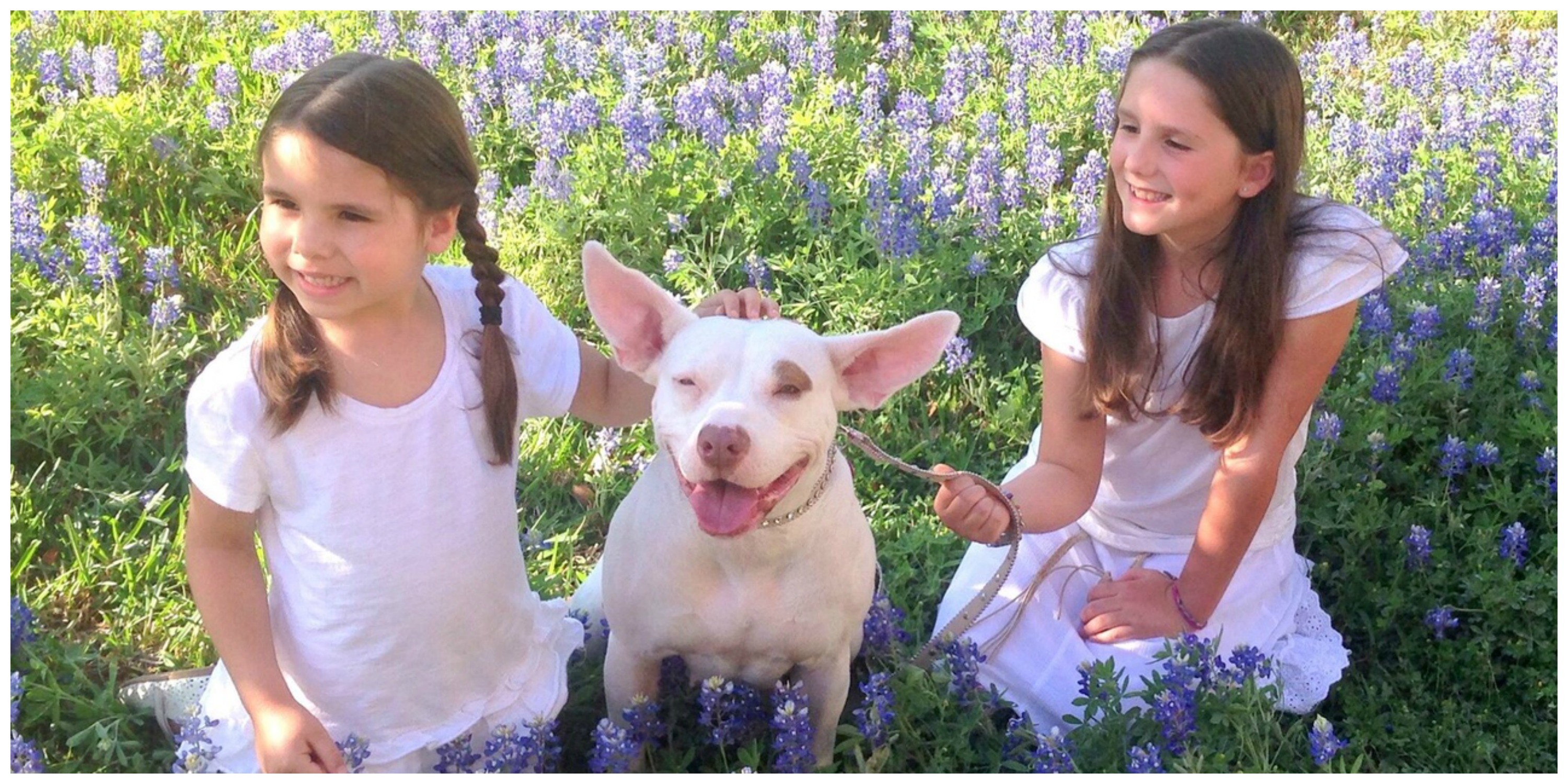 It was upon realizing that Stitch had four applications that all fell through for one reason or another that they must be meant for each other and once Jeanette spoke it out loud to Liz, who was in the other room working, Stitch got up from her bed, walked slowly, yet deliberately to Jeanette, placed her chin softly on Jeanette’s knee and looked her directly in the eyes. Apparently, Stitch already knew what sometimes takes us humans too long to figure out, and thus began their happily ever after…. 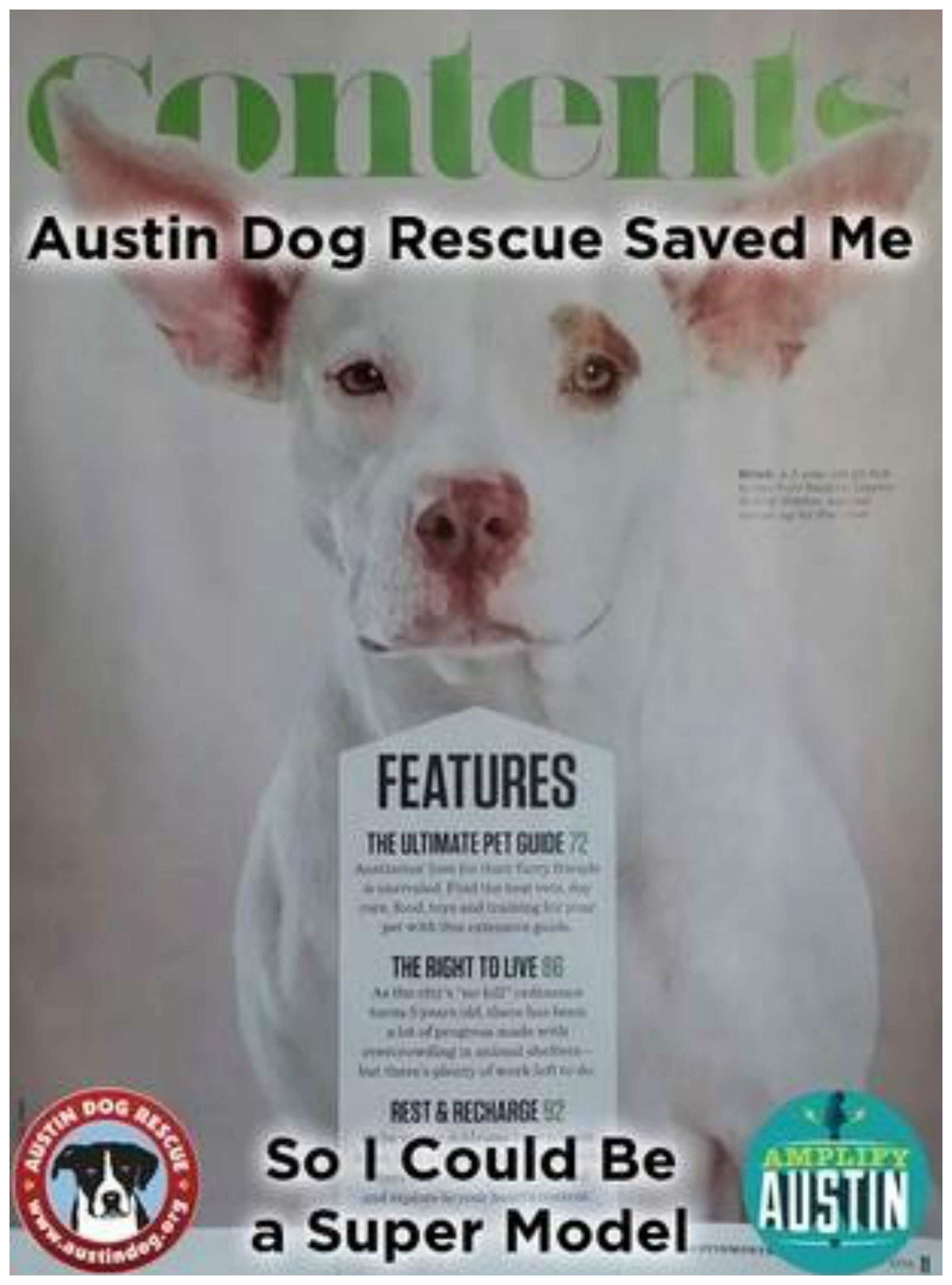 Jeanette once made the statement that she could never own a bully or dominant breed dog because of all the breed discrimination, as she does not own her home. That has quickly changed to, “I will live in a box if I have to because this amazing girl is going home with me.” She could feel in her bones that Stitch has a purpose they need to fulfill and it was not long after that her delightful and ever engaging personality began “changing the world, one heart at a time.”

It has taken two years for Stitch to completely trust and bond with Jeanette and in that time, she has learned K9 Nosework, and attained her Canine Good Citizen Title with AKC. Her most notable accomplishment has been keeping them from living in cardboard boxes.

Stitch has managed to break down barriers of breed discrimination by being allowed to live at two different apartment communities. All because of her amazing ability to change hearts, she has completely earned her title “Amazing Stitch.”

Stitch is now going on six years old and they have lived and loved so much over the past two years. As Jeanette reflects on her shelter name, “Grace,” she believes she would have rather never changed it, because it encompasses all that Stitch stands for. 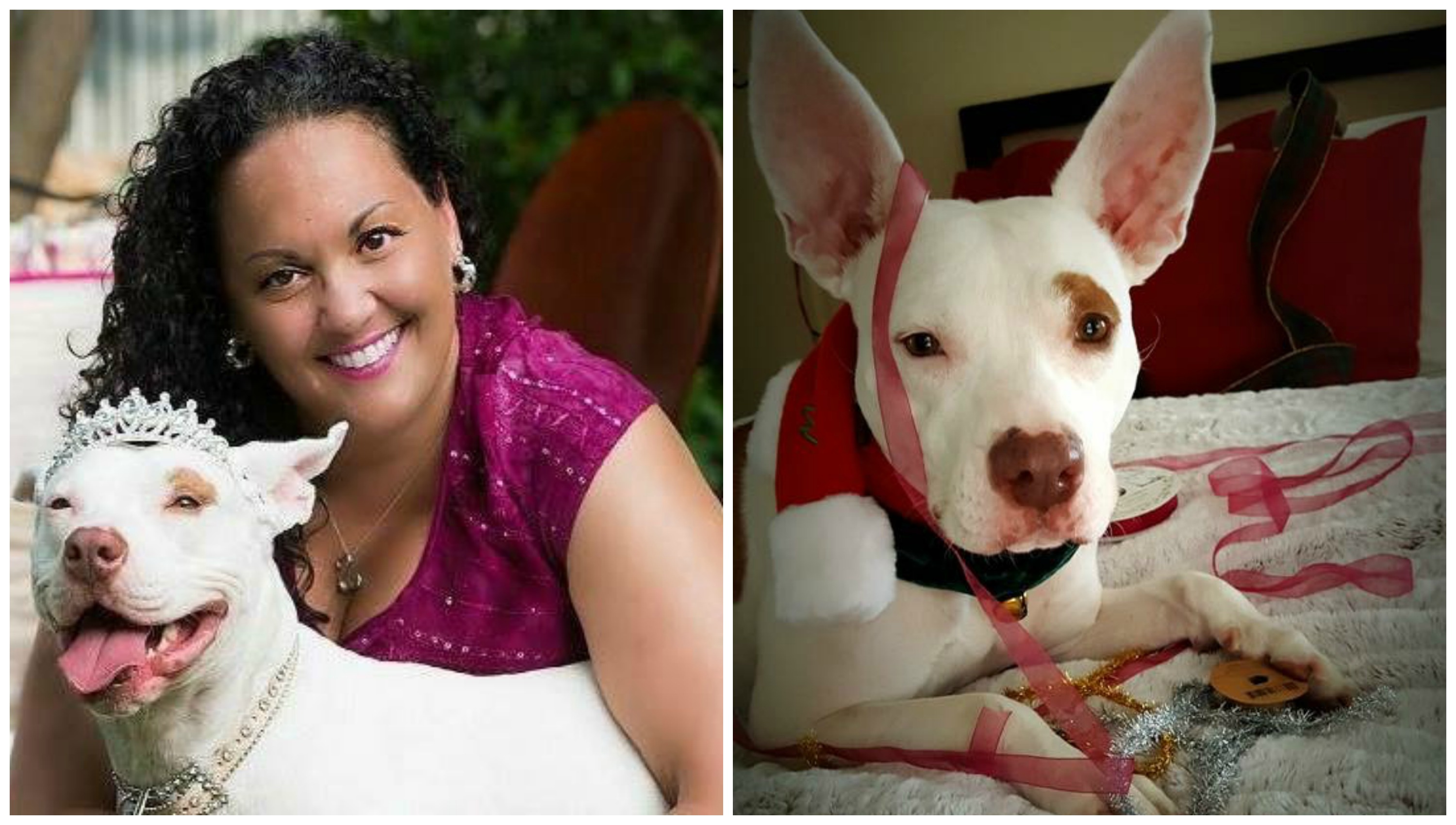 Stitch and Jeanette have had a bit of a deviation from their original plan of Stitch being a Child Therapy Dog, because Jeanette needs her to become her service mobility dog. In February 2016, Jeanette was admitted to the hospital with a pathological fracture of her left femur and it was discovered at that same time that she has Stage IV Metastatic Breast Cancer. They have come full circle and Jeanette supposes that what she felt in her bones all those years ago, Stitch knew in her heart. Her ferociously loving Pit Bull type dog has been nothing short of Amazing, “changing the world, one heart at a time.”