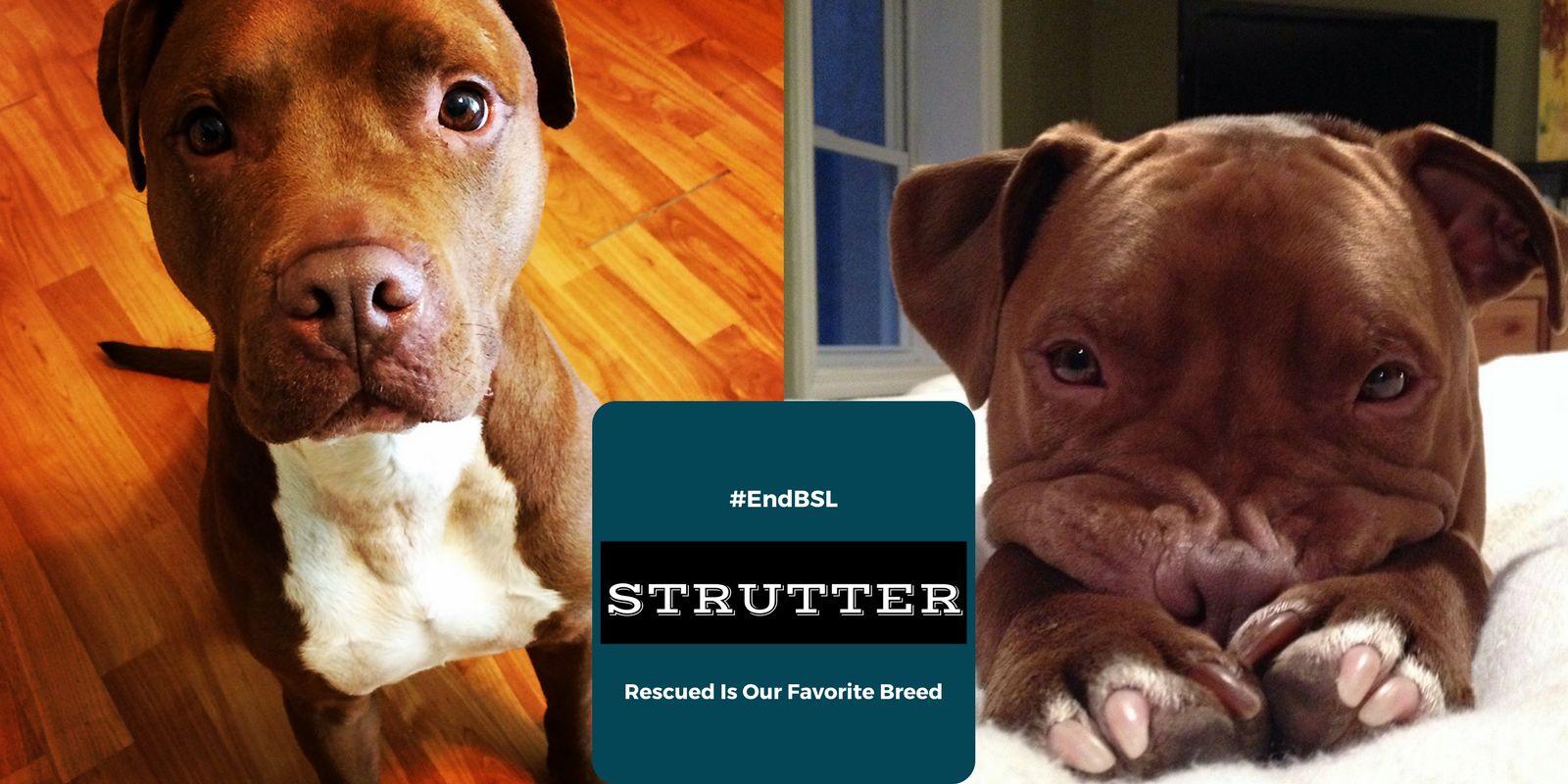 Strutter was recently hit by a car, and is on his road to recovery. Check out his GoFund Me page if you would like to help!
https://www.gofundme.com/strutters-road-to-recovery

Strutter was seized from a property when he was 5 months old. He was being starved – that much Kathleen (Strutter’s mom) knows. He was put in the pound, temperament tested and subsequently rescued by Halfway Hounds. After 2 phone interviews, Kathleen had a meet and greet with Carl (the President of Halfway Hounds). Carl is also an animal behavioralist and trainer. He spent a lot of time with Strutter and considered adopting him himself – because of his attachment and also because they knew Strutter would be an extra challenge to find a home for. 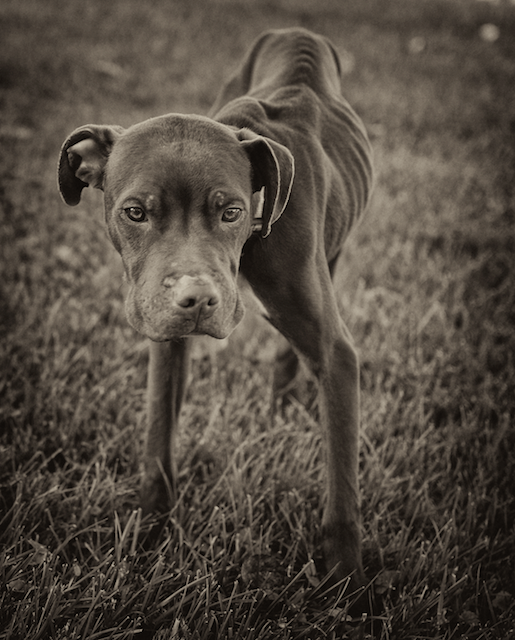 Carl explained to Kathleen for how scared and unsure of himself Strutter was – how he would act and how she should act. She couldn’t help but think to herself, ‘I’m animal person, I got this.’ And when Carl brought him out, Strutter hid behind a chair.  She had never seen a dog like that before. It was heartbreaking. Kathleen left that day thinking, “not that dog.” She had no connection with him. Empathy yes, but that’s it. What she did have was a connection to was Carl. And because of that, she went back. Eventually, Kathleen fostered Strutter for a long weekend, then another, and then a full month. In that time, she realized there was nothing wrong with him at all. He was just afraid. Afraid and sensitive. He obviously went through something really traumatic and it had left him with a lot of wounds. He just needed someone patient and someone who would put the effort in to help him. That someone was Kathleen. Admittedly, she did not realize what a process this would be, but she has no regrets. 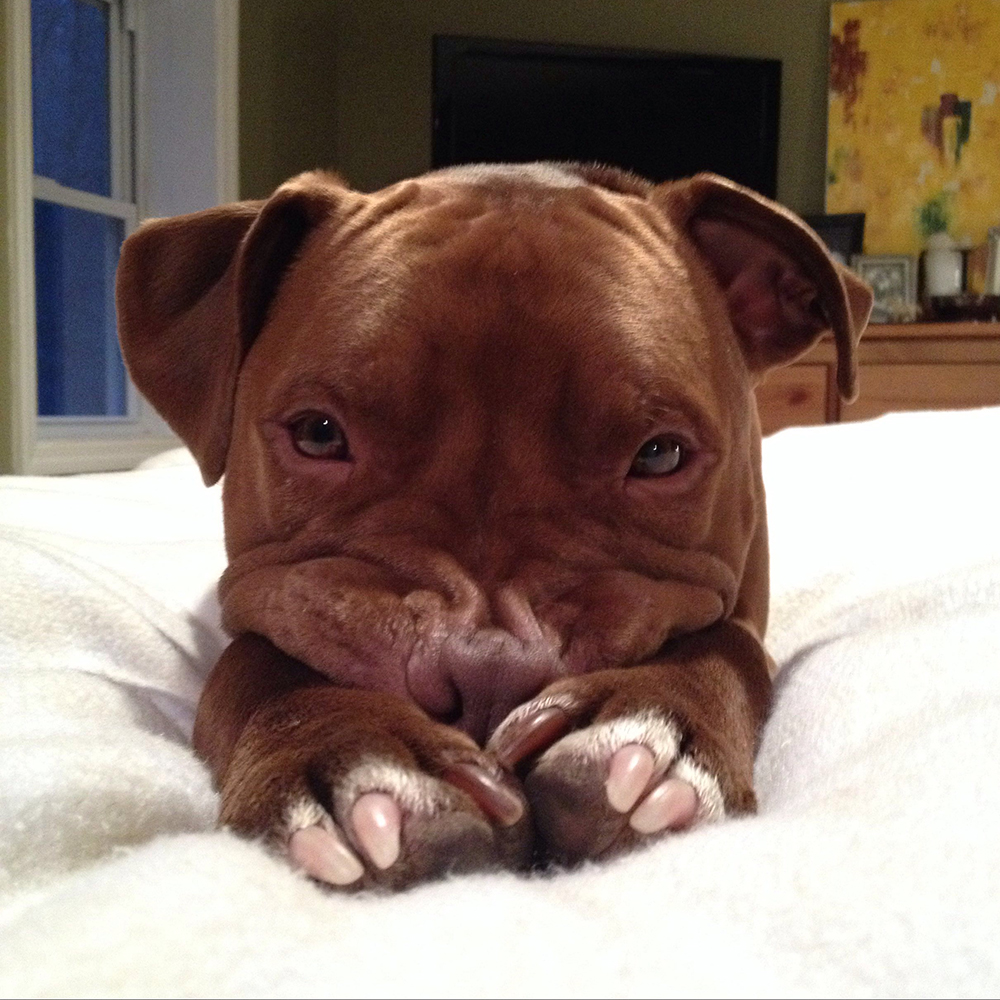 Physically, Strutter’s transformation is complete. Mentally, he is night and day from when Kathleen got him, but he is still very fearful and insecure. He will be a constant work in progress. When a dog is afraid of everything, you don’t quite realize just how all encompassing ‘everything’ is. You really have to start small and focus on just a few things at a time. What Strutter needs, with just about everything, is warm-up time. And not uncommonly, the time he needs is lengthy. Even something that is ‘new’ to him can be something he’s been exposed to twenty times before. 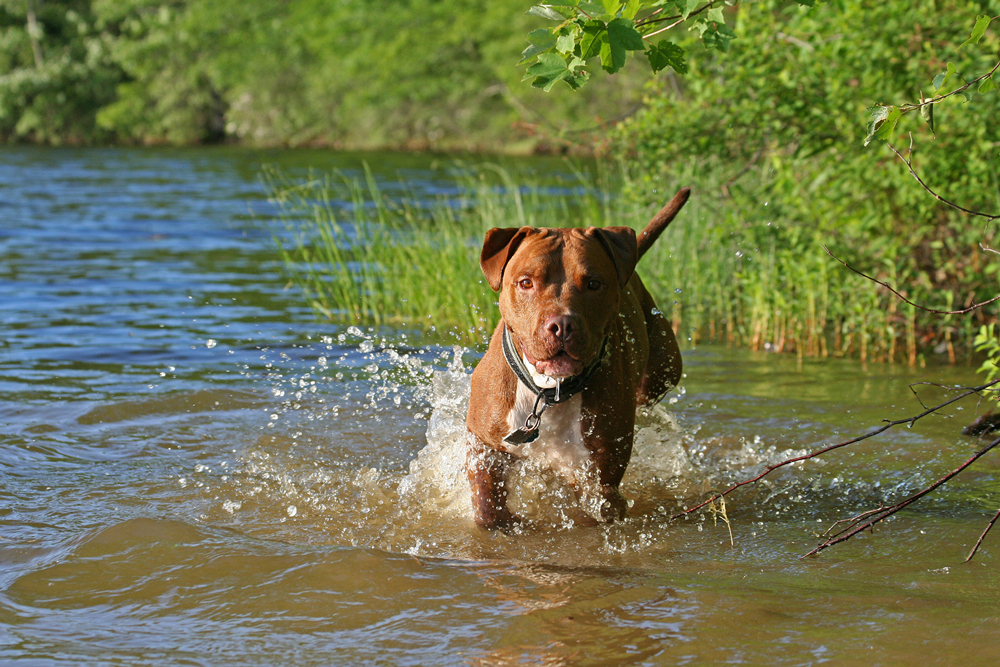 When Kathleen adopted Strutter, his biggest fear was adults – mostly men. Although he still shows this at times, it is nothing like it was. He growled and barked at everyone in the beginning. And we all know what that pittie bark sounds like! Thankfully, she’s very fortunate to have friends and family that are very supportive and understanding. And thankfully, most of her experience with strangers has been positive. Kathleen and Strutter were in a dog hiking group for about a year and a half that proved to be very helpful for his fear of adults, but in the end, the amount of energy from the dogs proved to be too much stimulation for him. He started to have issues with larger groups of dogs and also with some dogs that were his size or larger. Kathleen wasn’t very good at understanding all of his triggers, as this is a process for both of them. She has realized that he just needs warm up time with larger dogs and that time should be one-on-one. There are many cases where him being with another dog makes him feel more secure. 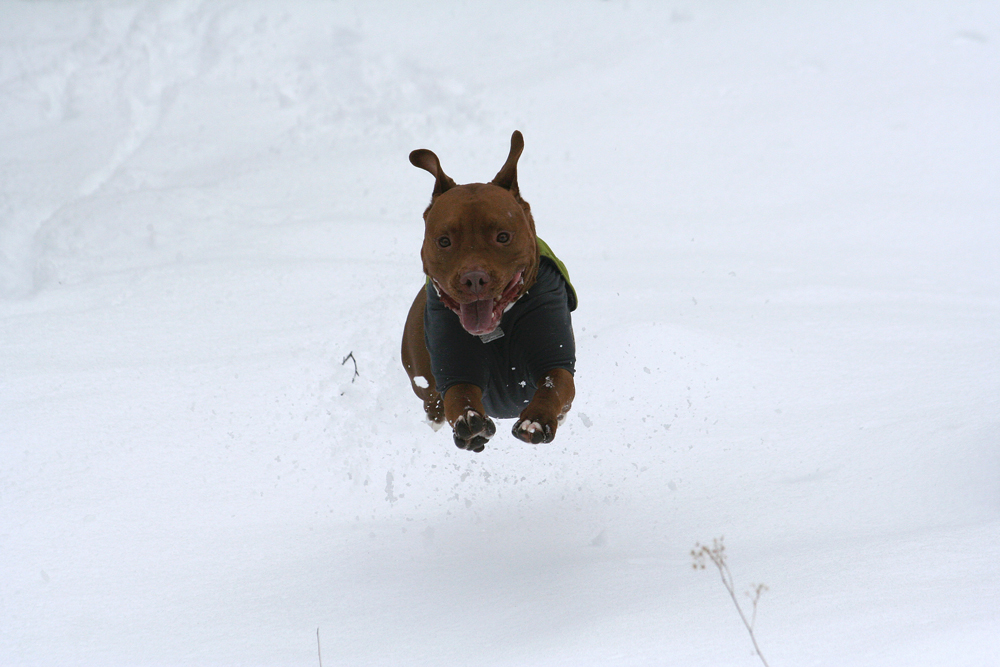 It took Kathleen close to two years to get him out of the car in a parking lot. He still struggles with this. She basically has a 70/30 chance every time. Getting him into the pet store was of course another hurdle. She’s fortunate to live right next to woods and in a generally very outdoorsy area. This is where Kathleen and Strutter spend most of their time. He knows if she goes for her hiking shoes, backpack and/or his harness, they are headed out for some outdoor fun! He rarely will – if ever – hesitate for this! Last summer, they started walking into town together.  The town center is not bustling – ever – which is good because less distraction is better. He was/is definitely stressed out when they do this, but he CAN do it. He never would of gotten out of the car before this. And this too is still a struggle. But he CAN do it. 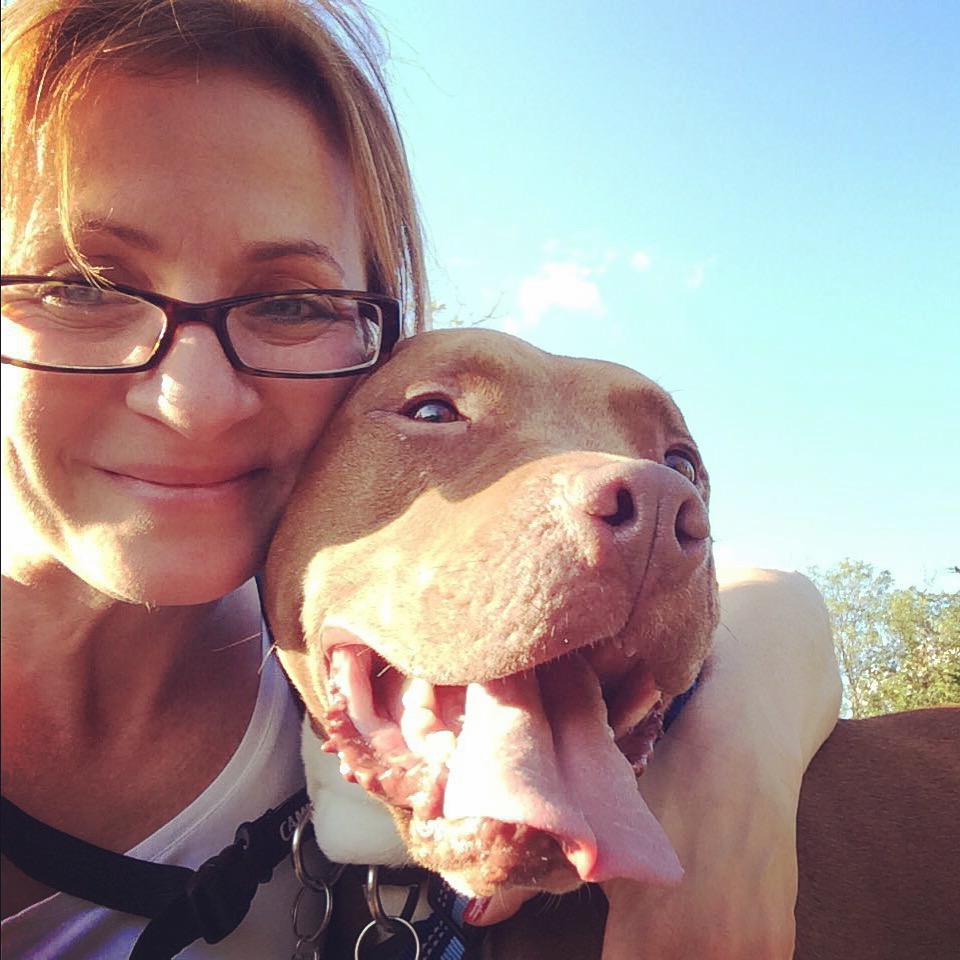 Kathleen is patient, but, as she says, no saint, and Strutter tests her patience often. Occasionally, the stress of having a dog with so many fears and so much insecurity is too much. It makes her sad or frustrated. But when this happens, she just reminds herself of where this boy was three years ago. He has come far, and he will go further – all in due time. Kathleen loves him with every bone in her body and she loves him even more because of all that he is afraid of. 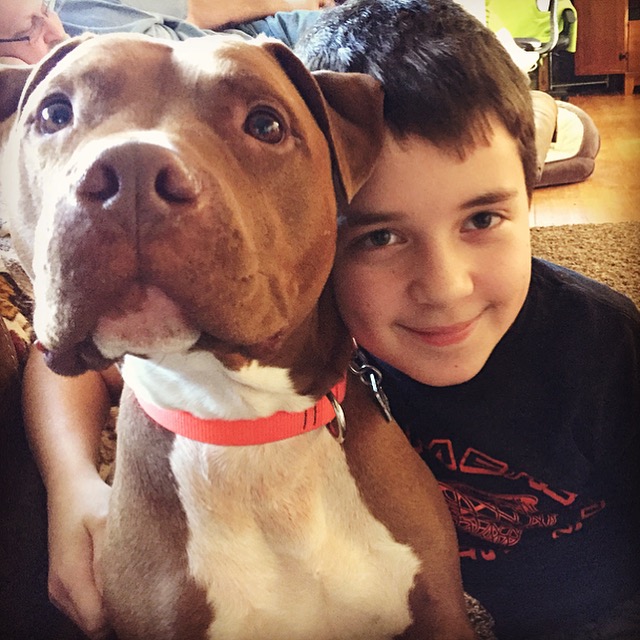 Strutter would like to thank his amazing “Uncle Carl” for never giving up on him, and for his continual guidance and support!