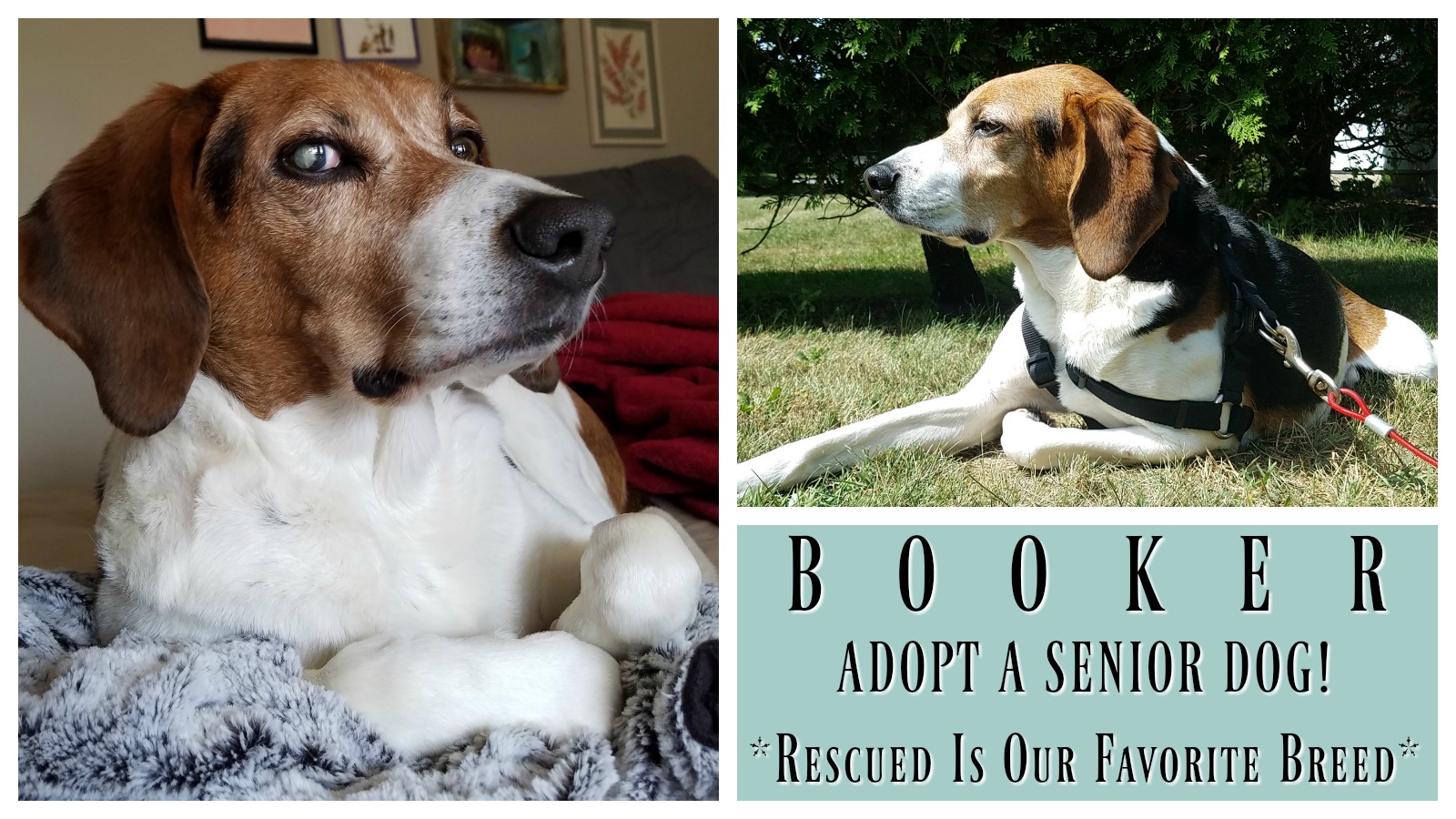 In 2009, Eva began to look into adopting a dog after having to put her golden retriever, Ginger, down due to bone cancer. She started searching local shelters online with no real goal in mind, other than finding a dog that would get along well with cats. This was going to be the first dog that was truly “hers” (all her previous dogs were family dogs). After visiting a few shelters and meeting some pups, she still hadn’t found “the one”… Until she saw a Treeing Walker Coonhound named Buster Brown at a shelter an hour and a half away – the Green Lake Area Animal Shelter. There wasn’t a lot of information about him online, but Eva was hooked. She emailed in an adoption application, packed into her car and began to drive. 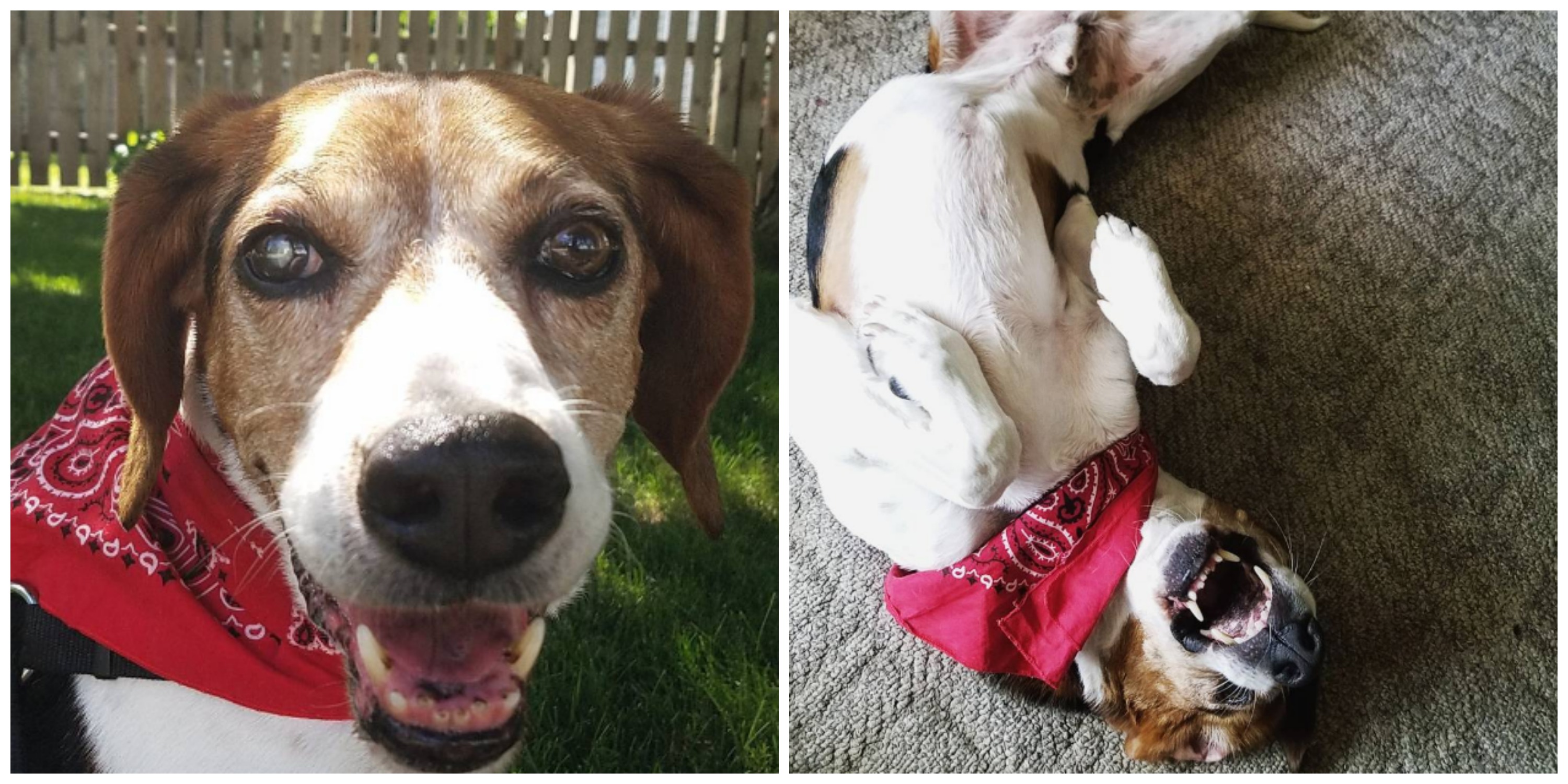 Buster was a sweet, nervous dog. The shelter said he had been found as a stray and that he showed signs of neglect/abuse. His right eye showed signs of damage, though he still had some sight in it at the time. The best guess was that he wasn’t any good as a hunting dog, and had just been dumped in the woods. While Eva was meeting with him and the woman working that day, Buster jumped up and gently placed his paws on the shelter employee’s chest so she could kiss him on the head. She laughed and said, “It’s naughty, but we always let him do this – he’s asking for kisses!” Eva’s heart melted. She ended up adopting him that day, and renamed him Booker. He’s been her best friend ever since.

Due to the neglect, Booker had to undergo a lot of treatments for severe ear infections, and was eventually diagnosed with a mild heart murmur, as well. He was also scared of loud noises, sudden movements, and strange men. Despite all that, he is absolutely the most gentle and sweet dog his forever mom has ever had the pleasure of being around. He doesn’t have a single mean bone in his body. Over the years, his unique personality began to show even more as he began to trust people again. Eva was able to foster other dogs for a few years, and he was an absolute doll with every one of them. He gladly lets puppies crawl all over him and nibble his ears, with only a few grumbles over his nap being interrupted. He even snuggles with cats! 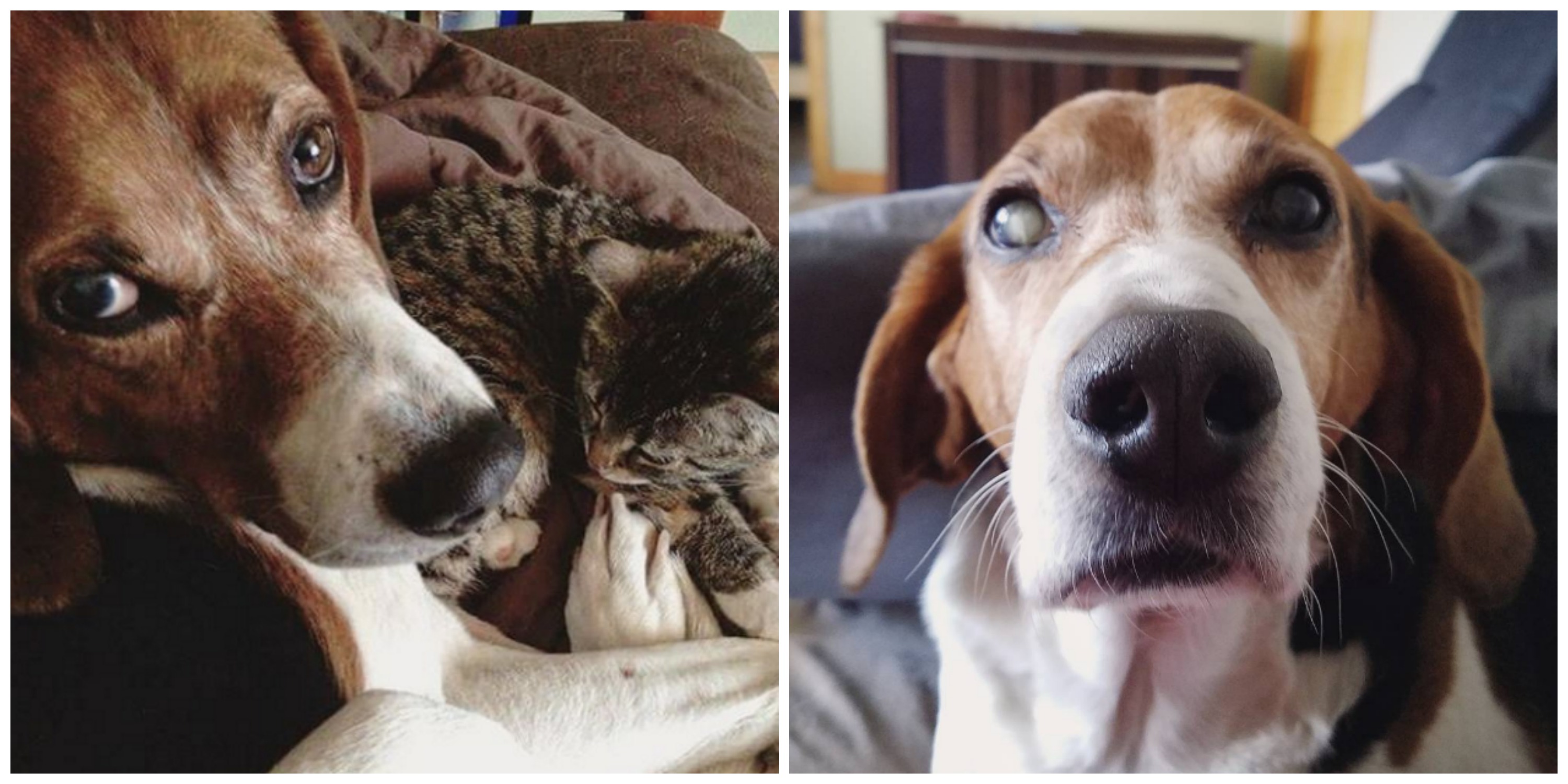 Booker has been at Eva’s side through everything over the past seven years- college, multiple jobs, moving, even a divorce. He’s around 10 years old now, completely blind in his bad eye, and beginning to lose sight in the other. Besides that, he’s a completely healthy, beautiful dog who loves his two to three daily walks – he has a lot of energy for a senior! They often get stopped on their walks by people who want to ask about Booker, and pet him. One of the most common comments they get is, “That’s the biggest beagle I’ve ever seen!” Eva always laughs and explain that he’s actually a Treeing Walker Coonhound…which is basically like a “beagle on stilts”. Booker is always happy for the extra attention and rubs!

Booker is a little too smart for his own good; he’s a big fan of opening cupboards to look for food, and is a master of getting through baby gates so he can find a good couch to sleep on. People often joke that Booker is a “Buddha Dog”, due to his quiet and peaceful nature. Nothing seems to bothers him. His other favorite human is Eva’s live-in boyfriend, Steve, and Booker’s constant animal comrade is a small torbie cat named Ella Fitzgerald (who thinks she is a dog since she was rescued as a kitten and raised alongside Booker). Booker is Eva’s best friend, and she loves him with her whole heart.

#TBT to the best picture I’ve ever taken of Booker… I can’t look at it without laughing. #beautysleep #seniordog #sleepydog #blunderyears #squishyface #throwbackthursday #dogtired #collegedaze