Leslie K sent us this story and beautiful photo of her rescue dog, Gus.

All my pets are from a rescue, she wrote. I’ve found a couple dogs that after not being able to locate an owner I kept so they didn’t end up in a shelter. One of them was an old emaciated, blind and deaf dog who was a wonderful loving pet and was with us for four amazing years. I would not trade that for anything in the world.

While searching for my next beagle I saw this picture of Gus on a rescue site. I absolutely fell head over heels in love with this boy. Little did I know he would become the dog who changed the most out of any I’ve had in more than thirty years. My love affair with beagles started years ago and I’ve had one or a mix of a beagle ever since.

We drove more than five hours from Pennsylvania to Virginia to get him we brought our other dog Candy, a Belgian Malinois, with us to meet him. They really didn’t pay much attention to each other and I felt confident it was a good sign and it was! 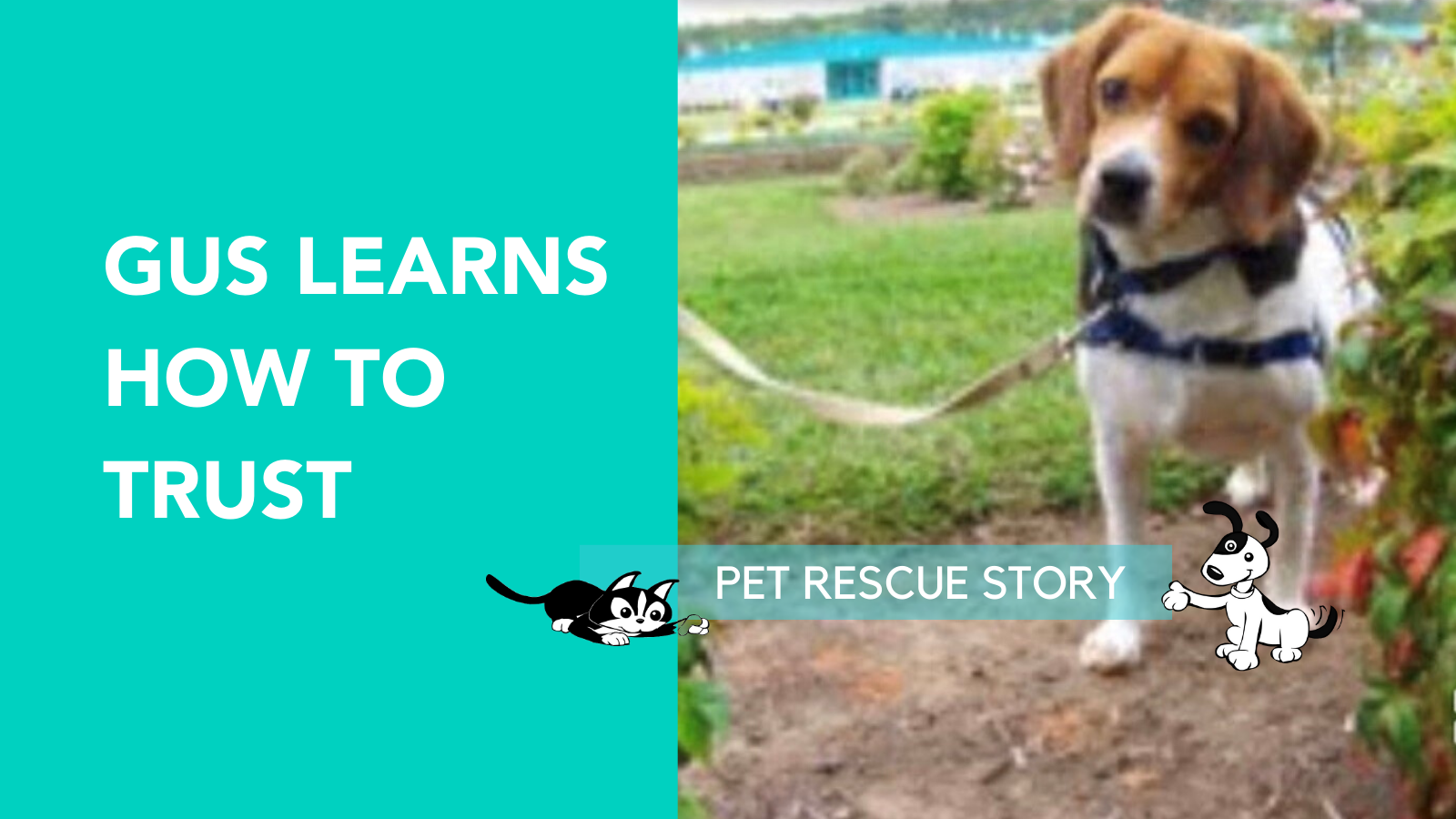 Little did I know that Gus had a fear of humans and did not like to be touched. I would hand feed him every day and talk to him and then I started to massage him and he started to like that after several weeks.

I don’t think he ever lived in a house because he didn’t know how to go up or down steps he was petrified of the ceiling fan. Lucky for us Candy jumped right in and was more than willing to help him learn about steps, being a pet and living in a house. When we got Candy at five-months-old my other beagle, Belle, taught her everything and now she was teaching Gus.

I believe our house was a perfect fit for Gus because it was only my husband and I no children and it was very quiet. I believe this is what he needed to become a confident pet.

It took Gus four years before he walked up to someone to try to get petted. Prior to that, it took him over a year to feel a little bit comfortable with people walking up to him and petting him. I believe he liked getting petted very shortly after moving in but was still afraid of the human touch. So he had to work it out for himself to realize we were not going to hurt him and that petting was a good thing that he liked.

Several years on and Gus still does not like being picked up, hugged, held closely or have humans get real close to him. It breaks my heart to see how beat down this little dog was at the hands of humans. He has made improvements by leaps and bounds and still has more to overcome. We have always worked very hard to make Gus’s life as good as we could in hopes he would come to realize he is safe with us and we would never ever let any harm come to him. All dogs deserve that and nothing less.

When I worked at the headquarters for the Humane Society of US (HSUS) in accounting I was allowed to bring my dog to work with me and I did that with Gus and that really helped him with meeting new people. When someone would come up to pet him I would have him sit and then I gave them a treat to give Gus so he would learn meeting people was a good thing and that these humans were not going to hurt him. It didn’t take him long to realize meeting new people was a very good thing. Now anytime he meets someone he automatically sits and waits for his treat although he doesn’t always get it, he will sit there very patiently.

I am so happy because Gus was given a wonderful opportunity to learn how to be a well-behaved pet. My life would not be the same without him in it. I smile every time I see him so happy and wagging his tail.