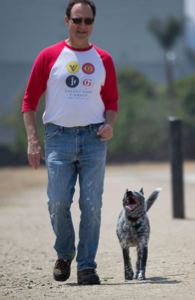 What if we knew our pet’s rescue story before we adopted our furry friend? That was what CUDDLY asked when they sponsored me and ten other bloggers across America to imagine our pets’ rescue stories in the #MyUnspokenPet campaign. If you’re not yet familiar with CUDDLY, they help raise funds and wish list material for animal shelters, foster programs, and rescue organizations. > Click to discover CUDDLY

HOW SPIDER AND I MET – THE TRUE STORY

The truth is that I met Spider on one of my film sets. I make videos with shelter dogs and teach them dog tricks to help them got adopted. For a video telling the true story when we first met, scroll down to the bottom of this page. You can scroll down to see a video of this story.

This is the fictional story of Spider for the two years before we met. Since Spider is an Australian Cattle Dog, imagine him speaking in an Australian accent and using a lot of Aussie slang.

’Tis true blue beauty that my four sisters and bruddahs named me The Runt. Fighting the bigger ones made me tougher and quicker.

We were born on a ranch in a place called California, far far away from Australia. My bigger mates learned to herd sheep and cows. But The Runt never got a fair go. Except once when I leaped out of the puppy pen. That’s when they learned I could jump higher than any of them. 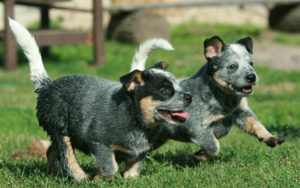 And then, yeah, I rounded up those sheep, barked fiercely, circled around, nipped their heels. Yeah, I was aces annoying. But nipping at those big sheep was aces fun–until one of them kicked me in the head. Crikey, that rang my bell, left a fair dent in my head. It’s not so noticeable now that I’m all grown up, especially since my black eye patch diverts your attention. Dogs notice the dent, and sometimes it scares them off when I angle at them like a drongo dingo.

Getting kicked in the throat made my bark rougher. I’m never gonna howl pretty like my dingo ancestors, but that’s okay because it made my bark sharper and my growl fierce. So, no one’s gonna mess with me. No one. Not even that mongrel who thinks he’s the biggest and baddest. I scared ‘em all off.

Hmmm? Maybe that’s why it took me so long to get a real home.

Yeah, I bounced around a couple of years. The first ones who brought me home didn’t last. They weren’t ready for me. No sheep to herd, so I rounded up their kids. It should have thrilled them, because those ankle biters needed their own ankles nipped.

And that dog run where they kept me outside. Strewth. What a small stuck life, getting a quick G’day when they restocked my bowl. My only break from no hope was barking at everybody and anything that moved.

After too many moon cycles watching my dingo moon god Gidja grow and disappear, I wasn’t a cute puppy. I tried howling, but the humans hated my kicked-in-the-throat singing, hated me.

That’s when I figured it was time to bounce. It took a few days to get good at it, but eventually I jumped up and climbed over that fence, and I was small enough to squeeze through a hole. It’s good being The Runt. 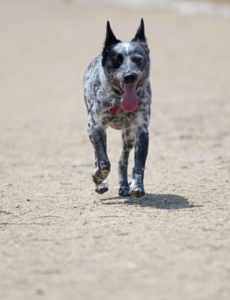 Freedom was fun. I went walkabout. Followed my nose to an alley. Jumped and climbed and squeezed through a crack in a dumpster lid. Yeh, mate, ‘tis good being The Runt.

The whole dumpster was mine. Feast! Just had to scare off some cats. Was tempted to go after them, but I had such a bellyache. Fell asleep instead. Dreamtime. Dreams of my dingo ancestors, dreams of sacred symbols swirled, dreams of herding a mob of sheep.

Suddenly, the dumpster rumbles. I’m awake. I scramble up and poke my head out. My dumpster loads up onto a big big truck. Looks like I’m going on a ride-about. I take in the breeze, scan the world below. Maybe this is what it’s like being a bird. Like Yalungur, the eagle god of my dingo ancestors. Yalungur created his world. I’d like to create my world: a home, yes, with full belly tucker and a soft place to sleep, a home with—what did those humans call it?—ah yes, Love. What would it be like to have Love? Home.

The big big truck drove my dumpster to garbage heaven. I reckon, acres of ripe garbage. But I learned that not all garbage can be eaten. I must be a slow learner, because I got sick every day. Even worse, when you’re sick, you’re weak, which means you’re also prey to the dogs that patrolled the dump.

If I were well, I could’ve fought them off, but it was easier to leg it and climb up to a high hiding place that gave me a good lookout.

In the moons that followed, I silently begged god Gidja for help. I dared not bark because I had to stay hidden while I got well. So Gidja must not have heard my cry. 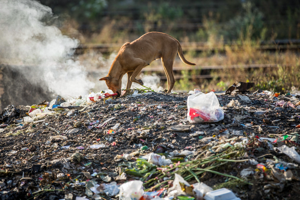 It was lonely, but I got used to my garbage dump lookout. I learned to take risks, and eventually got discovered by those guard dogs. When they brought their humans, I ran away at first. But the truth: I was ready to be captured.

They loaded me into a crate on a truck, slammed the door, drove off. The other dogs and cats in the truck smelled of fear. The fear was contagious. When I get scared, I’ll fight. So by the time we arrived at this giant warehouse, I was in a mood to fight.

SPIDER AT THE DOG POUND

The fight didn’t go well. Those humans gave me a shot. I got woozy, fell asleep, and woke up on a shelf, in a crate surrounded by barking in every direction. Not fun. But at least at night I could bark to Gidja, even though I couldn’t see the moon.

Even though the kind hands fed me, this was no life. I got angrier, barked more. It took me many moons to figure out that barking wouldn’t help me get out. The dogs who got out were friendly when the humans came in. I didn’t really know how to be friendly.

I got adopted a couple of times. But each time I messed something up. I didn’t mean to, but figuring out all these new rules was stressful and confusing. I ripped up food bags, pooped on the rug, chased the cat. Wound up at that warehouse again and again. The third time I got put on a list. They called it the Euthanasia List. I had no idea what that meant, only that the other dogs on that list didn’t come back.

When I got to the top of the Euthanasia List, I got picked. Some folks put me in a van and I wound up at another warehouse, called a shelter. Named Pet Orphans. Still couldn’t see the moon, but humans took me on walks, sat with me, let me play in a yard. I didn’t know how to play at first. They named me Spider. 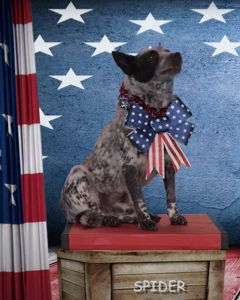 One day they brought me in front of a bunch of people who wanted me to sit still while they shined lights at me and stared at me through this little machine they called a camera. I didn’t like it when they touched me, especially when they put some kind of fandangle ribbon on me and said it was cute. But I tolerated it. The people did the same lights and camera thing with a bunch of other dogs.

The other dogs made the people happy because they smiled and waved, and learned some tricks. I wasn’t having any of that nonsense, especially when they touched me. But all the other dogs got adopted right away. They got homes. I didn’t. That just made me angrier. I was devo depressed.

A whole moon cycle later, that human with the camera started walking me. We walked far, which I was stoked about. He let me climb and jump. Said my name, “Spider,” said nice things, even gave me snacks. I felt happy. We did that together every day for a week. Then something unexpected happened. He brought me home.

That was five years ago. He’s now my dad. And you know what? We love each other. Yeh, love. And I’m his good boy…when I’m not a ratbag. 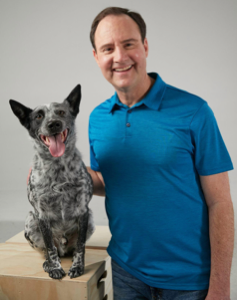 Thanks, Spider, for sharing your story (with help from Larry’s imagination).

Scroll down for two videos:

VIDEO 2: HOW LARRY MET SPIDER: The video below is Larry’s side of that story: