Janet is more challenged by her other two pets: Maude, an African Grey parrot, and Jules, a Yellow-naped Amazon. Maude and Jules are 21 years-old, but they have lived with Janet for only the past two years.

Before that, Maude and Jules belonged to legendary dog trainer, Dawn Sylvia-Stasiewicz, President Obama’s dog trainer for Bo and my co-author on the award-winning book, Training the Best Dog Ever. Dawn passed away suddenly on January 12, 2011. Dawn’s two dogs went to her two adult children and her two birds went to Janet.

When Janet brought the birds to her home she says, “Jules acclimated quickly, in a week or so. She was eating right away, didn’t seem affected by the move. But Maude really worried me. When she got to the house, she stayed at the bottom of the cage. She wouldn’t go up on the perch.” Janet says that Maude wouldn’t eat, so she took the bird to veterinarians to see if there was a health issue and tried different foods. Janet spoke to parrot experts and to Dawn’s daughter, and she researched all she could. From her dog training experience, she figured correctly that Maude was scared being in this strange house without Dawn. 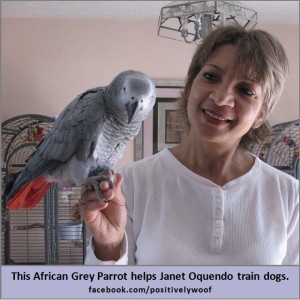 Finally, Janet got a diagnosis: Maude was depressed. A homeopathic veterinarian prescribed a homeopathic remedy and flower essence spray to mix in Maude’s food and spray around her cage.  In a few days, “(Maude) perked up and ate a little. I began to see her do better,” Janet says. “I learned that African Greys are extremely sensitive.”

But Maude wouldn’t speak at all. When Janet had visited Dawn’s home, she remembers Maude as a chatterbox who spoke anytime people came into the room, when the phone rang, or when dogs wandered by. (Dawn boarded and trained dogs in her home, including Bo Obama, each of Senator and Vicki Kennedy’s dogs, and a big Briard that belonged to Sandra Bullock’s mother –all those stories are detailed in our book.) But at Janet’s home, more than three months went by without a sound from Maude.

Meanwhile, Jules was doing great. “Jules wants to be with me all the time,” Janet says. “She climbs up my pants leg and sits on my shoulder. She comes over and nudges me the way dogs do to get attention.”

Then one day, Janet’s phone rang. When she picked it up she heard two voices: one on the phone and another voice coming from the next room that said, “Beep beep. Hello, this is Dawn. I’m unavailable. Leave me a message. Beep beep.” The voice that sounded just like Dawn’s husky alto was Maude. From that moment, Maude began to speak, although rarely when Janet was in the room.

But when any of Janet’s dogs come into the room, Maude would say, “Uh uh. Leave it. Good boy.” (Dog training note: Maude’s praise is automatic; after she says ‘leave it’ she follows up with ‘good boy.’) Maude still mimics Dawn’s voice because that’s what Dawn would say whenever a dog came near Maude’s or Jules’ cage. Now, Maude will go to the edge of her cage and, it seems, will tease the dogs while telling them to leave it (and adding praise). 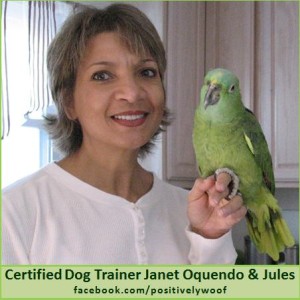 Although Maude still rarely speaks when Janet comes into the room, the bird makes an exception when Janet feeds her. “When I give her something to eat she says, ‘Thank you, mommy, and if  I say Maude give me a kiss she will respond with a long drawn out kiss sound, it’s the cutest thing”

When Janet or her husband come home, Janet says, “As soon as Maude hears us pull our car in the drive I can hear her say ‘beep beep’ mimicking the car alarm. And Jules says, ‘hello hello, who is it’ when we walk inside.”

“They’re a great reminder of Dawn. I remember her voice when I hear Maude,” Janet says, somewhat wistful that she can’t share this joy with her former mentor. “They’re a reminder of what a great job Dawn did with her birds. I try to carry on her legacy.”

Now that Maude is coming around, Janet understands that acclimating a bird isn’t so different than acclimating a dog. “Patience pays,” she says. “You get frustrated because you want to see results now. I want Maude to have the same loving environment that she had with Dawn.”

Janet pays tribute to her late mentor’s legacy. “Dawn’s involvement was more than I can imagine. I miss getting her point of view on the details, her down-to-earth, frank, openness. She loved to share her knowledge and wisdom, and she had the belief that there’s enough business (as a professional trainer) to go around. She was integral part in getting me to where I am as a trainer.”

Janet is also a PositivelyWoof.com featured dog trainer who answers your dog questions on our Facebook page: http://www.facebook.com/PositivelyWoof