Joey Herrick could have retired when he and his business partner, TV star Dick Van Patten, sold their Natural Balance pet food company to Del Monte in 2013. But instead, Joey started a new career: he drives a bus.

Joey Herrick’s bus is mobile spay and neuter clinic that he drives for the Lucy Pet Foundation. “Every week, 80,000 animals are euthanized,” says Joey with the quick energy of a drummer—his first career. “That many animals could fill a football stadium.”

That image of dogs and cats filling a football stadium every day (before being euthanized) inspired Joey to create a TV commercial. His vision will air during Hallmark Channel’s “Kitten Bowl,” broadcast at the same time as the Super Bowl half-time show.  (MORE BELOW)

For film geeks like me, the Lucy Pet Foundation commercial is worth watching over and over. The dogs and cats wear football uniforms (including helmets!), which can take a long time to acclimate. And then there’s the impressive on-field tricks, which I won’t spoil for you. The 30-second TV spot was put together at Stargate Digital in Pasadena, CA (one of my favorite facilities because they’ve helped me on two dog-related film projects)

The animal actors are from shelters and rescue organizations around Southern California. Standing ovation! (You may know that I recently embarked on a year-long project, Dog Rescue Stars, to make short films with shelter dogs at Pet Orphans of Southern California.) 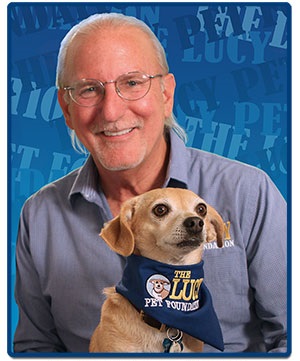 Please help Lucy Pet Foundation spread the word about spaying and neutering. It will save a life…maybe 80,000 lives every week. Besides, as Joey says, “I like driving the bus.” Let’s help keep bus driver Joey Herrick (and homeless animals) off the street.