“I had always wanted to be a writer,” Paula S. Munier author of the newly-released mystery,  “A Borrowing Of Bones and several nonfiction books, said in our recent interview. “I loved being a reporter, but for me ‘real writers’ wrote novels.”

She said, as a kid she loved novels, and even though she has several non fiction books under her belt she didn’t feel like a “real” writer until she’d written A Borrowing Of Bones.” Paula said, “Now I’ve written fiction and in the hierarchy of writing, I think, fiction is the pinnacle. I have the evidence in my hand.”

Of all the genres, why mystery?

“I always loved mysteries, from Nancy Drew to the Bobbsey Twins there always seemed to be mystery novels around our house. When I got a copy of Sherlock Holmes I was hooked forever,” she said.

On her keeper bookshelf is Ellie Griffith, Agatha Christie, Dorothy Sayers, Lee Child and Lisa Gardner. “My favorite book is inevitably the one I have in my hand at the time someone asks me what my favorite book is!”

Author Lee Child reviewed A Borrowing Of Bones and wrote, “a compelling mix of hard edges and easy charm” — “I may have that tattooed somewhere or engraved on my tombstone,” Paula said. 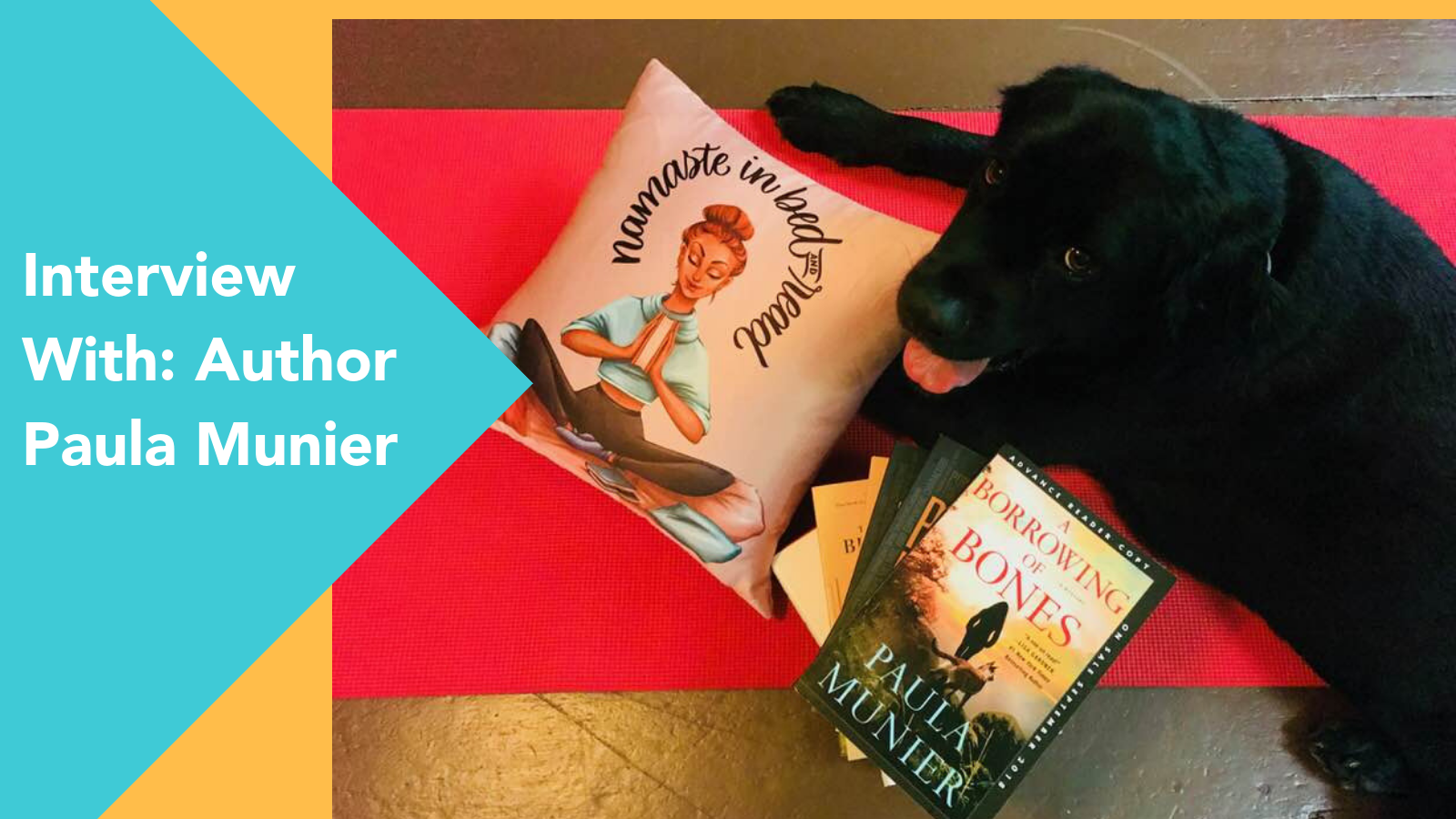 Paula’s rescue dog, Bear, with her newly released book, “A Borrowing Of Bones”

I assume that since dogs (and rescue cats) play a role in the book that you’re an animal lover?

“I didn’t imagine the book would be dog-centric, that took me a while to figure out that dogs were at the center of the mystery. I’d written my dog memoir, Fixing Freddie, and loved writing that. I have always had dogs and cats in my life, but didn’t truly set out to write a dog mystery.”

How did the novel come together?

“I hadn’t set out to write a book. I was writing a chapter for The Writer’s Guide to Beginnings and my agent said, “I like your chapter, you should keep writing.”

From that comment from her agent, Paula said she worked with her characters, the female veteran, Mercy Carr and her Belgian Malinois sniffer dog, Elvis — who were both damaged — to different extents,  by their time in combat.

The chapter she was writing was for a project in which she needed to use that chapter and show several revisions as part of an exercise in beginnings. “I’d just done a fundraiser for working dogs and was inspired by them — that was why I thought it would be fun to write the opening chapter for the book project about them.”

“When I sat down to write the opening chapter of the book, I just kept going,” she said. “It was a fluke but a very happy fluke.”

In the book Paula writes about her other favorite things:

How much research did you have to do?

“I’m an Army brat and have enormous respect for military and the people who serve. In the opening chapter of the book I wanted a character I could fall in love with, a grieving vet and a female character.”

Paula shared she was “born too early” or she would have joined the military. My dad would have wanted me to apply at West Point but it wasn’t accepting women at that time. “The military was a road less traveled for women, then.”

The dog, Elvis, is suffering from PTSD and Paula said she did a lot of research on bomb sniffing dogs, dog handlers, law enforcement, with a man who is a Vermont game warden and with a woman who runs a canine volunteer search and rescue group.

The original fundraiser Paula worked on was for Mission K9 Rescue  a group that rescues bomb sniffer dogs who are sent home and essentially abandoned. If they are Army dogs they are sometimes reunited with their handlers. If, however, they are defense department dogs, they can be abandoned in a shelter.

“It was great fun writing the book and being able to meet all of the individuals and dogs,” she said.

Writers are typically told to “write what they know” and Paula certainly did.

“A Borrowing Of Bones is the type of mystery that I love to read. I also love Vermont, cats, dogs, veterinarians and veterans. I put everything into the book that I loved,” she shared.

Paula shared she had conversations with people in Vermont, and traveled there as well — it is one of my favorite places to visit. “I spent time talking with dog trainers, game wardens, explosive experts, active and retired military and former law enforcement,” she said. Meeting dogs and their handlers helped get a feel for the job these dogs do and for the bond they have with their handlers.”

I also read anything and everything I could about working dogs and dog handlers, from Roger Guay and Kate Flora’s A Good Man With a Dog(a memoir about Roger’s time as a game warden in Maine and the dogs he trained to help him do his work) to Sergeant Rex, which is a true story about an amazing sniffer dog.

“I love words and Shakespeare’s words still hold up. I also like a mystery that is reminiscent of British mysteries like the clues you find in Colin Dexter (creator of Inspector Morse),” she said. “I threw in everything I loved about mysteries and wrote a book for myself thinking that it would be fun — and it was!”

Paula said she believes that because she had so much fun writing the book that readers will have fun reading it.

Editor’s Note: When you read the book you will fall in love with the contradictions that make up Mercy Carr’s character — Shakespeare being one of them!

The game warden’s dog in the book is inspired by Paula’s own rescue Newfoundland mix, Bear.

In case you missed the review of A Borrowing Of Bones.

Up next: Read Bear’s rescue story and how Paula worked him into her book, A Borrowing Of Bones.