Tina’s first family purchased her from a breeder, but they did not realize that adding a puppy to their household would be such a big commitment.  They were not fully prepared to take care of a puppy, and after eight months, they aske 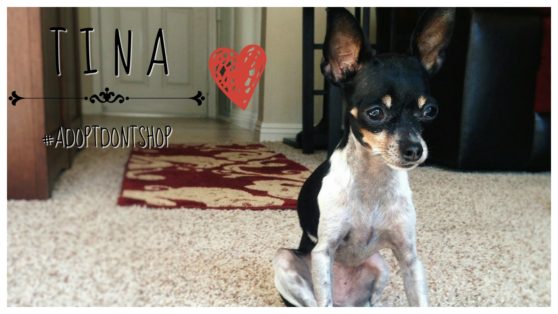 d Julia, a family friend, to take Tina in. Thankfully, Julia welcomed Tina in to her home and gave her a stable, loving environment to grow up in!

In her first home, Tina was left alone with a toddler a lot, and because of this, she became terrified of people – especially children. She wouldn’t let humans pet her, and would bite out of fear.   Tina was also left alone in one small section of the house for long periods of time, so she lacked the proper socialization during her first eight months.  It took a while to adjust, but Tina has become more and more confident around humans. She still gives a warning growl at times, but Julia knows how to calm Tina down before she gets too scared.

Julia has been Tina’s best friend and protector for almost 9 years, and she truly believes they found each other for a reason. Tina has helped her mom fight depression everyday, and Julia has kept Tina safe.  They will forever be thankful for each other!

Follow Tiny Tina on Instagram @tinatheterrible (Don’t worry –  it’s  a joke referring to the Kings, such as “Ivan the terrible,” because Tina is a Queen!)

never has a photo ever represented me so well???? thanks mom for making this on snapchat! (by the way, this is my begging face..give me pasta human!!)