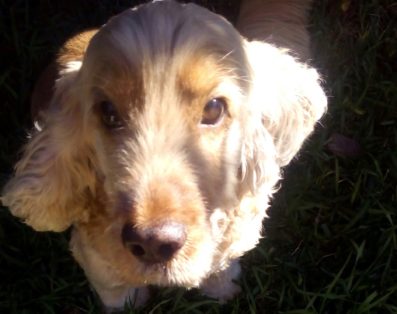 Tyler, a Cocker Spaniel, was born to a dog breeder in Australia. Because he was so small compared to the other puppies, he was always last to get to the food bowl, and soon became the runt of the litter. Tyler was the only puppy from his litter that wasn’t sold, and was seemingly neglected while growing up at the breeder’s house.

Hollie had just moved to Australia, and recently lost her last fur baby, also a Cocker Spaniel.  She wanted another dog, so she visited the same breeder that had Tyler.  As soon as she saw Tyler, she knew she had to help him!  She spotted him lying in the corner, hiding behind a dog house. His fur was scraggly and he was very thin.  He was the only adult dog in the room, and his eyes were full of sadness. Despite being surrounded by a litter of happy, healthy, jumping puppies, Hollie knew she had to give Tyler his forever home.  Hollie offered to pay for Tyler, but the breeder refused to take any money, so Hollie adopted him!

Though Hollie didn’t find Tyler at a shelter, she DID rescue him from a life of hunger and sadness.  In turn, Tyler rescued Hollie. Tyler made her feel at home in her new country and because of him, she had something to wake up for everyday.  After five years in his forever home, Tyler is still the center of Hollie’s world.  She can’t imagine what life would be like without him.