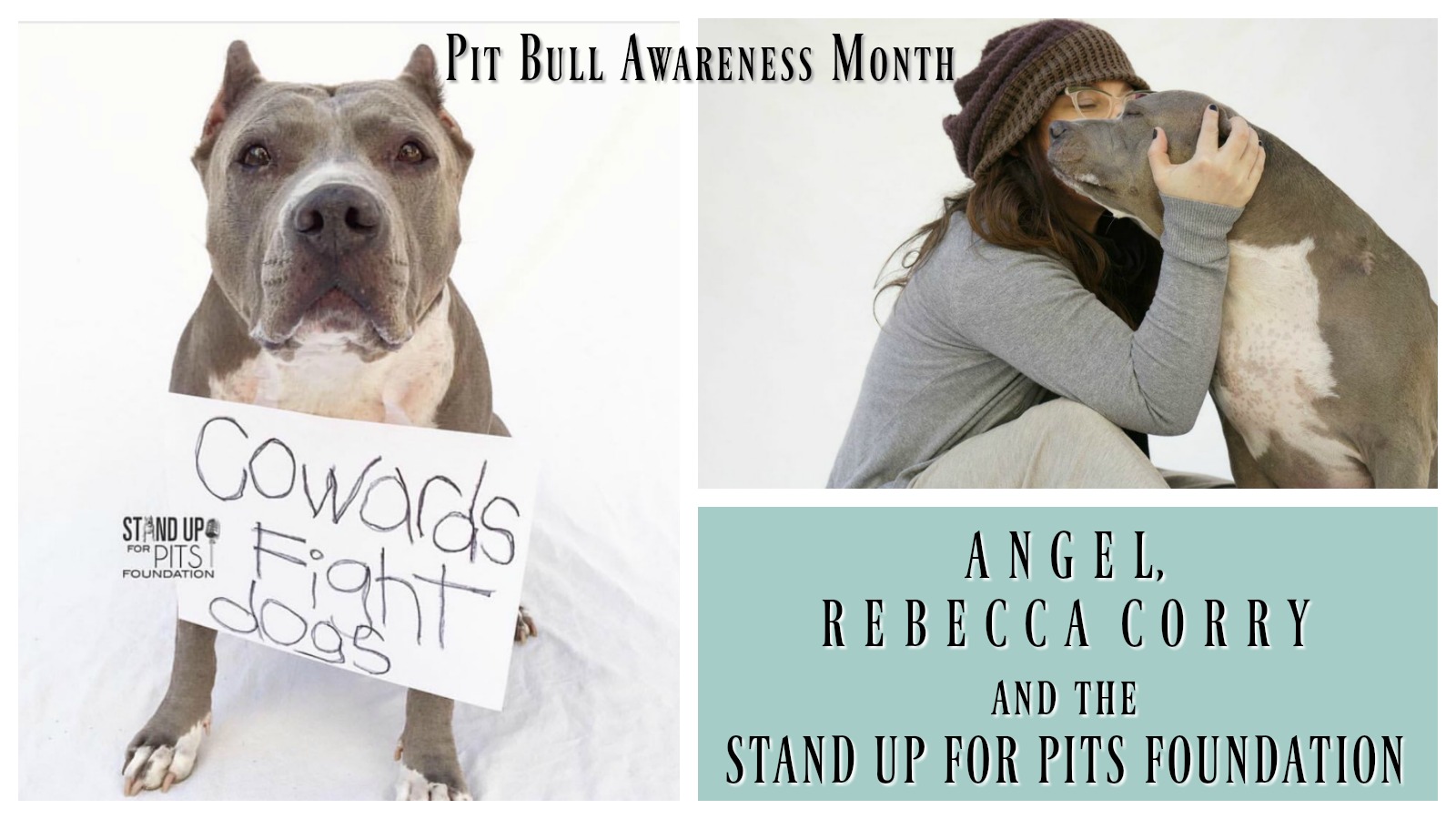 Rebecca Corry’s life was changed when she adopted her Pit Bull, Angel, in 2008.  Angel’s story is a far too common one. She was abused, bred, and thrown away.  You can read Angel’s full rescue and adoption story on the Stand Up for Pits website, but an excerpt describes the rescue of an innocent dog who survived abuse and neglect:

“Angel was found on June 16th, 2007 running down the street in South Central Los Angeles with a male dog who had severe injures.  Animal control was called regarding the male dog, but Angel was found with him, so they picked them both up.  The male died from his injuries at the shelter. Angel’s ears had been horribly home cropped (cropping of ANY kind is NOT okay), chemical burns all over her back, and her tail appeared to have been previously broken, had been overbred, was filthy, and had puncture wounds all over her body, most likely from being a bait dog.” 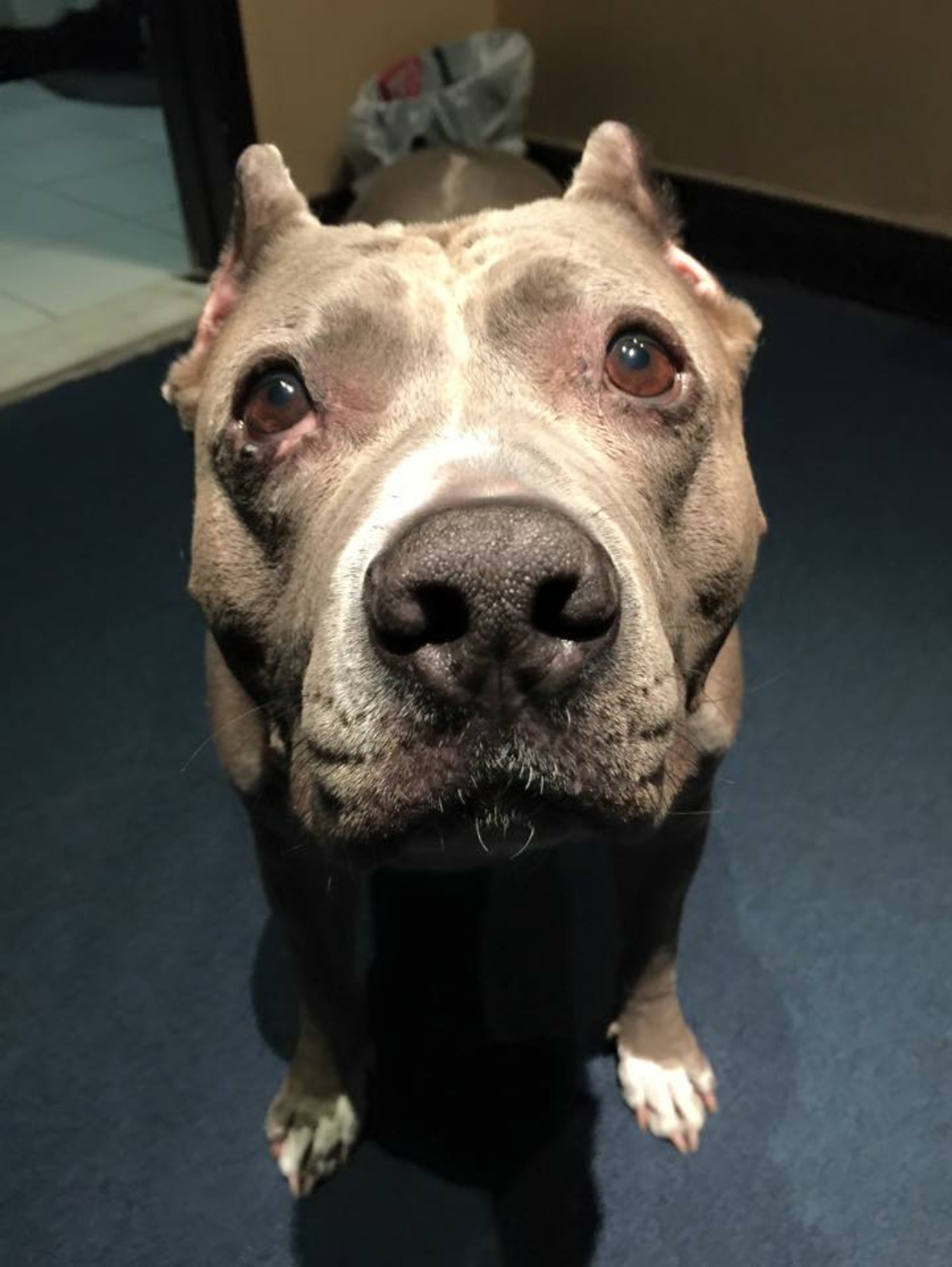 Angel inspired her actress/comedian mom to found the Stand Up For Pits Foundation, and since her adoption, they both have worked tirelessly to raise money and awareness for Pit Bulls and other dogs in need.  Rebecca says:

“Angel inspired, and continues to inspire all I do, and my foundation. After adopting Angel, I learned immediately what these poor dogs were up against.  To have that knowledge and do nothing is not, and will never be an option for me.  I decided to use my art for good. These events are extremely hard to produce.  They don’t just ‘come together’.  They require an enormous amount of work from beginning to end, and after.  They are always worth it.” 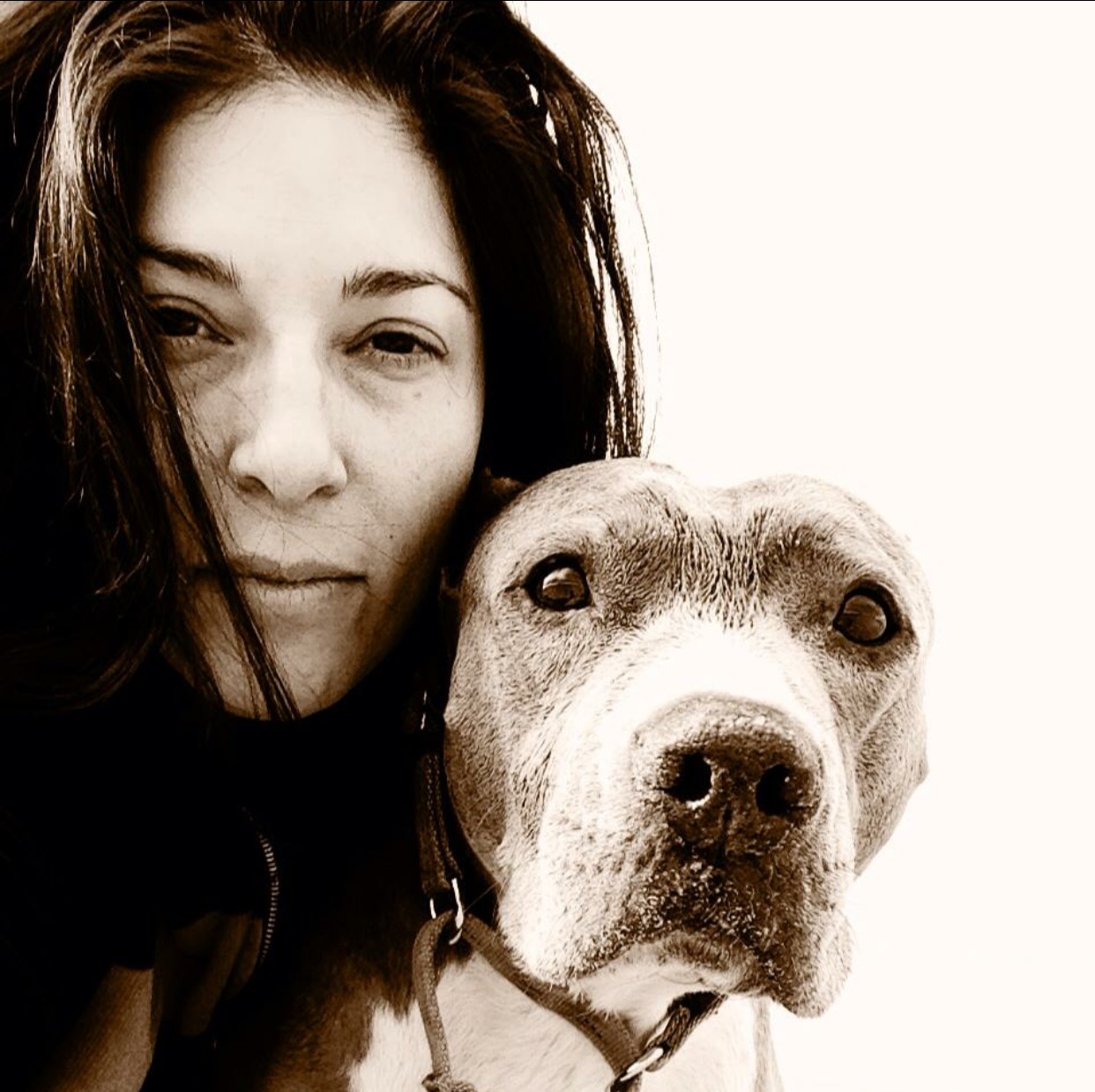 On May 10th, 2014, thousands of people and dogs gathered on the lawn of the U.S. Capitol for the One Million Pibble March. Rebecca tells us about that historic day:

“Angel and all like her inspired the Pibble March.  I donated and dedicated over a year of my life organizing it because the abuse and discrimination of Pit Bull type dogs needs to end.  People who love them need to be heard and I wanted to provide that to the people on a national level.  Pit Bull type dogs need to be treated as individuals, and being wiped off the face of the earth, force fought, abused, discriminated against and thrown away is not okay.  It has gone on long enough and these are lives and every single one of them matters.  Dogs are gifts to be respected and protected.  I started my foundation, marched on Washington and continue the work because of what Angel taught me.  I’m sickened by my own species and I will fight for these innocent, voiceless dogs as long as I’m on the planet.  The Pibble March was, and always will remain the most important day in my life, and the thousands who attended feel the same way.  It was powerful to stand with so many and be the voice for our dogs.  We are sick and tired of the fear based ignorance and needless murder of our family members and that day, we made it known, and continue to do so.  We made history that day, and that day, I was proud of my kind.” 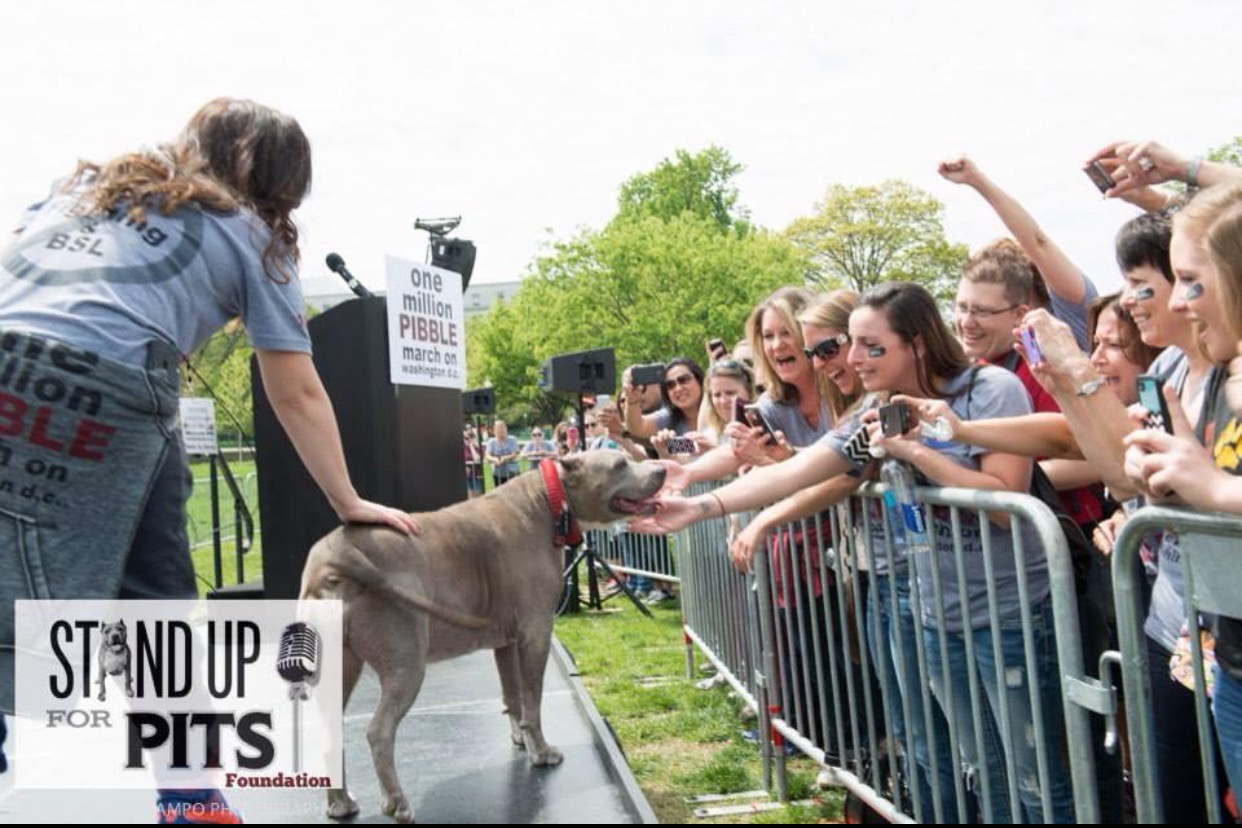 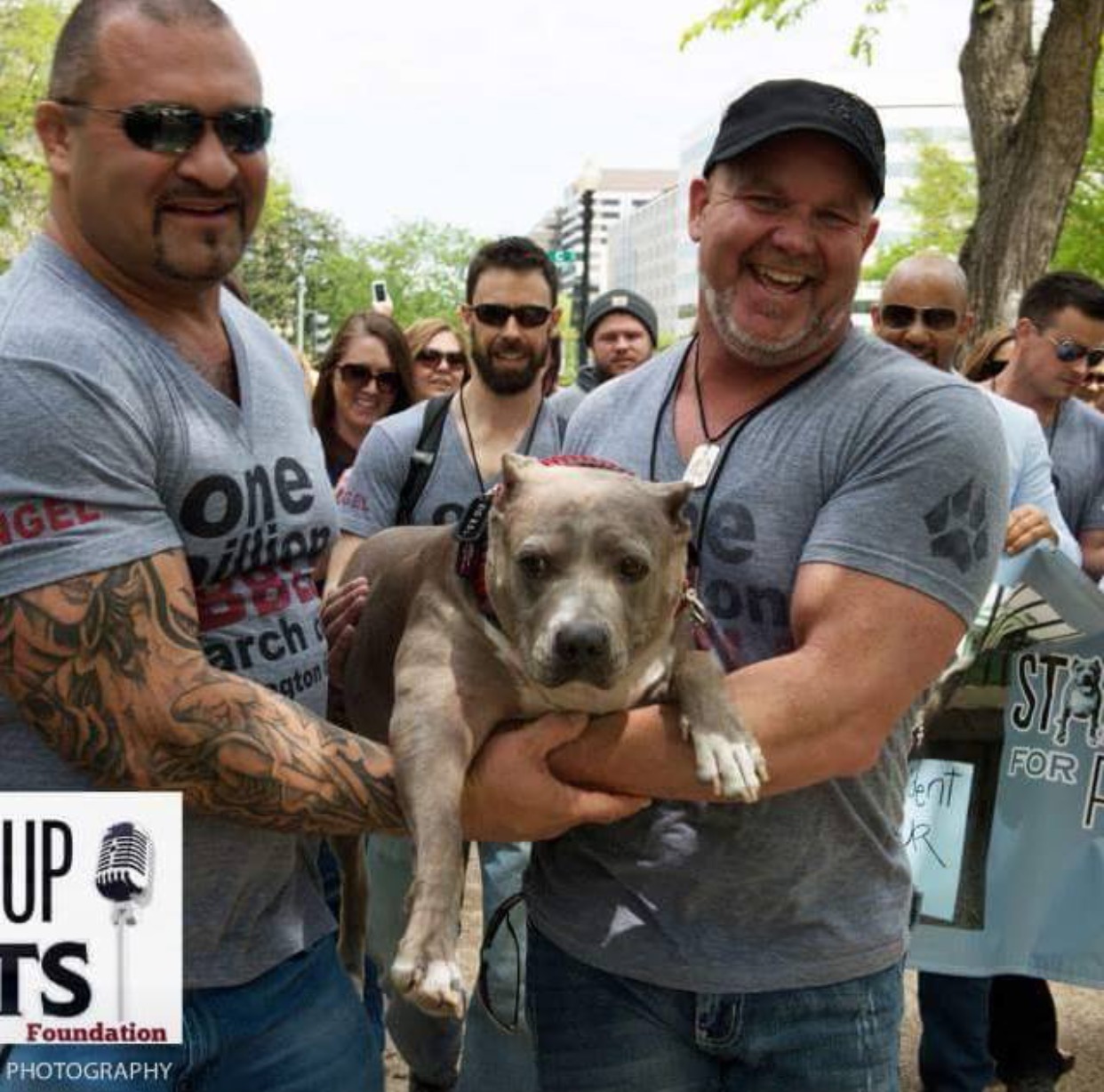 Rebecca addressing the crowd that gathered on the lawn of the U.S. Capitol 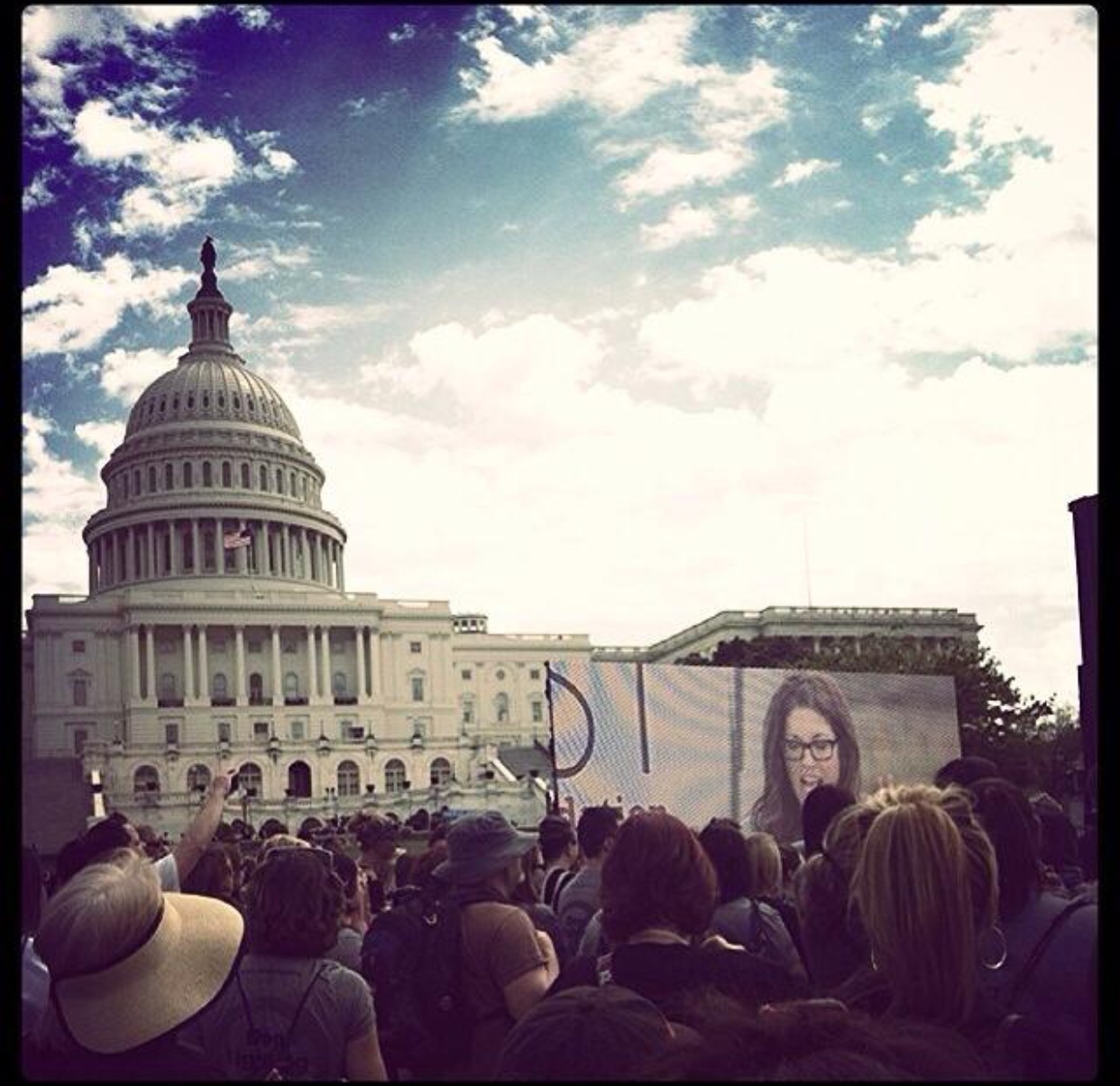 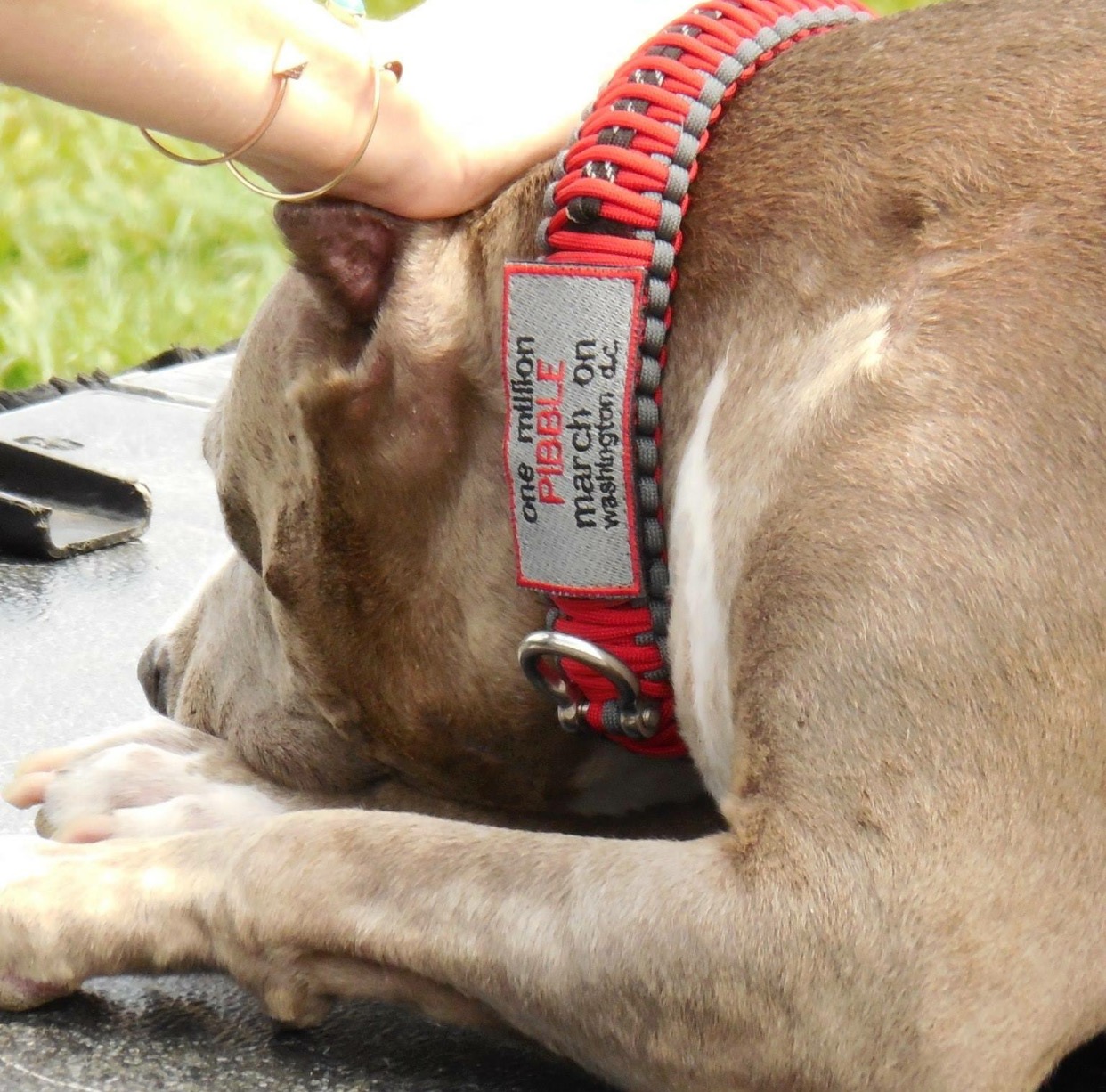 Every year, Rebecca hosts Stand Up For Pits fundraisers in numerous cities across the country, where Rebecca, celebrity dog lovers, and other rescue and adoption advocates come together to laugh and raise money and awareness for Pit Bulls.  The event includes a pibble adoption, a SUFP donation drive, a silent auction, and a stand-up show, featuring top comedians, including Rebecca herself.  Some of the past performers include Adam Sandler, Rosie O’Donnell, Moshe Kasher, Kaley Cuoco, Whitney Cummings, David Spade, Jeff Garlin, Tig Notaro, Janeane Garofalo, Bill Burr and David Koechner, among others. Rebecca told us what to look forward to at the 2016 Hollywood SUFP event taking place at The Improv on Saturday, November 5th:

“Stand Up For Pits events have been selling out nationwide for 6 years now. We don’t have publicists or a huge company (like Live Nation) behind us. We don’t have sponsors or money behind us.  It is simply word of mouth and the passion for our dogs and need for change is what gets people to these events.  We are a small foundation, but we are a powerful one because we have the best supporters on the Earth.  These people are doers, they work extremely hard, and that is what it takes.  At the Hollywood event, you can expect what Stand Up for Pits has:  a great show, great event, and great people standing together to help end abuse, discrimination, and save lives.” 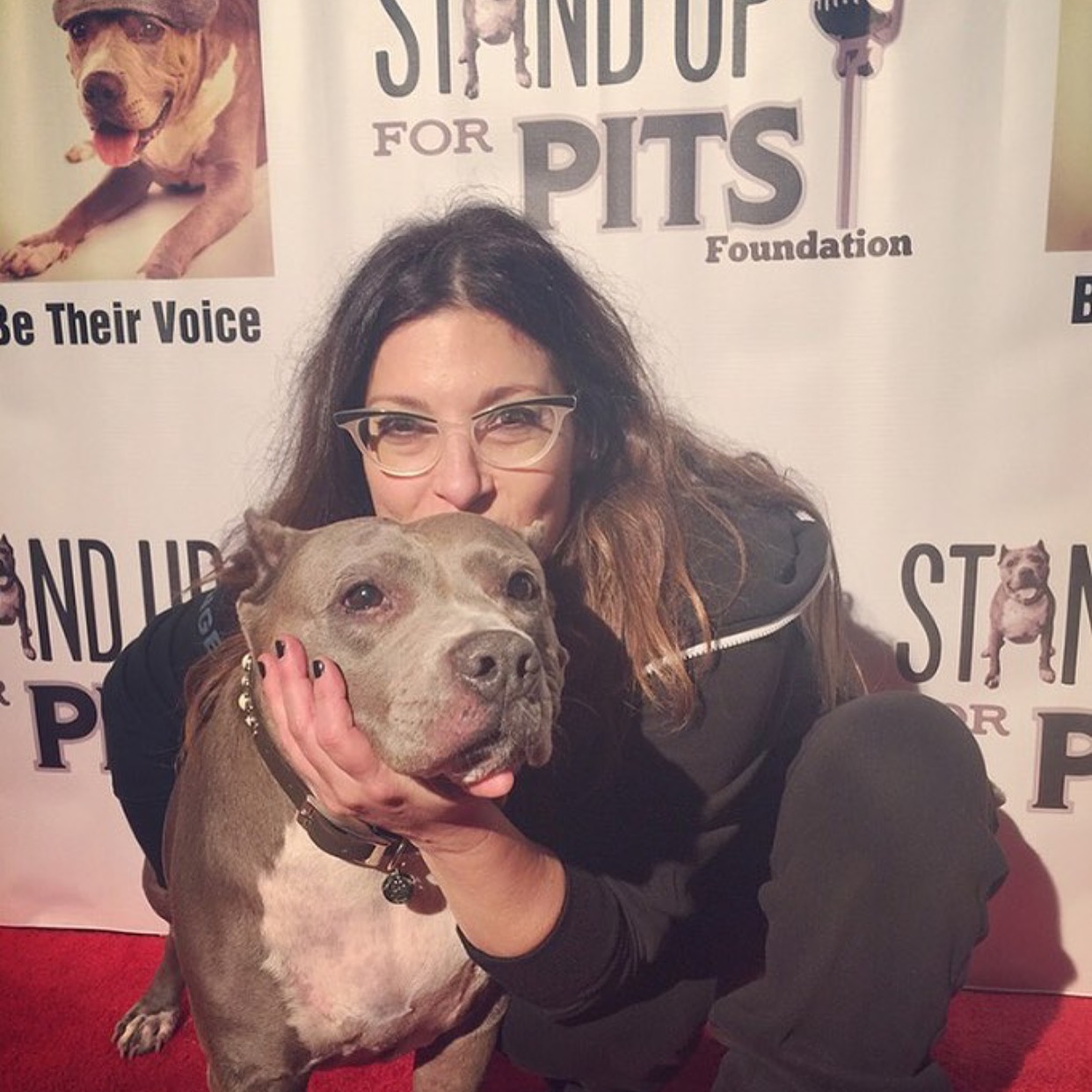 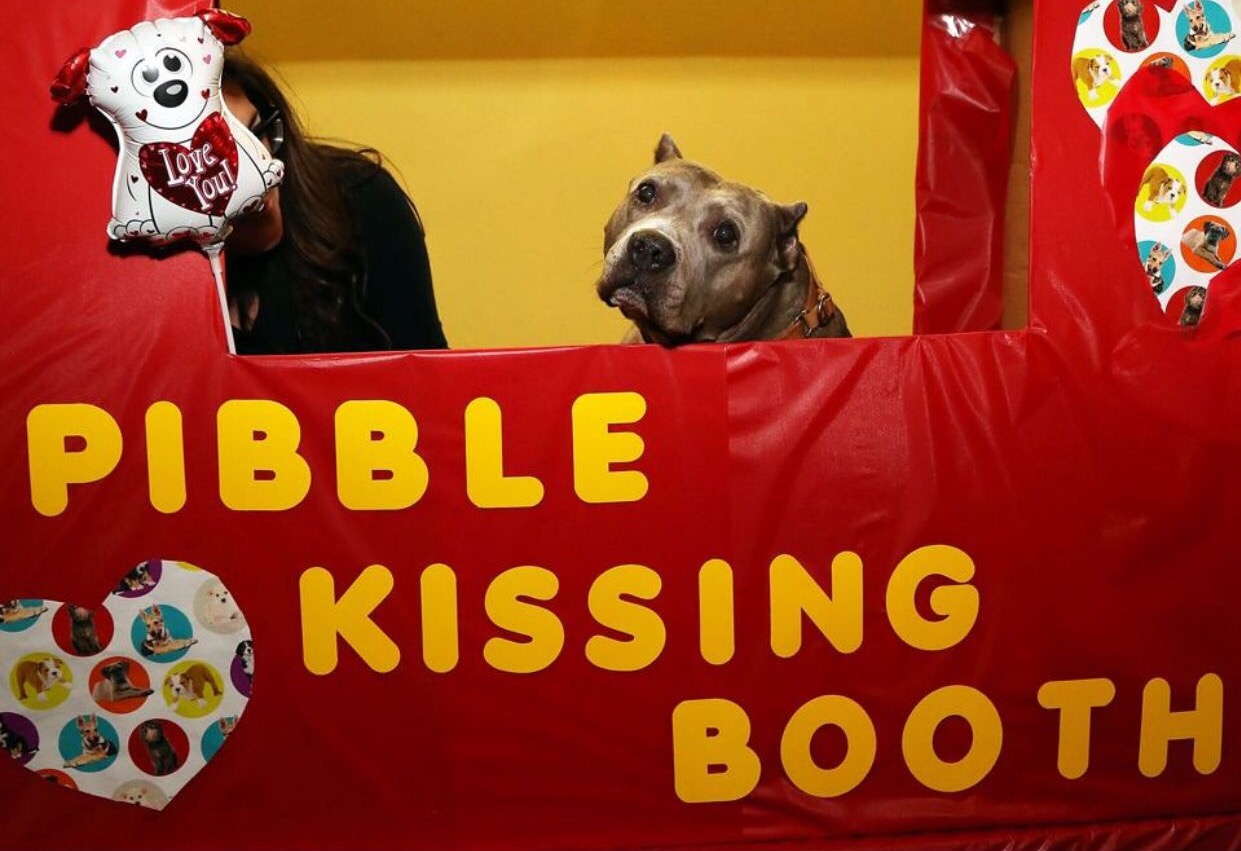 Earlier this year, Rebecca announced that she would be giving $10,000 in ANGEL grants to ten non-profit rescues.  She told us that even though SUFP is an extremely small foundation, when they are able to, they give back thousands in grants to help other group missions, dogs and individuals.  People apply, and SUFP does what they can.  She also added that if they had millions, like Best Friends Animal Society, they could change the world, but they don’t, so they do what they can and they do a lot.  Rebecca is extremely proud of all that they do. 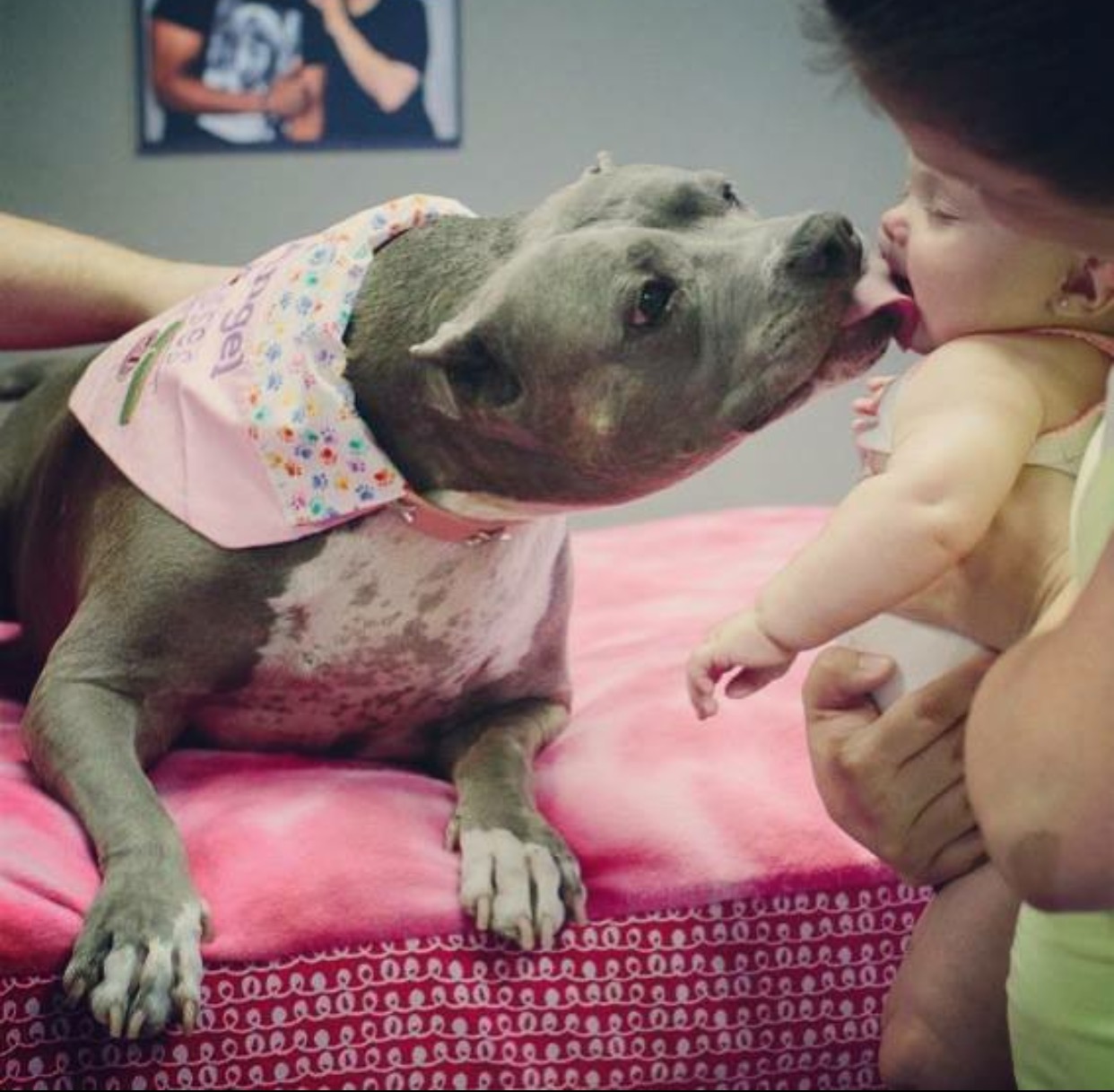 Throughout the year, Rebecca and SUFP help rescue groups, individuals, and non-profits all over the country.  Rebecca tells us about some difficulties she faces when working in the animal community, and why she is so particular about who she chooses to work with and support:

“We help groups all over the country.  Sadly, my experience with many has been anything but positive.  B.S. drama and inner fighting is a constant in the animal community.  Groups pulling dogs with no long term plans or funds to back it up  — this happens all the time. We’ve seen dogs disappear who we’ve helped and groups were not held accountable. We’ve heard of groups pulling dogs from shelters, getting donations for them, and then dumping the dogs in other city shelters around the country.  You name it, we’ve heard it. So, I am very particular about who we support and work with.  The groups we invite to participate at our events are asked to post the event a minimum of 2 times per week on their social media and are expected to work hard at their silent auctions.  SUFP events provide exposure, help with placing their dogs and an opportunity for them to raise a lot of money in one night.  They can raise between $2,000-$10,000.  It all depends on how hard they choose to work and how much they care.  Bully Paws, Forgotten Dogs Rescue, Sean Casey Animal Rescue, BARCS, Utah Faces, SLC Pit Crew, Orange County Pit Bull Rescue, LoveLeo Animal Rescue, Players for Pits, and Pit Sisters are just a few groups we like and work with, but there are many more we have worked with and continue to help.” 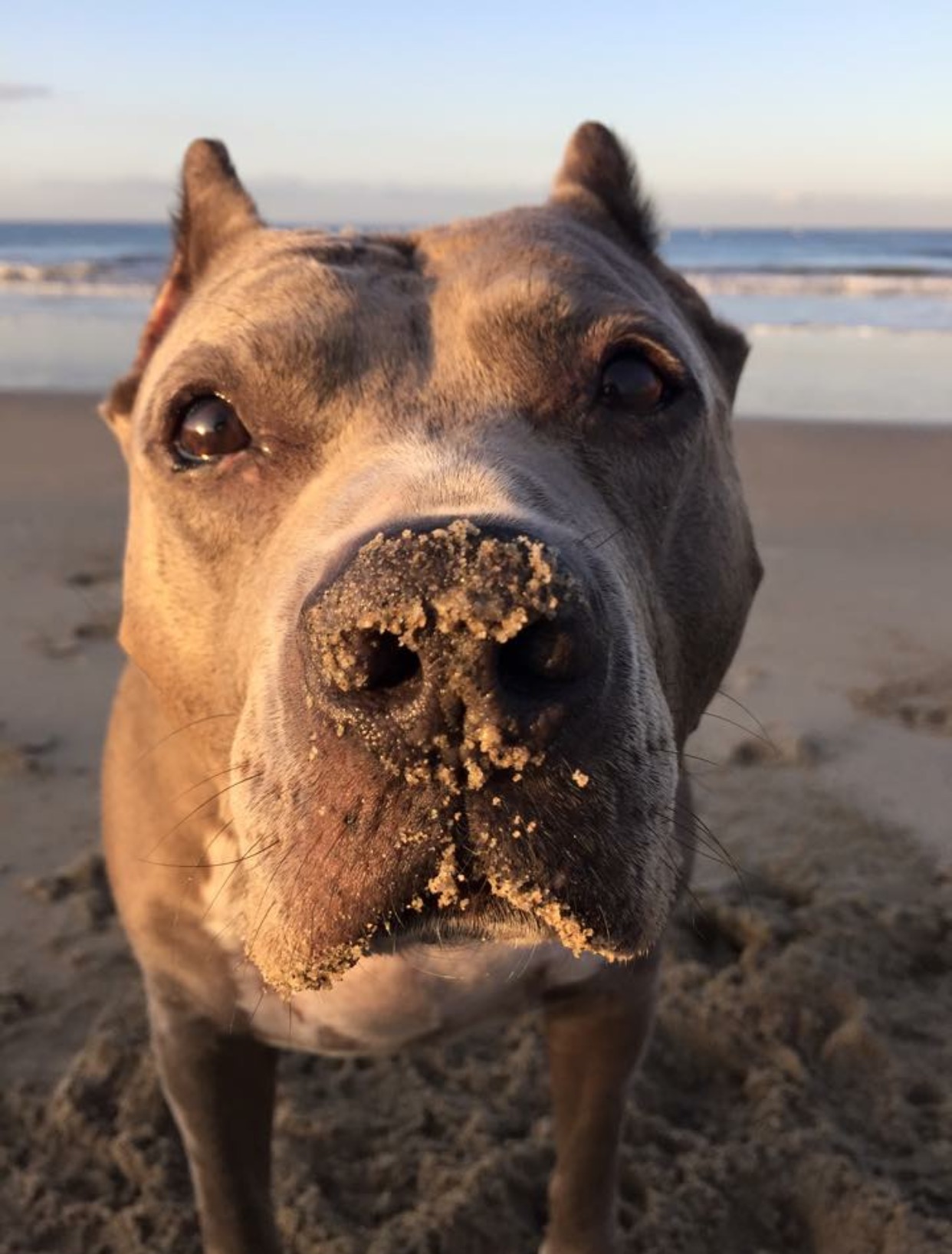 Over the years, Rebecca has directly or indirectly helped rescue countless Pit Bulls. When asked if any of the lives she’s saved have touched her more than others, she says:

“Every single one of them matters.  Every single life is as important as the next.  I love and respect them all.  Dogs like Khaleesi, and Lucille, are soul crushing to me.  The cruelty and violence human beings inflict on these dogs physically sickens me.  A fit punishment for humans who abuse and murder our dogs would be to be dragged behind a truck through city streets.  They don’t deserve to walk among us and our society’s apathetic attitude towards cowardly dogfighters and abusers says everything about us as a society.  So, to answer your questions, they all matter and they all touch me.  From the starved, beaten, and burned dogs, to the dogfighting victims, the overbred and the millions of lives killed in the shelter system.  They are all special, they have all touched me and they all deserved better. 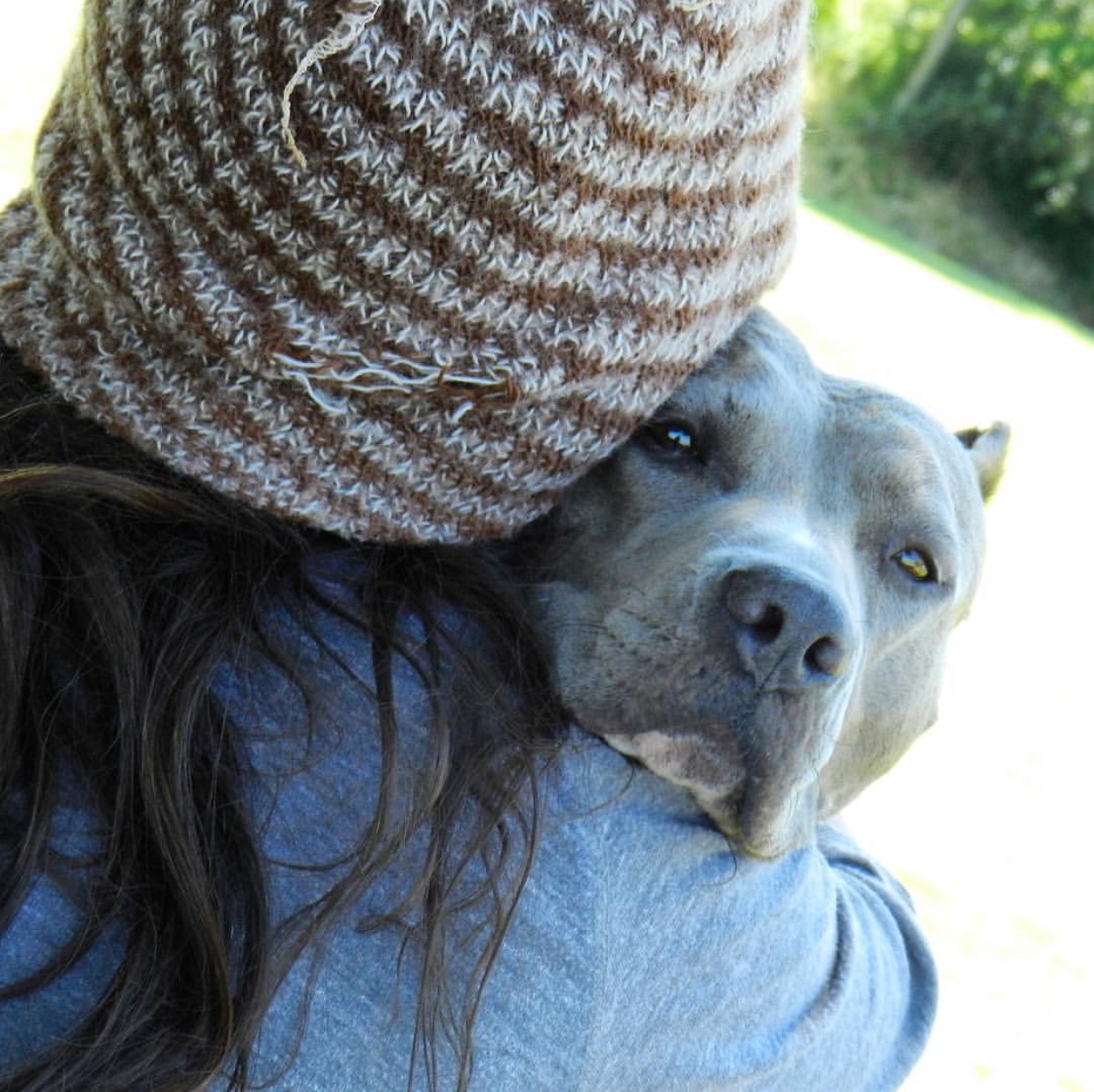 Sadly, Angel, whom Rebecca names as the “true founder of Stand Up for Pits” passed away earlier this year. Because of her, countless lives were saved.  She was so strong and so full of love, and was the perfect ambassador for her Pit Bull brothers and sisters. Angel continues to inspire people to speak up and raise awareness for abused and misunderstood Pit Bulls everywhere. 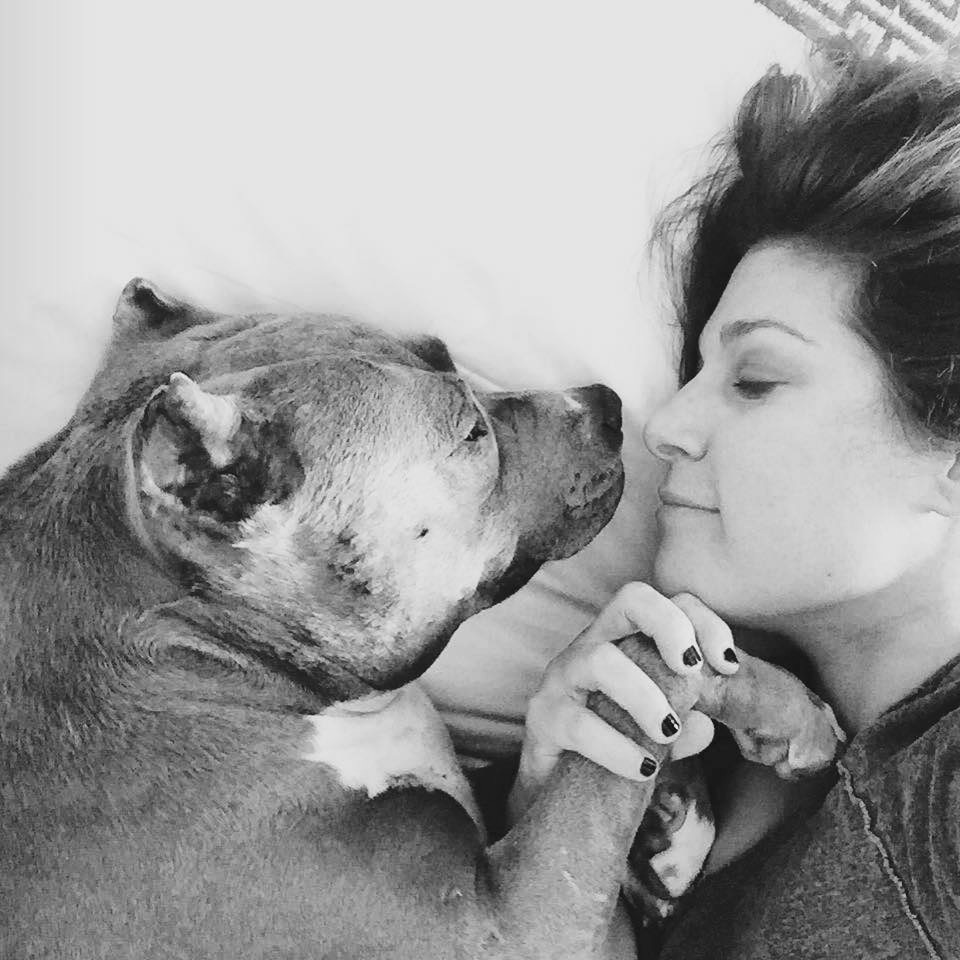 If you would like to get involved with the Stand Up For Pits Foundation, you can attend their events.  If SUFP does not come to your city, you can donate and purchase merchandise.  Share Rebecca Corry and SUFP’s posts.  Educate others, send people to the SUFP website, and encourage people to take action in any way they can. 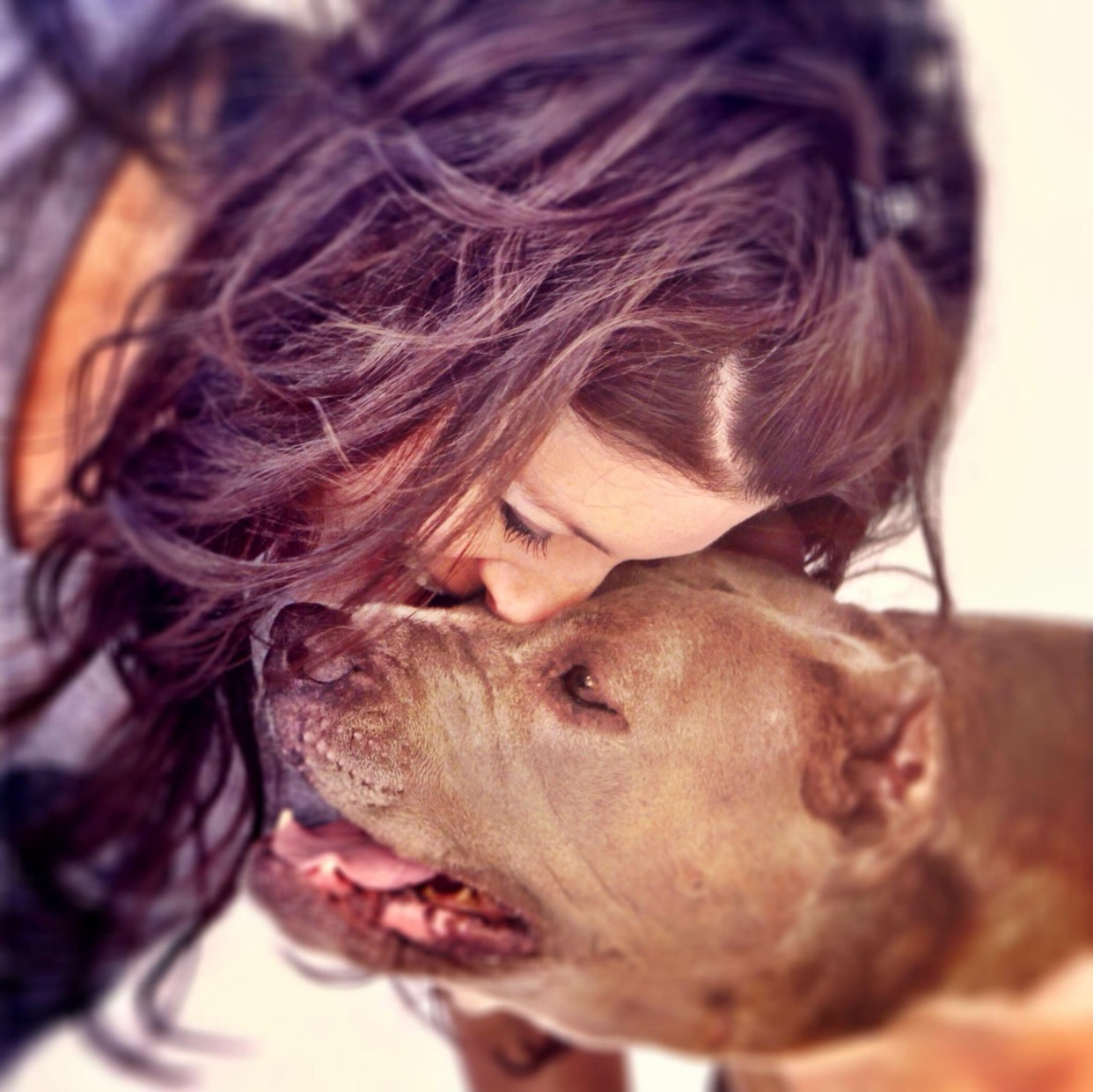