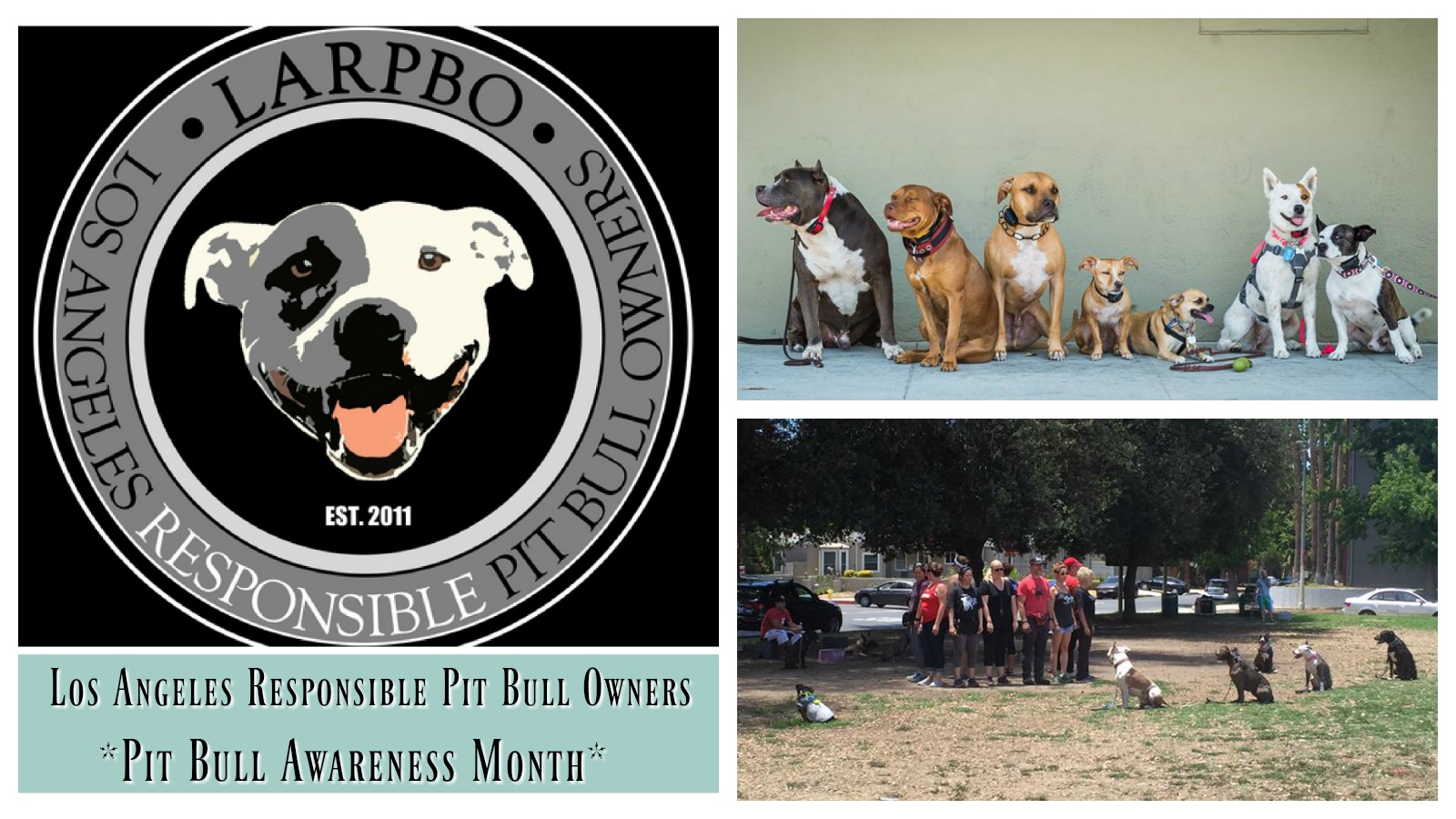 “LARPBO is committed to educating the public about responsible pit bull and dog ownership, and banishing the myths that the media feeds the public. We actively work together to share the truth about bully breeds: they are very loyal, loving, intelligent dogs who are amazing and wonderful family pets. Just like any dog, given proper obedience training, socialization with humans, and appropriate interaction with other dogs, this breed defies media misconceptions. By promoting attention and communication between dogs and owners we can show the general public what we already know: these are amazing creatures deserving of full and happy lives.”

Los Angeles Responsible Pit Bull Owners (LARPBO) started in 2010 as a Meetup group for people that simply liked to walk their dogs together. Over the past six years, it has transformed into a fully functioning, Non-Profit organization supported by the community, including volunteers, Parks and Recreation, and its over 1,580 active members. 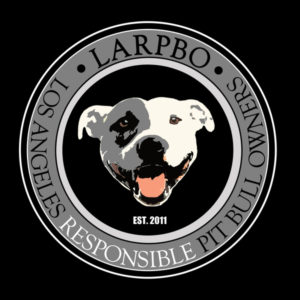 Troy Smith founded LARPO to help promote happy, healthy, well balanced and trained Pit Bulls. He was inspired to start the organization when he rescued his first pit bull, Tito, who taught him the true meaning of perseverance, forgiveness, patience, loyalty and love. Because of him, Troy wanted to create a community; a place for people to socialize their dogs in a controlled and safe environment and provide education and support for a very misunderstood breed. 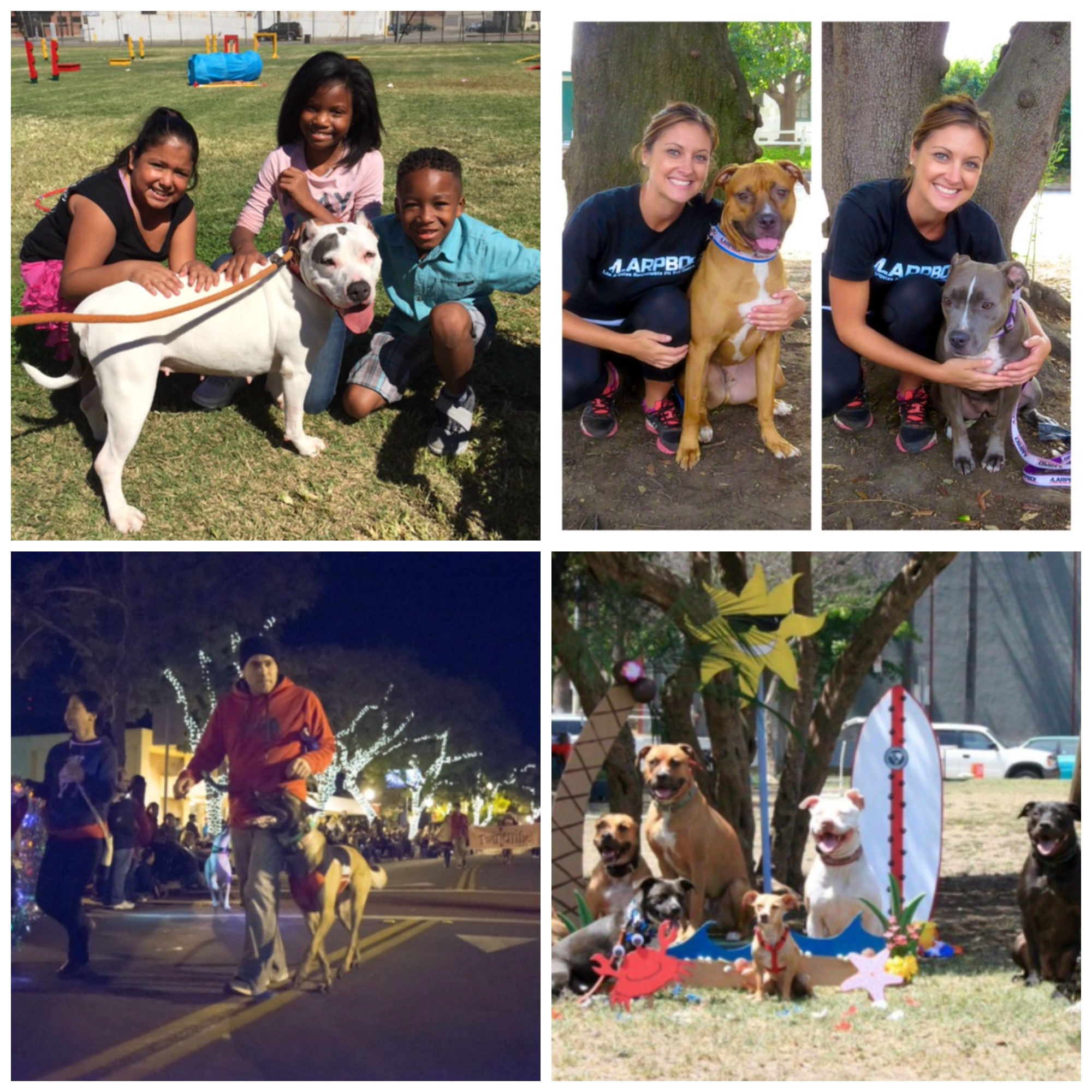 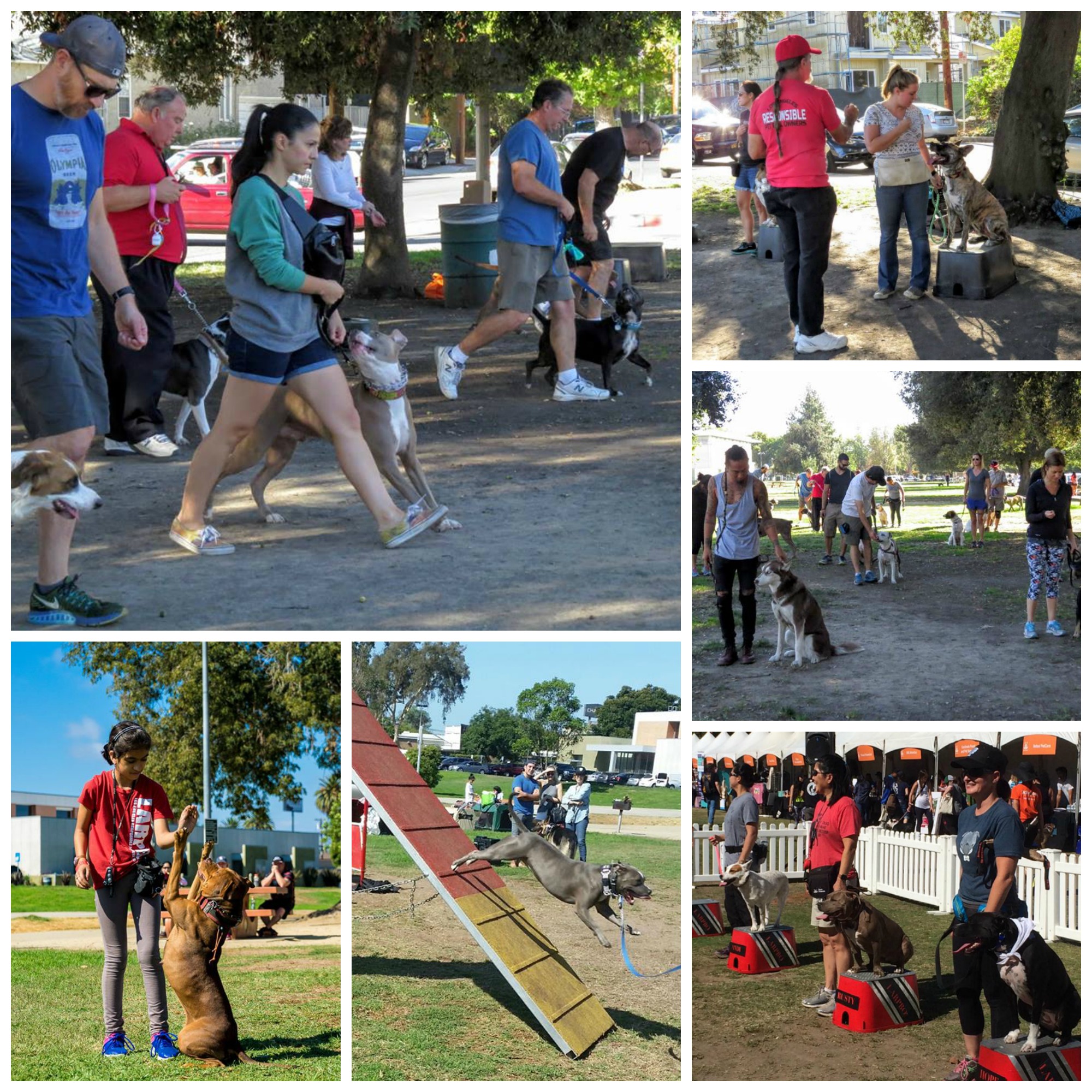 LARPBO’s training methodology is based on four basic concepts; motivation, reward, attention and communication. These concepts are applied through four basic commands; sit, down, come and place. You will practice these through the use of lots of positive engagement, confidence building tools, agility equipment and most importantly, fun! LARPBO believes that these are the foundations to help create a well balanced and happy dog.

Troy has been the head trainer at LARPBO for six and a half years. Prior to that, he spent time training with Sit Means Sit Dog Trainers out of Las Vegas, as well as Michael Ellis School for Dog Trainers out of Northern California. However, much of what Troy learned and practices today has been self taught. He thinks one of the most important traits of being a successful dog trainer is being adaptable – what works on one dog may not work on another, so you have to be able to adjust to each dog and their unique personality. 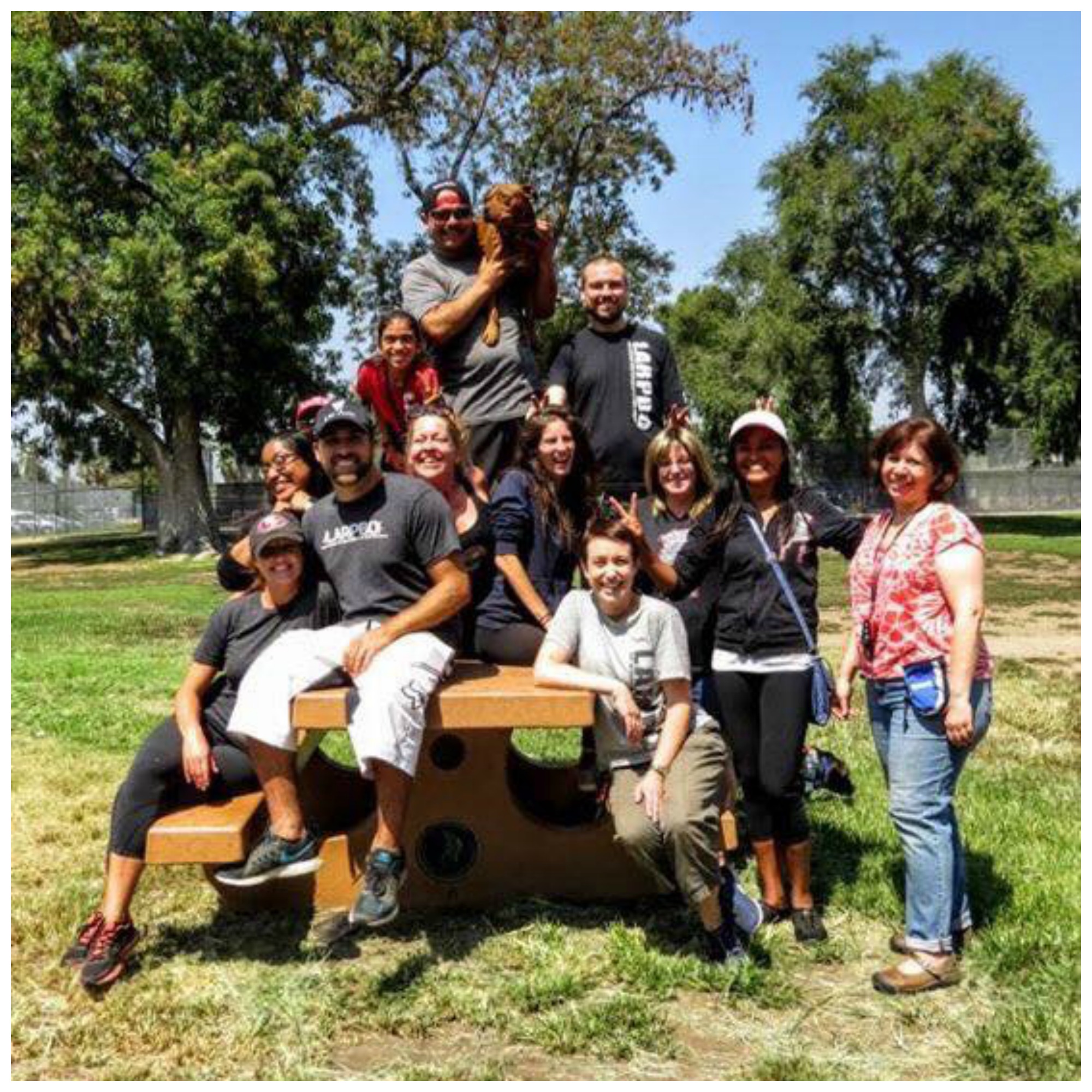 Along with Troy, LARPBO has a dedicated and loyal leadership team. They each fell into their roles naturally, as they wanted to be a part of what Troy was building. Mostly, they were previous or existing LARPBO members that had been through the program, witnessed the positive effects themselves, and wanted to give back and help others. There’s no way LARPBO could function without it’s volunteers! 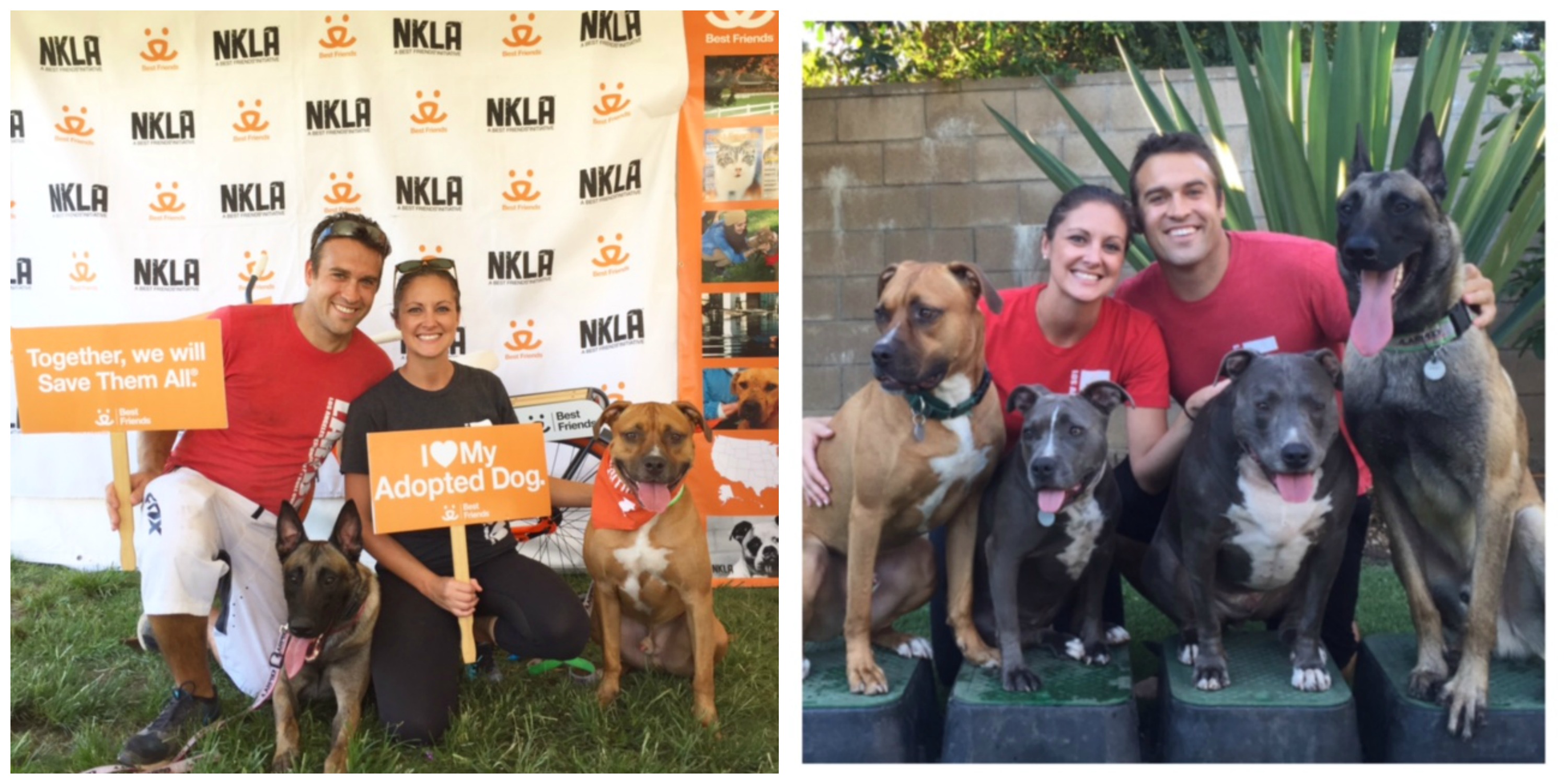 While LARPBO is not a rescue group, they promote the importance of spaying and neutering all bully breeds, as well as rescuing and re-homing. LARPBO also works with rescues and shelters to help provide resources for pre and post adoptions. You can often find LARPBO members volunteering at Wags & Walks adoptions and participating at dog events like Strut Your Mutt, Wiggle Waggle Walk, Hawthorne Pet Extravaganza and Orange County Pet Expo, to name a few. The more LARPBO can do to help educate and advocate the public about pit bulls, the better! 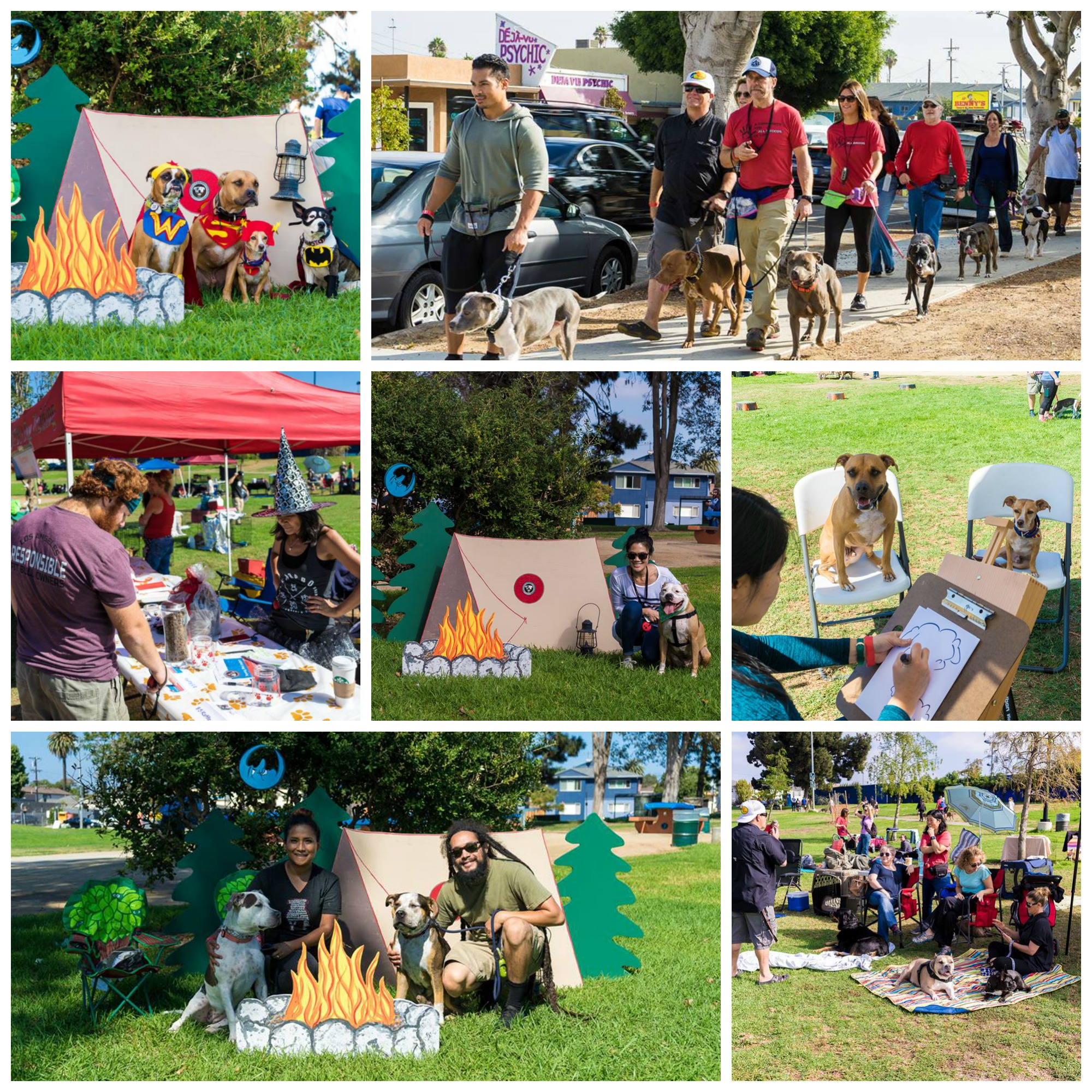 This year, LARPBO celebrated National Pit Bull Awareness Month on October 15th at Westchester Rec Center. It was an incredibly fun event for both two and four legged members. The day started off with a giant pack walk, followed by a picnic lunch, an agility course, a mini group class, and an advanced class demonstration. There was also an opportunity to win all kinds of great prizes by participating in a Halloween costume contest, trick contest, silent auction and raffle. LARPBO is already looking forward to next years event!

Troy and his wife, Annika, have three pit bulls: Cash, Harley, and Sloane.  Cash, a four year old American Staffordshire Terrier mix, was rescued from Devore shelter about three years ago and today, has earned his CGC (Canine Good Citizens Certificate) and has competed in various dock diving events. Cash loves to play with all his friends and spends most of his free time either napping or swimming laps in his family’s pool.  Harley, a four year old blue ‘pocket’ pit bull, was also rescued from Devore shelter about 3 years ago and has earned both her CGC (Canine Good Citizens Certificate) and CGCA (Advanced). She loves to play catch, snuggle up on the couch and will do about anything for treats. Sloane is a four year old white Pit Bull terrier who is a recent foster fail, and the newest member of the family.  She is a total love and thinks she’s a 60lb lap dog.  They also have Skar, a two and a half year old Belgian Malinois, who thinks he’s a pit bull, too.

Troy says that “Sadly, many have come to associate violence and aggression with pit bulls, which is often reinforced through misrepresented media. When people are bombarded with negative headlines about pit bulls, it continues to perpetuate these negative stereotypes. Unfortunately, the largest problem isn’t the breed itself, but the lack of education about them. A pit bull is just a dog, and no more likely to unpredictably attack than any other breed. So, until we change peoples’ attitudes, pit bulls are going to continue to be judged and subjected to unfair treatment. There are more pit bulls in shelters than any other breed, they’re less likely to be adopted, and they’re far more likely to be euthanized. So, as pit bull owners, we all have a responsibility to make sure our dogs behave well in public in order to help alter that perception. LARPBO’s hope is that one day people will be able to look beyond the stereotype that we as humans have created and see a smart, loyal and loving companion.”

The response to LARPBO has been extremely positive. The group is consistently growing and expanding, and the majority of their members come to LARPBO via referrals and word of mouth.  If you would like to get involved with LARPBO, you can attend class and spread the word!  Classes are held in Sherman Oaks every Saturday at 9am and Long Beach every Sunday at 10am. Join their Meetup group and learn more: LARPBO on Meetup. Feel free to email volunteer@larpbo.org with any questions about dog training, volunteering or donating to a great cause! 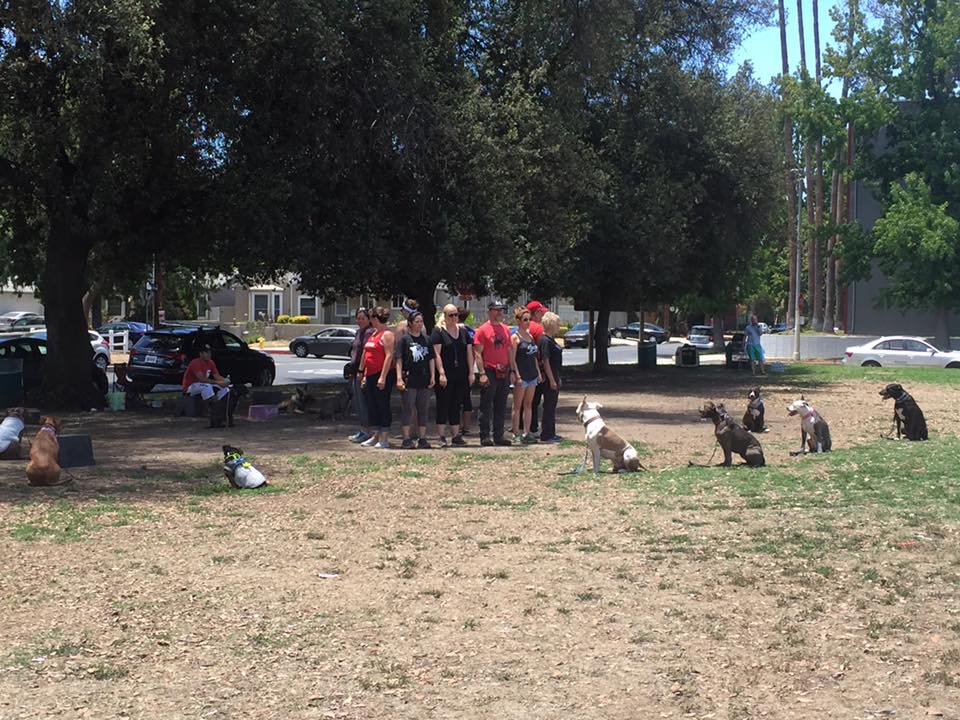