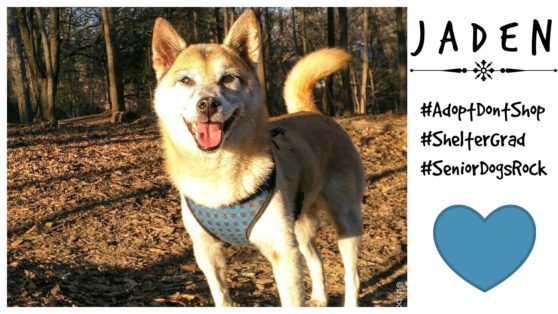 Andrew and Lizz decided that they wanted to adopt an adult dog, as they both work full time and have a son, Justin, in 4th grade. After some discussion on breeds, they came across the Shiba Inu. They were drawn to this breed partially because they look so similar to foxes. Not knowing much about Shiba Inus, they did some research and contacted a few Shiba Inu rescue groups. They actually got a lot of run around and unanswered emails and they became discouraged, so they stopped the search for a few months.

One morning, Andrew randomly came across a site, nationalshibarescue.org, which is not a rescue group, but a website that compiles Shiba Inu adoption ads.   Andrew and Lizz saw a post about a 13 year old female Shiba Inu need 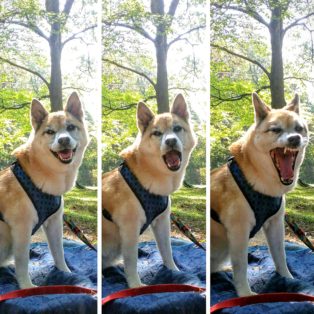 ing a new home and it had a local phone number listed. After a little discussion about whether a 13 year old dog would be too old for them and Justin, Andrew called and left a message. A few hours later, they received a call back from the dog’s foster family and they agreed to meet later that afternoon.

Andrew, Lizz and Justin met the foster family and the rescue dog, Ja 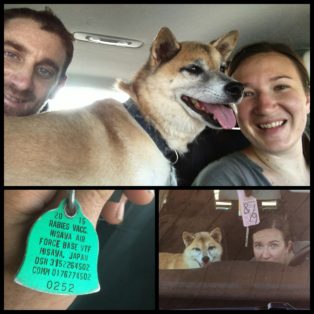 den, at a local park. They spent about 45 minutes walking and playing with her. They were amazed that even at 13 years old, she still had the energy of a dog half her age! Her eyes were full of life, she had a big smile, she listened well and her tail did not stop wagging! There were no questions — she was perfect! They gave Jaden her forever home that evening!

What they know about Jaden is that she was adopted by someone who was doing military service at the Misawa Air Defense Base in Misawa, Japan. The base is a joint venture between the US Air Force and the Japan Air Self Defense Force, and is about 400 miles North of Tokyo. Jaden flew to the United States in early 2015 with her owner. They were told that the owner was re-deployed shortly after arriving in US, and sadly, was not able to take Jaden along. 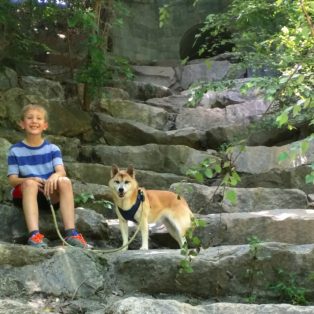 Jaden was very healthy for a senior dog!  She was a little underweight, but her biggest issue was that she had a few teeth with bad cavities. Jaden’s vet ended up extracting 7 teeth! She had a rough couple days recovering from anesthesia, but was back to her normal self in no time.

She has been an absolute joy to share their lives with! At the end of August, Jaden will have lived with her forever family for a year, and they look forward to many more healthy and loving years together!

最近ジェイデンは、日中はベッドの下に眠るために始めています。何故かはわからない。たぶん彼女は暗いが好き？- The past few days, I’ve come home to find Jaden sleeping under the bed. It’s a new thing for her, as far as I know. She is 13, we’ve only had her for 9months now. Not sure if it’s a security thing or if she likes the darkness. The house is quiet and cool during the day. #sillyshiba #shibainu #shibajaden

We played catch the ball at the park today. #shibainu #shibajaden #shiba #dogpark

The weather is warm tonight for Shiba patrol. We had a pleasant walk., the neighborhood was calm. #shibalove #shibainu #shibajaden #shibapatrol

Long day of play, now I will be comfortable laying here.