In late 2012, a 4 month old Bull Terrier/Bulldog mix was found wrapped in a blanket in a port-a-potty on a construction site.   The fisherman who found him took him to a local animal shelter, and shelter staff named him “Buzzard Bait,” because of the condition he was in.  A volunteer at the shelter contacted a local rescue,  Triumphant Tails.  Set to be euthanized at the shelter, Triumphant Tails immediately came to the rescue.

Buzzard Bait then started to receive treatment for a severe case of demodex mange,  a severe secondary skin infection and possible chemical burns.  Buzzard Bait recovered in a foster home for four months.  Because of his appearance, there was very little interest in adopting him.  Then, the veterinary clinic where he was treated posted his picture on their Facebook page.

South Houston resident, Danielle, saw Buzzard Bait’s picture on Facebook and immediately fell in love. Initially, Danielle called the veterinary clinic and offered to donate to his care.  They suggested that she consider adopting him, and because Danielle saw something in Buzzard Bait’s eyes, she started the adoption process.  After a thorough background check by Triumphant Tails, and pending a home check, Danielle was approved to adopt Buzz.  Buzz visited Danielle’s house, and even though he was nervous and still in rough shape, his tail didn’t stop wagging and he had plenty of kisses to give.  Buzzard Bait had found his forever home…and had four new fur siblings!

Danielle shortened Buzzard Bait’s name to “Buzz.”  He loves doing tricks, and prefers to snuggle on the couch or bed.  Buzz is loving, gentle, affectionate, and helps Danielle in shattering the negative stereotypes about pitbulls and pitbull mixes.  Buzz also helped “rescue” Danielle.  She suffers from an auto-immune disease, so normal, daily activities can be difficult for her. Buzz is always by her side and gives her the strength she needs.  She can’t imagine her life without him, and believes they are soulmates! 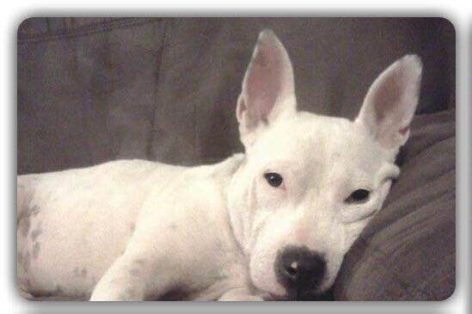 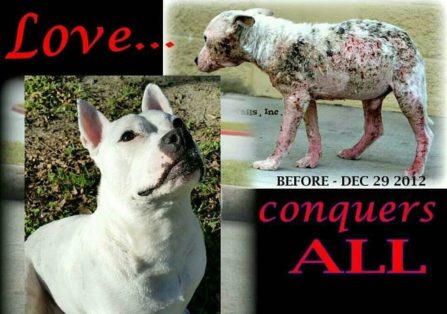