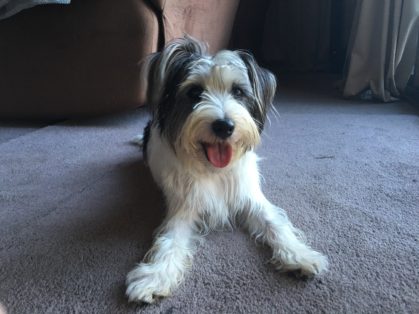 After Megan’s fur-baby, Bridget the Bichon, passed away, she knew that when she was ready for another dog, she would adopt. Megan wanted a small dog that didn’t require too much grooming, but who also had a big personality and could play with Megan’s parents’ rescue dog, Xena, a Sharpei/Lab mix.  When Megan was ready to adopt, she went straight to the website for PetRescue, which features all adoptable dogs from every rescue group in Australia.

Megan would check the website daily, searching for the right dog. After a few months, a little Terrier mix named Ewok popped up on her computer screen.  Ewok was a 14 week old puppy, and he was being fostered through a rescue group called Fraser Coast Pet Warriors. The rescue group had about 10 Terriers up for adoption, all with different rescue stories.  For some reason, Ewok stood out to Megan, but since she was going on vacation in a few weeks, she knew it wasn’t the right time to adopt.

The day before Megan went on vacation, she decided to check the website to see if Ewok was still available for adoption.  To her surprise, he was, and he was the only Terrier puppy left from the group of 10.  She thought it was fate, so, she immediately called Fraser Coast Pet Warriors.  Ewok’s foster family was more than happy to continue fostering him until Megan came back from vacation.

Two weeks later, after Megan returned from her holiday, the rescue group put Ewok on a plane to meet his new mom.  He flew about 40 minutes from Harvey Bay to Brisbane and was finally in his forever home!

Ewok is smart, goofy, playful and very inquisitive.  He’s everything Megan had hoped for and makes her world complete!!