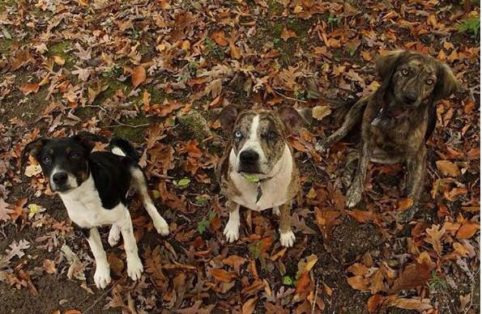 Ashley’s first rescue dog, Thor, needed a playmate. Ashley visited shelters and rescues in her area and met many dogs, but for some reason she couldn’t find the right fit for her family.  Late one night, she came across a photo online of a Boston Terrier/Catahoula Leopard puppy, and fell in love instantly.  Ashley and her mom drove to the rescue to meet the puppy, and they gave him his forever home! Ashley named her new fur-baby ‘Hammer,’ and he and Thor bonded immediately.  Sadly, a few months later, Thor passed away.  Ashley knew that Hammer missed having a playmate, so after a few tough weeks, she began searching for another dog to adopt.

Ashley and her mother went to the nearest shelter and spotted a beautiful Labrador puppy.  At the time, she didn’t have enough money to cover the adoption fee, so she waited a week and went back to the shelter to adopt the Lab. When she got there, she found out the puppy was already adopted out.  Ashley waited in the shelter lobby while her mom looked at the other adoptable dogs.  A staff member approached Ashley and showed her a picture of puppies that were recently rescued at another shelter.  She and her mom drove across town to meet these new rescue pups.  Ashley adopted a tiny black and white pup from the litter of three and named her ‘Gypsy.’

Shortly after adopting Gyspy, Ashley was browsing Petfinder.com and saw an adoptable dog that was the spitting image of her first rescue, Thor.  They looked identical and Ashley knew it was meant to be!  She and her mom drove to meet ‘Lucky’ (her name at the time).  As soon as Ashley walked through the door of the rescue and saw Lucky, she nearly broke down.  It was as if Ashley was looking at Thor again.  Ashley learned that Lucky was found at a campsite, under someone’s trailer.  Lucky was emaciated, hairless, and so fearful of everyone and everything.  Ashley adopted ‘Lucky’ and renamed her ‘Mama Day,’ because she truly believed that her new rescue dog could have been Thor’s mom.

Thor meant the world to Ashley.  Even though she was devastated that he passed away, she knew he opened the door for her to find three new rescue dogs to love.  Hammer, Gypsy and Mama Day are Ashley’s best friends and her children, and adopting her three happy mutts was the best things she’s ever done!