In February of 2002, the Jacobsen family adopted Cody, a Lab X, from the Dorchester County Animal Shelter in Cambridge, Maryland.  Cody was a great dog, who lived a long life with the Jacobsen family until March of 2014.  The Jacobsen family took Cody’s death pretty hard.  His Mom didn’t want to adopt another dog because no one could replace dear Cody.
Cody’s Dad and brother wanted to re-adopt another rescue animal very soon after Cody’s passing, which was really hard for Cody’s Mom.  Around that same time, Cody’s brother started watching “Pit Bulls and Parolees,” which had already been on TV for several years.  It was then that the Jacobsen family started admiring Pit Bulls.  Pit Bulls had been given such a bad rap by the media, so we were somewhat afraid, but all the dogs we would watch were such good dogs, who just needed the right people to raise them.
Cody’s Dad works for Sparkletts which is around the corner from Pet Orphans of Southern California in Van Nuys.  Cody’s Dad would sit parked in his work truck on Gloria Street and see all the volunteers walking dogs.  He tried for months to get Cody’s Mom to go to take a look, but she was still hesitant.  We started following Pet Orphans on Facebook and watching the featured dogs each week.
In the summer of 2014, we finally went and took a look at Pet Orphans.  It didn’t take long for us to find our second beloved pet.  Katherine was a 6 year old Pit Bull/Lab mix who had been surrendered by her family to the Shelter in Downey, California.  Pet Orphans was able to pull her from Downey after she had been there several months and no one had adopted her.  Katherine was with Pet Orphans for a few months before we found her.  She was very excited to see new people and be out of her kennel at Pet Orphans.  It was very hard to tell how she was going to be at home with us because she was very excited to be on a leash, she wouldn’t make eye contact, which had me a little bit worried, but once she got home with the Jacobsen family, she started to relax and settle in.  She had to learn how to climb stairs.  I don’t think she ever had stairs before, but she learned quickly.
Katherine had a skin allergy which Pet Orphans had corrected by putting her on a seafood only diet (no meat).  We have continued that diet with Katherine and she has had no skin problems at all.  We’ve also found a person nearby who makes homemade vegan dog treats, which Katherine will sit in front of the fridge and stare at me until I give her one.
Within a few months we had taught her how to sit, shake hands, stay, “watch me,” and a few other commands.  Walking on a leash took some time, but she really does well now, with the exception if the little dogs torment her, but we are still working on “leave it.”
It has been almost 2 years now since Katherine joined our family and she is completely settled in.  She loves cuddling with us on the couch.  No dog beds for Katherine; she wants no part of it.  She has her own bedroom and full size bed to herself.  She has lots of toys, which we find in all different parts of the house.  When I put them away, she gets upset and puts them all back in the places she wants them.
We are so glad we found Katherine and I think she is very content to spending the second half of her life with us; we wouldn’t have it any other way.  She just needed for someone to give her a second chance and we were destined to be together. 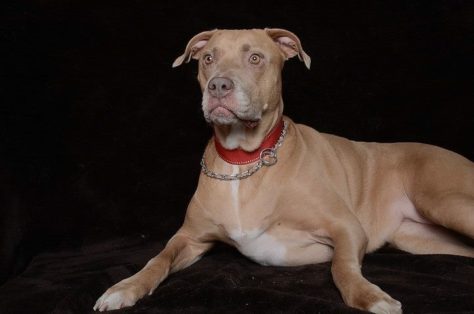 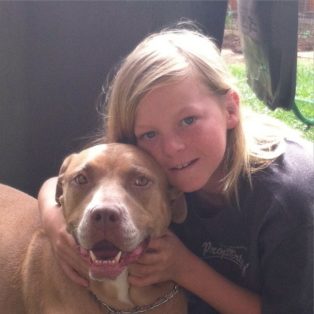