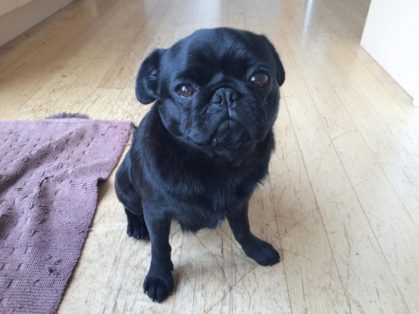 Peggy is a rescue Pug from Geelong, Victoria, Australia.  She was surrendered to a local shelter as a stray. Peggy was clearly neglected in her previous “home.”  She was underweight, her coat was coarse and dull and both ears were infected.  Each of Peggy’s mammaries were saggy and over used, and because of this, she had mammary tumors.  She was very fearful, skittish and submissive, but despite all this, she just wanted to be held in someone’s arms and loved.  The shelter believed that Peggy was a puppy mill escapee, and even though she was only 2 years old, she appeared to have numerous litters of puppies.
Local resident, Ali, works at the shelter that Peggy was surrendered to.  When Ali saw Peggy, it was love at first sight!  After some rehabilitation and lots of love and attention, Ali adopted Peggy!
Peggy is loyal and never leaves Ali’s side.  She has a very sweet disposition, and has quickly bonded with her fur siblings – one dog, and one cat.  Even though she’s still submissive when she meets new people and other dogs, she warms up to them very quickly.  Thanks to Ali, Peggy is becoming more and more confident. Peggy knows she is safe and loved in her forever home, and just wants to cuddle with her mom all day!!
Follow Pretty Peggy On Instagram @iampeggythepug