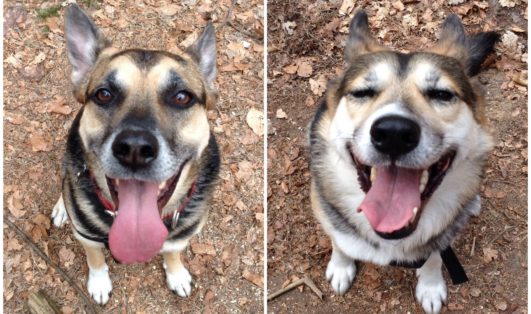 In late 2013, Tomasz started thinking about adopting a dog.  He began to compile a list of names for his future rescue pup, and decided on ‘Suchar,’ which means ‘biscuit.’  A few weeks later, Tomasz started volunteering at a local, no-kill shelter in Gdynia, Poland. He took a tour of the facilities, and one of the first dogs he saw was named — wait for it — Suchar!  He was a German Shepherd mix, who was rescued by the shelter in 2012. Tomasz knew this was meant to be, but he also knew that adopting a dog was a big responsibility, so he did not rush in to anything. He continued to volunteer at the shelter, and after about two months, and many walks together, Tomasz gave Suchar his forever home.

In 2015, the shelter rescued Dynia (‘Pumpkin’), a Husky/German Shepherd Mix.  Tomasz was still a volunteer there, and though Dynia was very shy, she let Tomasz take her for walks.  While on one of their walks, Tomasz noticed that Dynia was wearing the same collar that Suchar wore while she was at the shelter back in 2013.  Tomasz knew this was fate, and a few weeks later, gave Dynia her forever home!

Tomasz believes that destiny brought all three of them together, and this is why he decided to keep their shelter names.  He can’t imagine his life without his Biscuit and Pumpkin!
Follow Fur Siblings Suchar and Dynia on Instagram @suchardynia