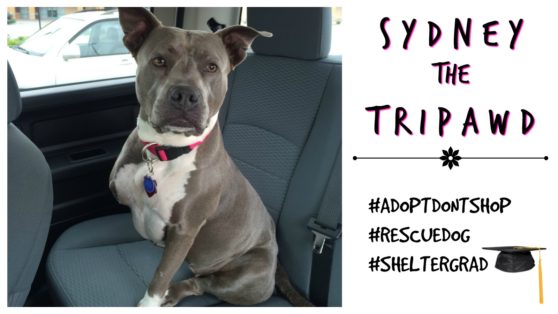 After losing their two canine girls from old age within 2 months of each other, Rick and Robin were beyond heartbroken and knew that it was time to rescue another dog in need. 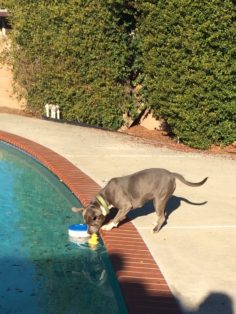 Rick went on a search to find a new fur-baby that they could bring home. He found “Skid” on the Rotts of Friends website, and immediately sent her intake photo to Robin. Robin fell in love with Skid IMMEDIATELY!
Robin called Renee, who owns the rescue, and they spoke about adopting Skid.  They also discussed when she and Rick would be able to make the 420 mile drive to Woodland, CA. Skid still had a lot of healing to do; she was hit by a car and dragged.  Her little body had tire marks on it and her rescuers named her Skid.  The previous owners either refused, or couldn’t afford her treatment, which required surgery of a compound fracture to her front, right leg.  Two days later, they finally surrendered her and it was determined that she had a horrible infection. Skid’s leg had to be amputated, and she also needed to be spayed.  Robin and Rick suspected that she had a litter of puppies at some point in her life.
The name “Skid” brought on too many negative thoughts, so they renamed her Sydney (and call her Syd, for short). Since bringing Syd home, she has become stronger and stronger!  At first, she couldn’t sit.  Now, she sits like a queen! Her favorite things to do are play ball, hike and play with her brother, George. She LOVES to sleep in and get her daily back massages, as her pawrents know only having three legs brings more stress on to her little body. Sydney is so full of love and her furever family feels so blessed to have rescued her!! 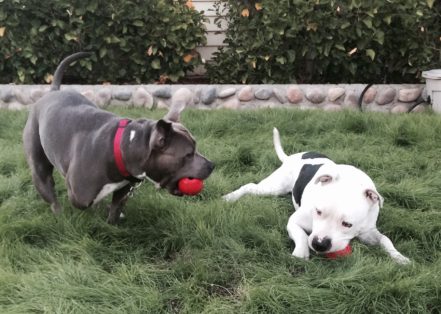 How do your tripawds like to eat? #tripawd #tripawds #tripawdsofinstagram #tripawdsrule #adoptdontshop #rescue #pitbull