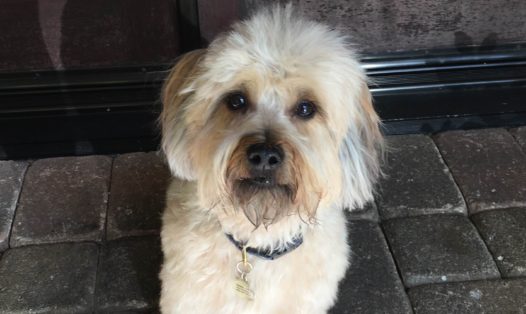 In September 2014, Shani’s 14 year old Wheaten Terrier, Zoey, was diagnosed with terminal lung cancer. Zoey had been with Shani and her family since she was 8 weeks old.  They loved her dearly and were absolutely heartbroken. While Zoey was undergoing treatment, Shani saw a picture of Tanner (who was named Harvey at that time) on Last Bad Day’s Facebook feed.  She learned that Tanner, who was a puppy, had been brought to the East Valley Animal Shelter as a stray, and Last Bad Day immediately rescued her.  In Last Bad Day’s Facebook picture, Tanner looked just like Zoey had looked when she was a puppy. Though Shani and her family weren’t looking to adopt another dog at the time, they knew that they had to give Tanner his forever home! Shani contacted Last Bad Day and made plans to meet Tanner as soon as possible.

A few days later, the whole family, including Zoey, went to meet Tanner.  In real life, Tanner didn’t look like puppy Zoey, but he was sweet as can be, and Shani’s son immediately fell in love with him. He wasn’t exactly what they were looking for — they swore they’d never have a puppy again, they wanted only female dogs, and they preferred bigger dogs.  However, there was just something about Tanner, and there was no doubt that he had found his new family!  He sat on Shani’s son’s lap during the car ride back to their house and slept in her son’s bed that night. They were immediately bonded to each other.  Shani and her husband fell in love with him, too, though they were more focused on Zoey at the time.

Sadly, Zoey died 10 days later. It was a very, very tough time for Shani and her family, but having Tanner with them brought humor and levity to their home at an otherwise bleak time. They love Tanner to pieces, and truly believe that Zoey brought him to them. Zoe made sure her family was taken care of after she crossed the rainbow bridge.

This handsome face is Tanner’s, but I recently discovered he looks a lot like fellow rescue mutt @tacoroscoe. ???? QOTD: do you have an IG doppelgänger? ???????? #rescuedogsofinstagram #pedigreerescues #rescuenation #muttsofinstagram #scruffysquad