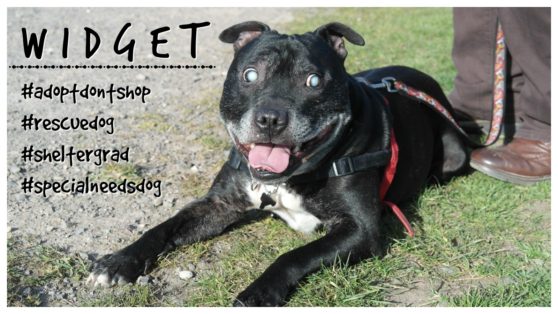 Chris and Justin wanted to adopt a shelter or rescue dog. So, in August 2015, they visited Cardiff Dogs Home in Wales, UK. But they didn’t “click” with any of the dogs there. As they were leaving, a foster volunteer was walking a friendly Staffy named Widget, who captured Chris’ and Justin’s interest. Something seemed odd with Widget’s eyes and the dog walker asked, “How do you feel about the unusual?” Widget was blind. Before this day, many visitors got interested in this friendly dog, but once they saw Widget’s eyes they were put off.

But not Chris and Justin. They took Widget on a walk and then they spent a lot of time with him in the sensory garden. Widget won them over with his loving and laid back attitude. It was love at first sight (pardon the pun) and they immediately adopted Widget!

Chris and Justin quickly started researching blind dogs and how to properly care for them.  They made sure their home was as friendly as possible for Widget. Within hours of bringing Widget home, he had mapped out the house and explored without hesitation.  Chris and Justin often forget he’s blind because he’s such a natural navigator and is always confident when he goes on walks! 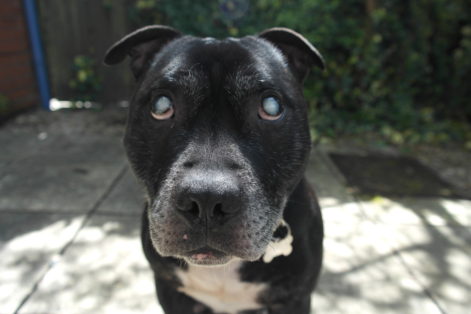 There were very few details about Widget’s previous life. Maybe he was blind from birth and was abandoned by his previous owner. At Widget’s checkup, the vet diagnosed that his blindness happened gradually and could have been prevented, had his previous owners treated it.

Even though Widget is blind, he doesn’t seem to know any different. He is very trusting and loving.  He has truly adapted to his disability and has bought so much love to Chris and Justin’s home!