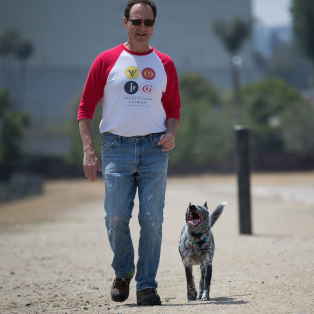 This post is sponsored by Tailspring. My first encounter with goat milk was as a newborn human. No joke. My neonatal pediatrician told my parents that goat milk would help jumpstart my good health. And look at me now as a healthy senior citizen. No joke. Most folks think I’m ten or twenty years younger—maybe it’s the goat milk? These days, I’ll occasionally buy goat milk for myself; it seems to calm my tummy and I enjoy variety. My local supermarket shelves carry Meyenberg (Tailspring’s parent company, which is based here in California). Plus, I was born under the sign of the goat. No joke. I’m a Capricorn.

I wasn’t familiar with goat milk for newborn puppies and kittens until Tailspring and All Pet Voices reached out to me with Tailspring’s Milk Replacer for Puppies. I reviewed Tailspring’s health claims (Scroll down for Tailspring’s FAQ and links to health benefits) and talked with trusted colleagues, especially movie dog trainer Nicole Ellis (Interview with Nicole is below). I’m especially curious about using goat milk in shelters for nursing homeless puppies and kittens. Then I tried a little as a treat for my adult cattle dog Spider. He likes it. (use it in small amounts for adult dogs) I’ll give Tailsping my P-Woof Paws Up Approval.

Tailspring sent me their canned and powdered formulas. It’s all human-grade, so I tried it myself. I like it. It has a clean taste and is mildly sweet (No added sugar; that’s the natural taste). To be honest, I prefer it fresh from a carton for myself, but I wouldn’t turn away the canned or powdered. (Note to self: put the Meyenberg goat butter and goat cheddar on my shopping list.)

For adult dogs, goat milk is recommended in small amounts because of the lactose. I put a couple of tablespoons of Tailspring in Spider’s bowl to see if he liked it. Yep. So, with the rest of the can, I filled an ice tray and added a couple of blueberries (which Spider already loves, plus blueberries are anti-oxidants) in each cube. Then I sipped the rest myself. 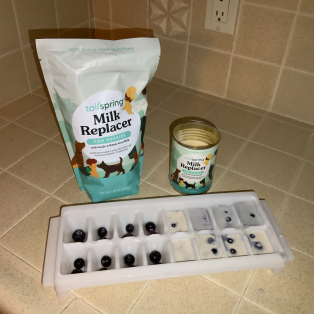 The next day, Spider and I took a long walk. Afterwards, I gave him an ice cube treat to help help him hydrate. The consistency of the Tailspring ice cube treat is harder than hard ice cream and softer than a water ice cube. He gnawed on it, then snarfed up the smaller pieces. Spider loved it and wanted more. (Note to self: include one Tailspring ice cube as a high-value dog training treat a couple of times per week.)

Maybe you know Nicole Ellis and her dogs, Maggie and Rossi, who have appeared in many print ads, commercials, TV shows, and movies, including ABC’s ‘Pooch Perfect’ series hosted by Rebel Wilson and the 2020 family film, ‘Think Like a Dog,’ on which my movie dog pal, Sarah Clifford was Lead Animal Coordinator. 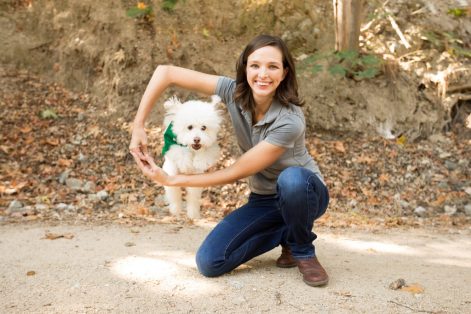 Nicole has been using goat milk with her own dogs and recommends it to all her clients who have puppies. She says, “Dogs love goat milk. They think it’s a treat.” Nicole uses the powdered kind once or twice a month, and always has it on hand. She gave me the idea to put blueberries in the goat milk ice cubes. Nicole is a big fan of goat milk and helped me understand the importance of the new Tailspring goat milk-replacer for puppies.

My bottom line about goat milk